We’ve heard your requests and want to let you know that we will be adding an RP-PVP realm in North America for WoW Classic. The comments, feedback, and passion from so many of you about this ruleset has been truly inspiring, and we’re happy to make RP-PVP available for you!

WE DID IT FRIENDS YEEEHAAAAAAA

Hello everyone, I would like for everyone here to post, something as to add how they feel about RP PVP realms most likely not being added at start of classic.

My goal isn’t to nag yell or cry about this, but ask blizzard to reconsider there stance, i feel that if this post is bumped enough with enough likes. RP-PVP servers, will be in some way helpful to everyone. We are only asking for a single server for this, nothing more nothing less, two would be grand, but we’ll take what we can get.

RPers, who enjoy more random PVP aspects of the game are affected by this and i doubt any PVPERS wants a roleplayer in there AB or WSG when trying to rank.

Let us all, in a respectful and mature way try to get a blue post explaining if there is anyway we can change there minds, and if not what actions can we take to make it happen?

(If some one would like to reach out and help the cause and create a Reddit or whatever media outlet blizzard uses) To help that would be grand.

Thanks to this random person for the clip on this, and those who linked it in the forums

What is the difference between RP-PVP to RP you may ask? Well here you are some info!

Generally, an acronym for "Role Playing plus Player vs Player". A type of Realm in World of Warcraft that combines the RP and PvP rulesets. This is the new server type (as of 1.8) which combines RP and PvP into one server: RP behavior rules. PvP...

Timeline of the creation of US realms

This is an ongoing list of all realms that have been created since the release of World of Warcraft on 11/23/04. Each realm can be found under a heading of the day that it was released. This list may help you if you're trying to figure out when a new...

These are all changes within the 1.1 - 1.12 time frame, these where and are server types that happened in Vanilla, though later they are still part of the experience, even if some folk never got around to them. 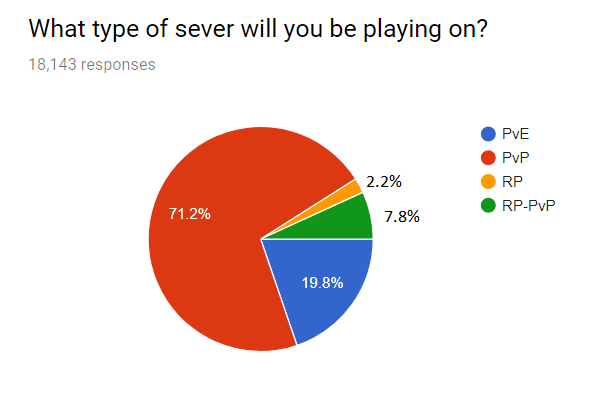 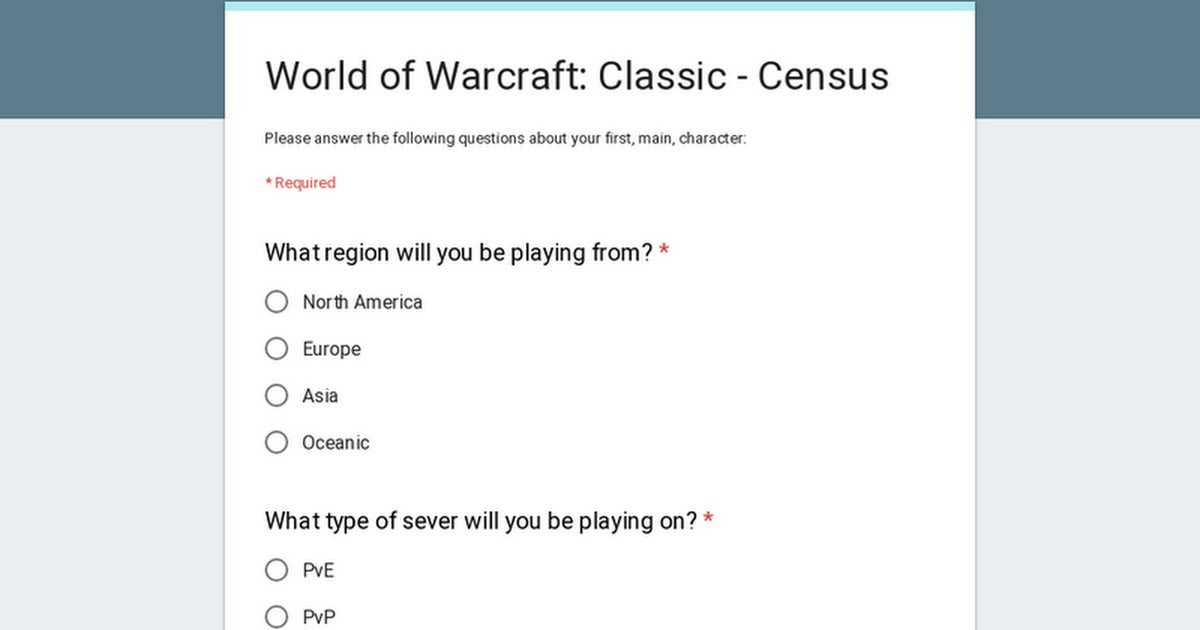 Here is the survey used for the part chart above, if you would like to take it yourself please do it has over 15k responses.

Please answer the following questions about your first, main, character:

Here are the results as well if you’re curious.

Even in the other side of the word the cry for RP-PVP servers is not dead, Our comrades in the EU forums clammier with ours!

Rp pvp servers why it should be there blizzard! + POLL

So, since we heard there will be a “maybe” on RP-PVP servers. Our minds exploded, why wouldn’t you ad 1 simple RP-PVP server or even more with the thousands and thousands of people that do want to play on such a server? Also adding an RP-PVP server...

It seems some one from the EU forums put up a petition, if you want to go the extra mile support here lol, looks like they’re only trying to get 100 and it’s filling fast.

The petition now has over 2.200+ signatures great push everyone. Clearly there’s something to it.

PS: I can’t find US archives, but these work as well those who are curious on the O.G realm differences.

I add myself to this petition. Please give us RP-PVP realms… as a player who enjoys both It’d feel really bad to have to choose between them.

In my particular case I’d choose PvP over RP, but that’s giving up on a rich part of the game which I enjoy very much…

All this time, I was under the assumption, “Of course they would have Rp-Pvp servers”.

I am kind of shocked.

No Old AV… No Rp-Pvp server I was intending to roll on ;(

I don’t RP at all, but I understand there is a big following out there for it. I’m all for it, it can’t hurt anything.

Edit: Glad to see people got their wish. It’s amazing to me how much all of you love this game! Kinda considering going RP-PvP now, but not sure how it works. In any case, see you all in Azeroth!

We took RP-PVP Servers for granted, and it was our mistake! We must bump and spread our voices so Blizzard will give us the Blood thirsty roleplay we want!

Considering there will undoubtedly be a gradual roll out of servers to prevent over creation of servers, I think the best way to ensure you get an rp-pvp server is to make RP servers popular. I don’t know how many people, given the sophie’s choice of “rp” or “pvp” would choose the RP though.

I don’t even play on rppvp realms but it seems silly to not have at least 1 for the US? Surely they could populate at least one of those.

Personally, i didn’t play on RP-PVP servers to much back in the day, i am however or possible was looking forward to, few people around here and other place’s have been getting discords and guild chats together to plan on rolling onto it.

I’m sure they’re willing to move to a RP server if no RP-PVP servers are provided, but there is 0 harm in making a RP PVP server.

There may be some downside to not having one, I for example loved going to Elwyin forest on my lame 34 tauren druid and just killing NPCS from time to time, i was a dumb kid sure. But this isn’t the most friendly thing to do, at least on a RP pvp server this is more justified, then just borderline griefing and trolling.

I doubt anyone on a Normal and PVP server want to have there quest giver killed… Will this happen to you anyway? Sure, BUT! Having RP-PVP servers may reduce the chance even slightly! You lose nothing from support the idea either way.

RP-PvP is the server type that I’d roll on, given the chance. I hope Blizzard reconsiders this prior to launch.

If it happens post-launch then I doubt I would bother unfortunately, as I would have already joined a normal RP server and established myself there.

Agreed, i’m not rolling on there solely for RP or PVP they’re just there, i plan to raid myself. and have both those things there if i want it, but RP-PVP communities are still a great thing, and that’s the biggest drive for me.

If they don’t have them at start i will just sadly move to a PVP server, though even if we have one server and there are problems we may get more in the future, and people who built themselves up can move on and let there RP mates know this, instead of everyone just spreading out at the start and getting lost.

My 2 Coppers,
If we get ONE RP-PvP Server, it should be housed in the Central Data Server, that way, people ln the west coast and east coast have less Ping, rather than having a Server on the West Coast, and having horrible Ping if you are playing on the East Coast and vise versa

My guess : Blizzard don’t know how much RP people will play classic.
So maybe, they are holding it back to NOT split already not the biggest community in half. In this case PvE is a right choice.
Maybe they’ll add second RP-PvP server, if there are enough players to fill it.

But with enough words and post we can fix this, i’m not to sure about AV but we as a playerbase can do something about this if we just don’t idle.

I am Signing up! I also have an interest in RP PVP server.

From an RP perspective, I think RP-PVP makes more sense than an RP-PVE server. I realize that not everyone is going to want RP-PVP, but I think it should be included as a server type.

Unless of course I’m way off base in how popular I think Classic will be, and it would split the population too much. That being said, I think it should be an option for those that want it.

I’m not going to play if RP-PvP isn’t available at launch. My guild is going to be split up and I’m not for dealing with that drama, only to have to move servers later on. Omitting RP-PvP on launch is a flat out dumb decision.

I think this is a fair point, and it’s why i’m asking for a single or double RP-PVP servers and not more. A majority of people aren’t going to roll on a RP PVP server and main it, if they’re already established on a RP normal or PVP server.

This is disappointing and this is just a bad week for Classic news.

But also remember that we’re a community and we can do something about this on our own. We can’t bring back 1.5 AV, but we can select an unofficial RP-PVP server by picking an RP server to all roll on and typing /pvp exactly once. (Our PVP communities on Earthen Ring did this a lot, where we would just wander around permaflagged, as RP-PVP servers didn’t exist yet).

We might have to draw in bigger communities than this forum, but we could get it started here.