Just compiling all the “controversial” achievements so everyone can just look at 1 place for tips. I have included related links just to link back to the original source but if possible, let’s keep the discussions here too in order to make it consistent in consolidating the tips and strategies.

The only special request I make is that if you find out anything; tested anything; or have any hypotheses, please share it over here so that we can group think and theory craft further for everyone.

A new patch has been released addressing pretty much the rest of the bugged achievements.

A patch has just been released for most of the bugged achievements.

Thread will continue but the main post will not be updated regularly since it is no longer as relevant as before. Details in this post here.

The Great Purge
Destroy all Zerg structures in “The Evacuation” mission on Normal difficulty.

If you don’t mind doing at really difficult level, people have theory crafted this method to finish within 3:30 min (because that is when a muta in Kerrigan’s base spawns and this cannot be stopped). Take note that this is likely not the intended way for it to be played, but it is just how people passionate about gaming have figured a workaround for it.

The Quick and the Dead
Activate 2 Tendrils in the “Echoes of the Future” mission within 4 minutes on Normal difficulty.

Thanks for the Advice (Fixed)
Complete “The Dig” mission without killing an enemy unit or structure with the Laser Drill on Normal difficulty.

Full Coverage
Cover 40% of the map in the “Fire in the Sky” mission with Creep on Normal difficulty.

Eat, Love, Then Pray (Fixed)
Destroy all Protoss structures before activating a 4th Temple in the “Phantom of the Void” mission on Normal difficulty.

Raszagal’s Retribution
Destroy all Zerg structures before freeing all captive Protoss on the “Dark Whispers” mission on Normal difficulty.

You Must Defend Additional Pylons (Fixed)
Complete the “Spear of Adun” mission without losing a structure on Normal difficulty.

I’ve Fallen and I Can’t Shoot Up
Complete the “Unsealing the Past” mission by constructing only Probes and Colossus on Normal difficulty.

Warp Incomplete (Fixed)
Do not allow enemy Warp Prisms to warp in any units in “The Infinite Cycle” mission on Normal difficulty.

Disintegration Doctrine (Semi-Fixed)
Destroy all enemy structures and complete the primary objective in the “Into the Void” mission in less than 28 minutes on Normal difficulty.

One Shot, One Opportunity
Destroy 50 enemy Zerg units with a single nuclear strike in the “Flashpoint” mission on Normal difficulty.

Subconscientious Objector
Kill fewer than 20 units in the “In the Enemy’s Shadow” mission on Normal difficulty.

If you come across any other threads, or tips on how to do some of the more difficult achievements, please comment below. Hopefully we can keep all the discussions to this thread so that we can consolidate all the info into the same place for theory crafting.

I have completed all of the achievements available.

You are doing Mengsk’s work.

Seems I am not playing these until the hotfix.

Seems I am not playing these until the hotfix.

Seems like me too.
Or just FIX THE MAPS IN EDITOR

ALL bugged new achievements
The Mobius Factor new achievement bugged?
Anyone know how to to get "One Shot, One Opportunity"?
Leviathan-1945 July 29, 2020, 1:25pm #4

Band of Brothers
Rescue Warfield in the “Gates of Hell” mission while only training SCVs, Medics, Medics, Hercules, Ravens, Science Vessels, and Mercenaries on Normal difficulty. 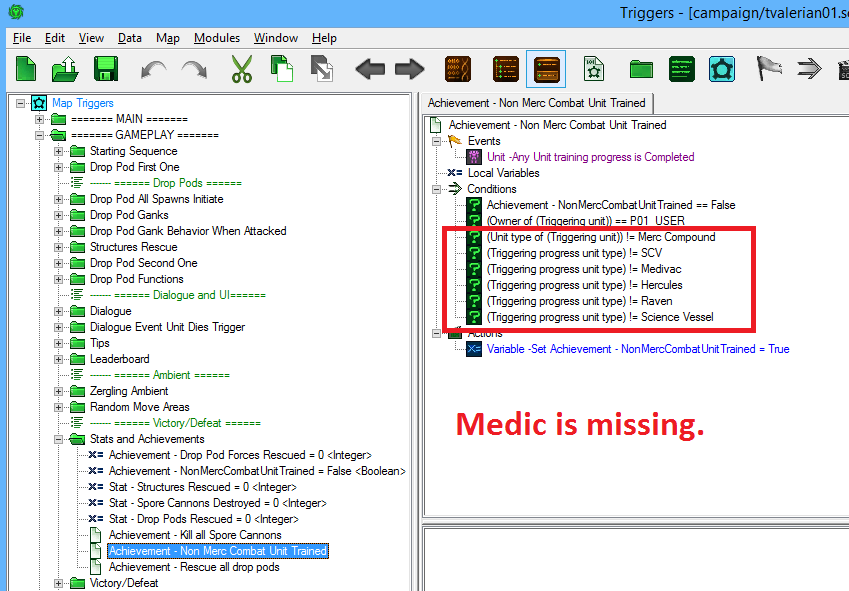 There’s another possibility for this one. The achievement text states that Medics can be trained. However, the achievement’s trigger doesn’t allow for them.

I PULLED A SNEAKY ON YA
May be not on purpose, but blizzard did a sneak peak on some achievements.

Nuke the banelings camp while timed with a mid-game wave (3rd / 4th beacons).

You can also pull two camps together with your army and then throw a nuke in, at least on Brutal this works. There are probably easier ways to do this though

i was able to get all the nova missions achievements. the one to kill 200 with spider mines, i didn’t need to get matt’s gas to obtain it, but it was tight, got it by the last wave.
in the 50 enemy zerg units with one nuke, play it on brutal difficulty. at the last zerg base, you can destroy a spore and sneak in with nova. i got exactly 68 kills with the nuke there. i left mutas/nydus/banelings alive, not sure if that makes a difference on how many units are there at the end of the mission
the mission to kill less than 20 with nova is pretty easy, i completed it with 0 kills (unless the last boss counts as a kill). use stealth and stun granades, then just go for it

has anyone done the terran achievement on the outbreak mission? to win the mission in less than 4 nights. i did it in 2 nights and didn’t get credit

edit: i figured out what happened, using cheats locks you from getting achievements for the rest of the campaign. i wanted to skip a few missions to unlock master archives fast. oh well, redoing it all

has anyone done the terran achievement on the outbreak mission? to win the mission in less than 4 nights. i did it in 2 nights and didn’t get credit

Maybe just an error. I did it and got it first try. Consider restarting your SC2 and trying again.

Done it on brutal. 30 seconds before fourth night.

This thread is immensely helpful, thank you.

Hope for the quick fixes for bugged achievements.

Here’s another. It’s not one of the Anniversary chieves, but one of the originals.
Wings>Moebius Factor>Hard Core.

Moebius Factor has another bugged achievement. This one is “Hard Core” which is one of the original three achievements. It’s the one that requires finishing the mission before Kerrigan destroys 6 buildings on Hard difficulty. Looking at the achievement trigger, it seems that the only criteria for receiving the achievement is to build anything besides a Merc, SCV and Medivac (and to win). That’s it! Build a single marine, for example, and the achievement is awarded. In other words, there’s …

This thread is immensely helpful, thank you.

Just some opinions on some of the working achievements that have elusive criteria:

hiii i got the salvation achievement by having those abilities : diply pylon/ orbital strike/ orbital asimilator/mass recall/guardian sheell/time stop …
may i ask how you got “disintegration doctrine” in “into the void” mission which you have to kill all structures in less than 28 minutes? i destroyed everything but still cant get it

may i ask how you got “disintegration doctrine” in “into the void” mission which you have to kill all structures in less than 28 minutes? i destroyed everything but still cant get it

Likely you missed a couple of structures. The best way to go about is to load your last save before the end and then run a cheat to remove fog of war. Then you will see where are the remaining structures that you have left. Remember you need to load back the same game again because using a cheat will disable achievements for that game.

I think the common areas that might be overlooked would be the 2 at the mid sides (left and right) and also the 2 areas just beside Narud’s area.

thx i was about to loosing my mind, did the mission like 6 times…

i wait a few days then got band of brothers next

I went into Gates of Hell and added a text message to the trigger that’d mark the achievement as failed, then went into the mission and tried making MULEs, didn’t pop up. So I’m pretty certain MULEs are fine. Not sure if you already got this info or not.

i just need the moebius now. just got all lotv

hiii i got the salvation achievement by having those abilities : diply pylon/ orbital strike/ orbital asimilator/mass recall/guardian sheell/time stop …

I can confirm that this works. As long as you don’t use your top bar, these abilities work just fine for getting Big Spear Diplomacy.