[With the fixes in patch 5.0.2.81102, I’m abandoning this thread and starting a new one that includes issues with achievements post-5.0.2.81102. Some of the later issues that were added to the thread after the original post will be copied over to the new thread. The new thread is 5.0.2.81102 Consolidated 10th Anniversary Achievement issues]

FIXED - Annihilation Now
FIXED - Warp Incomplete
FIXED - Expert Phase-Smith, Perfect Templar - *EDIT - There may be a new issue with some of the SoA abilities.

The community has had some time to run through all the new 10th anniversary campaign achievements. Along the way, a handful of them have presented problems either in the achievements’ triggers or their descriptions. This post is a consolidated list of the problematic achievements with some explanation as to what is/may be wrong.

Props to Kyrie for their work to bring all the reports together and to all the contributors over in the Campaign Discussion forum! Using Kyrie’s list as a source, this post will only present the achievements that have technical/bug/clarity issues (not those that are working properly but are just more tricky to pull off).

This list adds some technical/trigger information to the items on Kyrie’s list. Note that I am not a map editor megasuper user; I just have a moderate understanding so apologies if I misinterpret any of it. If anyone comes along who is more knowledgeable of the editor and/or the triggers that I mention here, I’m open to corrections!

So Many Banelings - Kill 200 enemy units with Banelings on the "Dominion" mission. 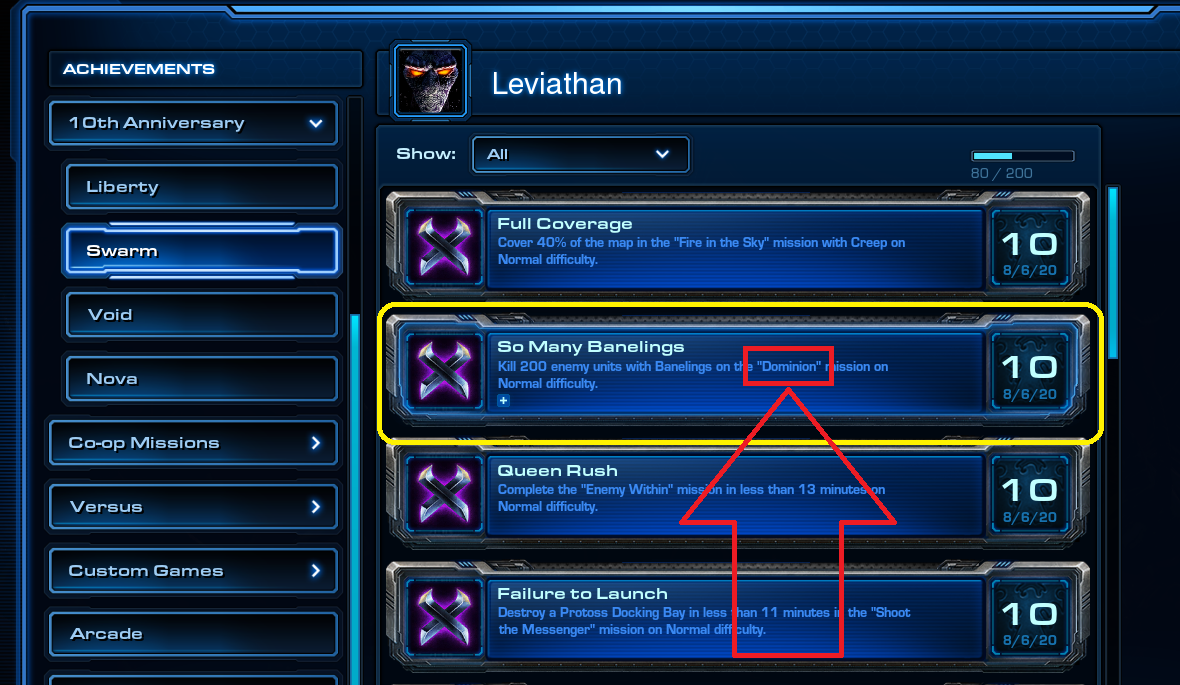 I. The Quick and the Dead - Activate 2 Tendrils in the “Echoes of the Future” mission within 4 minutes on Normal difficulty.

Eat, Love, Then Pray - Destroy all Protoss structures before activating 4 Temples in the “Phantom of the Void” mission on Normal difficulty.

I. Disintegration Doctrine - Destroy all enemy structures and complete the primary objective in the “Into the Void” mission in less than 28 minutes on Normal difficulty.

Hopefully this helps both QA and anyone who stops by wondering if something is wrong with some of the achievements!

i know this is a list of achievement issues…

but since you are mvp on forums…

could you add somewhere offline game vs bots is not loading bots into the game?

Since 5.0 rolled out, there has been a ton of posts about it so I can confidently say that Bliz is aware!

IV. Disintegration Doctrine - Destroy all enemy structures and complete the primary objective in the “Into the Void” mission in less than 28 minutes on Normal difficulty.

I just wanted to add another possibility for Disintegration Doctrine:

If you skip the cutscene, deaths that wouldve happened in the cutscene don’t occur (unless specifically designated by “skip cutscene” editor triggers, which I don’t think this one is).

There is a VERY real possibility that watching the ending cutscene is the difference between getting the achievement and missing it because the trigger didn’t fire.

Meaning, that after the mission’s Primary objective (defeat Narud) is complete, the player must still seek out something… anything to kill in the very short interval between defeating Narud and the mission ending so that the trigger will run one last time.

You are right, this is what triggers it. I did the mission around 7-8 times, and only after I tested what you say here was I able to get the achievement (I went full paranoid mode and got all the gas pick-ups as well and killed 2 times the void rifts in front of Narud)

I found the issue with the Thanks for the Advice achievement:

Just as an example for the “Expert Phase-Smith, Perfect Templar” achievement:

That allowed the achievement to run properly while also allowing only the player’s Interceptors to die.

In “Expert Phase-Smith, Perfect Templar”, for me this is not a problem if interceptors count. That change the mission if you don’t play carrier, but not more difficult and I like that. ^^

For those that don’t use Carriers, it’s not an issue. I only brought it up because it goes against the purpose of the mission: to introduce Carriers.

In reference to Big Spear Diplomacy - Complete the “Salvation” mission without using the Spear of Adun on Normal difficulty, just to update:

So all I have for this is could you check to see if any of the automatic abilities are causing fails?

There seems to be concern about the automatic SoA ability “Reconstruction Beam” as a possible cause for the achievement failure.

In the HotS anniversary achievement “We are the Swarm”, I’ve seen reports that there is a translation error in at least one language. The English version says to clear the three entrenched position by 18 minutes. However, there are translations that say to finish the mission in 18 minutes.

I saw another post that possibly the German one is mistranslated too (not for sure though).

I can confirm, Contract Saviors achievement for Regrets of the Soldier is now patched.

There is a mistake in the description text for “So Many Banelings”.

Dunno. Literally just did Platform mission with Karax. First time i thought i literally missed something. Second time found i didn’t and and every unit was alive. Thought Interceptors are counted too. Third time did it without carriers (left withit start location) and done everything with voids (bot right building) and top with top panel and fast rush of our dignified pirates. Though it caused LITERALLY 0 deaths (units/buildings/probes) i didn’t get achievement anyway… That’s why i guess it’s too early to talk about FIX of this bug.

Back when it was broke, I used the editor fix the Interceptor issue and over several test runs I was able to get the achievement to award and fail properly. Looking at the fix that Bliz put in, it appears they made the same change I did.

I’ll run Bliz’s fix through the editor today with some notifications added to tell me when I earn or fail the achievement in real time.

Hi Leviathan, im giving you my update on the new patch that you made it.

The contract saviors and wrap prism it worked i got the achievement. i thank you you did a good job.

Now the only missing is the Disintegration Doctrine. Not fixed yet. Will be there a new patch?

Just as a side note, I’m not a Bliz employee. MVPs are community members that have been give some recognition by Bliz for being helpful/knowledgeable on certain topics.

It’s already fixed. Did it an hour ago.

It was doable before the patch. The issue is that it would sometimes fail for reasons that players couldn’t figure out.

With the fixes in patch 5.0.2.81102, I’m abandoning this thread and starting a new one that includes issues with achievements post-5.0.2.81102. New and unresolved issues (and some of the issues that were added later in this thread) will be copied over to the new thread. The new thread is Post-5.0.2.81102 Consolidated 10th Anniversary Achievement issues