The Dragonmaw and Wildhammer Clans 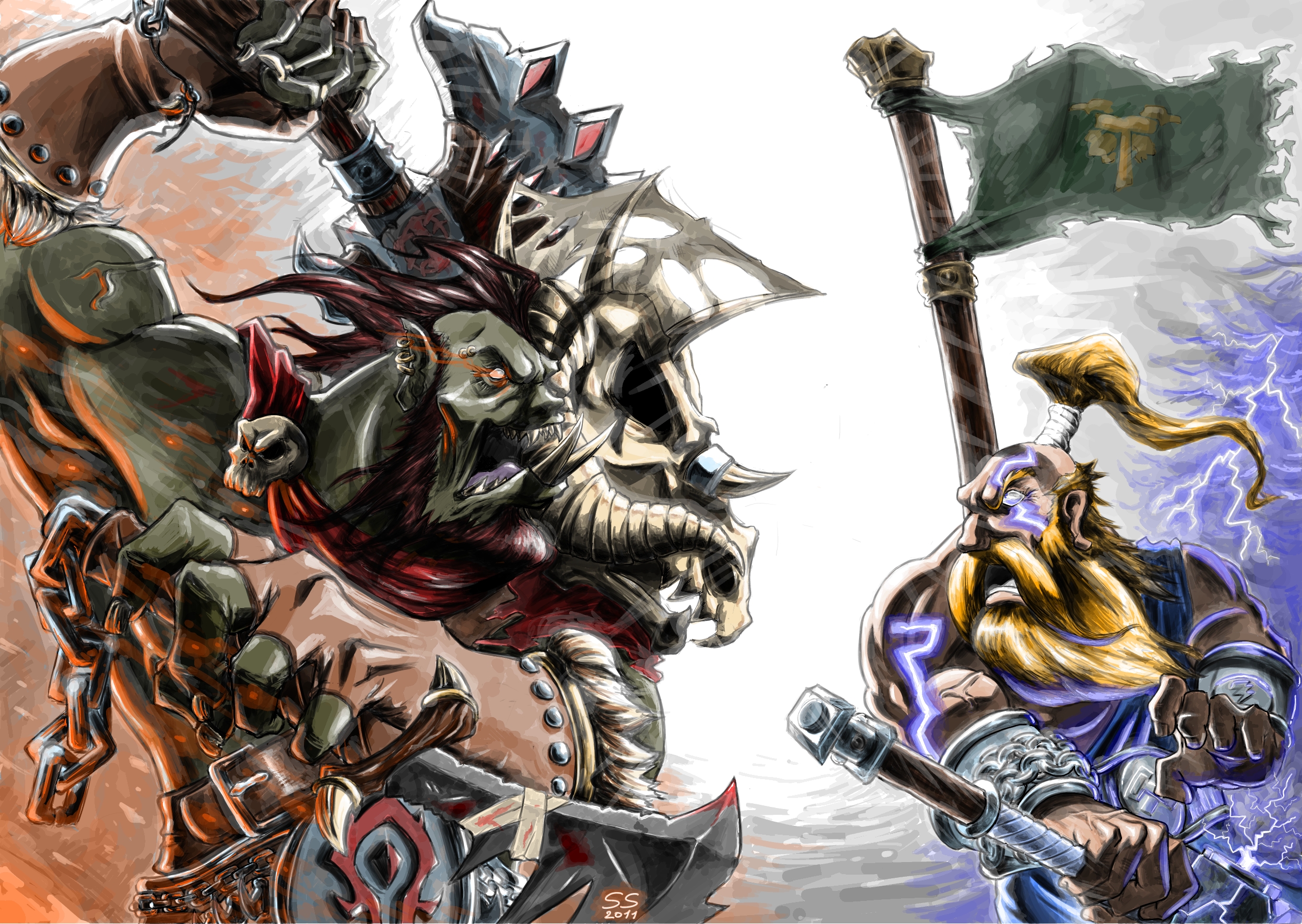 Corrupt forces stir once again in the depths of Grim Batol.

The Black Prince sends his agents across Azeroth to observe.

You need not look far to answer these questions, for the Wildhammer Dwarves and the Dragonmaw Orcs have been fighting these threats - and each other - ever since the Second War.

The Twilight Highlands are entrenched in stories both draconic and corrupt, associated with the Twilight’s Hammer, and three dragonflights - the black, the red, and the twilight. Given that certain aspects of the current narrative have elements of all of this, it would make sense to give the players the option to engage with the content as characters who themselves are integral to the setting.

Both Clans have officially been a part of their respective factions for years, but like the Dark Iron and Mag’har, it is time for an official induction, giving the Alliance and Horde access to these Allied Races.

But a bit more in-depth: both options offer perspectives and visual stylings not otherwise available with the currently playable options.

The Dragonmaw Orcs have a unique culture, relative to their green and brown brethren. Whereas the other Orcs are refugees, fleeing greater powers to distant lands, the Dragonmaw Clan is a relic from the Second War - unconquered and proud. And it seems that they have developed around draconic ritual, branding themselves and continuing their tradition of breaking dragons to their will unabated after Alexstrasza was freed.

The Wildhammer, on the other hand, are also a free people. Unimpressed by their cave-dwelling cousins, these Dwarves much prefer the open air, taking to the skies themselves on their lifelong gryphon companions. Heavy armour does not lend itself well to this practice - instead, they adorn themselves with war paint and feathers to starkly separate themselves visually.

Furthermore, from a technical standpoint, neither would require an entirely new model, complete with animations and rigging. While I might suggest a few tweaks (namely, Wildhammer Dwarves being slightly taller and leaner than the Dwarves already playable), much of the work is already in place for implementation.

I wouldn’t blame you for thinking that, given the events of the most recent iteration of UBRS and a certain Dwarf in Kul Tiras alluding to his clan having been wiped out. But I can assure you that neither is true.

In the case of the Wildhammer, this dwarf seems to be referring to his family subclan, specifically, not the entirety of the Wildhammer Clan. There are some pretty major characters involved with this Clan, and it would be quite surprising to see them written out of them game in passing like that.

As for the Dragonmaw Clan, that’s a bit more complex. Zaela, before her heel turn, was a compelling character (for an Orc). Assuming she was a generally typical member of the Dragonmaw, I would be surprised if everyone followed her on her foolish quest with Garrosh. Furthermore, it seems that someone has stepped into her shoes after her death: Gorfax Angerfang represented the Dragonmaw Clan during Legion, being present at a gathering of faction leaders. Furthermore, the Vulpera recruitment revisits the Twilight Highlands reconfirming it as Horde territory, settling the Mag’har in Dragonmaw lands.

Far be it from me to dictate step-by-step how something might be implemented, if you will indulge me, I have thought of a couple baseline concepts: 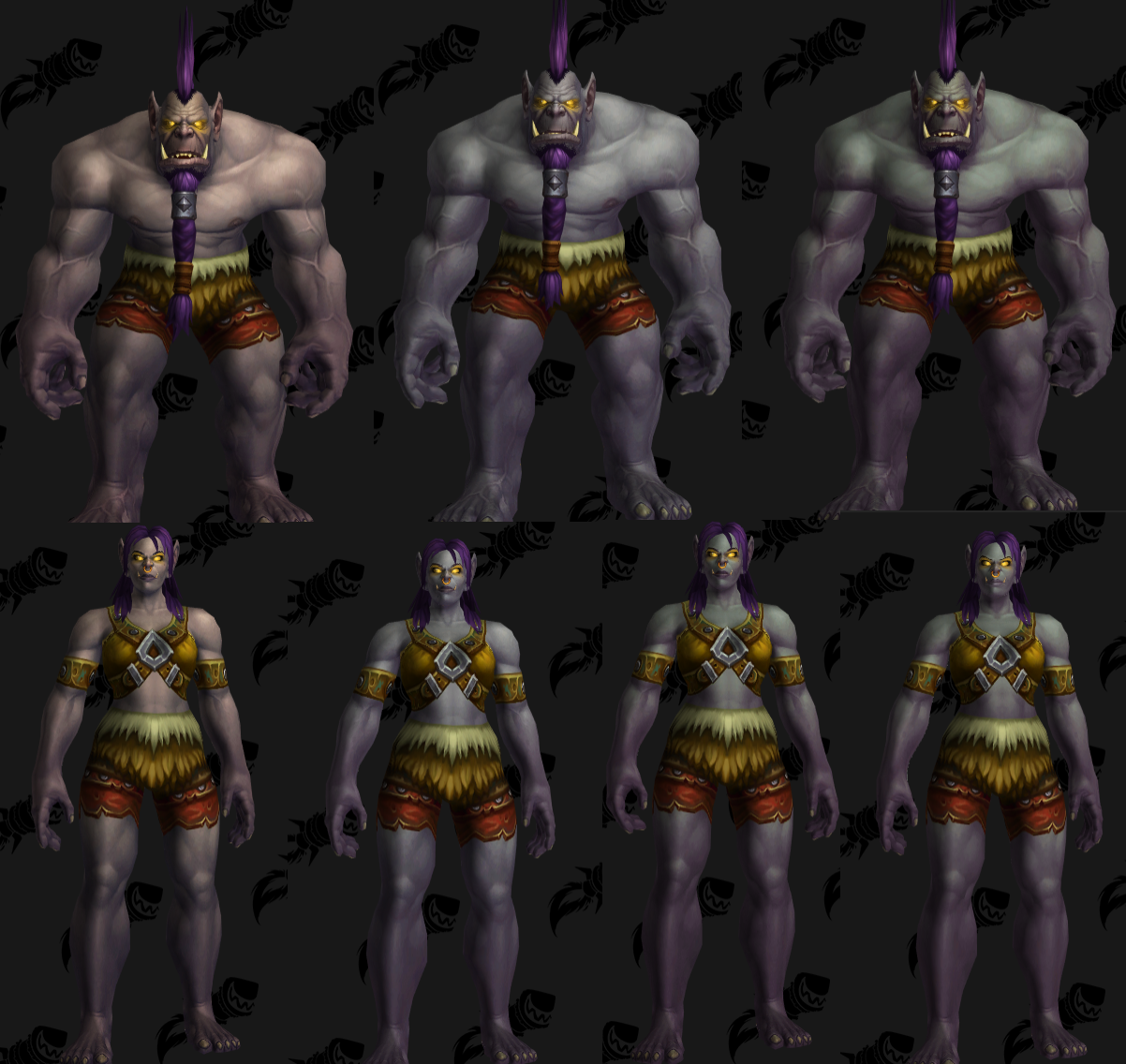 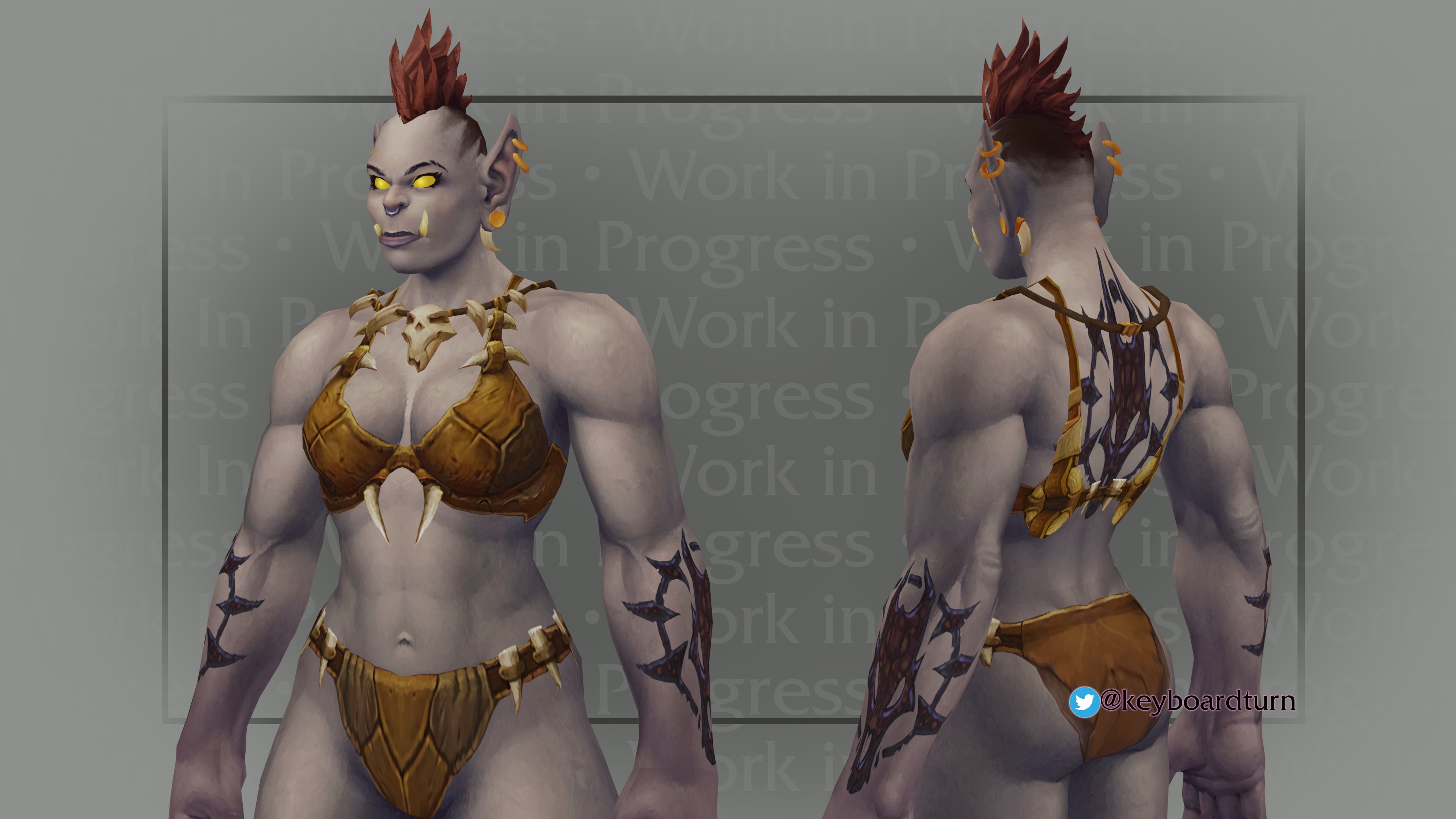 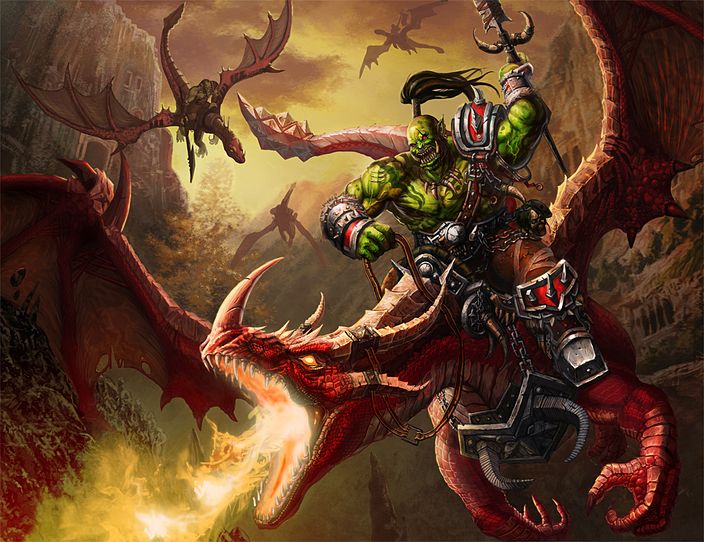 Story : Holding the Twilight Highlands for the Horde, the Dragonmaw Clan has held firmly in Azeroth since the Second War - for them, a war that continues to this day. With the Alliance on the offensive, it’s time for these renowned dragon-riders to take to the skies once more in defense of the Horde!

Now led by Gorfax Angerfang, those of the Dragonmaw who did not foolishly follow Warlord’s Zaela’s hasty call to arms are called upon by the Horde to deal with the dual threats of the increasingly bold Wildhammer Dwarves and a seemingly regrouping Twilight’s Hammer…

Heritage Set : A mixture of dragonscale and bone, wings draped over the shoulder, a tail from the belt, a partially skinned skull for the helm. Branded arms exposed. Colour variations representative of the flights that have come to heel under the Clan.

Racials :
Dragonstrike : Order a tamed dragon to strike an area, doing damage and disorienting all affected. Standing in the flames boosts your primary stat, flames lasting 15 seconds.
Branded : 1% Fire Resist
Soul-marked : Gain a 10 point bonus to Alchemy and Enchanting due to lingering exposure to the Demon Soul.
Dragon-Breaker : Dragonmaw Hunters may tame dragonkin. (Unlocks account-wide once Dragonmaw Orcs are recruited.) 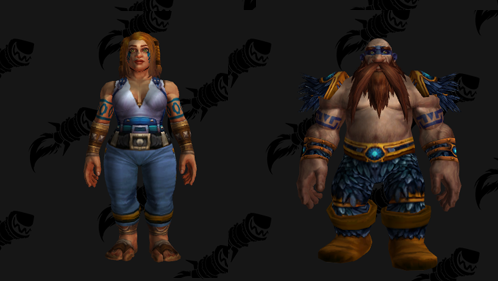 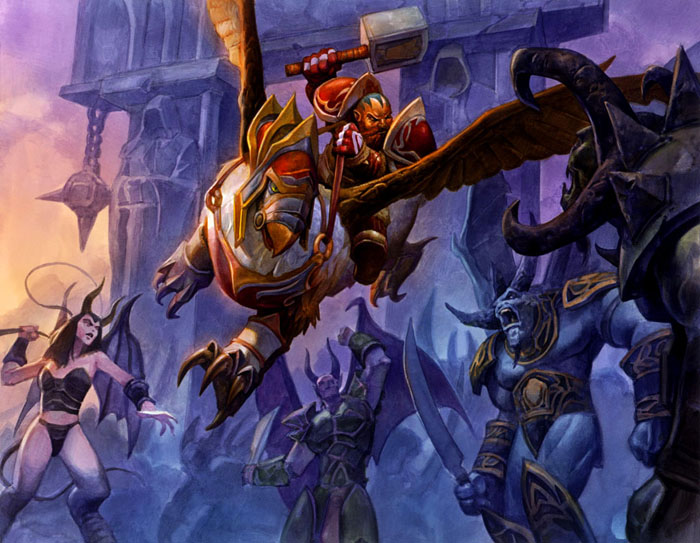 Story : Maintaining their distance from their cavern-dwelling cousins, the Wildhammer Clan has sounded the first alarm to the resurfacing threat of the twilight dragonflight. Noticing the increased activity of the Dragonmaw Clan as well, the Wildhammers petition the Alliance to bring their full force to quash these upstart threats before they get out of hand.

Represented at the Council of Three Hammers by Falstad Dragonreaver, the Wildhammer Clan takes to the skies once again, the vanguard of the Alliance’s efforts to combat these airbourne threats, old and new.

Appearance : Taller and leaner than their underground counterparts, these wild Dwarves adorn themselves with the feathers of their gryphon companions and ready themselves for battle with woad war paint. Their hair and beard styles are also much more extravagant than other Dwarves.

Heritage Set : Showing as much skin as possible to flaunt their war paint, the Wildhammer Clan also flaunts their bond with their gryphons with feathers, and honour their fallen by adorning themselves with bones and beaks, ensuring that even the departed are present for whatever glorious battle awaits. Colour variations are representative of the different plumage colourations of gryphon breeds.

Racials :
Stormhammer : Throw forth your lightning-charged weapon, stunning enemies in an arc in front of you for 1.5 seconds. Enemies are marked, taking X% more damage for 10 seconds.
Thunderstruck : 1% Nature Resist
Topsider : Gain a stacking increase to run speed after defeating a foe that gives experience or gathering a node, relishing in the freedom that living above ground gives.
Gryphon-Tamer : Wildhammer Hunters may tame Feathermanes. (Unlocks account-wide once Wildhammer Dwarves are recruited.)

We sort of have Wildhammer now with the new customizations. And its WAY past due!!!

Is it possible to have Dwarfs not look absolutely badass in anything they do? seriously, I have never not seen Dwarfs either the coolest thing or in the top three coolest things in any fantasy setting.

We’ve “sort of” had them since Cataclysm when Shamans became playable. Just as we were “sort of” given Dark Iron when they made Warlocks playable at the same time.

To be frank, giving Ironforge Dwarves Wildhammer tattoos is better than nothing. I’m grateful that the option exists, given the more likely alternative of simply having nothing at all. But the Allied Race alternative is better still. That being said, the Dragonmaw were entirely snubbed.

As the discussions around Allied Races often point out, the cultural distinction between two “races” is generally what makes the Allied Race worth making.

Antlers, functionally, could have been a Tauren customization.
But the Highmountain are culturally distinct.

Arcane tattoos, functionally, could have been a Night Elf customization.
But the Nightbourne are culturally distinct.

Fiery eyes, functionally, could have been a Dwarf customization.
But the Dark Iron are culturally distinct.

Brown skin, functionally, could have been an Orc customiation.
But the Mag’har are culturally distinct.

I would even make the argument that the Dragonmaw and Wildhammer are more distinct from their “core” race than Mag’har and Dark Iron, respectively.

we already have new orcs and dwarves

both wildhammer and dragonmaw are playable already

Normal grey skin on Mag’har is available, it’s not the same as the purple-grey skins used by the Dragonmaw.

The glowing eyes look different too.

And it’s not just about looks - the AU Mag’har do not have Dragonmaw Orcs among them.

its essentially the same thing

just like giving normal dwarfs tattoos is the same thing

I will admit, you can produce a reasonable facsimile of either. Ultimately, however, that is inconsequential. It is the cultural distinctions that matter more than anything else.

I mean, just look at the whole Blood Elves vs. High Elves thing.

You made this thread 3 days ago

The Dragonmaw and Wildhammer Clans [image] Credit: Sunstrider89 Corrupt forces stir once again in the depths of Grim Batol. The Twilight Dragonflight returns. The Black Prince sends his agents across Azeroth to observe. Who can the Alliance and Horde rely on to tackle these forthcoming draconic threats? Who can provide a base of operations for our factions? Who can provide expertise in air…

Yep. Giving it another try.

Quite obviously. I also made it a couple years ago. Points for paying attention, though.

What I mean was, why not just bump it or something

You can’t bump your own posts.

Noone wants another dwarf or orc reskin. Give us Ogres, Ankoan/Jinyu, Furbolgs, etc

yeah you can
Just use an alt

All those would be more fitting for a new core race.

The original intent of the Allied Races was to add a little flair to existing assets to align our playable choices with what is technically already playable. Vulpera were the exception rather than the rule. Entirely new races need not be allied races.

while I dont agree with ogres and never want them to be playable, the other races im cool with.

I agree with your sentiment that we don’t need more pure reskins of the same race. Especially now they’ve moved away from allied races and towards giving them as customisation

The only argument I would have against either would be that it’s just embarrassing that it took them nearly 20 years to get all the WarCraft II era races playable.