I can’t even figure how they thought leaving it like this is acceptable?

You have been ignoring the blood elf community for YEARS. They deserve customization and a hd revamp of Silvermoon City.

PS: While you are at it, give void elves some more hair styles and a toggable entropic embrace.

Makes you wonder who Blizzard has really been listening too? I thought Shadowlands was going to be where we would recieve customizations options to express ourselves more, but it doesn’t seem like that, considering there is only a small handful with a large amount of options, a large handful with very little options too, and a small handful that got nothing.

Even counting jewelry, compared to some races, female belves got screwed as well.

It was all just so lackluster.

All right finally had some time to get it worked on, but I’ve made some changes to my Belf Customization List.

Still a work in progress…

Eyes, Hair and Faces
A great deal of options remain unexplored in regards to hair, eyes and faces and should be added to give Blood Elves a greater amount of options. Eye colors especially could be expanded for not only several new shades but also for greater player options.
Hair for Blood Elves should be expanded to show not only the prim and proper high elf styles but also to represent the militaristic Blood Knights, the wayfinding Farstriders and the cultural spread of Horde styles found among the orcs, trolls and tauren.
And honestly… just more face options…

Warpaint, Tattoos and Scars
Options for warpaint, tattoos and scars should be added to Blood Elves a race that has been fighting for survive for years and struggled to get back to where they are now. Damage is expected. 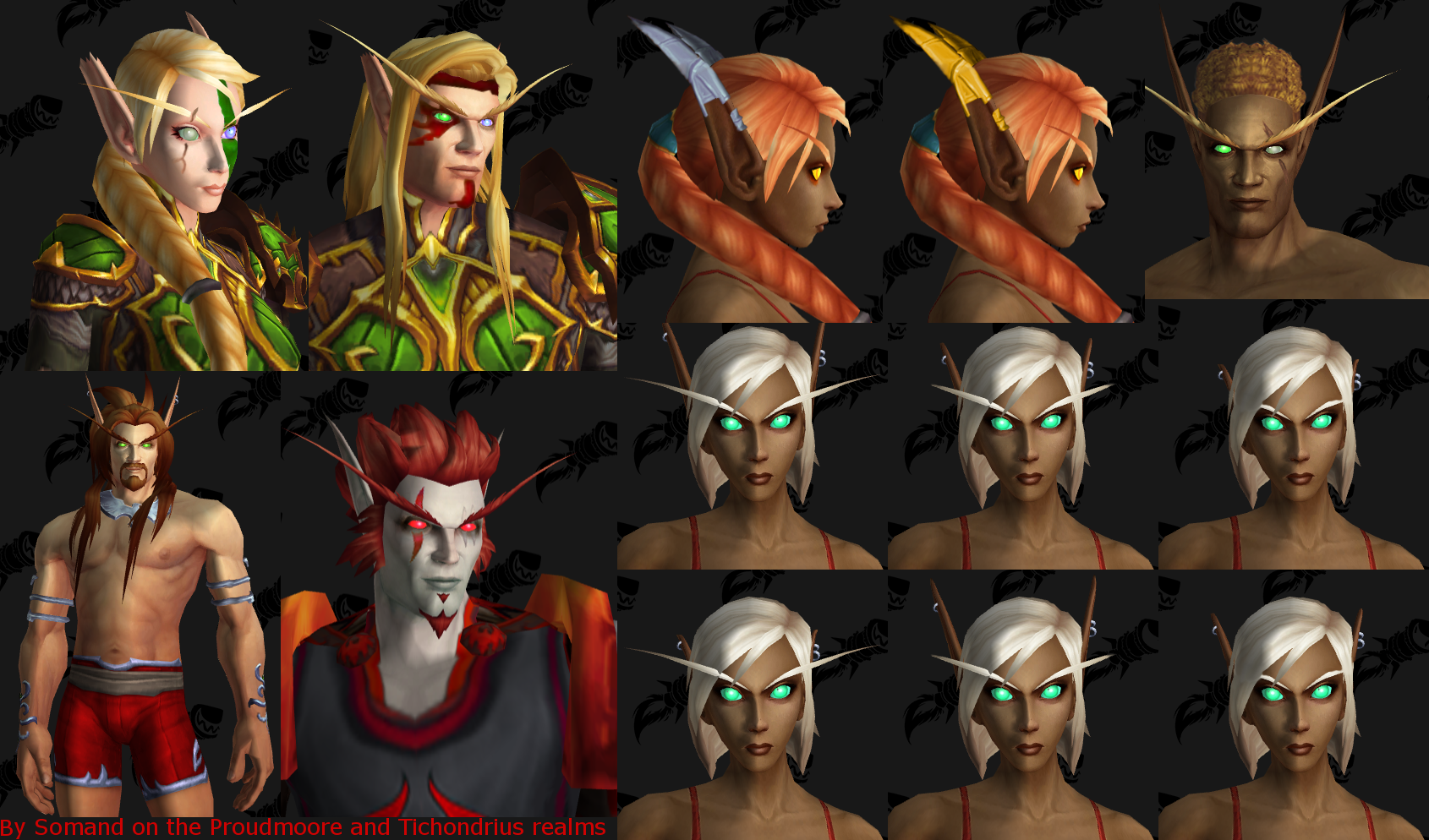 Misc
More options that don’t fit as easily into a category. Sub-Races
There are a few Sub-race options that could easily be applied to Blood Elves including Darkfallen, San’layn and Felblood Elves.
Though the Darkfallen now also include Dark Rangers/San’layn as the same thing the differences between them compel me to place them seprately. Heritage Armor
Several additions could be added to the Heritage armor or changed to make it feel a little better overall.
This includes a better Boot option that is more in line with the gauntlet, a Lor’themar style coat for the hips and legs and additional color options. 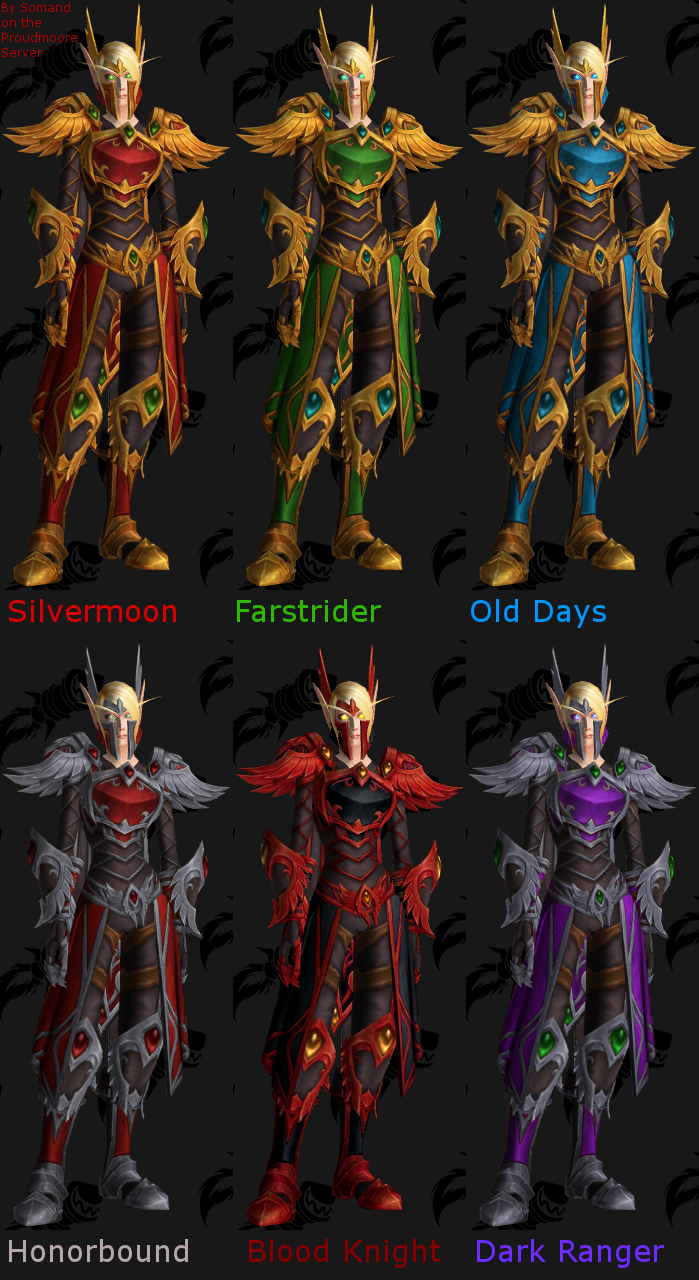 Paladin Mounts
While the Thalassian Charger is wonderful and emplematic of Blood Knights, its getting along in years now and could use an updated model.
Alternatively a new model using either a Courser or a Hawkstrider would be a wonderful addition to update the model and bring it more in line with the newer chargers added since its creation. New Classes
Some new classes have been suggested for Blood Elves, specifically Druid and Shaman. Depending on how the classes were done both could be good additions to Farstrider ranks.
Though the druid could be done as a arcane Botanist bending nature to their will. Feel free to toss suggestions at me to add.

You seem to have major quality loss on my images there for some reason, aside from the mount one.

Here are the old imgur links without any loss:
https://i.imgur.com/S9S41tf.png

You seem to have major quality loss on my images there for some reason, aside from the mount one.

Strange, they show up the same for me.

Replaced the links. Thank you.

I want all of these so much

Those felblood examples are so neat. Also I haven’t seen the dark sclera red eyes before! Those look lovely.

I will want San’layn as their own AR preferably but I’ll take em how I can get em these days.

Not sure who made the dark sclera version there but they are neat! (if anyone knows the person who made that let me know.)

Out of likes but agreed, as long as we get some decent customization & more than just red eyes, haha!

I would honestly do Felblood elves with Dh horn choices and wing choices but that’s just me.

I’m oddly taken with the feathery wings bit they seem to have. I used to think that was a small group that had that but it seems most Felblood if not all of them have em. They’re kinda neat.

My headcanon is that they’re nascent wings and that over time they’ll get bigger and fluffier.

In a shocking twist no one saw coming 9.2.5 is a giant disappointment.

My headcanon is that they’re nascent wings and that over time they’ll get bigger and fluffier.

In a shocking twist no one saw coming 9.2.5 is a giant disappointment.

I don’t have it in me to keep hoping.