so i want to talk about ideas for customization for the Kul Tirans and Zandalari trolls.

personally i will admit i don’t play much of Zandalari trolls so my post will be more focus on the Kul Tirans.

however i add them in the tiltle because i want to hear what creative ideas you guy can give for both races, don’t get me wrong i think the Zandalari Trolls are pretty cool.

But i liked the Kul Tirans more and that is why i have been playing one sense i unlocked them back at BfA.

ok, so my opinion on things that could be added for Kul Tirans:

1.to be able to change from Big to Skinny.
seriously i know Stormwind Humans are skinny but i want the Kul Tiran skinny model to be playable and i want a female version of it, i am ok if Kul Tirans where the only humans in game with this option.

Stormwind humans already have the mix of human race in their appearances i think it would be ok if Kul Tirans where some what shape to resemble human races like Asian or Black or White.

but i would prefer if their main focus would be the body shape from skinny to chunky.

and so that is all i can offer.

as for Zandalary? like i said at the top of my head i don’t have much creative ideas but i will say the ones i would like:

and that is all i can come up with, anyways share your ideas but keep it nice.
no need to be rude if you don’t like the post just ignore it, that would be better than being rude about it.

but if you can give a proper opinion without being rude that would be even better .

I have some ideas for Kul’tirans!

We’ll start with the easy things:

Scars separated by head and body and more of em.

Thin model and regular human model toggle. (We do see Kul’tirans of all three sizes regularly so why not?)

Now lets move on to some less likely things:

Glowing eyes for Drust magic and Tidesage magic. Give us some interesting water glow affect for the Tidesages maybe?

Perhaps a model toggle for less belly since some folk seem to think that makes us stronger somehow.

Peg legs, Hook hands and so on. Oh and eye patches!

Lets get some nice things for the Kul’tirans in a serious and helpful manner for all sorts.

More customization is a good thing. I don’t think it was mentioned, but KT males basically have the same blank gaze no matter which face option you choose (not sure if it’s the same with the females). It would be nice if they had more expressive options.

Totally onboard with the changes you’re requesting. <3

Tattoos: Things ranging from the typical “Anchor” tattoos to other seafaring style tattoos. Also some Tattoos that fit the theme of the Drust would be cool especially for Kul Tiran druids.

Hair/Facial Hair: They’re really lacking variety in this regard. A few more unique ones would be nice but also inheriting options from the Mainland EK Humans would be great. As well as giving the EK Humans some Kul Tiran options as well.

Faces: They need more of a variety in facial options. They’re sort of like the Pandaren and have same face syndrome. Perhaps not as bad as the Pandaren but the variety is still lacking.

Skinny Model: The skinny human model we see in Kul Tiras should be a toggle option for sure. Include a female version as well.

They need the option to perma smoke a pipe.

i was also thinking of suggesting that…
but with all the censors i just thought someone will complain about that idea.

Sailors smoke pretty big pipes and such so adding that would have made sense.
but sadly i think the censor will not allow it.

Pandaren and have same face syndrome.

Hey, we live on a turtle. Not a lot of wife options to pick from.

The ladies need some loose lock hair styles. Everything they have is either pulled into a scrunchie or resembles a 1980’s Aquanet masterpiece.

Going to go with an eyepatch as a face option, like male night elves have a blindfold.

pretty troll faces. that would be new

Those might be the only lore appropriate options. lol

Going to go with an eyepatch as a face option, like male night elves have a blindfold.

Edit: or even an eye patch jewelry option

i know in truth i said scars in thier body but i was hoping to see a pegleg or a hook for a hand.

i mean i wouldn’t go as far as that pegleg hook for hands character from family guy but still if we had the option would be pretty epic for RPs.

(hey how you lost that hand?)
(ahhh twass at sea i did, biggest shark i have ever seen. tried to chew me boat, i swear he most have been sent by that witchs azhara she hate my guts that one! i harpooned his stomatch open but in revenge he got me by the arm… my hand was lost by then…)

I’d like an option for slimmer- more like an Orc, but not as thin as a Blood elf. And a toggle for more muscles for the females.

Love to see more tattoos and perhaps eye patches that are a bit more ornate for the females. The female faces are ok, but I’d like a rougher version too, less of the doe eyed look, sharper features… an option to look weathered, wise, imposing…like someone who could captain a ship!

honestly speaking here but i would love to have a chubby orc or a skinny orc.
in Dreanor there is the pale wish are really skinny sickly orcs, but that would be way to skinny.

but i do want a fat orc because in old blizzard’s arts there use to be a old drawing of a Blade Master that looked like a fat Orc. (and he looked cool in my opinion)

As per the thread, there are some ideas that have caught my eye that I’d like to share here.

I’ll start with the Kul Tirans.

A fairly common request I see if regarding their model. 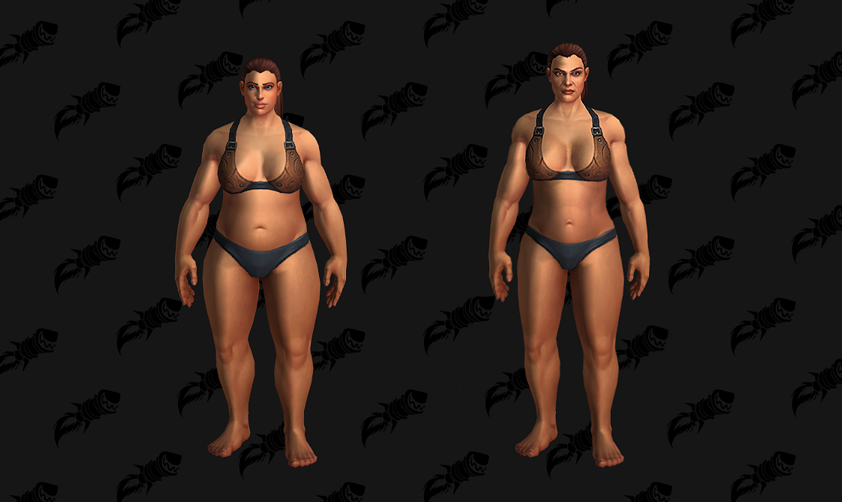 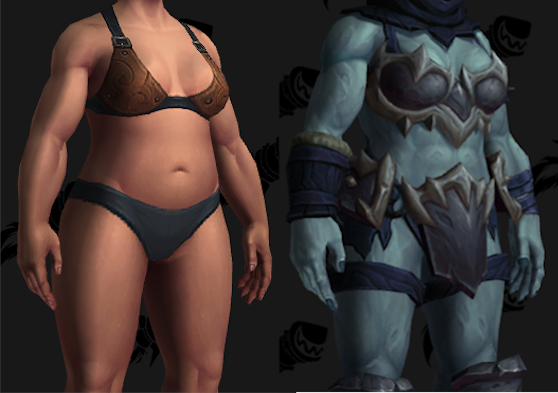 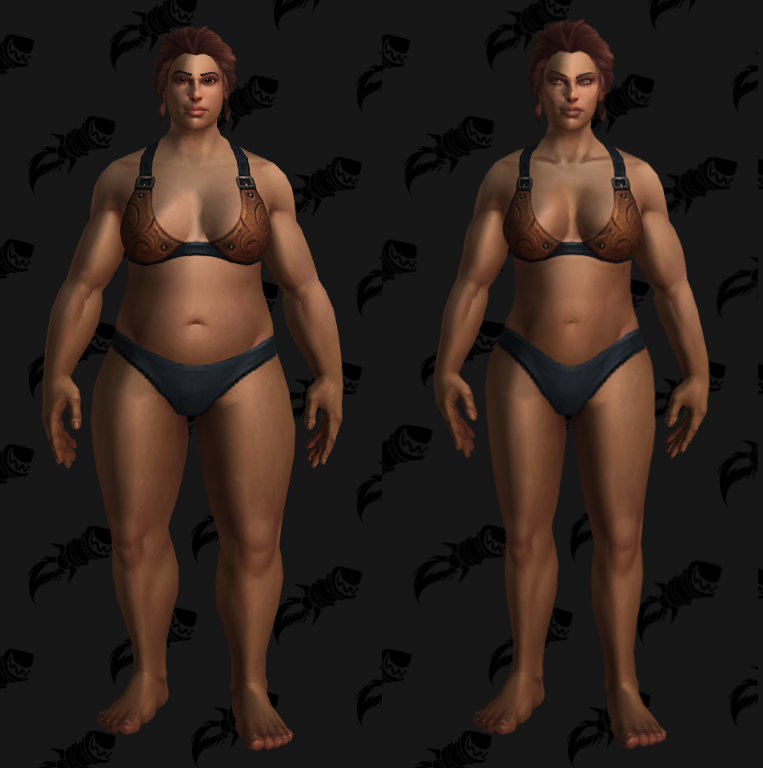 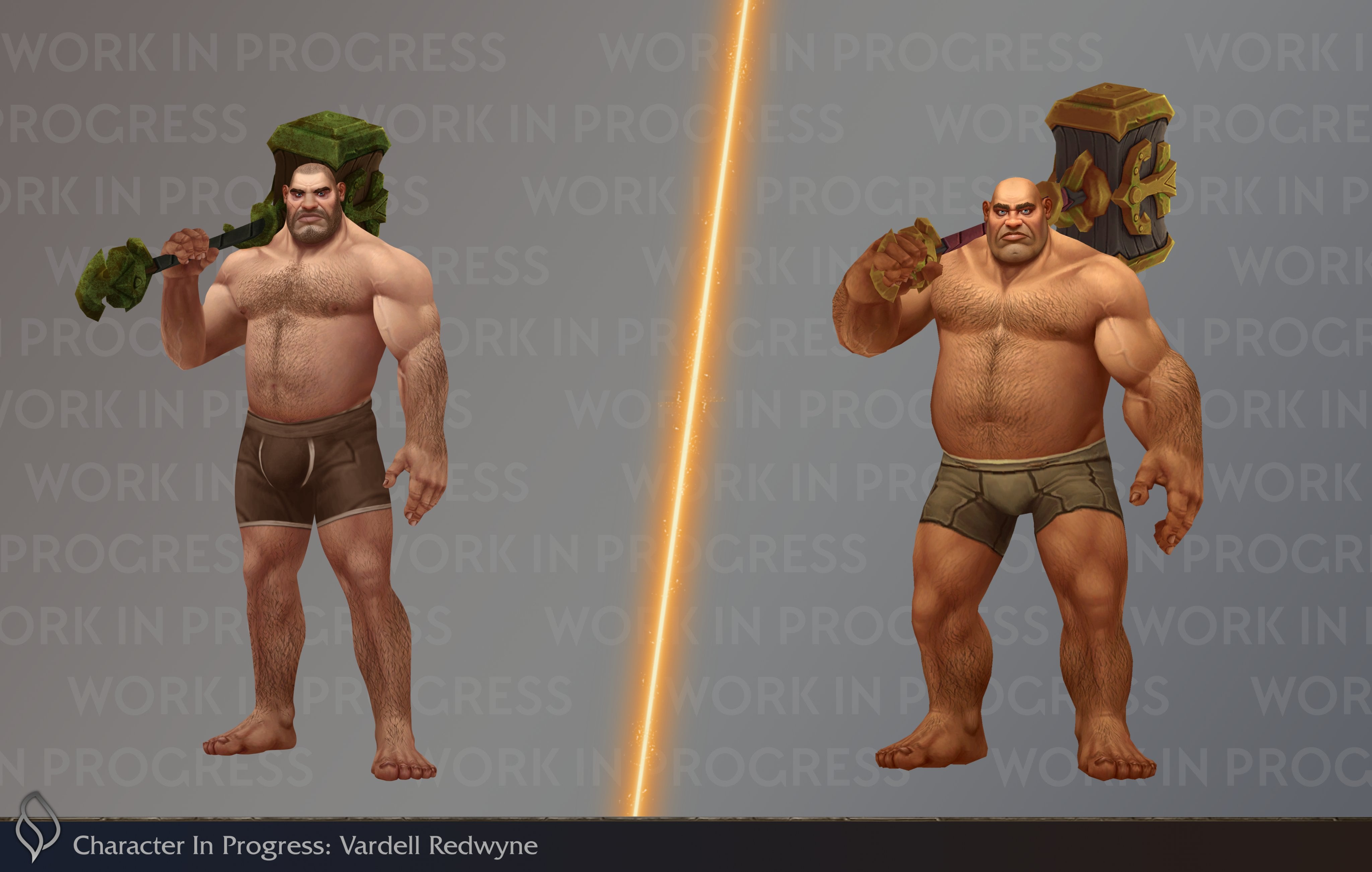 These offer fierce faces and more muscle definition, while remaining true to the original model and body type. All of which are befitting of rugged sailors. These concepts also seem to channel the Vrykul a bit as well.

They could possibly be added via a model toggle?

Onwards to Zandalari. I really do enjoy this race as they are my go to on Horde, after Blood Elves.

I also feel like this would give them more resemblance to other Troll tribes in the same vein as Darkspear got.

I also really like these alternate tattoo designs, which I believe come up on the older Isle of Thunder NPC models;

Warpaint like the Darkspear would also be welcome, but I like the more regal and magical flair of these tattoos.

Finally, a toggle to be able to customize the scale patterns as well as turn them off, again as seen in these pictures of the old NPC Zandalari models; 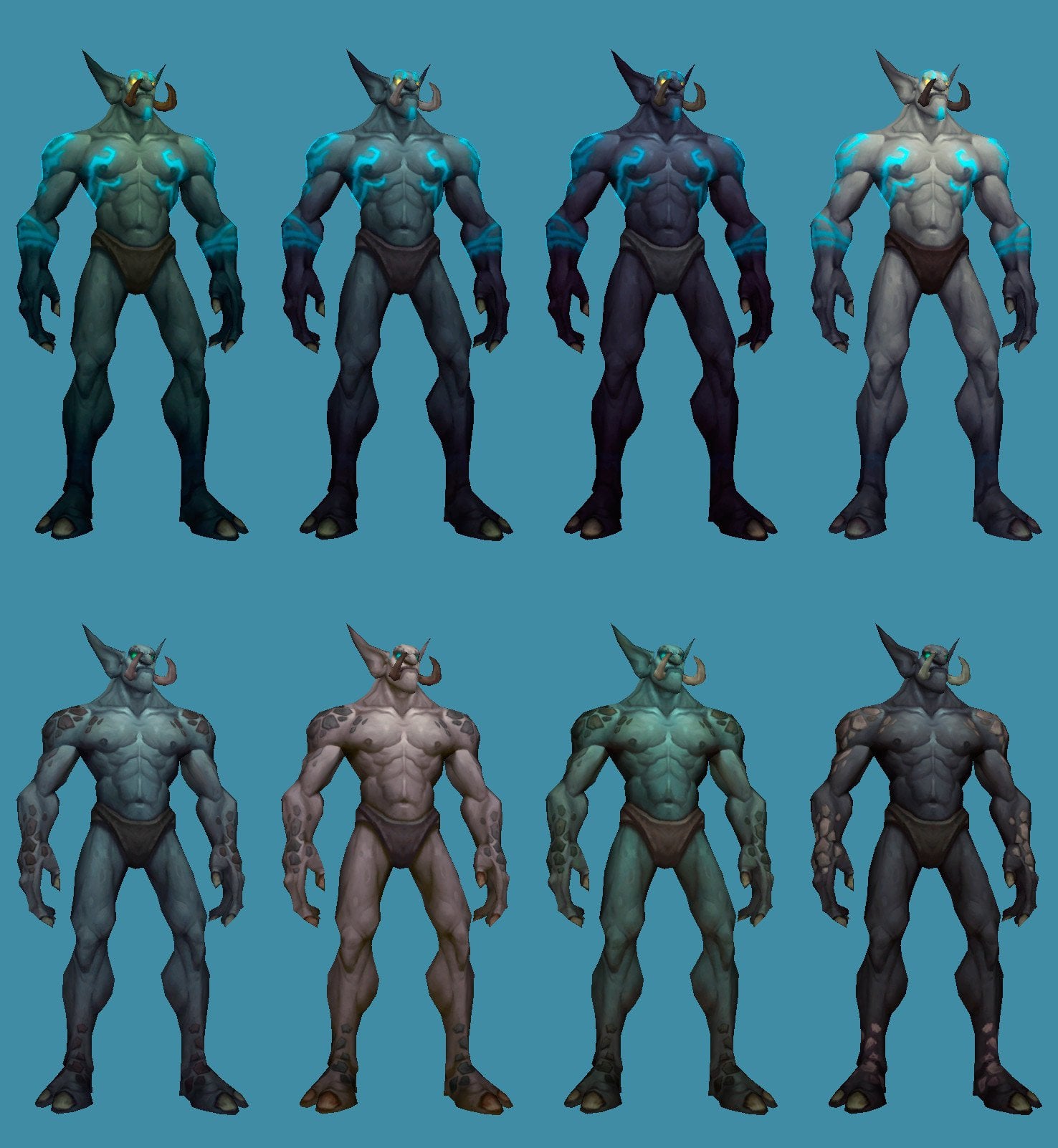 Aside from these I’d love some Blood Troll colors and hairstyles as well as maybe some spikes in the same vein as the scales for Zandalari. 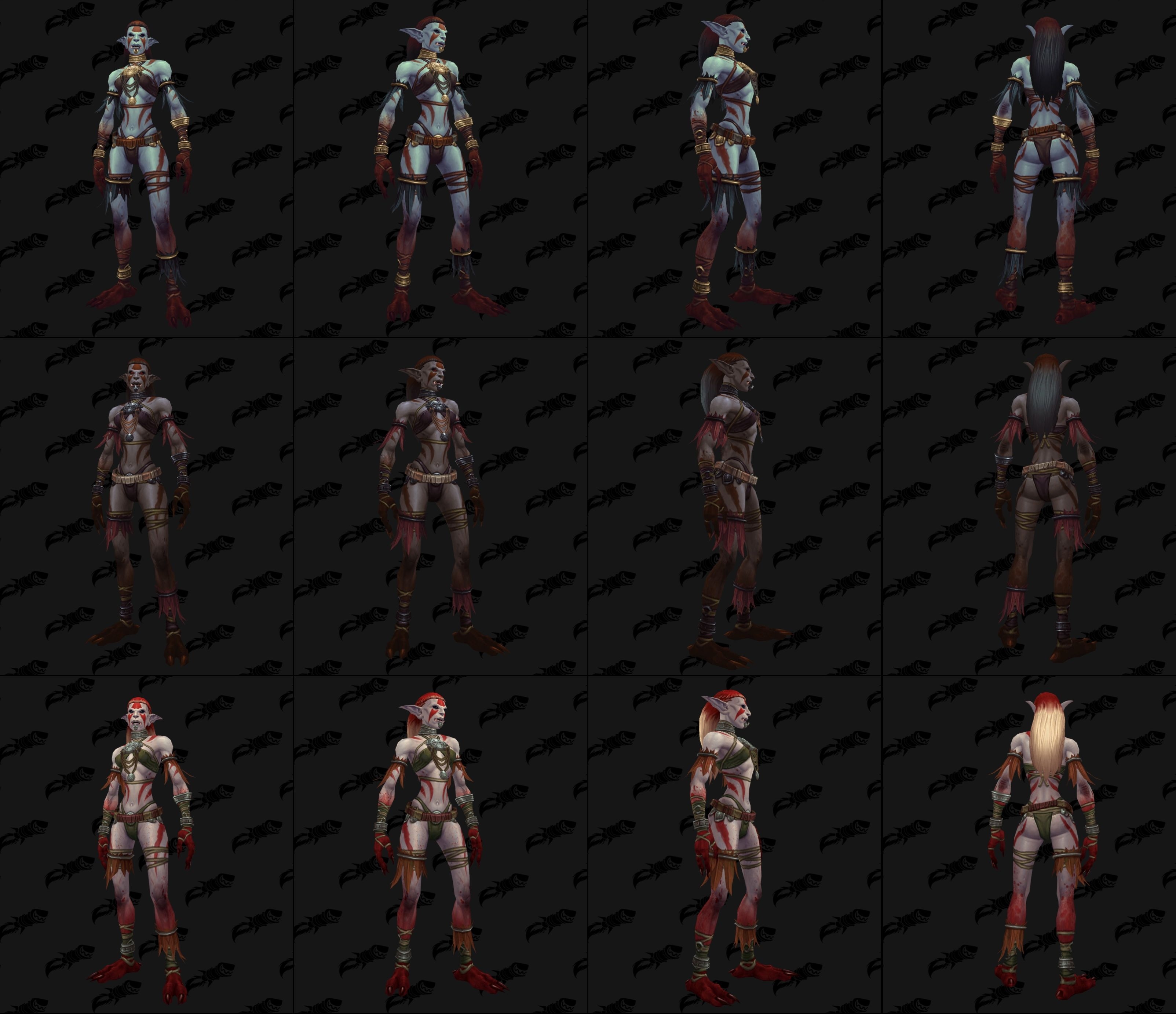 Also I think it would be cool to get some loa-based customizations, like following loa gives you access to certain physical features.
Like Akunda lightning scales,

Gral Sharp teeth/shark skin, I want little earrings based on the druid form too,

Maybe like a little mini tribal figurine style but with blue jades. 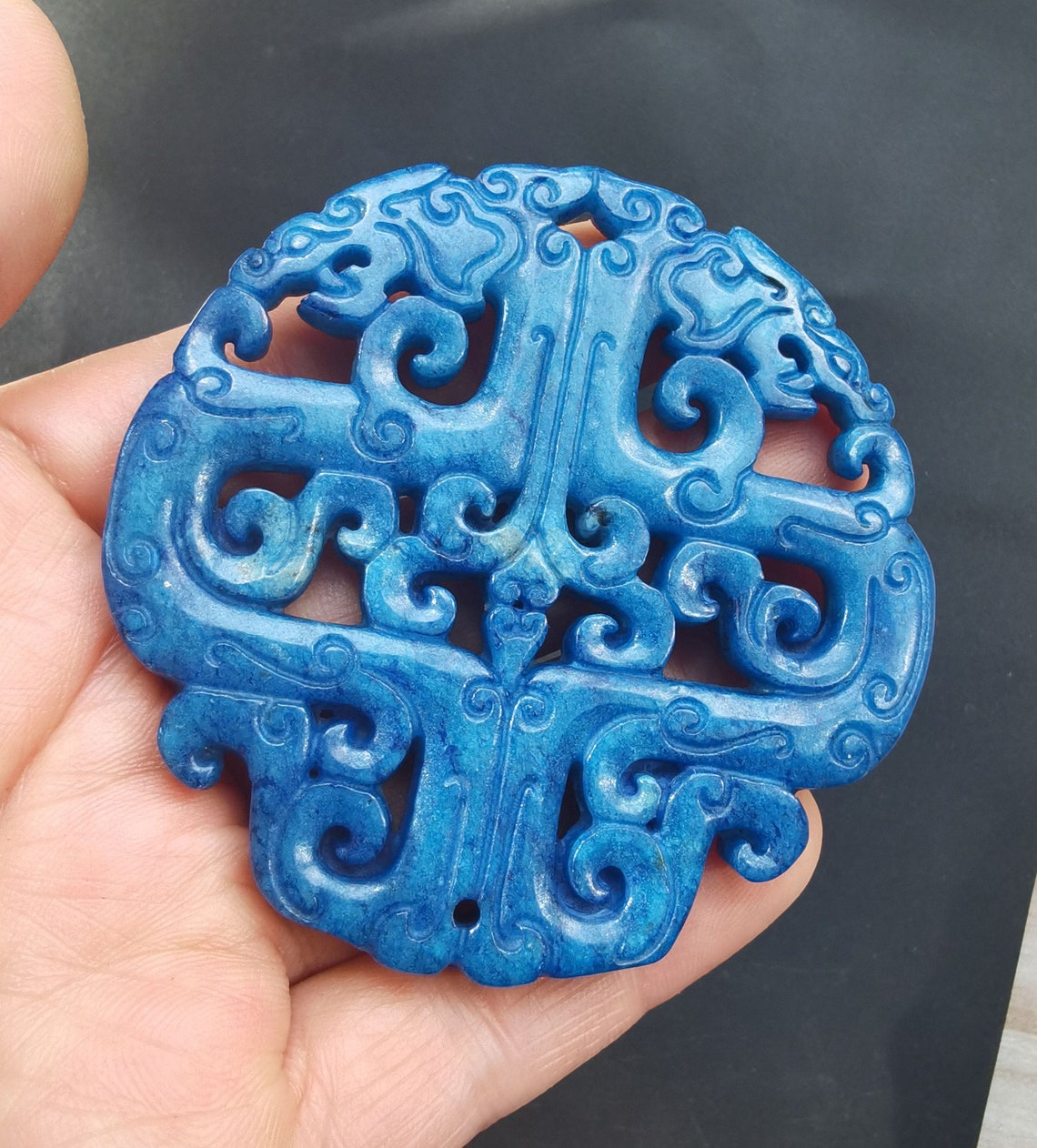 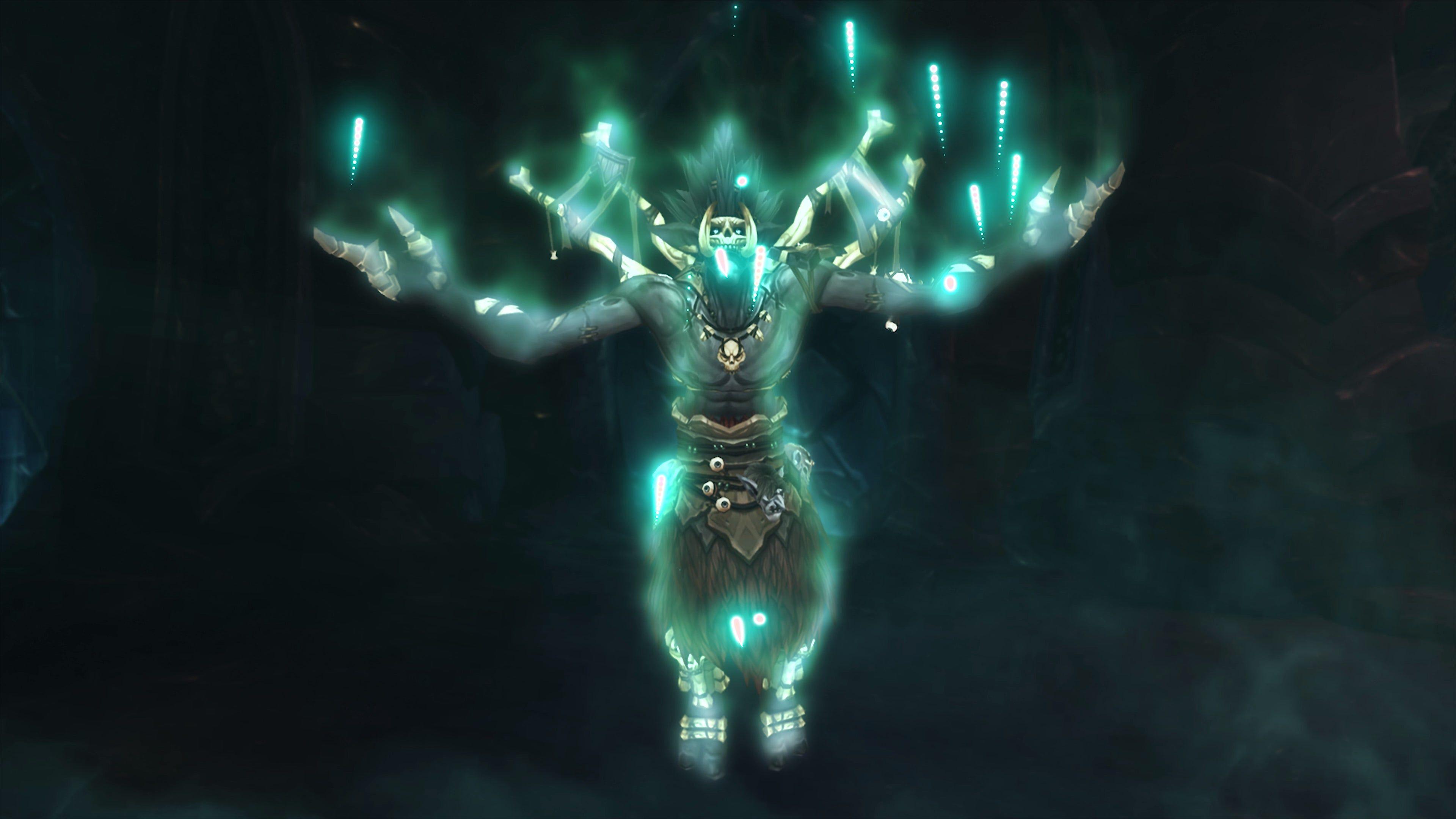 Kimbul based hairstyle and hair color (orange with stripes in hair and other tiger stripe colors, maybe a few two toned based hairstyles like the darkspear trolls with the stripes being a different color) and stripe body tattoos. Hand stripe tattoos.

Torcali - Torcali features (a head jewelry options with the two horns would be nice. 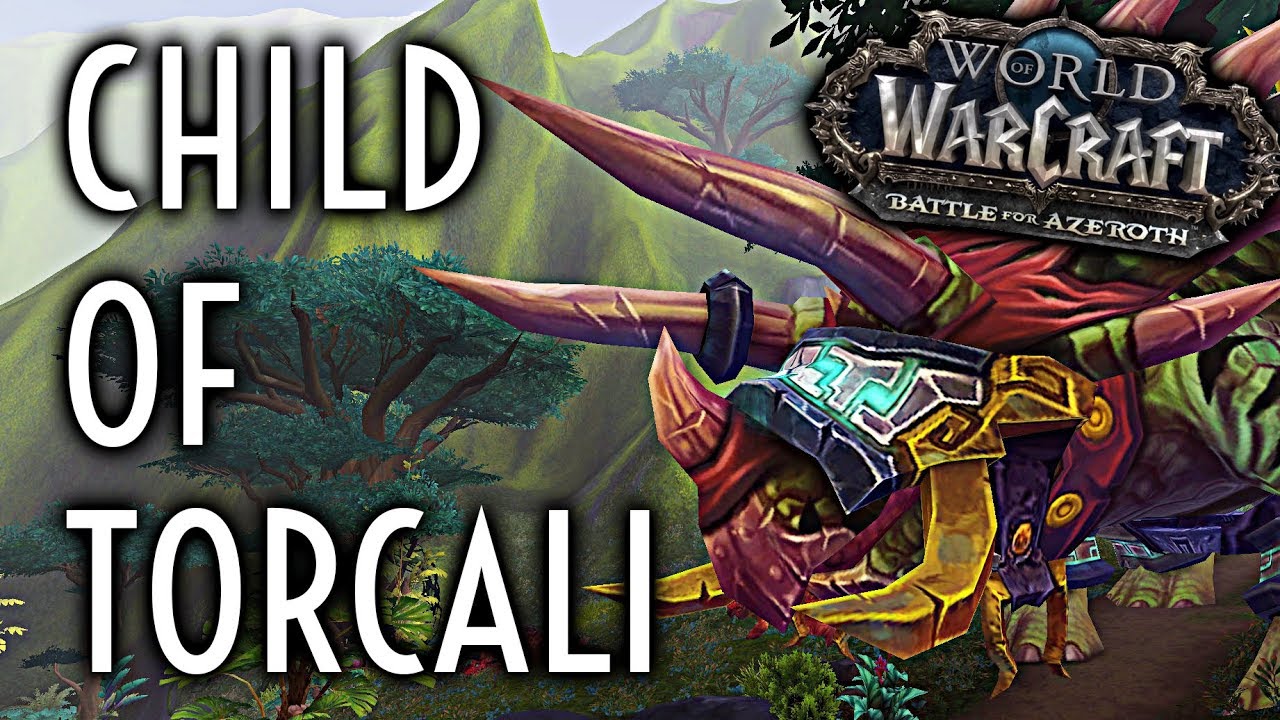 The torcali mask would be a nice little nod, maybe that as a transmog would be nice. Or Loa glowing masks (in certain highlighted features such as for torcali glowing horns) would be nice as a separate thing. A loa mask based on each Loa would be very cool for transmog.

Jani bling would be nice, a little necklace or something for Zandalari thieves/rogues would be a nice nod to him.

Sethraliss lightning stuff would be nice, something to hint at ancient worship for her such as a hairstyle, 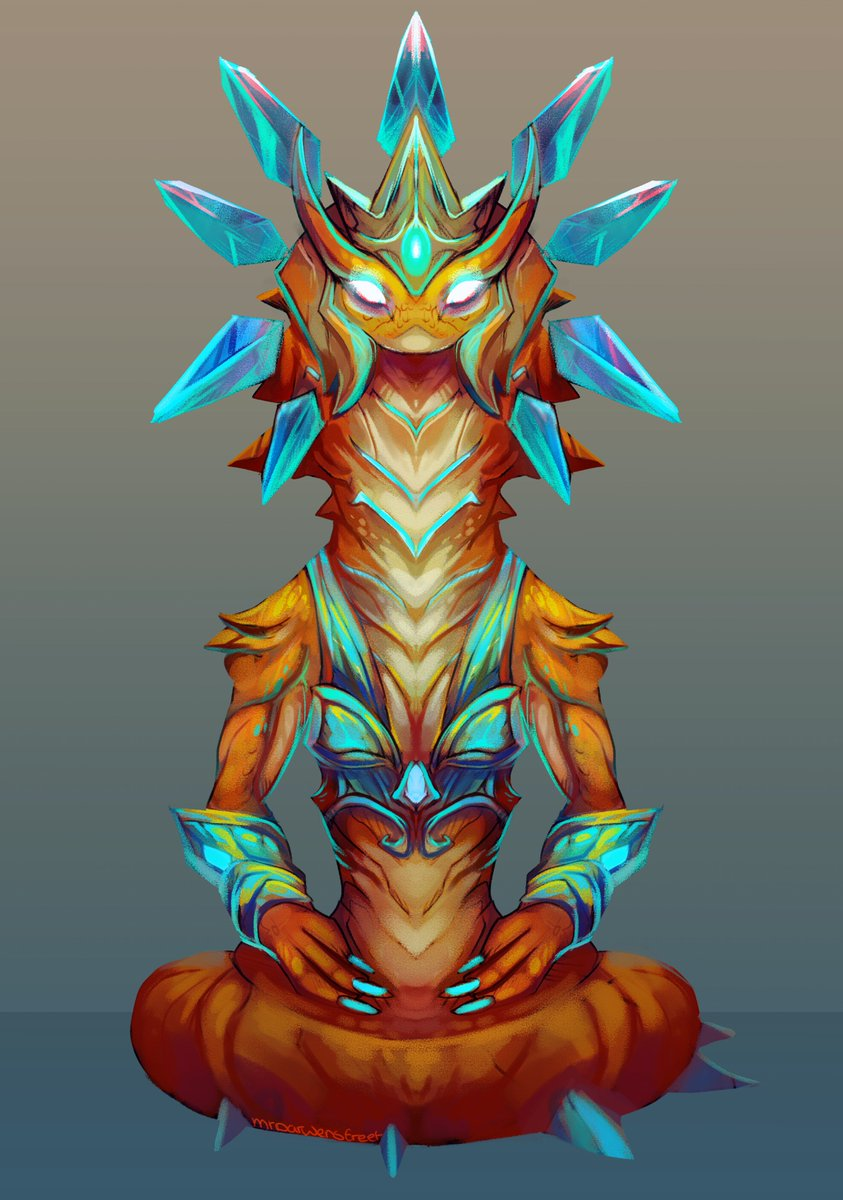 At least the jade lightning stuff would be nice for weaving that into jewelry wether the hair or body. A necklace or something.

Shadra - some hair net with 8 or more jewels representing shadra’s eyes. And her tattoos could have varias spider themed looks. 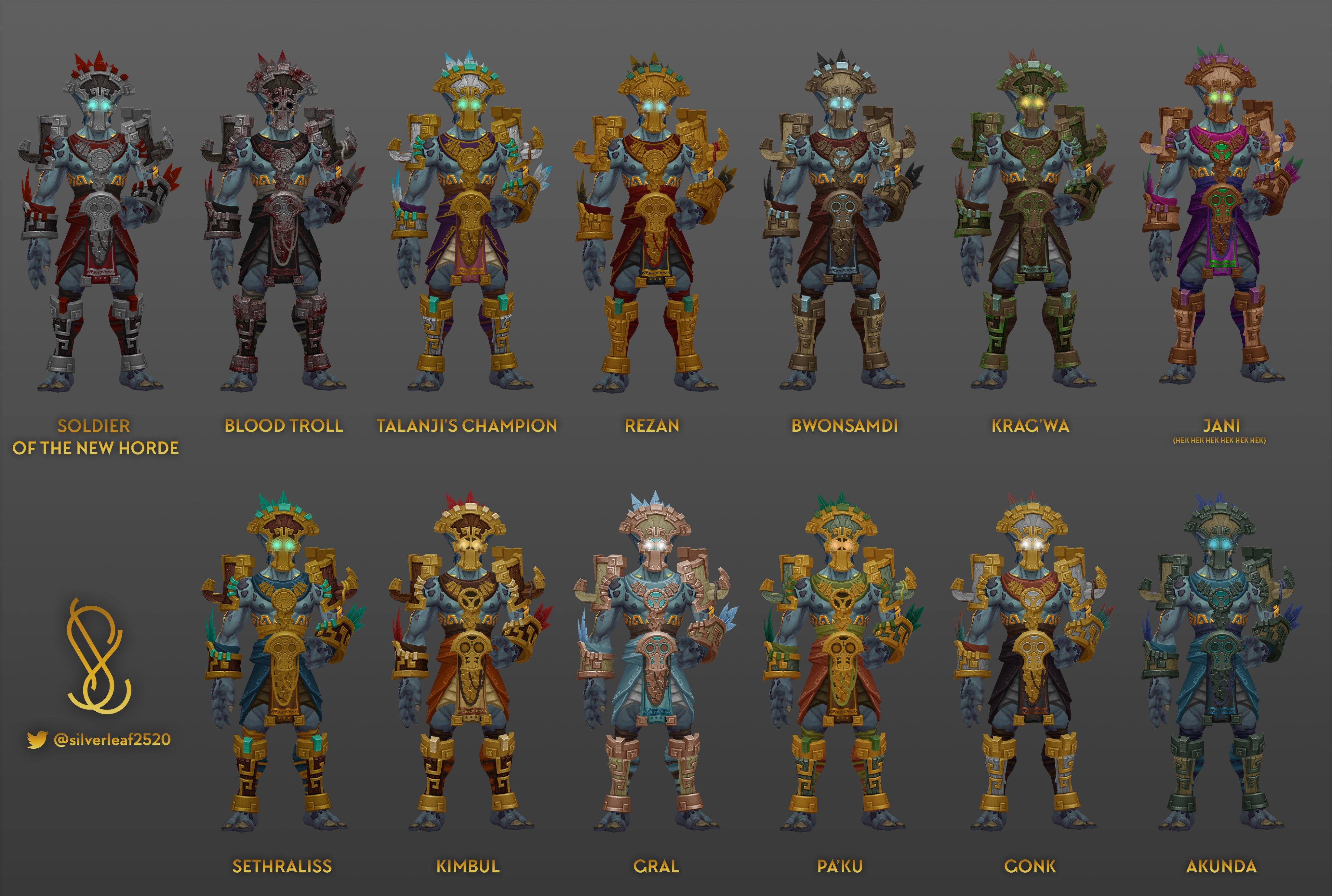 If we ever got some heritage armor reskins these would be a nice add for customizatoin for specific loas. 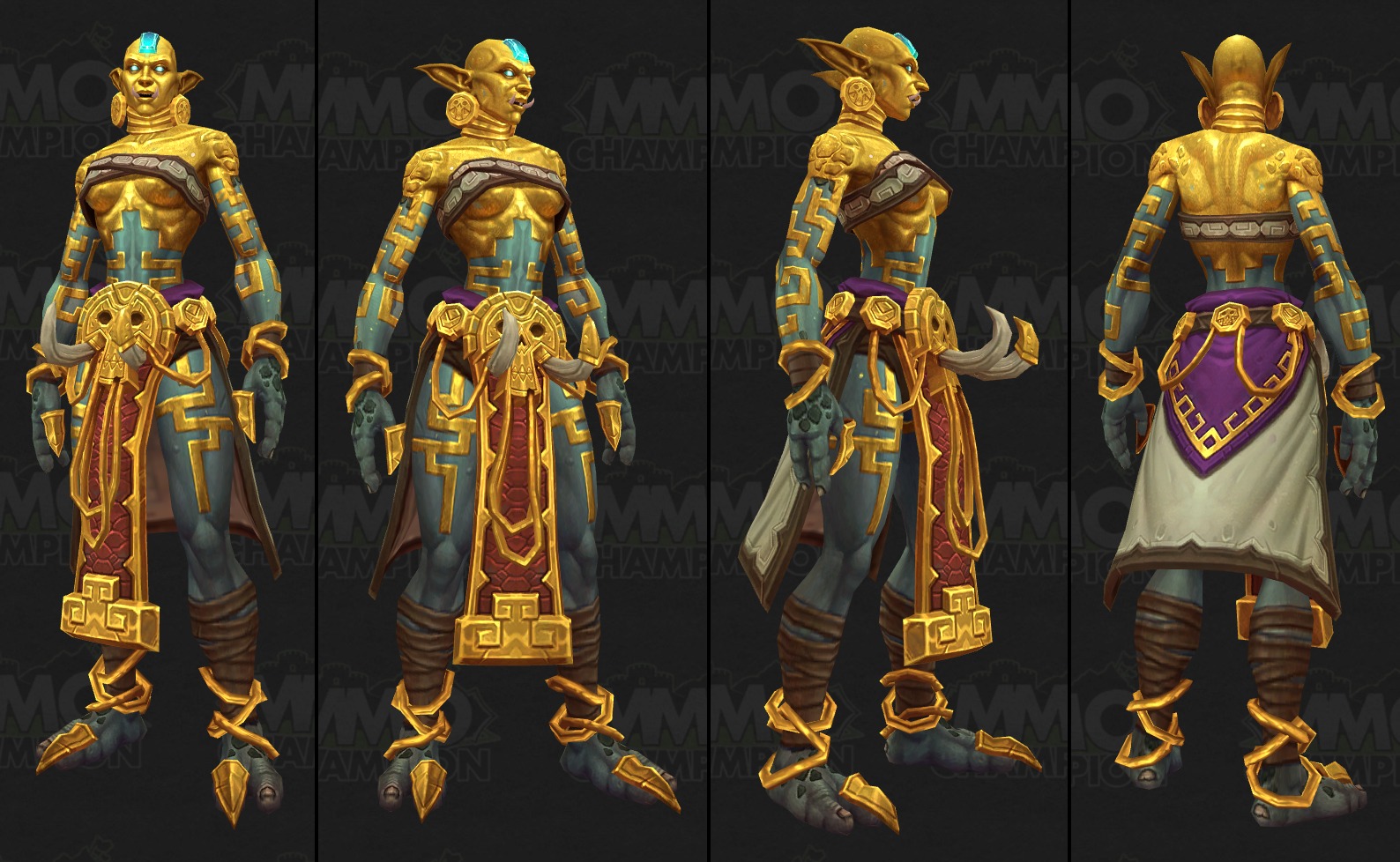 Would be nice to get some footwear options tailored to trolls as well. Such as this toe jewelry. Some Footlaces or something since often times we don’t wear boots. I wouldn’t mind having a type of troll sandal customization. And something to either hide or compliment the back toe.

Instead of the greek flair they can make it more Zandalari like as they did with the above boss.

Give trolls and orcs eyebrows, also give trolls beards.
both zandalari and darkspear.