Hi there, orcs are awesome and if you disagree you’re wrong. Orcs also have a lot of potential in regards to customization. Although I main HMT now and have mained Darkspear in the past, I’ve spent the majority of my time playing this game as an orc main. Because of this, I have a ton of ideas as to what could be made into orc customization.

It should also be noted that I don’t expect even 10% of these things to become a reality, nor do I expect Blizzard to look at this thread and actually go “yeah we should do this”, but I still want to toss all my ideas out.

First of all, many people have suggested a sub-race idea in various forms. I love this idea and think the best iteration of it that I’ve seen is the one by Sigfrieda on the EU forums.

Many people are pointing out that some allied races feel lacking in terms of customization. Others are saying that whatever additional customization we are given for the core races in Shadowlands, it won’t be as cool as getting a proper allied race...

For who haven’t and aren’t going to read the thread, just check this image for about what it’d look like. 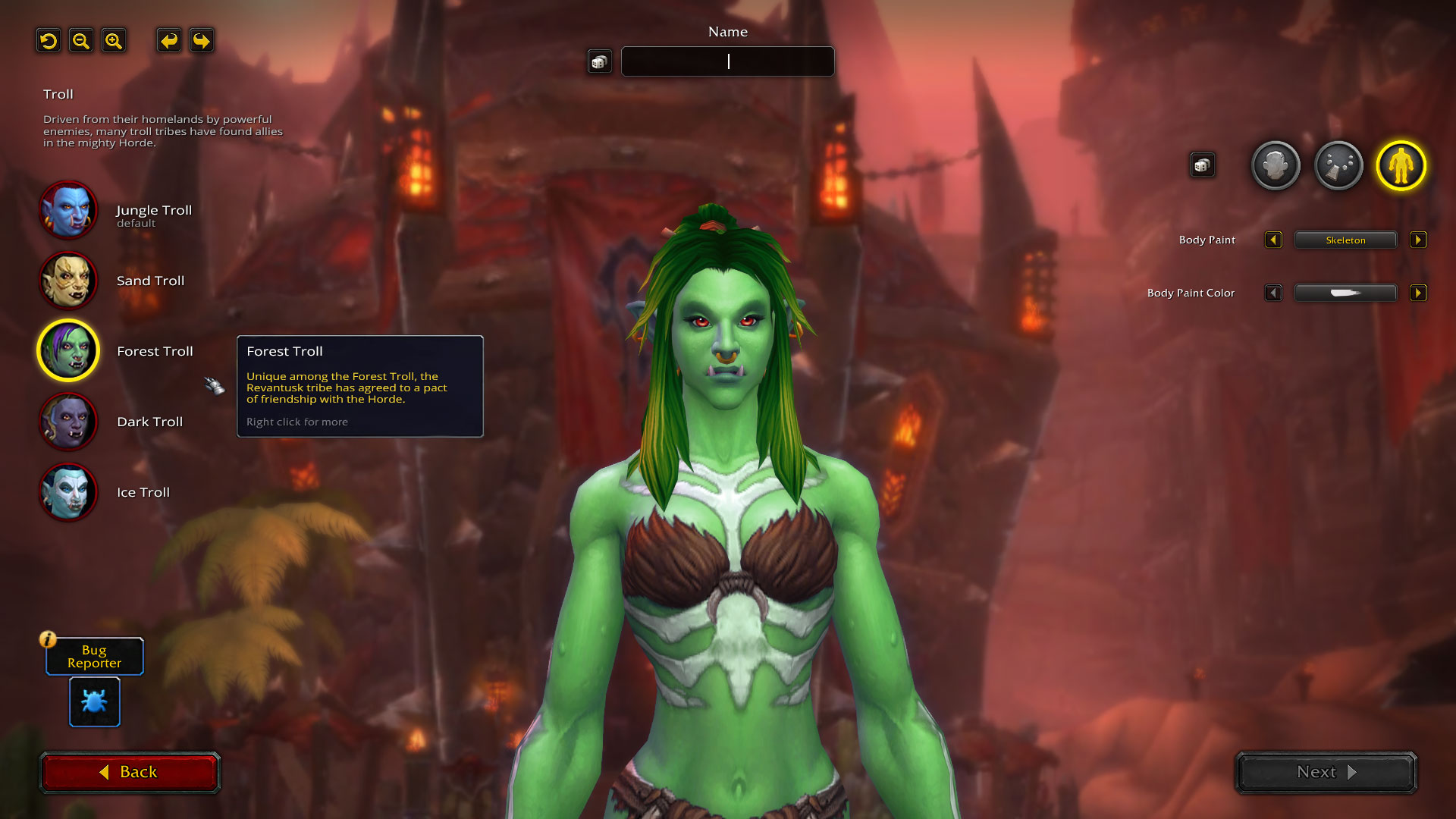 You pick the main race, then pick the sub-race. Each sub-race will have unique characteristics like shaman totems, customization, druid forms, etc. The only thing I’d add to this is unique class combinations.

With that in mind, I would add five sub-races to orcs: Mag’har, Mok’nathal, Ogrimmar, fel, and pale. Orgrimmar (aka our favorite greenbois with the greatest racial leader ever) and Mag’har orcs are already playable. Mok’nathal can have some decent cosplays made (just look at me), while fel and pale orcs are completely missing.

I will point out here playable that fel orcs do indeed align with the lore, as there are Horde aligned fel orcs by the Dark Portal. As for pale orcs, nothing says that they are a part of the modern Horde, however, they were a part of the Old Horde and did make it to Azeroth, meaning there is some potential for expanding the lore to allow for them to be made playable should they join the modern Horde in some way (something about their sanity would need to be done as well, for example, they could have recovered after the Cataclysm).

For all orc sub-races

Faces
This is a long-running and major request by orc players, improving our facial options, especially for males.

Male faces are all some combination of cracked, wrinkled, and angry looking. This issue is also present for some other Horde races like Darkspear. They also lack eyebrows, making them look incomplete. Fixing these issues would satisfy pretty much all orc players, myself included. A good idea of what improved faces would look like is Thrall and Kargath (especially if Kargath had eyebrows). I will also point out that eyebrows do make sense for male orcs and that Thrall is not the only orc with them as some people have incorrectly claimed. Here is a link to a post with several images of male orcs with eyebrows, some of them Thrall, most of them not.

Some other improvements for faces:

(All of this clan stuff could be expanded to Ogrimmar/fel orcs as well, but it’s most impactful for Mag’har.)

Thumbs up for all your work.

I like most of what you have (for more than just Orcs) but I’m not sure Fel Orcs should be an option (personal canon btw).

OP you forgot one of the most important things.

How is Thrall gonna be able to walk around with his perfect eyebrows and continue his flexing on normie Orcs?

I mentioned eyebrows in the paragraph under faces in the part for all orcs and linked and old post of mine with some examples.

I don’t know how I missed that lmao

I love the idea of the sub-race customizations for Orcs. I was rather annoyed when they introduced Mag’har since Orc players had been asking for years for a Mag’har sytle customization and I still cannot see why they would make just an alternate look for Orcs into a race. I really do dislike Allied races, there isnt one (aside from Vulpera) that couldnt have been sub-classes of the main races. Even Kul Tirans could have been a sub-race of Humans.

So yes, love my big buffy Orcs and would love to see the sub-class idea used.

Orc demon hunter you say? Hold on a second, I need to remove my eyes after reading that. I don’t need sight anymore.

Generally speaking I take these threads as repositories for requests for the races not demands for them to go before or after any other race.

Blizzard needs to know what people are interested in per race and players are not the ones who will decide what comes next.

Definitely support this thread! Adding to my megathread guide. Hope you folks get what you want!

Tusk rings for both genders.

Don’t get me wrong Im all for everyone getting customization but there are races like Worgen who badly need some options, in comparison to others they are badly lacking and when popular races ask for stuff it seems they get it while the other continue to lack anything even so much as a word from Blizzard.

Wanted to throw in my support as well. Customization is very important when it comes to player characters and it should be something that continues to evolve as time goes on. It can go a long way in getting players really invested and interested in their characters.

Orcs have a lot of potential when it comes to customization options, and I’ll be curious to see suggestions presented in here.

My favorite Horde race and gender are:

Orc Paladins please. I just can’t enjoy WoW until I’m able to play my favorite race with my favorite class.

I would start a worgen customization megathread and keep it going in that case. I’d support it myself and maybe toss a few ideas in. I hope to see more customization across the board, myself. It’s okay to ask for stuff imo. Better for people to ask for what they want, some likely just haven’t started such a thread (aside from tails) since it can be a lot of work. If there’s a thread up I missed, feel free to let me know and I’ll add it to a megathread index I have.

Edit: Oh wait a friend of mine linked it to me, I’ll go post it in the index

Don’t get me wrong Im all for everyone getting customization but there are races like Worgen who badly need some options, in comparison to others they are badly lacking and when popular races ask for stuff it seems they get it while the other continue to lack anything even so much as a word from Blizzard.

Don’t know about you but I’ve never gotten a response from Blizzard for my wants. (high elf folk did though.)

They treat us all poorly, we don’t need to turn on ourselves.

I would start a worgen customization megathread and keep it going in that case.

Technically there are two going.

I support the Give Worgen Tails one myself.