The following thread is a continuation from the previous Megathread created in April of this year.

*Disclaimer: This is the Official High Elves Allied race mega thread, We want to respectfully keep the discussion to stay in this mega thread. As it stands we would like to keep it respectful and for the discussion to focus on the developments and the story of Quel’dorei (High elves) since the last mega-thread. We do not condone trolling from either side both for and against.

The High Elves of the Alliance are a subrace of Thalassian Elves formed by many groups of High Elves aligned with the Alliance over Azeroth and Outland. Despite people associating them with the Blood Elves from Quel’thalas, those High Elves remain as a distinct group as they didn’t follow the same path as Kael’thas and the rest of their kin, preferring to remain in the Alliance and keep referring to themselves as High Elves.

In World of Warcraft they are present in many places and events as part of the Alliance, their main faction is The Silver Covenant, which is still in active as their mages maintain the portal to Dalaran in Stormwind. Representing the Alliance in the Argent Tournament, taking part of the Purge of Dalaran and leading the offensive in the Isle of Thunder are among their most important feats to the faction. In Legion they were one of the main forces in the Hunter Campaign and in the liberation of Suramar. As for BfA, they are mostly represented as mages, mainly in the 7th Legion as the Silver Covenant is so far absent.

The Allerian Stronghold is an Alliance settlement in Terokkar Forest built after the Second War by High Elves from Quel’thalas that volunteered to fight with the Alliance all the way to Draenor. They were led by Alleria Windrunner herself.

The Kalimdor High Elves are a group of elves that followed Jaina into the continent after the downfall of Lordaeron due to the Scourge. After the Battle of Mount Hyjal, they assisted Jaina in building Theramore and fought under it’s banners as long as the city stood.

There are also High Elves from lodges around the Eastern Kingdoms, namely the Quel’Lithien, Quel’danil and Farstrider lodges. They are composed by more nature inclined High Elves and skilled Rangers. - Written by Mowachassa (US)

Quel’Danil Lodge: The Quel’Danil (Thalassian for Highvale) High Elves are a group of Quel’dorei whom abandoned the practice of arcane magic following the Third War. In Vanilla World of Warcraft they were an Alliance friendly outpost targeted by the Horde players on behalf of the Revantusk. In Cataclysm, Quel’Danil remained strong and was bolstered by the addition of Draenei who came to the Hinterlands to study the Light.

Allerian Stronghold: The Allerian Stronghold is a home for the High Elves who followed Alleria Windrunner and joined the Alliance Expedition to the Orc homeworld of Draenor following the events of the Second War. They are led by Captain Auric Sunchaser, who has appeared at Quel’Danas as a representative for High Elven pilgrims visiting the Sunwell.

Dalaran: The fabled city of magic and learning, Dalaran, is home to a number of High Elves, and previously acted as the Headquarters for the Silver Covenant. Historically Dalaran has been the center for a gathering of magi, and there are still High Elves in the ranks of the Kirin Tor.

Stormwind: The capital city of the Alliance has a number of High Elves within it’s walls, with new NPCs having been added recently (7.3.5). - Written by Alurna@Moongaurd

Shamans and Druids have the potential to be available classes for High Elves as a result of the Quel’Danil High Elves, who have given up the practice of Arcane Magic, and are long time friends and allies of the Wildhammer Dwarves, whom practice Shamanism, and may or may not practice Druidism. The abandonment of arcane magic by this faction of High Elves could leave room for them to seek other powers for survival. - Alurna@Moongaurd 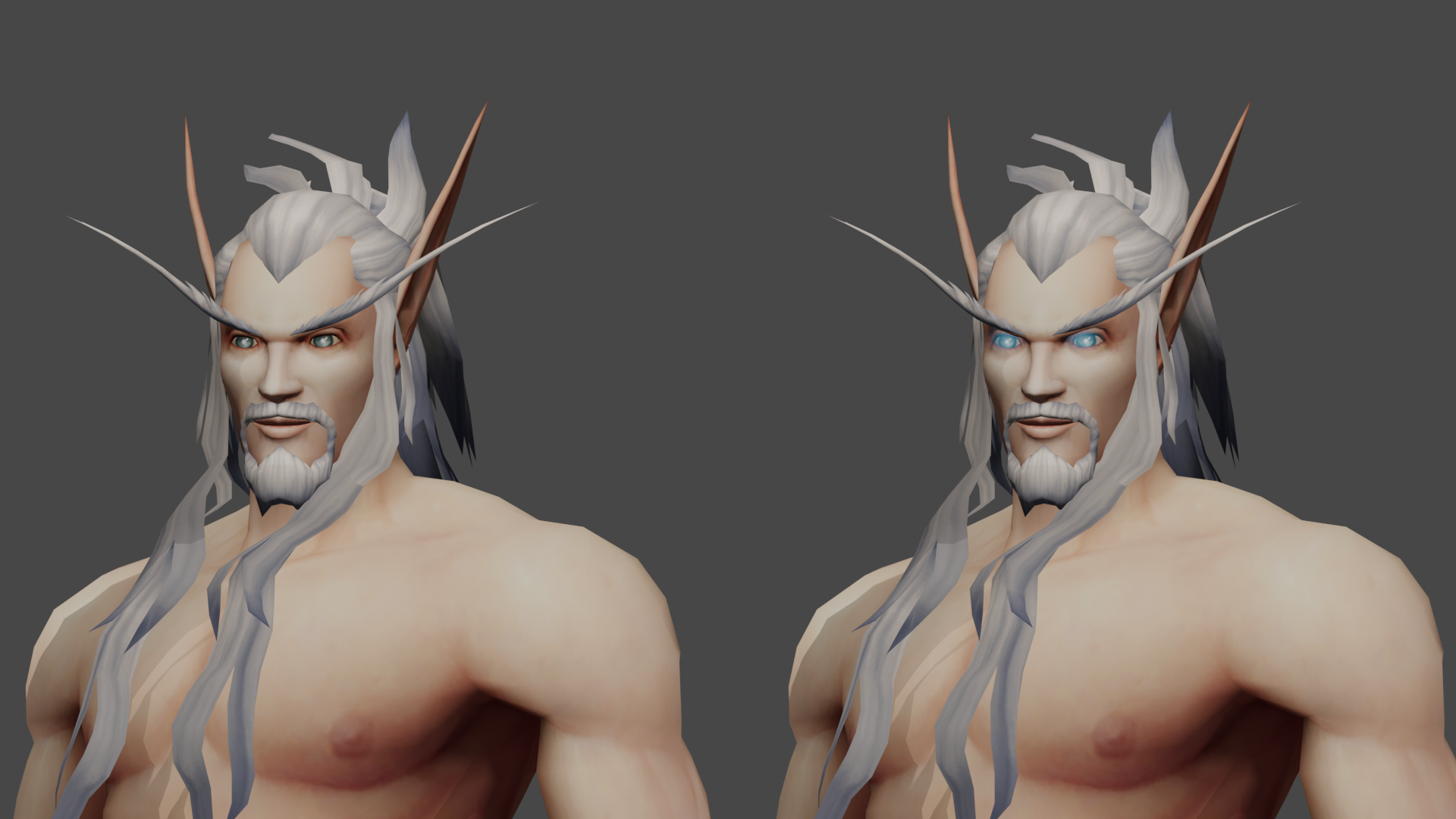 Comparison between the Blood Elf Model and High Elf Concept: 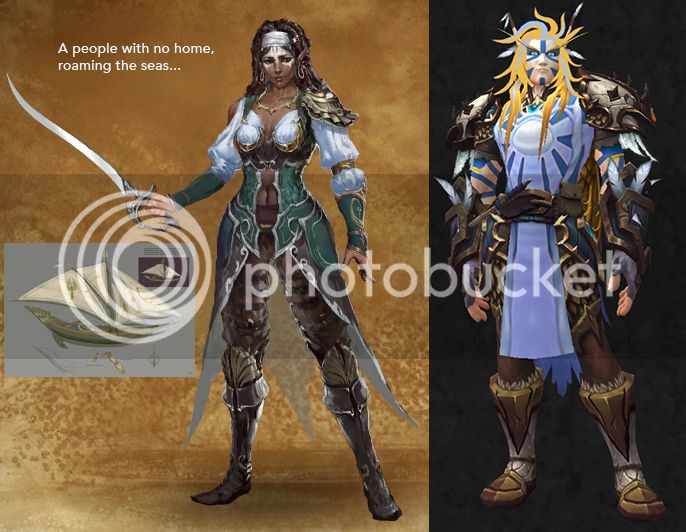 Hair Styles: High Elves could be given a range of different hair styles. High Elves from places such as Highvale could have ranger-esque styles such as a braid for example. Those from Dalaran could have Human influenced hair styles, a mixture of both Thalassian and Human.

Hair Colours: Hair colours for High Elves could range from Blondes, Browns and potentially Blues (as there are few High Elves with blue hair - of which are not available to Blood Elves).

Tattoos/Warpaint: High Elves could be given tattoos similar to Alleria’s to help distinguish them from Blood Elves. Arcane Runes could also be added as reference to Mages.

Jewelry (Females): High Elven females could be given feathers as well as simple silver necklaces or earrings.

Facial Hair (Males): Male High Elves could be given a range of facial hair, long and short as well as thicker styles.

New Idle Stance (Males and Females): New Idle stances can be given to both Male and Female High Elves to differentiate them from both Void Elves and Blood Elves. 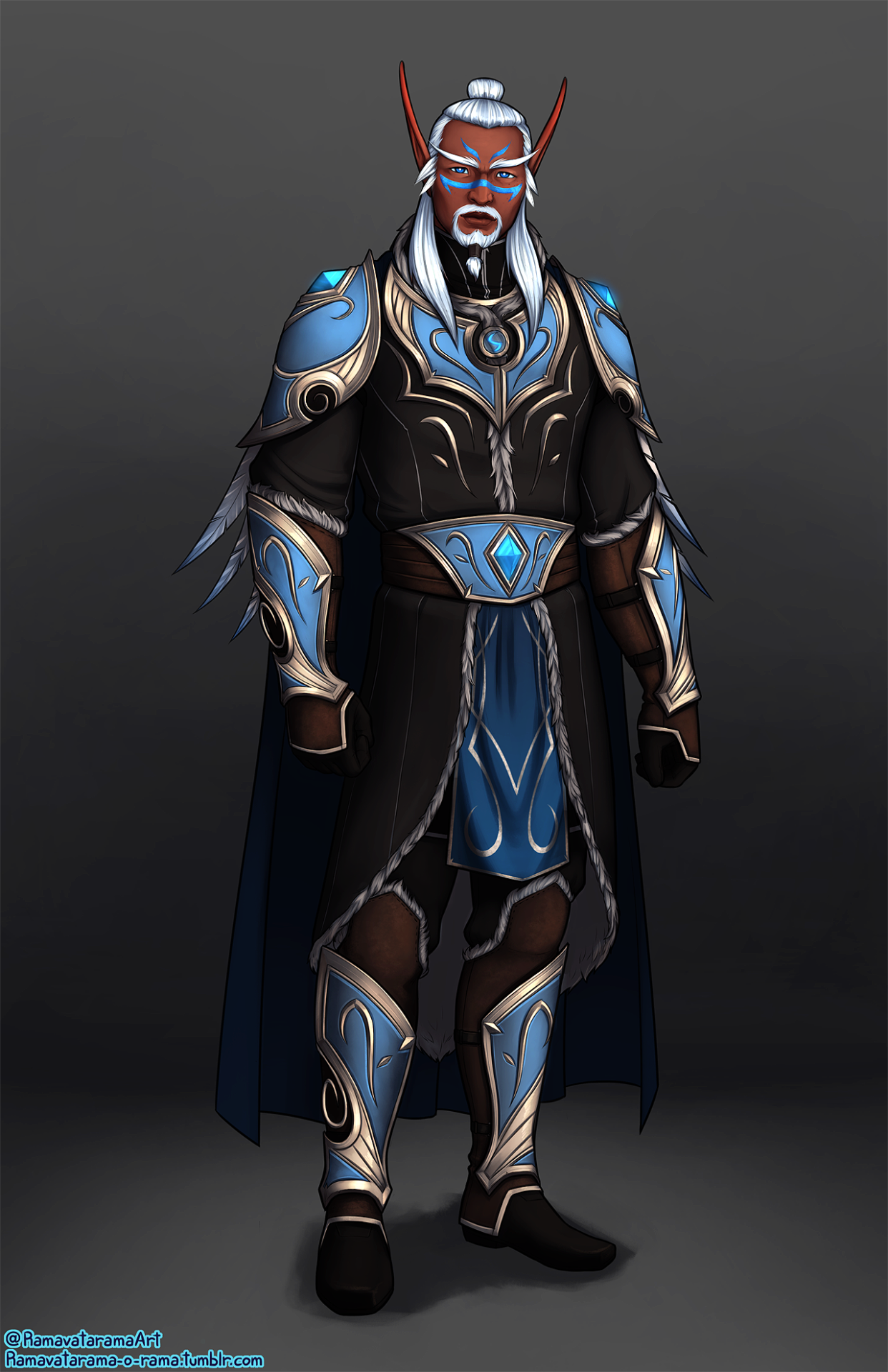 Suggestions for a recruitment scenario

Going to all places with High Elves to assist and unite them into a single banner, maybe find a island on the coast of the Eastern Kingdoms to form a new kingdom of their own. Gathering spellcasters and important artifacts that are part of their history to execute a ritual that dissociate them from the Sunwell, starting a new chapter in their story. Calling them to elect a leader such as Vereesa Windrunner, potentially renaming them to Silver Elves as they want to made a new identity for themselves within the Alliance. Develop relations with the Void Elves, as they are also Thalassians and are led by Vereesa’s sister, Alleria. - Written by Mowachassa

Unification: Player Characters join a named major NPC (Alleria/Vereesa/Tyrande) on a mission to visit the major settlements of High Elves and see them joined together under a single banner.

Silver Covenant: The Silver Covenant seeks to replenish it’s ranks and begins recruiting promising Quel’dorei around the world, joined by the Player-Character, aiding the gathered characters with their local threats.

Highvale: The Quel’Danil Lodge comes under attack by the Horde. The Player-Character goes to their defense, and the Lodge thereafter pledges it’s strength to the Alliance in all of it’s battles.

Alliance Expedition: The elves of the Allerian Stronghold organize and come home at last, rejoining their kin and reminding them that the Alliance is a cause worth fighting for. Their leader would then pledge the service of the Expedition’s High Elves to the Alliance on Azeroth. - Written by Alurna@Moongaurd

Overview of what has been done to High Elves in BFA

4.1 = Rise of the Zandalari - The Silver Covenant takes part.

Warlords of Draenor = Not featured.

Archmage(US) has created a list of screenshots about High Elves in game: 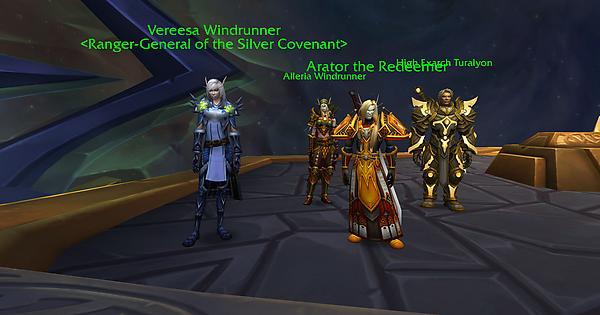 The following are quotes have been gathered by Alamara@Goldrinn

The following are comments from Members of the High Community with relation to High Elves:

These are potential suggestions, however it would be fair for the Horde to decide what AR they would hope to get.

If you would like to view High Elf concepts for an Allied Race, you could visit our Tumblr page:

Platform for sharing conceptual arts of the High Elf community in World of Warcraft.

You can also read more on High Elves here: 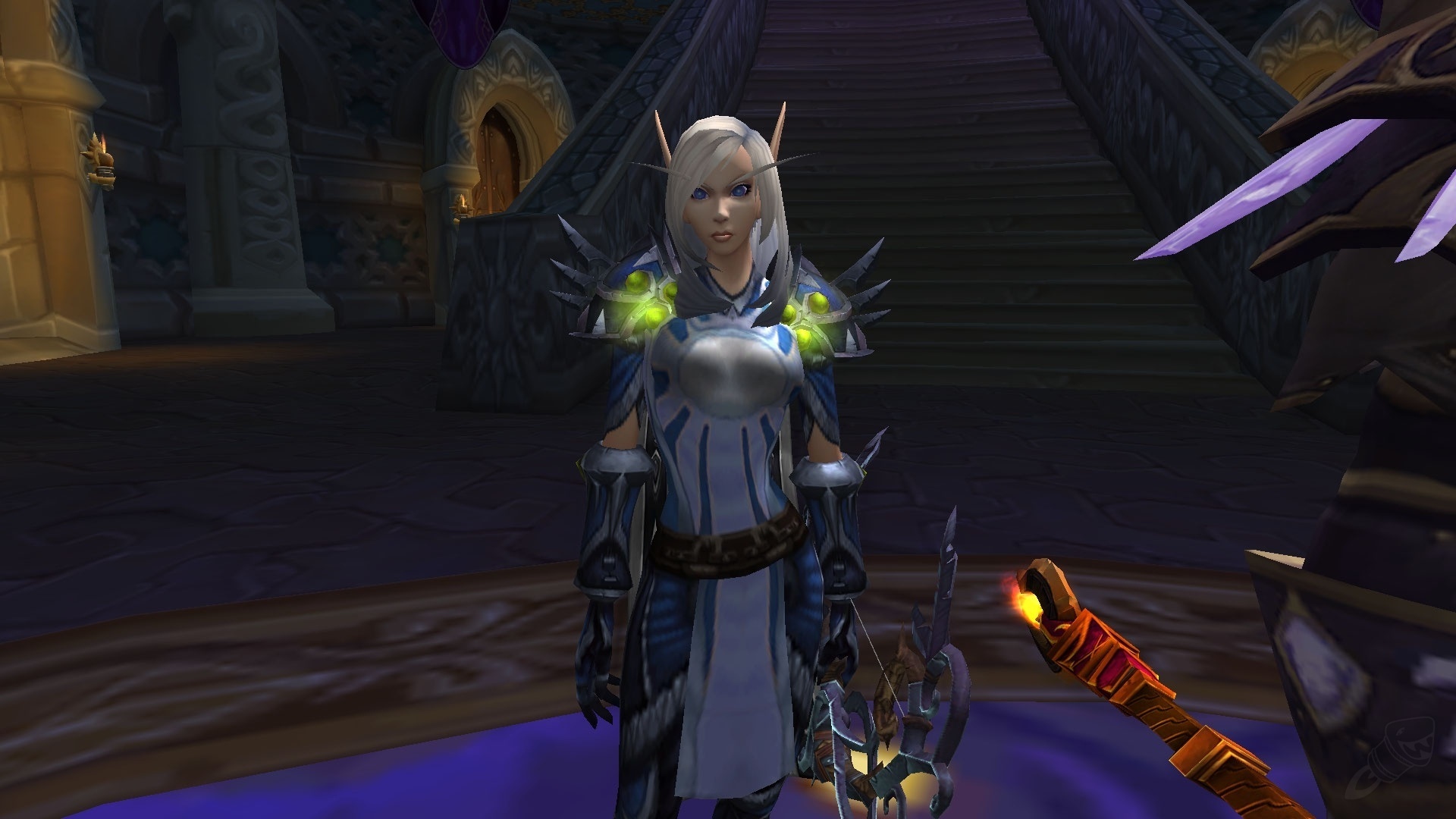 The Discussion Surrounding High Elves as an Allied Race

At the recent Battle for Azeroth Q&A, Ion addressed the question of playable High Elves as an Allied Race. This was one of the most controversial replies at the Q&A, generating lots of discussion around the community, so we're examining the...

If you’d like to join a place to discuss High Elves, you are free to join the community Discord

Join the Legacy of the Quel'dorei Discord Server!

Check out the Legacy of the Quel'dorei community on Discord - hang out with 572 other members and enjoy free voice and text chat.

Icon of Endurance created by Azrathel(EU)

Massive thanks to ALL members of the High Elf community who had made this thread possible!

From now till the end of time you will have my support.

You guys got a good thing going here. I wish you luck in your efforts.

My support for playable Quel’dorei for the Alliance!

I am happy to see the new thread up! Thank you Casmir!

The wheel turns yet again.

Found something that should be familiar to to regulars of the this and the previous thread.

The following EU thread is a continuation from the previous Megathread created in May of Last Year. *Disclaimer: This is the Official High Elves Allied race mega thread, We want to respectfully keep the discussion to stay in this mega thread. As it...

Not sure if the same player as Casmir or acquainted with them. Posting date is after Casmir’s post of the last thread.

Either way, High Elves seem to be getting less love in EU forums than here.

What is dead may never die!

^kinda sums it up, really. Welcome back, folks. You’ve got my support as always.

This is never going to happen. They’re not going to add a lore sidelined fragment group of a fragment group with the same character model and skin tones as an playable apposing faction race to the alliance. It’s doesn’t make any technical sense, or lore sense, and they already gave void elves to the alliance as the final solution to this problem.

Seriously, no one wants to play world of elfcraft, elfheim online, elfquest, the elf scrolls online.

Always have my support. The kneelers will say otherwise.

A lot of people here disagree with you. No other idea has been controversial or supported has High Elves.

No one is forcing you to play High Elves. Let people have their fun

One thing that might be a good addition to the top of this new post is a link to the previous post for the sake of posterity.

Not true at all. You could say the same thing about pathfinder or raid finder. I also already mentioned how it affects me. We need less elves, not more. The horde has more blood elves than orcs. Does that make sense? #nomoreelves

That thread is reaching limits that we simply cannot work around. Feel free to start a new one. It doesn’t look like we’re going to be able to keep the big one open.

What’s the point if it’s locked? This should be enough to let people know about why this is a continuation

For the first TIME! I’m not LATE! FINALLY!

They can defy us, they can forsake us, but the Quel’dorei will endure as long it takes!

I’m with you guys, as always.

Gameplay does not reflect lore.
Pathfinder and LFR is controversial to be sure, but nowhere near has supported or controversial due to the fact that this is the 3rd time we had to post a new Megathread, with both previous times almost hitting the 20k cap.
Your stance on elves is an opinion not a fact
Elves have always been the popular fantasy race.
The true key to diversity is to add more elves believe it or not.