The State of Heroes of the Storm A.I

Hello, and good day to you all!

My name is Kevin Gu, and I am a Senior Designer on the Heroes team. I have been working alongside Jeff Beaudoin, our Lead Gameplay Engineer, on our game’s A.I. We wanted to take a moment to update you all on where we are and how our three major A.I. initiatives are progressing.

Reconciliation of the Goal and Tactical Systems

Moving forward we will be reverting some of changes made in the last major overhaul and restructuring the Tactical A.I. behavior tree. We are reinforcing the intended separation of the Goal and Tactical systems, and will be paying closer attention to make sure that any future changes do not disturb this delicate balance of power. This will reduce the frequency of agents being pulled in two directions at once, most commonly observed as agents rapidly bouncing back and forth in place. This work will also allow us to more quickly diagnose the root cause of misbehaving agents.

Our second priority is to improve A.I. agents’ understanding of “laning” and how they approach pushing and defending those lanes. In the most recent patch, we added logic that allows the Goal system to understand that lanes pushed closer to a core are usually more valuable to defend. Our next step is to include units within each lane to further modify how valuable lanes are to defending agents. Both pieces will ensure that the A.I. will better understand how to defend their lanes.

Our third priority is to improve the ability for agents to prepare or “stage” for their assigned Goals. Our internal Tactical A.I. tree can now better determine if all assigned agents to a goal have arrived. This allows agents to intuit if they should wait in shrubs because their team members are not yet near their collective objective, and subsequently helps agents work together.

We want to extend a big thank you to those who have shared feedback on A.I. We hear you! We are hard at work improving the A.I., and plan to bring the items mentioned above and more into the next major Heroes patch. Again, thank you for your continued patience, and we’ll see you in the Nexus!

103 Likes
Heroes of the Storm Has Really Changed
So tired of this crap
The last hope of hots
Hammer: ban or fix AI pls
Make it so ai prioritizes winning the game plz
AI teammate / leaver = autolose
New AI system is TRASH
Team Role when Face AI
Your Ai is useless
Replace the AI with a robot that follows you
AI Mode is Unplayable
Multiple Bugs and a request
Forced 50% Matchmaker Theory
Why did they remove leaver AI?
Execute Orders talent on aram
Why bot which replaces leave players is absolutely useless?
The A.I. in this game is garbage, at least the allied ones are
Bot system is a big joke
Please do something about the literally retarded A.I. for allied bots
Shapeshifter-21359 February 7, 2020, 8:34pm #2

Awesome to hear the team still works on this game despite being in maintenance mode. I never play AI but understand a huge chunk of the HotS population only plays AI (and it shows on the forum).

They deserve improvements to the game just like SL, QM and Brawl players.
Some AI’s have recently been atrocious, they just hearth, cancel, hearth etc. indefinitely, nice if that gets fixed too.

This is the kind of connection to the community we need. Keep us up to date. Great initiative, keep going.
Happy to hear you are improving the AI.

Can we add a vote to surrender button please?

“May I give you some insights what we are currently doing with the AI…”
“SURRENDER BUTTON WHEN???”

This. No wonder blues avoid all blizz forums on all games, instead of being on topic they start asking for completely different things like a beggar.
The topic is about AI.

Hell yeah. AI has sucked for years now. Bring on the changes. Maybe finally if a teammate disconnects it wont feel an additional punishment with a bot running in circles and trying to hearth every five seconds.

Great so see that you are working on the AI system. Thanks for the update!

a bot running in circles and trying to hearth every five seconds.

My top highlights regarding AI are the following:

Both were more funny than sad tbh.

Relevant blog post that has a hyperlink to this topic. 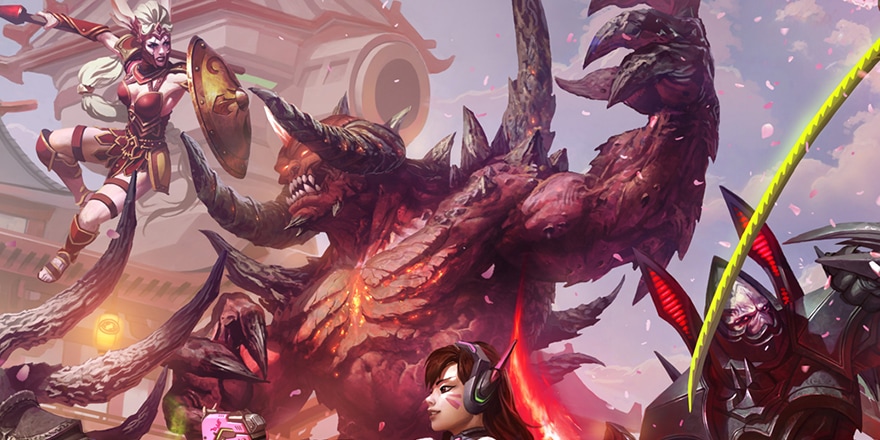 Meet the biology major evolving the Heroes of the Storm A.I. to combo you to...

Senior Designer Kevin Gu takes great joy in moments when the Heroes of the Storm A.I. dunks on him during playtests. Maybe a little too much joy.

Biggest issue I have with AI is that they over-extend to push/protect a lane, way past wherever the skirmish line might be. In general, AI is easy to catch out of position. Fixing this one issue might greatly mitigate having an AI teammate due to a leaver for whatever reason.

I would also like to see AI be smarter about responding to pings to follow you; they like to either heart and come from base, or shoot a straight line regardless of vision and enemy location.

AI needs a lot of work imo, it’s just too punishing, especially in ranked matches, when a teammate leaves for whatever reason.

I once played a whole game with a bot Valeera cause the player left instantly after loading screen. So i pinged her as Alex and made her follow me. When i took camps she would just auto attack a few times and then stand still doing nothing again. Even in teamfights she would attack the nearest target a few times just to go afk again right after. Lucky for me and my team we won the game with a low dmg bot valeera. Hope they get AI fixed ASAP.

Lucky for me and my team we won the game with a low dmg bot valeera.

According to the forum consensus you are lying since winning with a bot is 100 % impossible.

Great to hear that the AI is being improved! I was getting mighty tired of seeing them dancing around just inside Fort range and losing 75% of their health before they finally realized they were dying.

Can you also address AI instantly picking up items from the camps on Hanamura and Volskaya, please?
It’s really annoying to be capping a camp and then have an ally AI run up and steal the turrets and healing beacons right as they spawn before we have time to click on them.

This is a multiplayer game first and foremost and it should be treated as such. I believe the resources at your disposal could be utilised for more important aspects. While it is amazing that you finally have some improvements as you would put it, I don’t believe many players share the enthusiasm.

Bots are boring, they follow specific patterns, often get caught up in them and completely tilt. What an average person might consider as artificial intelligence is only a preset list of functions with corresponding priority system that they will follow to the letter, often against all human logic.

They can either stay completely useless and not feel as an addition to the team, or they could be written in such way that they never miss a certain skillshot, combo one crowd control perfectly after the other in order to avoid overlap of effects and optimise the time the target will spend disabled. This is only an illusion of the difficulty and playing against such opponent only becomes frustrating after a while, considering they don’t suffer from fatigue, lag and lack of team coordination. There is no element of human randomness to it nor can you recreate this key feature. This is what makes matches interactive, fun and enjoyable.

For advancement this may lead to in other areas outside of the game and looking at it as a personal accomplishment, it’s fantastic what you are doing, but I don’t see it benefiting this game in any way. More than often I would prefer for a bot that took over a disconnected player to stay anchored to the spawn area rather than him receiving updated commands in order to achieve simple concepts such as soaking a lane.

With polished enough AI, at what point does it become preferable for me to just ALT+F4 out of the match so my team gets their chances of winning increased? I think this more than enough answers all the concerns an average forum reader may have.

With the promised separation of ARAM from BRAWL mode, this could lead to some fun and exciting custom scenarios such as the Zerg survival maps. However I don’t see any future in the useof AI for regular game modes because that’s not what this game is about.

i’m just happy that the AI aren’t omniscient anymore and wont 5-man zerg you when you start taking a merc camp that they can’t see.

No thank you!
Can you make it so that they wont instapick items? Now when you doing the turret camp or the heal they pick it up with unhuman speed and never use it

Thank you so much, KGu!

While improvements to enemy AI are always appreciated, the biggest frustrations I’ve had with AI in Heroes over the past year have been with friendly AI.

One of the best pathways for making friendly AI smarter would be to improve interactivity with friendly players. For example, the only reliable way to achieve this right now is to ping CPUs to leash them to a player. This behavior works reasonably well for support CPUs, but for other types it’s a little restrictive, though not inherently bad (it does keep them from roaming, mostly).

What would be more impactful though would be to improve how responsive CPUs are to other types of pings (or, if possible, to even add new command and control mechanisms). Chief among these concerns is getting CPUs to reliably assist with objectives, camps, or so on. While I am hopeful the work you are doing will improve CPUs’ baseline decisions in these areas, the upper-end solution is to enhance player control, as even if the CPUs end up following best-practice or operating off of other, higher-level insights, if the actions they take as a result fail to coordinate with human teammates, then the actions will ultimately be “dumb”.

All this said, I can tell you’re working hard, and it’s appreciated!

You’re welcome for the feedback, and thanks for working hard to improve the A.I.

Can you also address AI instantly picking up items from the camps on Hanamura and Volskaya, please?

Yes, this is something that I have fixed for the next release.

Epic! No more of those silly situations where the AI picks and doesn’t even deploy it once.

As a long time VS AI player 16,000 games vs AI PLEASE MAKE AI STOP IGNORING SGT HAMMER !!! PLEASE PLEASE PLEASE FOR CRYING OUT LOUD I CAN TAKE HAMMER AND BLOW UP EVERY BUILDING ON THE MAP AND NEVER NEVER see and enemy or be threatened by the AI.

Its gotten so bad whenever I see a Hammer in game its and immediate, “why bother playing hammer will win in 9 minutes.” seriously this NEEDS to be fixed !!!