Allow cow level to be made post-King kill

Edit: Tweet confirmed cow king can now be slain and still open the portal. Congrats to everyone here, we did it! 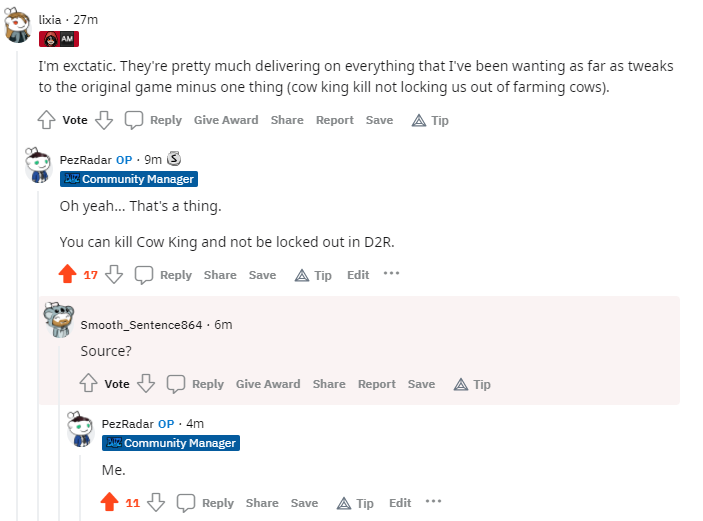 As the title suggests, I’d like to advocate for a #change here.

In Diablo 2, when the Cow King is killed, everyone inside the Cow Level is instantly blacklisted on that character from ever creating a Cow Level again on that difficulty. I wish I knew the design philosophy behind this code, seems like a bad design in my opinion, given that the Diablo 2 end-game is all repeat farming of specific zones/bosses. It’s implementation is prohibitive to group play, allows for intentional and unintentional griefing, and forces awkward toon hopping.

There is an ‘alternative’ solution in game. Which is to have an alt that has never killed the King create a the portal, than swap to the character you want to do the Cow Level with.

I propose that rather than have to deal with the annoyance of the alternative, that you simply remove the mechanic that blacklists Cow Level when the King is killed.

I’d LOVE confirmation from the team that they’ve considered this topic and what their conclusion will be.

Would be a good change…

Did anyone watch the round table discussion with the developers? They have already said tha they aren’t changing any game mechanics from the original. In the original if you killed the king you couldn’t open the runs anymore. That’s going to continue being the case. The game is going to be the same as it was in every way except for the shared stash and the auto-gold pickup option that they added (mostly because of it being needed when controller support was added).

They are also looking to fix some bugs that are unfair to the player in pvm, like invisible projectiles or invisible poison clouds that instantly kill the player. Stuff like that will get fixes, but everything else will be the same.

this change even purists must agree

I don’t agree with it. I don’t want anything changed to take away from the feel of the original game in any way.

This should be the Diablo 2 that we all know and love, not some edited version of it.

They pretty much said that if people already commonly use a workaround, then they might as well make a change to it.

At least this was their reasoning for the shared stash.

And since you can simply open the portal with another character, they might at least consider doing it.

You love not being able to run Cow games because someone in a public game ruined it for you? Or you mistakenly killed the King with offscreen aoe? How is your experience lessened by being able to kill the King?

Several changes have been announced, and they use the ‘there were workarounds anyways’ to be convincing. The same case is being made here.

So, how then game will stop players from entering cow level?

Once you cleared Diablo on that difficulty you should be able to enter.

If you have killed Baal (LoD) or Diablo (original), gathered a Wirts leg, a tome of town portal, and a cube, you should be able to create and enter the portal.

But this level has too high drop rates, this is cool easter egg, but clearly unbalanced, I think it must be cleared 1 time, and after that closed for this difficulty.

It doesnt have high drop rates of anything in particular… And the exp was nerfed in 1.09…

It’s similar to Chaos sanctuary in mob density. The balance is irrelevant, there are simple workarounds to opening it endlessly. Its just a QoL feature to not be locked. In current D2, you can clear it infinite times, it never closes permanently from an account perspective, because you can always annoyingly create an alt to open it.

If there are no changes to this, it simply adds 15 seconds of time character hopping to open a new portal. But thats the point of this post, to get those 15 seconds back and not have to use the workaround… Just like not needing to use mules as a workaround, so they added a shared stash.

Cow level was absolutely NOT an increase in drop quality or quantity over the rest of the game.

Additionally you do know that characters can clear cow level an INFINITE amount of times right?

yeah, I know, but Cow King death is a thing that makes it harder. For me harder = better. I dunno, I think this is not a gamebraking mechanic, and they said they will not change stuff like this.

But it’s not really ‘harder’. Its more ‘annoying’. Harder implies more skill needed to overcome, which is a good thing. There is no skill involved to create a Cow Portal. Only annoyance of toon switching.

Its not worth the semantic battle because its comes down to opinion.

Agree, its not worth it. Thank you fo your opinion.

Everyone keeps talking about toggles. Honestly, there are those of us who’d rather not have the exact same problems in 2021. I’d like to get and keep some fresh blood in here. Would be nice for them to update the game and have a toggle for the purists called “Purist mode” which is effectively something they can keep for themselves that will never be updated minus what has already been announced.

The rest of us who don’t run that, can have some QOL fixes that would keep the game more alive for another 20 years.