I am constitutionally amazed at this company.

I have no problem with easy travel., trust me,it would feel just fine This is not world of Portal craft. Make fun and engaging zones and encounters. Travel that gated and cumbersome is just frustrating and makes me want to log off.

The thing is we all know that Blizzard can’t make anything exciting out in the werld except for WQ’s and werld bosses. All this achieves is you sitting on a FP and going AFK while you wait to land.

Cool so it takes longer to get to an empty world. You want to get people out and about in non-current content? Introduce world quests in old zones or bring back legion pre-patch invasion style events back into game. With all this foreshadowing of a scourge expansion, I really hope that you all don’t just limit any potential invasions to just the pre-patch or for a short time like you did with the 1.11 and wrath pre-patch events. Keep those events rolling onwards throughout the expansion. Sort of like how you had deathwing randomly visiting zones in cata before 4.3. That gave a sense of life to the world. Portals and flying only facilitate a faster consumption of content, their removal won’t bring that old content back or make time-gated content (patch 7.2 weekly tomb quest) more enjoyable.

Here’s a nickels worth of free advice to you blizzard. You want to make the community feel more connected with itself? Stop adding new max level zones on expansion launch. Make the game more like how vanilla used to be where max level content existed or was hinted at while in low level zones. That gets max level players interacting with the community and not walling themselves off in their own theme park away from everyone else. It also solves the problem that people have regularly mentioned that the game doesn’t begin until you reach max level. I can understand that 7.3.5 level scaling changes were meant to ease the gap between players of different levels. However its introduction has made people (reading on reddit, forums, in game, and online) feel like they aren’t gaining any power as they level (level scaling cause of OP 110/111s) to 120, and in fact feel like they are losing power like Arthas in late WC3: TFT.

And on the statement of no new content at low levels. Excluding racial leveling zones (last time was 5.0), and the cata revamp (based on prior work but that doesn’t mean that it was easy to do), the last time I can remember wow having new quest content for low levels was patch 2.3 with the extra quests in Dustwallow marsh. I loved doing those since I was at that level range and because it something new. Even though the end goal of the game is to get max level and most times you can’t lose levels (barring missing a few expansions and having experience loss cause of the 4-5 experience changes we’ve had since patch 2.3), that doesn’t mean that the only new content has to be created for max levels. Make something interesting that characters of all ranges can enjoy (to break up the quest boredom since dungeon running is rather discouraged since last year). The overworld warfront zones could have been so much more than they are right now, if only they weren’t limited to 120s. I will say this again. The legion pre-patch invasions were fun because it gave me a chance to participate as a low level with hundreds of other people, while being able to get stronger in the process (not like darkmoon or most other holiday events). I know that people are going to straw man my love for the invasions because of easy experience gains but just the thrill of being in a mass of people while you try and avoid potential one shot mechanics, kept me wanting to go for hours and on other characters. The anniversary bosses are also great overworld group content as well. Legion zone invasions in the broken isles were great as well.

In short actually add something or anything to the zones not used in bfa. And make it worthwhile and give it some purpose (not an azerite mechanic that’s going to become obsolete once 9.0 pre-patch comes). And definitely don’t make it just some mount/pet farm like the overworld warfronts, that only serves to put people on auto-pilot and try and find the most efficient way to complete that content.

As an end note bring back mage tower. Sure I would love to get a chance at the 5 healer skins I couldn’t complete (forever 31/36). But more importantly I loved the MT because even when I did it at 925-935 on alts, it provided a structured environment on how the devs wanted me to play my spec. And in my mind that was an excellent learning tool more so than the times I was forced to do silver proving grounds in WoD. If you bring it back but as a capstone solo tutorial program (same difficulty), I would love to do those again. Sure the challenges would have to be different cause of spec changes from no baked in artifact abilities or traits but I’m sure that the challenges could be tuned to accommodate that. Also add in a hard mode (Rage Tower), that is only feasible for mythic raiders. That would get me going to get back into raiding and not be apathetic about spending my time in mythic because heroic can provide more rewards in less the time.

Thank you for your time if you managed to read all of this. I love wow but I can’t help but question some of the decisions that have happened in the past year and longer about the game.

Consolidating portals in SW/Org is good, removing old portals in Northerend and Broken Isles Dalaran, Shattrath, and Vale Shrines further kills the world of Azeroth, especially when your timewalking hubs are in some of these major locations. Please reconsider this move and take into account all the negative feedback here and pass it along to the dev team.

I think it’s also fun as a long-time player using my head to think about portal paths with my accumulated experience when trying to get from one place to another before I resort to boat access.

And disrespectful and uncalled for. Just because the Blizzard CM is resorting to condescension and sarcasm, doesn’t me we should…

I don’t think WoW players know any other way to talk other than sarcastic and condescending.

This how it should be done:

Ever single main hub, Dalaran, shatt, sw. .Org ect should have one single portal/door that leads to one centralized shared portal room with portals to all hubs in all exspansions.

I understand that changes can throw people off a bit at first, but I also think they help keep the office of Blizzard feeling alive. When there are fewer people, does the office feel a bit bigger to you? Do you like that? How difficult is it to get to the breakroom you mentioned without 5 conversations along the way (talking to everybody who isn’t the supervisor here

Basically what they are doing is making people spend more time moving around the world, increasing time played which increases the numbers in their metrics. That is it. Has nothing to do with players and the world. This is a business.

I’m not sure what the right amount of portals are. I remember the sense of exploration and adventure from classic/vanilla when some zones are “remote” and some are “near” to major portal or travel locations. But that game was a long time ago.

To be honest, I think in general you guys should not be using portals as much as you do. Rather, factions should have major outposts or cities connected by zepplins and boats. The fact that I don’t take a ship to and from Kul Tiras feels pretty lame from a fantasy perspective. But again, I’m not sure WoW as a “fantasy adventure” game exists any more. I feel like this also ties into the recent controversies surrounding flying.

I suppose my only advice is that Blizzard needs to grow a stiffer spine about it’s design direction. If you are going for a feeling of a large world of adventure to be explored, you should be removing as many portals as you can and connect major outposts of the world with more “adventurous” forms of transportation. If you are trying to facilitate WoW as more a theme parky action RPG (and honestly, there’s nothing wrong with that) then you should just keep every portal and put them all in the portal room so WoW players can get out to the “scenario” they are looking to experience.

My main point is that the designers seem to be trying to have both at once, and it feels half baked in both directions. Pick one and commit.

How about a compromise.

So, instead of a few portals you have essentially a million portals (just on a 15m timer)? Never really have to travel anywhere. That’s super convenient, but I feel pretty strongly super unhealthy for the game. Not sure that counts as a “compromise” at any rate. Sounds pretty broken to me.

A list for you, from Wowhead, of the portals being removed from Legion Dalaran:
Dalaran (Legion) 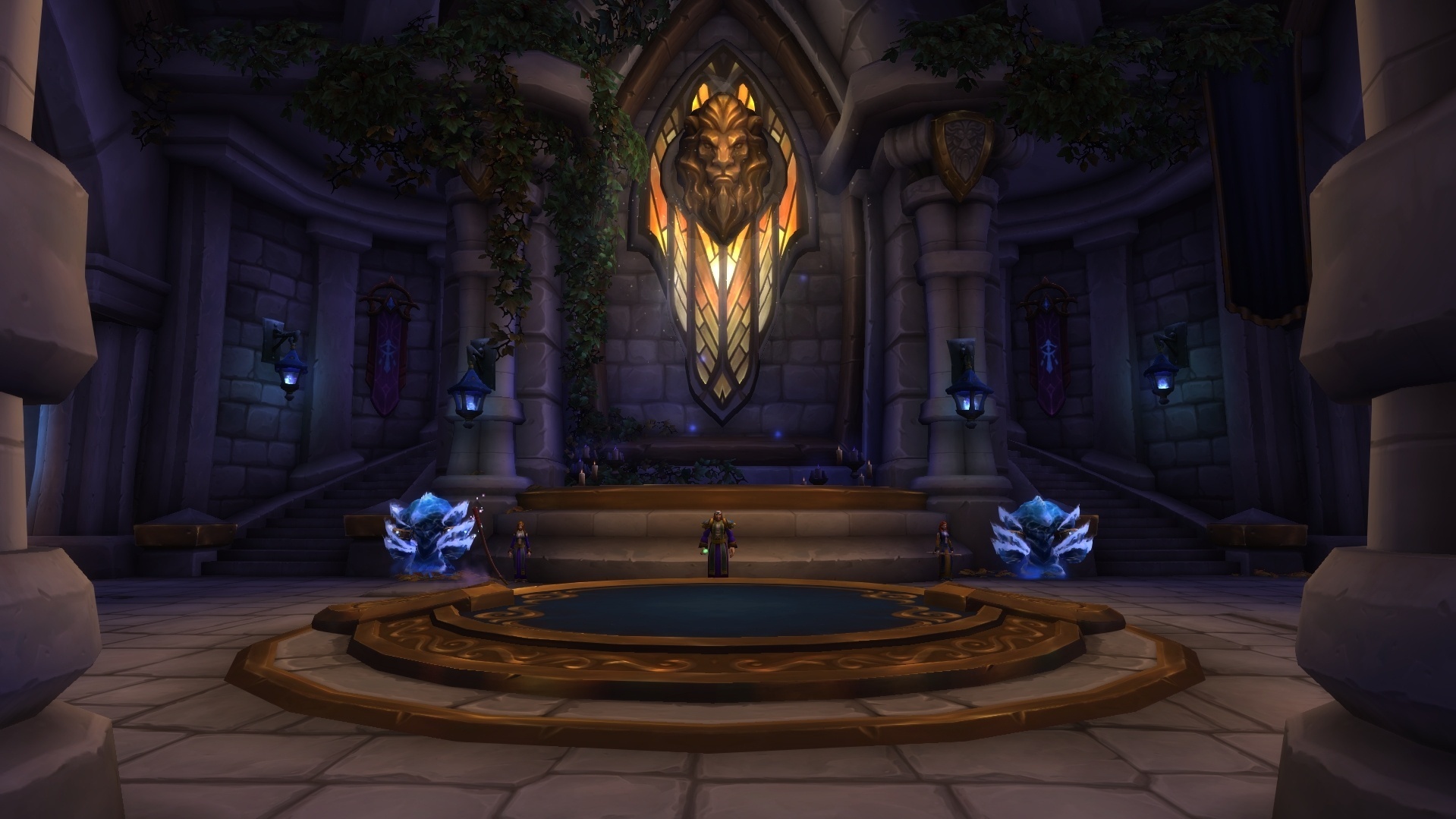 Many of these will not be added to the new portal room.

In addition, what about the legion artifact quests?

I didn’t get a chance to verify it, but the plan was for the portals to show if you are on these quests.

For the part that was brought up about things like Ironforge being removed from the BfA portal rooms, I don’t think that’s intentional and should be changed in future build.

Such immersion. Such big.

if you have to ask can you benefit from the answer?

You’re enjoying the game wrong. You need to do more things that Blizzard tells you are fun, in the way they have determined to be optimally efficient. God forbid you choose the wrong fun activity and miss out on the better fun.

Fantastic, so I’ll just not complete those quests on my alts for the teleport.

If your asking this, you should already know by now that it, by all means, will not add anything but frustration to game play.