Greetings combatants! Thank you to everyone who has been active in participating and providing feedback on Rated Solo Shuffle throughout the Dragonflight Beta. Going into Dragonflight and Season 1, we want to consolidate and provide information about this game mode, for clarity and to address some of the questions we’ve seen on the forums and social media.

What is Rated Solo Shuffle?

Rated Solo Shuffle is the rated version of the Solo Shuffle Brawl that was introduced in Eternity’s End. Introducing the game mode playable as a Brawl first allowed us to gather valuable data and information to improve and refine the game mode before attaching a rating to it.

The Solo Shuffle Brawl will be rotated out of the unrated tab and put into the normal brawl rotation. You will be able to queue up for Rated Solo Shuffle in the Rated PvP tab in the Group Finder UI. To queue up, you’ll need to meet a minimum required PvP item level, similar to queueing up for Heroic Dungeons. 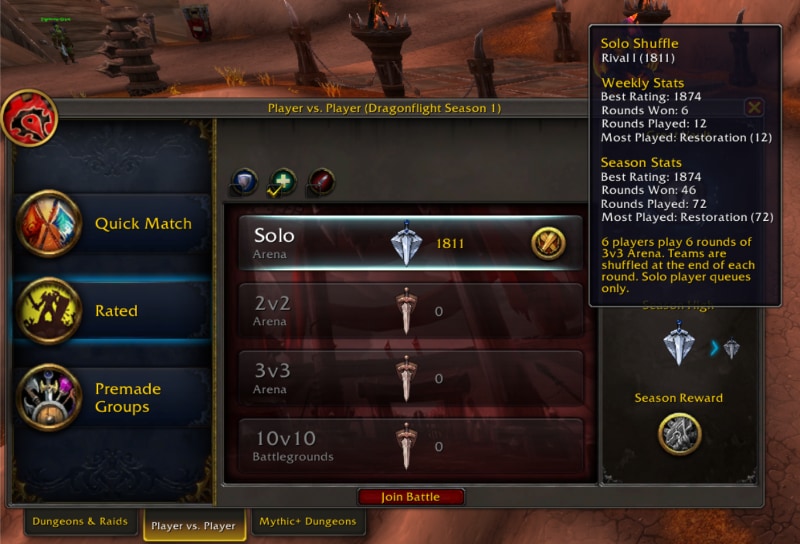 Additionally, cross-faction is enabled for Rated Solo Shuffle, so Horde and Alliance can match together and play against each other.

Will rating be based on Class specializations?

Yes! Observing data from the Solo Shuffle brawl, rated arena matches, and reading community feedback, we felt it was important to have a player’s rating be tied to a specialization rather than class for this game mode. Unique to this Rated game mode, players will have a rating tracked for each of their character’s specializations.

Players will select which of their specializations to queue with, and participate in specialization-based ladders and end of season rewards. This will allow players to try new class specializations in arena without the pressure of performing as well as they would on their main specialization (e.g. a Discipline Priest wanting to try Shadow).

Also coming in Season 1, players will be able to see where they rank against others of their specialization in Solo Shuffle on the official World of Warcraft website.

What Rewards can I earn?

Just like in Rated Battlegrounds and Arenas, you’ll earn seasonal rewards and achievements, credit towards Vicious mounts, weekly great vault progress, and Conquest with rewards being based on the highest rating amongst all of a player’s specializations. Players will earn all seasonal titles and achievements that they would normally in Rated Arenas, with the exception of Gladiator and its associated reward. We felt it was important to keep it as a unique reward to Rated Arenas.

We recognize that some class specializations may perform better than others in Solo Shuffle, as well as having different total representation within the game mode. Because of this, we’re introducing a new and unique end-of-season title for the top 0.1% of each specialization in Solo Shuffle. For Dragonflight Season 1, this will be Crimson Soloist. We’ve seen community feedback around the title and are evaluating it.

How is rating calculated for each match?

During the Dragonflight Beta, we received feedback on wanting to better understand how rating is calculated. There’s a lot of math and calculation that goes on in the back end, but effectively the Solo Shuffle match is calculating 6 matches of arena into one.

When a player enters a match, we determine the expected performance of players in the match based on player matchmaking rating (MMR). We take all the rounds into account, considering who was on each side and who won, so it matters which specific rounds the player wins, and not just the total number of rounds won, in calculating impact on MMR.

We are discussing ways to improve the transparency of how ratings-change calculations can occur. Compared to the live game, Beta realms have a relatively low population, and consequently a much wider spread of ratings and matchmaking values in each match. We expect matches on live realms to include players with ratings and matchmaking values that are closer together.

What happens if another player in my game leaves before it ends?

A topic we’ve discussed internally and seen feedback on with the Brawl and on Beta is: what happens if a player leaves the match before all the rounds end? We want to disincentivize players from leaving their match, punish them appropriately, and have minimal impact on players who did not leave. The leaver will receive a Deserter debuff that will increase in penalty for each consecutive offense.

Please continue to share your thoughts with us here in our forums or @WarcraftDevs on Twitter. We will schedule a ‘Play with the Blues’ event in the next few weeks, focusing on Solo Shuffle and general PvP on Beta, so keep an eye out for that. Until then, enjoy the Dragonflight pre-patch, and we’ll see you in the arena!

How does solo shuffle work towards getting the Vicious mounts? Does each individual round win in a match contribute or like only the highest player at the end of all 6 rounds get credit towards the mount?

very excited for this

The leaver needs to lose rating. People on the beta are leaving every single time they are losing to save their rating. Numerous matches where I as the healer are 5-0 and the opposing healer has 0 wins and they just leave. All they get is a 1 min deserter and I lose out on potentially 100+ rating…The last 5 matches I’ve been in someone has left. I can’t gain rating with this happening.

The current iteration on beta will ruin the solo shuffle experience. Guaranteed.

atm in the beta leavers just do it to troll or avoid losing rating. there needs to be a account wide penalty for repeat offenders because people will abuse this

The leaver will receive a Deserter debuff that will increase in penalty for each consecutive offense.

Increased point loss for leaving early as well thanks.

Leavers need to lose rating. Currently they are not! This is an obvious loop hole…

Why kill this dead before it even launches? No reason not to be able to get glad mounts especially since this is content that won’t be boostable outside piloting.

With gladiator / gladiator mounts not being a part of soloq it will severely diminish its value, you go from a vicious mount that absolutely nobody cares about to the .1% title, this will hinder the amount of people who actually play this mode by quite a large margin and you should be able to get the regular glad mount from it, gladiator in 3s is not prestigious and the LFG system is awful, this is why we wanted soloq in the first place, this would allow soloque its own room to breathe, this decision will snuff it out before it even lives

solo que is litterally 3s, with no comms and fast dampening. It is a 3v3 format.

Players will earn all seasonal titles and achievements that they would normally in Rated Arenas, with the exception of Gladiator and its associated reward. We felt it was important to keep it as a unique reward to Rated Arenas.

If not glad title/mount, can we get something that’s equivalent? Give us something to work towards between duelist and rank 1.

We want to disincentivize players from leaving their match, punish them appropriately

OK that sounds about right

The leaver will receive a Deserter debuff

NOPEE that is not it, for the leaver every single match should count as losed = 6 arena matches losed in a row (no one cares if they get deserter debuff or not), for all the other players won matches should count as won matches because they were won matches … basic logic no? and the remaining ones should not count not as won nor lose … that’s it … is so basic you can’t argue with that

ofc we all know the reason is not gonna work that way is just because it was not coded initially that way and you do not wanna change it, but please fix it, this is way bigger than you can ever imagine for the game, soloQ is gonna change the game forever, but you have to do it right

The leaver will receive a Deserter debuff

This will still not be enough. They need to lose all their rating as in if they lost all 6 rounds. people will not care as long as they keep their rating

The deserter debuff needs to account wide or they will just swap to another character. The deserter should start at 1 hour and keep ramping up from there the more often they keep doing it within a timeframe blizzard sets