Over the past couple of months, we have been hard at work preparing our combined league structure and are excited to bring Storm League’s Preseason to the Nexus in the next major patch! We will go into more detail about that in the near future, but in the meantime, in our most recent Reddit AMA, we got some questions about the 2019 Gameplay Updates and wanted to share some insight into our thinking behind them. We’d like to discuss our goals and share some data to show what has been happening since we rolled out these changes.

There was a recent post on www.Heroeshearth.com that went through some in-depth analysis of Hotslogs data and plugged it into some machine learning algorithms. The author, Ghostdunk, did an incredible job putting together the data and graphs in an easy to read format - we highly recommend you take a look at it! While Ghostdunk was working with data from Hotslogs, we’ve got the benefit of having access to much more data and wanted to share some additional context. While end-of-game level differences is a useful datapoint, it does not tell the story of everything else that led up to that point; addressing or changing that wasn’t a focus for our 2019 Gameplay Updates. That said, we have been analyzing the data from the last couple patches compared to the past and are excited to share some of that information with you!

Our high-level goal for the 2019 Gameplay Updates was to make matches more competitive, especially in the early-to-mid game. To do this we were expecting the following outcomes:

We spent months working on different designs and number changes to accomplish that goal, and each iteration pulled us closer to the major culprit – burst experience advantages in taking early game structures. Teams that won the first objective would often focus on getting front walls of each town down before ever attempting a Town. At these early levels of the game, there was so much experience in these structures that teams that won the first major objective were often able to put the losing team into a massive disadvantage as they gained a two to three level lead heading into Heroics. At this point, the team with the level advantage could control the map and force uneven fights on future events, effectively putting the enemy team into a chokehold that too often limited choices for the lagging team and often dictated the outcome of the map.

The MOBA genre revolves around these types of power advantages, but in ours, it felt doubly bad to be down since it wasn’t a single Hero or two on a team taking over, but the whole enemy team having both statistical and talent-tier advantages. As most players know, it is extremely difficult to team fight in our game unless you are at least on the same talent-tier as your opponent. This greatly limits the options for the team that is behind. We figured we could combat this disadvantage by taking some of the raw statistical advantages away from teams that were winning early, and give them an instant strategic advantage, plus a long-term experience investment. This led us to our final changes:

Stas, our wonderful technical director has been crunching our data in order to see if our goals were being met or if we fell short, and here is the high-level bulleted findings and some graphs to help players interpret them. 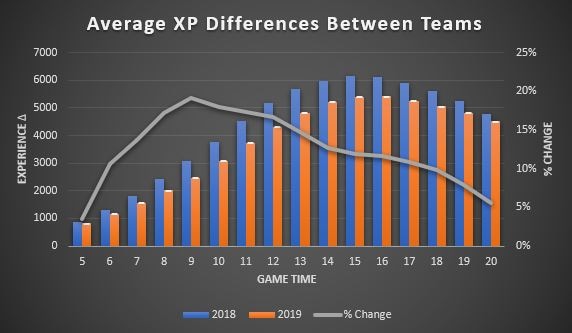 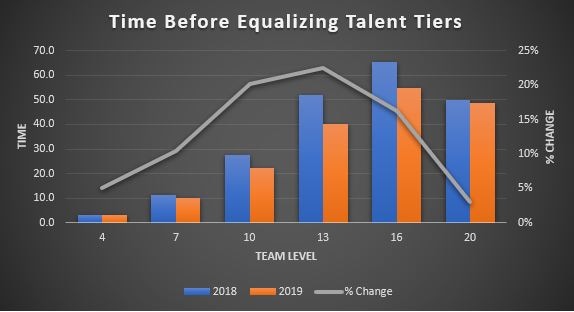 Overall, the most important thing to take away from all of this, is that even when losing, the game should still feel close. You can still compete, fight the enemy team, and not be at too great of a statistical disadvantage. If the enemy team still beats you, it’s because they’re actually the better team, and not because early game mistakes lead to unsurmountable level advantages that don’t feel fun to play against.

69 Likes
News flash for anyone still around
Catapult change was bad... like pretty much every other change
Nearly every game is one-sided now
Exp globes were a bad idea, please take them away
Something Nice about Exp Globes
You're not going to compete with Lol, stop
I'd like to see some statistics
Syrnis-2802 22 March 2019 20:34 #2

Thank you for all the information!

Thank you dev for reporting these things with us.

Another thanks for posting it HERE

I’ll be interested to see how this plays out.

See you guys in the next blue post 3 months from now.

This is not help and “snowbolling” still here. And personally i do not like the last changes of getting an expirience by players and the deleting an ammo of towers.

From actually playing the game it feels like snowballing actually got worse after the changes though.

Cool post, thx!
I do see less snowballing since the changes indeed and it is harder to keep up lvl advantages.
Keep up the good work!

All of the major dev updates to gameplay including post 2.0 bruiser/siege rework, stealth rework, removal of ammo, anti snowballing and now the ranked merge and reclassification have been on point, along w the balance patches this year and last.

Keep it up! hots just keeps getting better and better

Good change overall. But could you share stats on match lenght pls? It feels that it went up a bit.

Good info. Thanks for posting on your own forums!

People tend to get upset when information goes over their head, but I love posts like these.

Big part of all the recent changes was solo laning. Any plans regarding this part of the gameplay?

Like, increasing minion damage modifier against other minions to make laning even more important, while at the same time making it less about hitting minions and more about brawling? ChaosOS for example talked quite a lot about mercenaries, among many decreasing respawn timers.

The general idea is to give players more of “something to do” during solo laning. I hope you realize that laning is still kind of a problem.

(great post, lowering tower xp was one of the best changes you ever made!)

Cool. If they put half the effort for this towards a functional matchmaker, then I’ll be impressed.

and for me was so interesing to be info myself…
after this passive earning xp patch, in HL in Bronze league win rate is almost equal 50%.
this not good dear Blizzard developers…need in future a way new Match Macking type versione.
With almost equal 50% win rate,we cant climb up! I did test to now this MM or MMR ELO system for almost 4 years with over 2280 Ranked games,and i cant climp up even through 5 Bronze devisions!.
Until someone (silly clown) pop up and reply to me like that …"you deserve your league or your game skill is so bad ".I can proof my game skill with my hotslog achieve % MVP and my % KDA ratio!.
Search me in hotslog my profile “Brutalnot” .
(these replay are old and low % attached!!!)
And if game was with different versione MMR or MM to now,then i would be in high leagues! But im not,because this MM or MMR is not so well tuning!.

in my post “Brutalnot” (this is my alt account)…i did suggested many ideas… here:

So… WHOLE BLIZZARD FANS…DESERVE…THE GAME BE MOST EPIC GAME EVER MADE IN GAMEIBG HISTORY AND THIS GENRE! “SMASH WHOLE COMPETITIONE”! “WHO WANT THAT?!”… “I CANT HEAR YOU”… “I WANT SHOUT LOAD”…

I would gave you many and a lot improved and smart different ideas,mechanics,rules,new modes,new quests… 1st:… New Match Macking stric requiment mechanics: Players would not be matched by devisions ,only by Rank ( Bronze,Silver,Gold,Diamond,Platium,Mater,Grand Mater) like this current vers…

search my last reply where i did suggest 2 new ideas…

We know you need from so long time to improve the game very well.That why i try to out so many times ,even i adversiting my ideas in EU server in general chat ,because i want to collect many peoples thoughts or point of viewes and to pin my ideas in your future work!
I can guarantee you in theory my game version would be a lot better and improved! Even in PTR test few months!

search my last reply where i did suggest 2 new ideas…

which are completely unintelligible. I honestly have no idea what you’re trying to say.

Also the post was a necro, and technically qualifies as a “bump” especially given you are hte only person responding to your thread

these actions are against the Posting Guidelines.

As a GM and just below High level Offlaner Reading this…

This is a very bad response.

Every game feels so damn same-y. What attracted me to Heroes and kept me playing Heroes from when I was Bronze to GM was how different every game felt.

Different heroes effected the minutia of the game. You could have so many different and coherent strategies, and even with the same 2 teams of 5 heroes on the same map, every game could be different, even with just a say quarter level difference.

Now there’s only 3 kinds of games: early stomps, mid stomps, late game games. As a result, this game is more linear than ever, and it’s been getting worse since the Turret changes. But this XP change put the game over the edge. And that lead to Masters+ HL being absolutely awful to where it is flat D E A D in NA.

It’s so dead I meme’d around never getting GM and I got GM… while I was decaying.

I might do it again after playing a game to stop my decay in which I lost.

Instead of fixing the problem, the XP changes make optimal play about AFK. The more I AFK and hard PvE, the more I am winning. This game is fundamentally broken in how you are forced to engage.

It’s so bad no one at my MMR range really enjoys solo queue anymore (again, why HL is DEAD in NA and basically every minor region).

The only way to enjoy the game is in a group or (especially) in coordinated play. Otherwise, if you know how to play the game with a brain, you might as well not play, because the game quality is dreadful.