Here, I present data and its analysis for the final era 11 solo leaderboards (patch 2.6.6) as well as the current era 12 data (patch 2.6.7a/b). Era data is non-season and is used to exclude confounders caused by seasonal buffs.

The datasets being analyzed are imperfect in that there are biases in the number of players pushing each class. As an example, demon hunters and witch doctors did not receive any buffs or nerfs in patch 2.6.7; however, it is much easier (i.e. lower GR clears are needed to get onto their respective leaderboards). At the highest ranks of each leaderboard, the era 11 and era 12 data for these 2 classes is similar but as one goes further down, a gap broadens in each leaderboard where era 11 was more competitive than era 12. 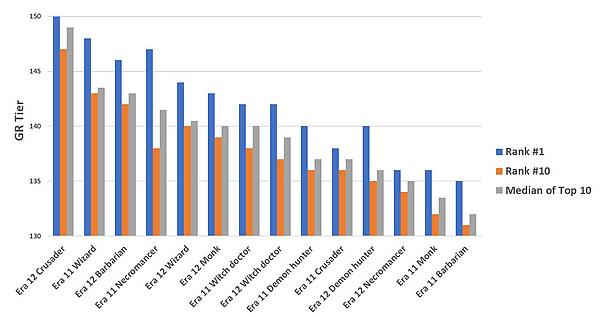 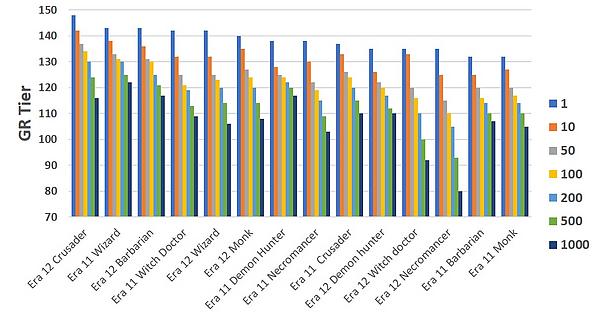 Note: Data for Rank #1500 and #2000 were only available for era 11 and not era 12 through Blizzard’s API. This data is affected by the number of players for each class as illustrated by comparing era 11 and 12 demon hunters and witchdoctors that were not buffed/nerfed in patch 2.6.7.

This is a modification of the method initially used by Prokahn (see reddit https://www.reddit.com/r/Diablo/comments/cv6bcx/analysis_era_11_barbarian_grift_clearing/ and links therein and several of his posts on this forum). Briefly for my analysis, GR efficiency was defined as P=(A1,000,000,000)/(BC) where A = GR tier, B=GR clear time in milliseconds, and C=player’s paragon level at time of clear. Blizzard’s API reports clear time in milliseconds where 15 minutes = 840,000 milliseconds. This method corrects in part (but not entirely) for discrepancies in the number of players pushing each class (see Graph D). For simplicity in the graphs presented below for every greater rift tier, a single data point is used to represent the average “GR efficiency” for all players at that specific GR level. * denotes that the lowest GR clear for each class is not graphed as the data is “incomplete”, since it spans the leaderboard cutoff. Multiple graphs are shown: 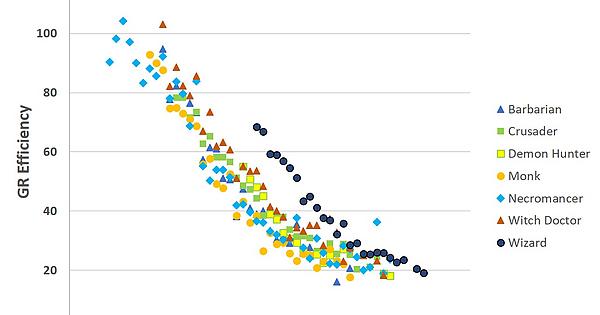 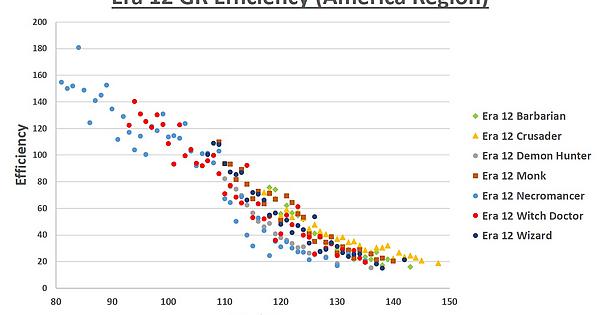 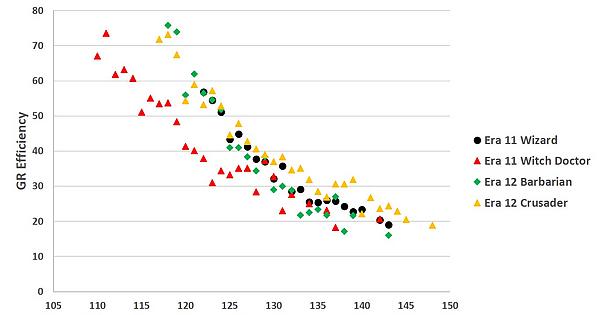 Balance is an ongoing process where underperforming and overperforming classes remain. In era 12, crusaders are clearly overperforming. Necromancers need buffs. Barbarians appear to be overperforming, especially in light of Matthew Cederquist balance comments. It will be interesting to see Blizzard’s upcoming blog post on game balance and future changes in store as they improve balance between classes for their respective top builds.

What a waste of energy and time.

What a waste of energy and time.

I think from the point I decided to do this, I spent a few hours on getting the data summaries and graphics while concurrently watching TV. Once you know how to get the data and use excel, it is fairly simple copy and pasting. Even the formatting (e.g., making clickable table of contents and clickable back to table of contents) was relatively straightforward and easy to do using a template that Morgan provided. With more knowledge and handson experience, the quicker a seemingly complex task can be accomplished.

Data-driven posts and analytics are definitely not everyone’s cup of tea. Personally, I think comparisons of era 12 classes to era 11 wizards is interesting considering the new nerf/buff cycle.

Given Matthew Cederquists comments on game balance, the data potentially has implications for crusaders, barbarians, and necromancers in particular.

Next time you make such a claim, make it with your evidence so we can analyse it

There is nothing to compare between era 11 and 12 wizards, the macros are almost identical and for top leaderboard push bazooka was and still is better than vyrs. At least vyrs was nerfed so you will see a difference for top 1-2000 but outside of that it boils down to how much the r1 pushed.

For necro it is interesting tho.

This means Barb is probably getting nerf next patch.

Barb did 142 in non season in 12 mins General Discussion

Definitely not fantastic design and balance. This one particular Crusader at 10,176 Paragon is about +5 GRs above our expected. Something to look into for next patch!

This was a blue post commenting on Crusader doing solo GR 146 on EU non-seasonal.

Do you have a screenshot of the current China or worldwide top 10 for barbarians?

I don’t understand why you would use any data source other than Blizzard’s API.

Is there a work around? I get an error message when trying to download the China data.

Exactly. That is why you should not use it.

Put your access_token at the end and you have it.

Thanks for the link. It did work with my access token. I will update my post in a few minutes.

Clearly, barb is in gray. Without hard cast, it may still under perform a little bit. Only few players can properly use hard cast right now.

Bliz and players still need some time to see the true power of zodiac rend. The data of barb era 12 is pretty close to WD era 11. Frequently changes the numbers of certain build is not a reasonable choice. This is also why gray zone was introduced by Matt.

Currently, the only issue is crusader in NS. Fix that issue, buff DH Nec and fix bazooka, buff other wiz builds(channeling builds, etc). In my opanion, that’s is what they should do next season.

I differ with certain elements of your interpretation.

Bliz and players still need some time to see the true power of zodiac rend. The data of barb era 12 is pretty close to WD era 11.

Clearly, barb is in gray.

With additional time, the top GR clears will only increase. It will be interesting to see what Blizzard’s blog post says. At the top end of the leaderboard, the top barb clear is +5 GRs over the target of 141. Within 1-2 GRs is considered good balance. The gray is 3-4 GRs. 5 GRs or more is most likely “correction” zone. Matt has made a couple posts already about this.

Barb did 142 in non season in 12 mins General Discussion

Definitely not fantastic design and balance. This one particular Crusader at 10,176 Paragon is about +5 GRs above our expected. Something to look into for next patch!

This post by the game producer Matthew Cedarquist gives some insights on their ideas on balance. As previously stated, a blog post will be coming in the future. I wanted to increase his post’s visibility as it is post 368 in another thread.

The data is much closer to wizards of era 11 than witch doctors. Double check the median of the top 10 worldwide GR clears and GR efficiency (overall and at specific GR levels for example GR 125 and GR 120). You can also look at GR tiers as a function of leaderboard ranks. For example, rank #100 era 11 wizard cleared GR 131 while currently barbarians are at GR 130 and this era is a couple of months old.

Matt has made a couple posts already about this.

Top 1000 barb players may have higher avg paragon than WD. That’s why Prokhan’s analysis is more reliable than yours. Try his method.

Prokahn’s method was used in section 4 that discusses “Greater Rift Efficiency”. This method takes into account paragon levels. You may want to look carefully at the graphs and the table. The conclusions between the different metrics are largely consistent.

Here is the graph again 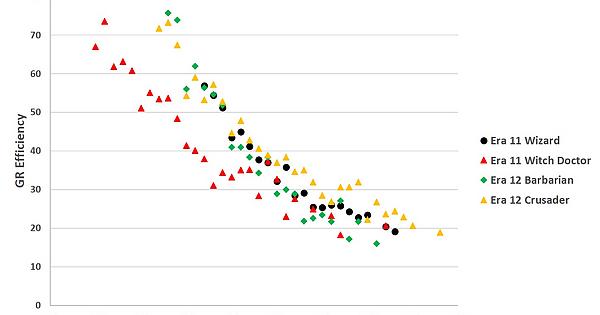 the different metrics are largely consistent

You already get the api. Is there any techinical issue for you try Prakhan’s method?

Prokhan method was used in section 4 of the original post. I have already posted the results in the first post in this thread.

This is a modification of the method initially used by Prokahn (see reddit https://www.reddit.com/r/Diablo/comments/cv6bcx/analysis_era_11_barbarian_grift_clearing/ and links therein and several of his posts on this forum). Briefly for my analysis, GR efficiency was defined as P=(A 1,000,000,000)/(B C) where A = GR tier, B=GR clear time in milliseconds, and C=player’s paragon level at time of clear.

If this greater eff is Prokhan’s method.

The green and red are close. Wiz is higher. right?

Let me walk you through section 4. There are 3 graphs.

while the 3 other classes are more overlapping

Thanks for the explanation. Here is my suggestion.

In my opinion, people use a curve (e^ - x like functions) to approximate the data. Before we say two curves are close enough, first we have to focus on an interval on the horizontal axis. In your data, we should focus on the right half of the interval (Cuz we all care more about 130+ clears not 110 clears), then calculate the area between the two curves.

My personal conclusion is:

In your data, we should focus on the right half of the interval (Cuz we all care more about 130+ clears

I do not know that it is fair to claim that “we all care more about 130+ clears”.

If you want to only consider 130+ GR clears, than it makes sense to look at the worldwide

Pick up data of 130+ clears. Still compare the eff curve. Not the mean/median. As I said before.

For ease, I took the worldwide data from the zero empathy leaderboard.

The area under the curve for GR clears 134 and above for era 11 witch doctors is 186.8 while for era 12 barbarians is 267.0. As you mentioned their difference in GR efficiency becomes even more pronounced at lower GR levels where barbarians are more efficient.