EDIT: It’s been a while since the bug associated with this was fixed so I’m taking down the test map.

For those having trouble with the “Expert Phase-Smith, Perfect Templar” anniversary achievement, I’ve made a test map that may help indicate why the achievement isn’t awarded for you. Hopefully it will reveal what you’re missing as you play through the mission so that you can correct it when playing the real mission.

The test map is identical to the real mission except for notifications that will display in real time when anything of the player’s dies during the mission. If the message appears, it means you wouldn’t have earned the achievement if you had been playing the real mission.

If nothing of yours dies during the mission (no pop up messages), there will be a message that will appear at the end of the mission if the achievement would have been awarded. (Nothing will appear if not.) NOTE: This appears after the end-game cinematic.

Some things that are confirmed:

The test map:
----
Instructions for opening the test map in the editor (and changing the SoA abilities if you want):
----

I have tried the “Expert Phase-Smith, Perfect Templar Troubles” achievement many times now with Void Rays and with Carriers and it still does not work? Read all your post and have changed tactics and avoided ALL the pitfalls and problems people have had in the past. Still no luck. There are a couple of other achievements in the Trilogy not working for me as well. GRRRRR… I was going to try your “TEST MAP” but am not sure if it is still available. Do not believe all the bugs are fixed yet? Any help or advice would be greatly appreciated.

I’ll put the test map back up. You can download it here. If you get hit with a Dropbox login, just cancel it.

The one thing I that pops into mind is even though the achievement says not to lose any units, losing a structure will also fail the achievement. That includes cancelling a building while it is warping in.

Thank you very much Leviathan,

I did read ALL the forum posts, including cancelling buildings etc and still no luck. Watched all the successful YouTube’s as well. Really appreciate the " Test Map " will give it a try tonight if I am able. Looking forward to it.

In case you already downloaded a copy of the test map, scrap it.

I grabbed a fresh copy from the campaign so that the test will reflect the most current version of the mission. I replaced the link above with the latest version.

EDIT: Just to make sure that everything is still working in the latest version, I checked to see if any of the old issues remained:

… and none of them failed the achievement.

Doing all those things above, at the end I was able to get it: 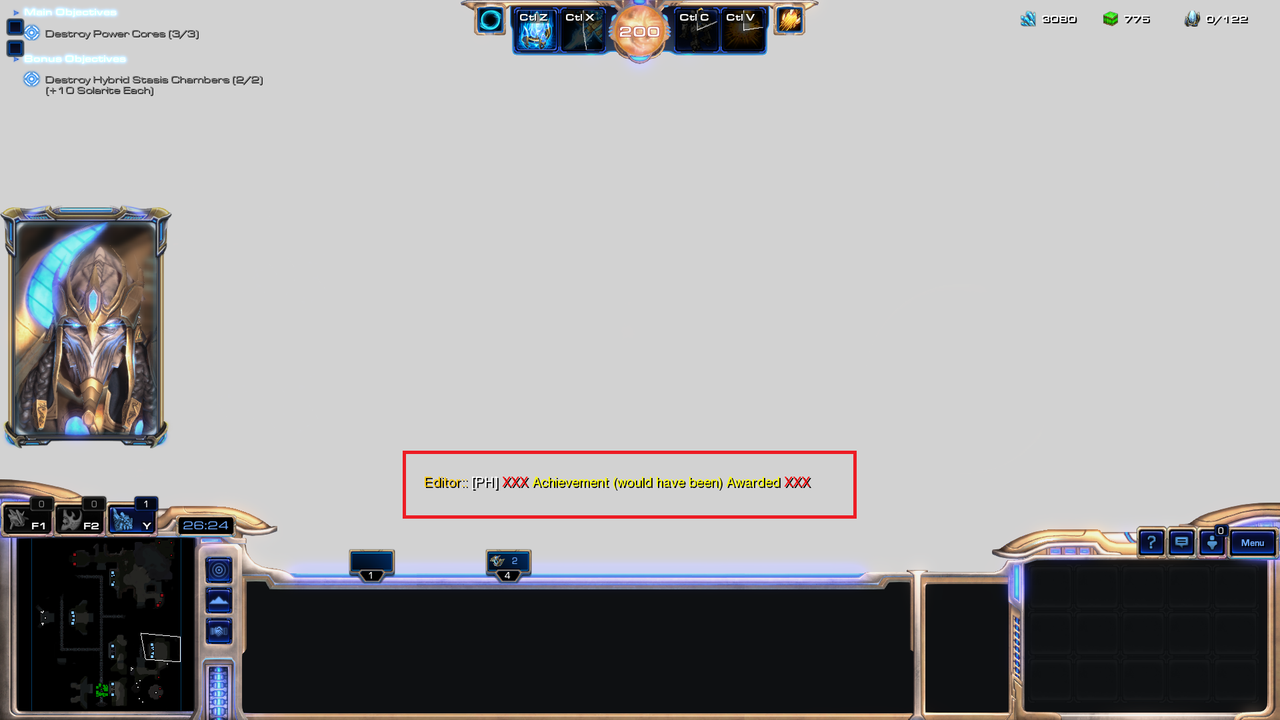 I finally succeeded in this achievement due mainly to your marvelous test map. It immediately came up with any losses which made me re-evaluate my entire mission strategy. One little object destroyed and you fail. They are hard to see during the actual mission.

It really is possible to complete

The map made all the difference, thank you very much indeed. Not sure if ALL the bugs are gone but if you tried it they must work now.

Would it be possible to ask about another Buggy Achievement? I have completed the Primal Power “Death From Above” multiple times using Air and using Land forces and never received the award. Using Master Archives and with you help all the others are now up to date. I am new to this forum and not sure how to ask these questions. Sorry…

BtW, I used the original Map you suggested and except for a couple error messages loading at the start it worked fine.

Once again, thank you very much Leviathan, you gave me the confidence to complete this task successfully.

Would it be possible to ask about another Buggy Achievement? I have completed the Primal Power “Death From Above” multiple times using Air and using Land forces and never received the award.

Yeah so that one is bit weird. The achievement trigger has a strange condition in it that isn’t present in any of the other achievements.

What difficulty are you trying it on?

So far I have only tried it on “Normal” to get all the 10th achievements. I usually go back and try Hard and Brutal later for the Mastery and more advanced achievements.

I have completed it several times by Air with Mutilisks and by Land with Brutilisks and always well under the allotted time. Should I try it on Hard or Brutal with one of these methods? I will attempt in whatever way you suggest.

It is the only HOTS 10th achievement left. I am just completing the LOTV ones now, thanks to your help.

Sorry I missed your message but it was a “Wife Day” and was not near my computer.

I tested the difficulties out and they are all working correctly (Normal, Hard and Brutal will give the achievement). So forget about me asking what difficulty you were doing.

I gave it a try and when I destroyed the 3rd Power Link at ~16min, I got the achievement.

I destroyed the 3rd power link between 16 and 17 minutes several times and ended the mission but NO achievement.

How can you finish the mission in under 18 minutes without destroying the 3rd power link. Isn’t that always how the mission ends?

Maybe I am not understanding something.

The objective is to destroy the Psi Destroyer (the big thing at the back of the Dominion base). The Power Links are the three smaller structures that Dehaka kills.

On a side note, you actually can finish the mission before all three Power Links are destroyed. (It’s the Mastery achievement for the mission.)

You may very well be correct Leviathan, I could have simply been extremely foolish and destroyed the wrong thing so I will go back and carefully try again. Am currently trying the Salvation achievement but will go to the MA after and try the HOTS mission again.

No worries! Let me know how it goes!

Will do, and thanks again.

Couldn’t concentrate on LOTV with one mission incomplete in HOTS. Went to the Master Archive and you were completely right again. Destroy the correct link and you get all the achievements. HOTS is now complete and so am I, chagrined that is.

You are the best, having no one to play with or ask it can sometimes be very time consuming and a little frustrating but it is the best RTS game I have ever played.

Thank you. Humbly yours,

Congrats for those that made it.
Sadly, a test map is useless to me, because I would probably get a probe or a structure killed, or an accidental cancel, and it’s not like seeing those happen in a test map would prevent me to reproducing the mistake in the real thing

I hope the map will get fixed eventually and/or have the objective made more specific.

Anybody masochist tried to win by including the summon of the Tauren Marine?

The test map made all the difference for me! I showed where a pylon and an assimilator were destroyed and once a battery I never noticed before. It allowed me to watch for these weak spots in my defense and I won the achievement on the very first play through after using the map. I did save as I went.

Thanks again to Leviathan for all the help, was really great.