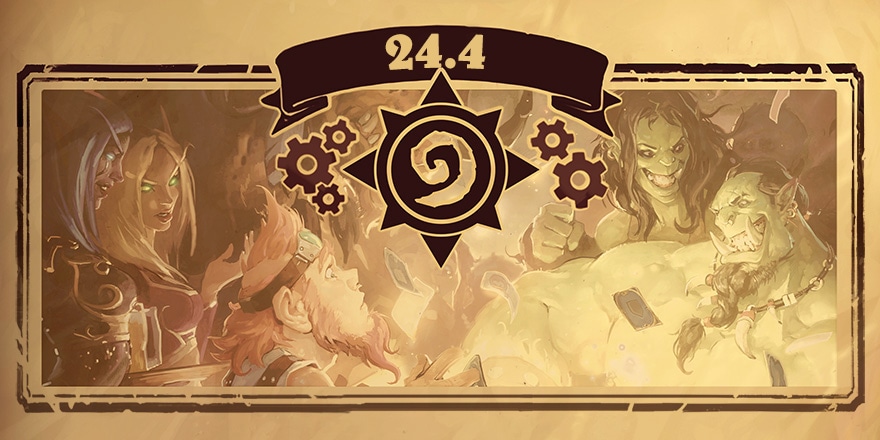 Patch 24.4 Brings the new Mini-Set, Maw and Disorder to the Tavern, as well as a returning Battlegrounds Hero, Mercenaries changes, and more!

Opportunity knocks and they forget how to open a door.

Very interesting feature related with the bots system, but also, very fascinating the fact they reworked Sylvanas. To be honest, she was pretty bad the last time I’ve seen her on Battlegrounds, but after I read her new hero power, I do feel like she might be picked up by a lot of high & low MMR players.

I really love mercenaries, and I just want to put this out there. Since I’ve seen you bring such crazy characters like the old gods into the mode, I think it would be really awesome to see all 5 versions of galakrond as unique mercs put in too. It’s a perfect little group to release, and he could have a rule that only 1 type of galakrond can be put into a party at a time.

Would like to see them fix Sire, Theo and Prince.

Nope. That’s coming in Patch 24.6, a couple of months down the road.

why on earth is bwomsandi a fighter and korak a caster??

No fix for Reno the Relicologist? Its been crashing the game for almost a month.

It affects Wild, Adventures, anything using that effect.

So, instead of banning the bots, they add their own bots, and now the low mmr experience farming bots can play against Blizzard bots, and not bother human players? Eye twitch Ha. Haha. Hahahaaaa.

I truly hope that this fixes the solo adventures, considering people haven’t been able to access them for a few months now.

5 versions? It made sense in ladder, where you had 9 classes. But in Mercs? Maybe 3 versions is more suitable?
And i think that it is better to just make 1 galakrond with 3 different equipments that completely change all his abilities, class and give some passive bonus.

Maybe that’s because shadow team lacks fighters?
And maybe korrak is a caster because he’s an anti summon character, and summoners are mostly casters, so he would be too strong being a fighter.

So, about Mercenaries — some thoughts in general and first impressions about some of them in particular below.

First of all, a common theme is a lot of craziness with bench-jumping, role manipulation and all that. Unless it turns out completely impractical with the current implementation, this could change the way the game is played completely, and PvP in particular might become just… totally haphazard (and I’m a bit cautious about that, Maestra already being a very bad asset in that regard). Besides, some of the new abilities have the potential, at least in theory, to just trivialise some bosses (think Malchezaar against caster bosses or Tess stealing something big… Even Medivh could impact things).

Now, about some other mercs or tribes in particular.

Ysera? Yes! Not only is she a cool character as a notorious dragon, which would fit well alongside others of her kind, Yu’lon and Brightwing might be happy to see here for some potential big Nature damage with a bit of synergy between them.

Bwonsamdi? No, no, no! Yet another irritating troll, probably with ridiculous voice lines and overpowered Shadow abilities: that first one — what? 28 damage? That alone is quite… concerning in terms of balance. Or another one — take no damage? Really? Are we literally being trolled here with this merc overall?

Big upgrades for the Fel and Demon tribes, which were a bit awkward and hard to use (that synergy between Rathorian and Mannoroth was just not enough), — we’ll see if they become a thing, especially in PvE.

Medivh as an Arcane protector? Oh, yes, and with some crazy abilities, too. Khadgar looks a bit too slow, but could do some things with that Blizzard, for instance, in a Frost party.

A legendary murloc, and a protector — another one — at that? Yes, please! His abilities look a bit slow, but maybe he could be played for fun with other Murlocs.

There are a few notorious others… Don’t know how I feel about the likes of Korrak or Nemsy (wasn’t she supposed to be a warlock, by the way, instead being more of a Nature gardener… of a sort?), and Genn is definitely a unique one.

Now, to a less pleasant matter. We’re getting 4 legendary mercs, 4 epic ones and 6 rare ones — and no event or free ones, as far as I can see, compared to the previous big drop in 23.4, which contained 3 legendaries that you had to open from packs or craft (plus free Tyrael and those Old Gods who could be obtained through events), 8 epics and 5 rares. So, once again, as noted previously [1] , we see a tendency for increasing the amount of packs required to get all the mercs (legendary ones are the bottleneck here), don’t we? Looks like I might, for instance, blow some of that accumulated gold on packs.

[UPD] Another thing. ‘We are also adding five new Bounties to the Felwood Zone, and 3 more new Bounties to the Blackrock Mountain Zone’. Felwood? Alright, maybe there’ll be an incentive to play with Kurtrus, who shines in the zone on those maps with a lot of demons, again, but as for Blackrock — haven’t we already got quite many bounties there? Well, maybe there’s still space on that last page, and it’s only 3 of them…

I’m guessing PST? I’m EST so this will be a long wait…