I can’t take any credits for the link. Leaf asked me to post this here.

You know that I was sarcastically joking right?

No, I didn’t get it. I don’t know Night Elf culture at all

… But I did my part to deliver the link.

Can we get some boomkin customizations? Lol

I believe they are currently hanging out in Nordrassil, and I hope that’s their new home.

I don’t really agree with that, honestly - Night Elf buildings in Darnassus are (or… were…) just outdated. Night Elves never refrained from their imperial architecture. We have the ruins in Azshara for instance, they’re exactly the same as those in Darnassus. Or even Eldrethalas is very similar to Darnassus. Val’sharah, Azsuna…

In Darnassus there were three buildings with the stonework of their older culture, ignoring the bridges themselves and the few pagodas. Those buildings were the Temple of the Moon, the Warriors terrace and the inner gate to Teldrassil proper.

The entire rest of the city was constructed of their wooden or tree buildings. So yes, they do use that sort of building but its not something they’d use in their entire city favoring the more naturally grown structures for their day to day activities to the Stonework of their old empire.

The Stonework is only used in reference to Elune or for military fortifications.

Night Elves as they are now would be unlikely to build an entire city in that style.

No, no, no, no. I’d personally hunt every Ogre in game if that ever happens. I would sooner do like Sylvanas and raze the whole city to ruins (well… it’s in ruins now, but you get the point lol) than giving it to the Ogres.

Now seriously. I would prefer that Ogres have their own architecture, especially if they ever become playable in the future. It just wouldn’t feel right to play an Ogre in an Elf city. Just my opinion, ofc.

I don’t mean to say it would be the player capital, its just the Gordok Tribe has hold there still allegedly. So its either going to be them or the Saytr but I doubt the Saytr’s abilities to continue to hold such a place.

Horde player Ogres should ideally come from the Stonemaul in Dustwallow Marsh. And I too would want them to use their own architecture.

Regardless I don’t really see any Night Elves having the drive to move their civilization to Feralas and the ruins of an Empire they decry for destroying the world.

Some of the items seem to use the name Kal’dorei idk why not used tbh.

I just wish they’d go through and change that so it matches every other setup for the “race name” of the elves… Quel’dorei, Sin’dorei, Ren’dorei, Shal’dorei, Fal’dorei… Kal’dorei…

Highborne in the Kaldorei Resistance, which joined in the Cata are mentors for the young nightelven magi, PLAYER magi nightelf are not a Highborne to have the “highborne” options.

First off, there isn’t anything stopping you from playing a Shen’dralar, its an entirely player thought up thing that you’re just a recruit bound by game limitation at best. Its no different than playing any other type of character.

Second, even if it were, thats no reason to say someone can’t request to add that customization. Its non-existence before now is no good reason to say “it can’t be”.

Blizzard has made it rather clear between what they’ve said about the “sub-races” and with Exiles Reach that we get to decide who we are, now more than ever.

I said it before, will say it again, if the devs were to give “highborne” options they would have done it already, instead they focused on the nature/priest themes.

RIP to the Blood Elves then. Guess they deserve and will get nothing… I find this to make little sense.

If they were to develop the story of the Highborne, they would not make the new race of Shal’dorei, which literally resembles the Highborne of the Kaldorei Empire.

Which is why we’re asking for customization. The Shen’dralar are not a new race of elf they are night elf highborne remnants. Thus, the few things (I’ve) requested for them.

Boat of the Shen’dralar left the harbour back in cata.

RIP to everyone requesting anything then I guess. Again this makes no sense.

It has more of a refined appearance than older building models do, though remains in line with the more natural appearance of the Druidic/Elune based Kaldorei culture with the vines and such.

Now this is valid entirely.

IF/WHEN they give Night Elves a new city it should use the updated architecture for all the Night Elven buildings that we see from Legion onward. (check out the restored Auberdine when we’ve won the Warfront for Darkshore for the better quality Night Elf buildings)

I wish at one point, we will see the cleanse of the REAL Temple of Elune.
https://imgur.com/a/iHE9PrF

P.S: Now its known as Tomb of Sargeras.

That… probably wont be possible. lol Its been so fel infused after so long. 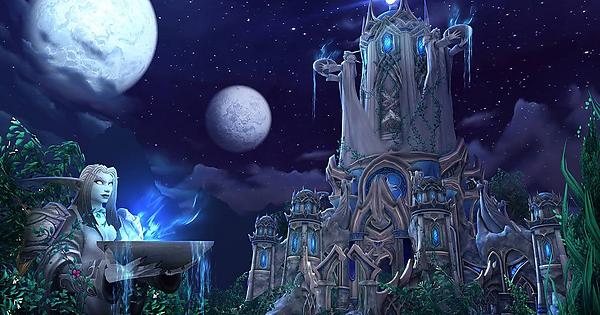 By the way, what would you think of the Night Elves choosing Azsuna or Val’sharah as their new home? I think it’d be a great idea because half of the Broken Isles are Horde territory now with HM Tauren and Nightborne going Horde, so I think we could try balancing that a bit by making either Azsuna or Val’sharah the new home of the Night Elves. In fact, I’m recalling now that the Court of Farondis elf ghosts in the Stormwind Portal Room are tagged as an Alliance race and actually kill Horde players on sight. Sure, it might mean nothing, but they’re there still…

The Night Elves are probably going to reestablish themselves near to something of value to their culture and its MOST likely that they would reestablish their old city around Nordrassil. (Prior to the third war their capital was there.)

Val’sharah in game I’d be a bit remiss because it would have to be phased and much like the AR’s probably heavily limited in scope.

I’d prefer if they revamped the old world again and made Mount Hyjal into a new starter zone instead.

As much as I love the Court of Farondis (especially because they are an actually preserved Highborne culture that has not deviated like the Shen’dralar and the Nightborne) I doubt that most Night Elves would deal well trying to live within their lands or that the Court itself would entirely be welcoming. Its still their land even if they are dead.

Plus that land is relatively less forested and homey for the Night Elves. Val’sharah makes a lot more sense, though again… Mount Hyjal is my bet.

EDIT: If they chose Azsuna as their new homeland, maybe they can even recruit renegade or rebel Naga as an allied race!! I’m getting excited XD

Thats not a bad idea all things considered but it doesn’t mean they need to be living there to still recruit them.

Can we get some boomkin customizations? Lol

I believe they are currently hanging out in Nordrassil, and I hope that’s their new home.

This is my understanding as well, and what I personally hope.

It would give them the best options for defending Darkshore and making inroads to retake their home in Ashenvale, not to mention continue reclamation of Felwood and push into Winterspring. All things that, if I were in charge of Night Elven storylines, I would be having them do.

My night elves have fangs damnit!

This is a list of my relatives and me, we had such discussions for years now.

One-sided hand transmog
Release of the remaining transmogs of the new beginner scenario
At least two alternative Heritage Armor colorization for each race
Heritage weapons
More race titles (of Highmountain, of Draenor, of Pandaria, of the Wandering Isle, …)
More banners to put on the back
Class glyphes like the Felgreen Fire for Warlocks or red/green Voidwalker alternatives
Making old FOMO items available for all players
Allowing the WoD Garrison transmog sets to be purchase with all characters to unlock them
Different voice actors for each male and female character
Body height/mass slider (they already have developed this)
Complete Pandaren love session. More of all, unique animation for holding kegs, staves and giving them belts with herbs

I would love a hub in Winterspring honestly, but I am biased because I love snowy zones, and so that’s where I imagine Avarie is from. But I loved Teldrassil so much so I’d love an updated treeeeeee city. Fire proof and plot armor proof.

Again this makes no sense.

Honestly, I don’t really understand much of what they are saying anyways. It is all just going around in knots.

This is one of my favorite places in whole game so I support this highly.

I would love a hub in Winterspring honestly, but I am biased because I love snowy zones, and so that’s where I imagine Avarie is from.

Hey Fezzy is from there too!

I’d have a whole thing about the Night Elves securing land in Winterspring to ensure Mount Hyjal was harder to assault.

It’s the best place to be from!

Just want to say im very happy with the new options. Love having my High Elf mage now with blonde hair and no tendrils to fulfill an old school Alliance Fantasy option of a High Elf sorcerer.

That said still hoping we get some new hair styles! The tentdril toggle is nice but the hair styles could still use some variety, especially for the Males. Would be perfectly fine with some hairstyles from Humans & Night Elves being shared with Void Elves.

As always, a toggle or option to change Entropic Embrace would be great! As well as Tattoos/Warpaint!

Oddly enough, my “main”, Anyaka is also from Winterspring.

It’s pretty and I was homesick. Part of my dwarf love is also their zones.

As far as I’m keeping up with the Great Highborne Debate, I’m not sure how much is actual disagreement and how much is just people talking past each other. But I’m all for going back to Azuna because I genuinely enjoyed all those tragic dorks from the Court of Farondis and I’d love to improve their situation somehow.

I’d play it in a second.

Lol, I say this with love but I feel like you are one of those people that either wants or needs more than 50 character slots.

I did not come here to get roasted!

I certainly wouldn’t have to delete one of my babies to make a ghost. That would be ridiculous! Almost as silly as mostly playing this game through mid level random bgs and tanking dungeons to level fun new toons with cool looks.