I guess it depends on the player. I been on the forums a long time and participated in many helf vs belf threads. Factions were definitely a motivation for people on both sides. I know for myself they were.

As for how things are now, I still see it. People seem more open to the idea of sharing things within their own faction like HMT/regular tauren and draenie/lfd, but velf/belf and nelf/nb? That just starts a whole ton of arguments.

Heck, both Autai and Averyx were dismayed over LF Draenei not getting legitimate lightforged oriented stuff but just more jewerly like the regular Draenei do. So not even the faction excuse works from that angle, cause we have here players that did NOT like the AR and the core race getting the same stuff.

Ergo, my point. Is not about “Horde vs. Alliance”, is about not getting scammed with copy/pasted races.

Don’t think I’ve seen any night elf NPCs with those options-- or even art.

The “closest” thing one can see regarding “bright tattoos” on a Night elf proper is Tyrande´s Night Warrior tattoos, but apart from that? Zero. milch. Nada.

I love that Night Elf architecture.

Hopefully they’ll build a new city based on that aesthetic. Maybe we can recapture Eldrethalas with the help of the Shen’dralar… Blizz you there?

There are so many new places the Night Elves could settle.

hahahaha, no way you did this? Look at you… impressive

i like the fine print on the bottom too

You should not be a Night elf to be a Highborn, any elf which has their nobility have the birth right to claim it.

Say it to Lady Vashj, who also claimed to be a Highborne even though she was turned into a Naga.

Also, explain the following quotes of the Nightborne:

“I cannot lose to a lowborn!”

“Lately, I have noticed, commoners do not appreciate us enough”

On another hand, I do not disagree with the fact, that the Nightborne are a different race, however, they think they are even better than the Highborne at the moment. Which is shown with their attitude.

You should not be a Night elf to be a Highborn, any elf which has their nobility have the birth right to claim it.

Can you explain to me on how did you get Quel’dorei from Nightborne/Highborne?

I love that Night Elf architecture.

Hopefully they’ll build a new city based on that aesthetic. Maybe we can recapture Eldrethalas with the help of the Shen’dralar… Blizz you there?

Honestly I don’t think the Night Elves themselves would be that interested really.

I’d expect them to establish a new city near to Nordrassil and not to be terribly different than Darnassus was. That said the temple of the moon and some of the stone structures we saw in Darnassus are not that different from what we see during Legion for Night Elven architecture.

I do think ya’ll taking this a bit far though. I get that its Night Elf - Highborne buildings in Suramar (And Thus Nightborne Buildings) but thats not really what the Night Elves would be likely to make now, nor are they going to refrain from more of their Nature Magic grown structures for their common buildings going forward.

Eldre’thalas also is really kind of a waste at this point. I could see the Ogres setup there as a new home but I don’t think any Night Elf, Shen’dralar or otherwise, would really seek that place out as a new home. (Though definitely to recover some artifacts or something like that.)

That name has shifted over time.

Quel’dorei tends to refer to the High Elves now, not the Highborne despite literally meaning the same thing.

Most of the time in game the name highborne is used to represent the old highborne and Quel’dorei is used to refer to high elves. Sin’dorei of course for Blood Elves, Nightborne or Shal’dorei for Nightborne… yada yada.

I get that its Night Elf - Highborne buildings in Suramar but thats not really what the Night Elves would be likely to make now, nor are they going to refrain from more of their Nature Magic grown structures for their common buildings going forward.

I don’t really agree with that, honestly - Night Elf buildings in Darnassus are (or… were…) just outdated. Night Elves never refrained from their imperial architecture. We have the ruins in Azshara for instance, they’re exactly the same as those in Darnassus. Or even Eldrethalas is very similar to Darnassus. Val’sharah, Azsuna…

I could see the Ogres setup there as a new home

No, no, no, no. I’d personally hunt every Ogre in game if that ever happens. I would sooner do like Sylvanas and raze the whole city to ruins (well… it’s in ruins now, but you get the point lol) than giving it to the Ogres.

Now seriously. I would prefer that Ogres have their own architecture, especially if they ever become playable in the future. It just wouldn’t feel right to play an Ogre in an Elf city. Just my opinion, ofc.

Indeed, and so is Highborne, which is why it’s not exclusive to the Nightborne.

Some of the items seem to use the name Kal’dorei idk why not used tbh.

Indeed, and so is Highborne, which is why it’s not exclusive to the Nightborne.

The Kaldorei resistance, have denied the Quel’dorei culture, as well as they fought with them, they made their own culture, which mostly focuses on druidism and priests.

Highborne in the Kaldorei Resistance, which joined in the Cata are mentors for the young nightelven magi, PLAYER magi nightelf are not a Highborne to have the “highborne” options.

It is never ending argument to be honest, y’all won’t stop demanding it, and other group will never stop protesting against it.

I said it before, will say it again, if the devs were to give “highborne” options they would have done it already, instead they focused on the nature/priest themes.

If they were to develop the story of the Highborne, they would not make the new race of Shal’dorei, which literally resembles the Highborne of the Kaldorei Empire.

Boat of the Shen’dralar left the harbour back in cata.

I would also adore updated Night Elf architecture for their new capital, such as the Temple of Elune in Val’sharrah. 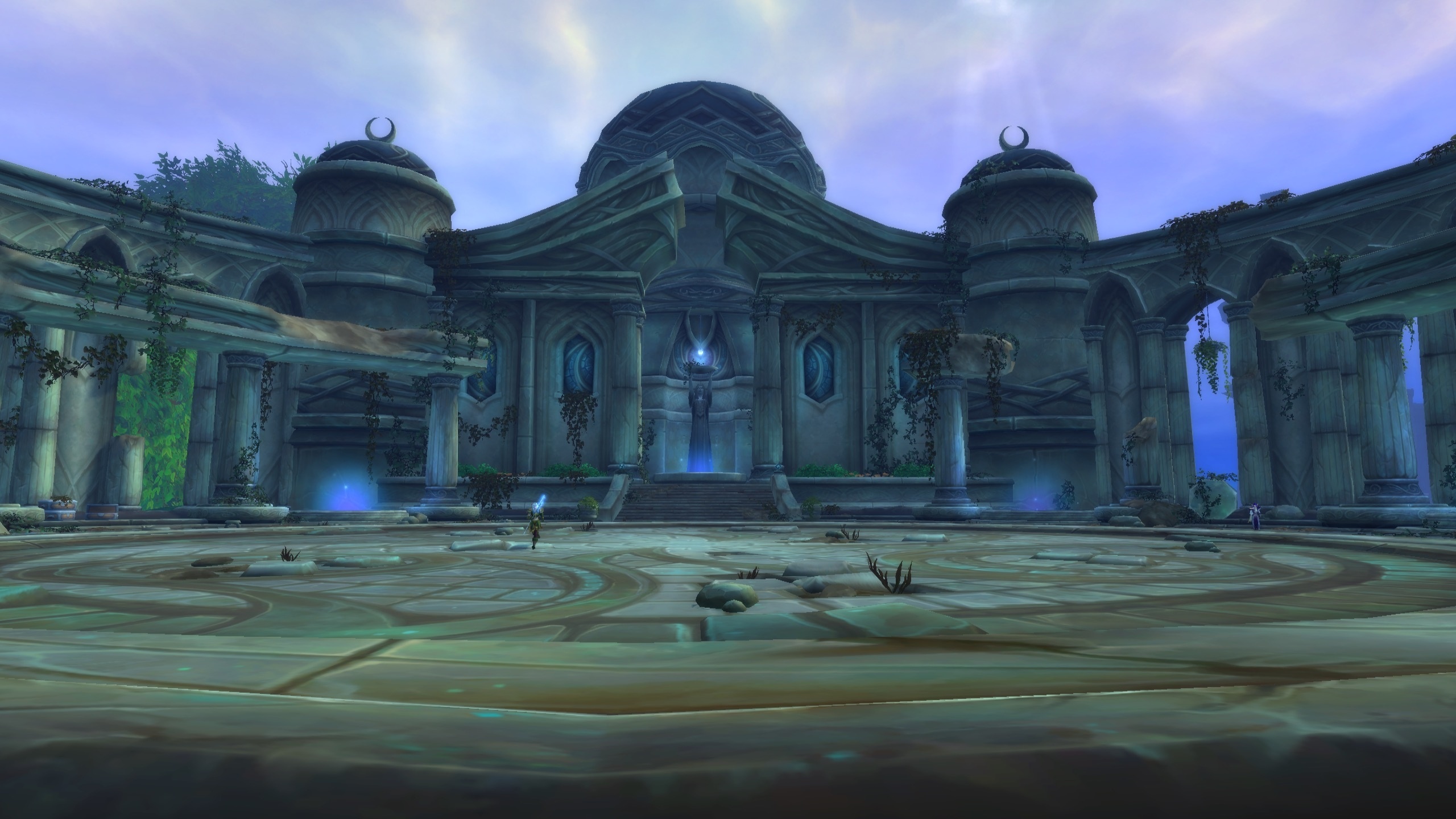 It has more of a refined appearance than older building models do, though remains in line with the more natural appearance of the Druidic/Elune based Kaldorei culture with the vines and such.

I wish at one point, we will see the cleanse of the REAL Temple of Elune.
https://imgur.com/a/iHE9PrF

P.S: Now its known as Tomb of Sargeras.

That is the type of Night Elf architecture I’d love to see if they ever have a new capital.

Put some more Nature stuff on top and voilà.

So, please, explain to me, what does Quel’dorei have anything to do with what we were talking about?

By the way, what would you think of the Night Elves choosing Azsuna or Val’sharah as their new home? I think it’d be a great idea because half of the Broken Isles are Horde territory now with HM Tauren and Nightborne going Horde, so I think we could try balancing that a bit by making either Azsuna or Val’sharah the new home of the Night Elves. In fact, I’m recalling now that the Court of Farondis elf ghosts in the Stormwind Portal Room are tagged as an Alliance race and actually kill Horde players on sight. Sure, it might mean nothing, but they’re there still…

EDIT: If they chose Azsuna as their new homeland, maybe they can even recruit renegade or rebel Naga as an allied race!! I’m getting excited XD

You really need to open WoWpedia at least, please do not say it anywhere outside this thread.

Quel’dorei is a term meaning “children of noble birth” in Darnassian or “high elves” in Thalassian.

The Quel’dorei were the upper classes of the ancient kaldorei icivilization, at first a nameless caste made up of night elves who had unusual intelligence, strength, skills, or wealth and thus found favor with the ruling monarch. Their vast arrogance and greed, garish and multicolored clothing, and decadent habits did not endear them to other night elves. In fact, these powerful families became convinced that they were superior to the rest of their race, and so they began to call themselves the Highborne aka Quel’dorei.

All elven languages come from the old Kaldorei language.

You really need to open WoWpedia

Open up a webpage on the internet where people can edit anything on there and make it seem like Canon.

Your knowledge fascinates me, you have proven to me that you are unworthy of my time. 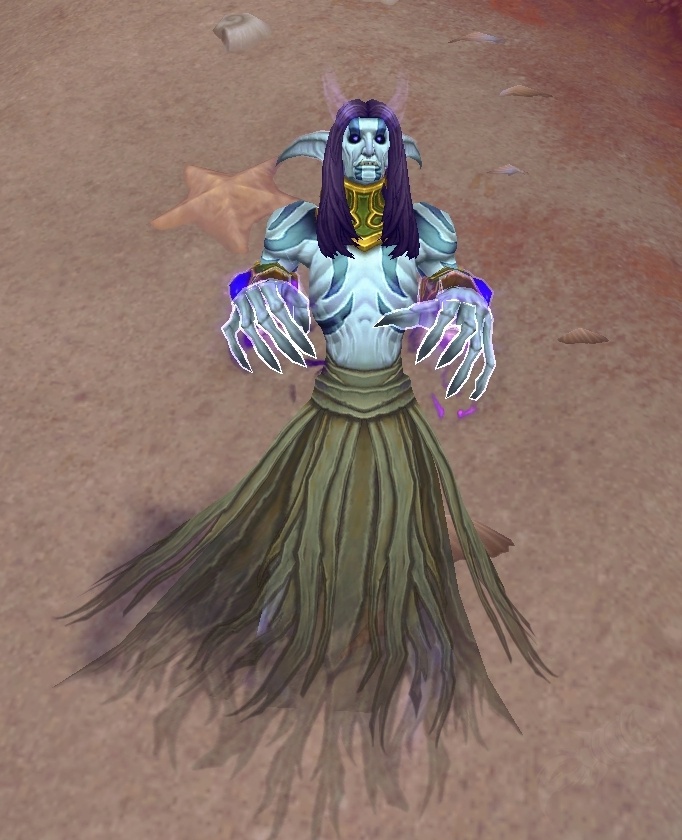 Your knowledge fascinates me, you have proven to me that you are unworthy of my time.

I’m sorry if all you care about is headcanon.

While your right on one thing, the Thalassian language did come from the Darnassian language, one thing you need to do, is provide some actual lore to prove your claims.

one thing you need to do, is provide some actual lore to prove your claims.

What about the Quel’dorei tome from Nazjatar? Has this been brought up before?

It is looted from Glowing Arcane Trunk. In the Junk Items category. Added in World of Warcraft: Battle for Azeroth. Always up to date with the latest patch.

Therefore, Thalassian is one of the four known elven dialects which is used by Ren’dorei, Sin’dorei, and the modern Quel’dorei.

What is the point of me texting these walls of texts, if it mean nothing to you?

You just stubbornly denying the facts.

The Highelves were Kaldorei Quel’dorei, therefore they kept their name as Quel’dorei, meanwhile other elven races have changed their names.

Like for instance the Shal’dorei did, they renamed their race name, as they had no connection to the sunlight, moonlight and they became children of the Night.

Sin’dorei have changed their name from Quel’dorei to honour the fallen, by naming themselves Children of blood.

There is no need to link any lore texts, anyone who has interest in the elven culture of the World of Warcraft knows, that the all elven dialects drive from one language which is the ancient Darnassian.

If you would like to ignore it, so be it. Nothing new to me, after seeing your stubborn replies.