Where are the Devs? Lack of discussion

Hello, I see you replied to the thread. You, sir, are 120% correct. The fantastic developers are clearly listening to the community at large. With great changes such as nerfing Soar, Dragon riding, and keeping the slimy cat away from LFR, its clear they are improving by leaps and bounds!

Thanks for your post and have a great day!

They have explained their reasoning in terms of developing soar and dragon riding and I do agree with their vision but the slime cat issue is everybody’s problem.

Atleast they did added anyways and you think they can press a single button and magically will be in the game when that’s not how things work in reality.

Then why aren’t they communicating that which they do and don’t listen to and why? Other successful developers can accomplish this even with smaller studios.

Zereth mortis is a experimental zone and to try things out and stuff and they (blizzard) have admitted they have neglected the open world content for a long time and they will remedy that in dragonflight on the dragon isles.

Do you know what’s a cook book in software development? They already have issues with currencies not being account wide and caches for anima, soul ash, cinder…etc

At 9.2 development, Devs should have already that learned and marked as an approach for any new currency that’ll be obviously required for alts, instead of waiting for hotfixes later and a bad response from the community.

Rewards the ***glesworth Sr. mount. (you cant post the mount’s name on the forums)

Currency wasn’t designed to be accountwide nor was it originally and it would be endeavor to make it so. The only thing they can do is to add an accountwide item to walk a neutral line.

Just like cross faction it would be an incremental step to undo decades of faction worth of coding.

A whole post why Soar speed is bad for players because a specific race could travel faster…What’s next removing Druids the ability to pick up things on flying form?

That’s the problem,we’ve a currency that was required for each character legendary during 9.0 then 9.1 brought the packaged soul ash with a tax value. 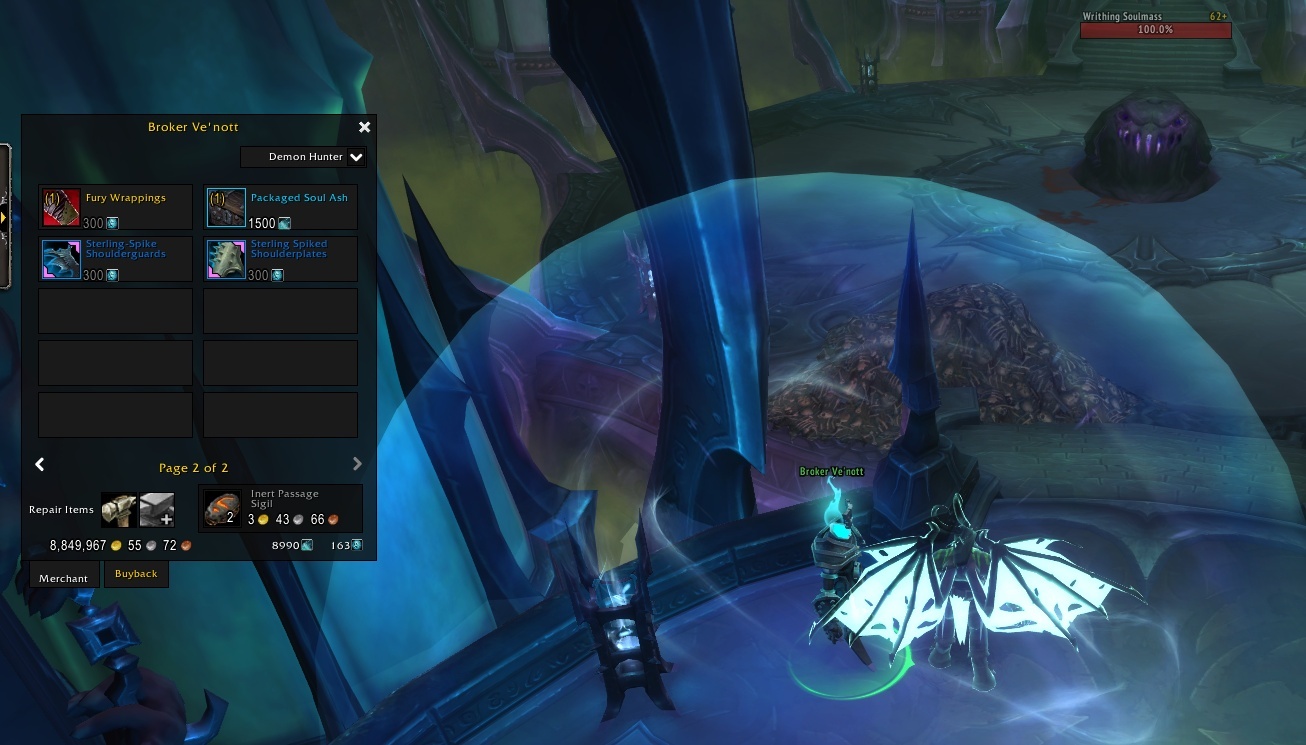 The Packaged Soul Ash Item is bought from Broker Vendors in Torghast, but they only seem to sell one item at a time. If you want to transfer Soul Ash across your characters, you're going to need to run Torghast!

if they already knew that players want to exchange currencies related to legendaries creation, why 9.2 didn’t have a cosmic flux package since development phases.

I love how everyone think legendary stuff are all a big deal when it’s optional. And maybe because they want to control the speed of gearing for the high end people. Or maybe out of fear of running out of content for people if they got everything on day one of everything.

But anyways I am done talking.

blizz may say “we changed”

but actions speak louder than words

It was clear from the beginning that they only backpaddled due the negative reaction the game got over months.

We all gave them a chance but it looks like they have not learned anything the past year. I’m still waiting for the catch DF will have. I do not trust these developers.

The S4 team from everything I’ve heard is very small, and everyone else is working on Dragonflight. It makes sense that there wouldn’t be as much communication with S4 - it’s basically just a mini-season meant to shift peoples focus away from the super-hard SOFO raid and onto more accessible/easy gearing via raids+dungeons

The biggest problem with the “they’re just the vocal minority so ignore them” mentality is that has presumably been Blizz’s mentality for a long while now and most people tend to agree that it’s a bad one.

It’s always a “vocal minority” when it is getting uncomfortable. It’s just another excuse.
I remember reading that the “vocal minority” wants to have flying back in WoD. Turns out, it was the majority of the players. I also remember reading that Horde-bias and faction imbalance is an agenda from a small and loud group. And yet again it turned out to be false. The developers did push the Horde and left the Alliance dying. So much, that we have a new faction-system available where people can join other faction-parties.

Deflection for what? This doesn’t even make sense lol. Most people consider this to be such a minor thing, comparing it to flying is absurd. A singular normal mode achievement mount is not at all on the same scale as flying. I have no idea how faction imbalance is even a remotely accurate comparison.

I’d like to see the Community council live chats…mentioned somedays ago by Mike that he’ll review that with Devs.

Deflection for what? This doesn’t even make sense lol.

Of course it makes sense. Your goals are just different from other people.
Just because you are likely male, single and have no obligations in life (but keeping you alive through a job) and have the time to raid, this doesn’t reflect how perhaps a married person with children feel.

Time is a luxury. Not everyone has it but they pay the same money as you. I dislike the mount and find it’s a dreadful thing but as a producer and developer I would at least include as many people in getting this mount instead splitting the player base in unnecessary ways. Who in their right mind would do this? FOMO is another problem of this cake but the whole situation is customer-unfriendly.

Just because you are likely male, single and have no obligations in life (but keeping you alive through a job) and have the time to raid,

is this intended to be serious?

You have time to post 3500 times on a forum, just the same as me. Nobody thinks you’re short on time.

Who in their right mind would do this?

People who want to get it will get it.

People that don’t want to don’t have to.

They don’t do live interviews anymore because it will only backfire for the incompetence they have shown in the past.

is this intended to be serious?

Yes. I’m aware that you’re likely a younger person, who else would end their sentence with a “lol”. You are single, male and have the time to hang out till 2 am during the week, no?
You are the target audience. Young, in school or college. But they are people playing who have been there since the beginning and they do have careers and children at this stage in their life now. Imagine how it feels to have a hobby with an aging demographic which you clearly love but the developers live in their own artificial bubble. It’s just horrible.

The game needs to change and reflect the customers.