Let's talk about the strange implications of Alleria and Turalyon's relationship

So I’m not alone in thinking it’s a recipe for disaster, right?

To start us off-- mild spoilers, but the Turalyon is going to be in a high position of power while Anduin is missing and trapped in the shadowlands for a bit.

We also know that Alleria and Turalyon cannot physically touch, which means that they are a couple that can never engage in physical intimacy again. On top of that, they have clear philosophical differences, and it’s stated in paratext that really the only thing that’s keeping Alleria sane is hope for her son’s future.

We’ve talked about bigger plot implications before but I kind of want to examine this on a more personal level.

If I remove any semblance of fantasy context and said “I know this couple. They don’t really agree very much, they never touch one another, and they don’t really have a lot of passion for the other mentally. On top of that, the only thing keeping the mom sane is that she cares about her kid.”

When you put it on the table like that, it feels really bleak, and really relatable to people who have had parents in bad relationships, or people who have felt trapped in relationships that didn’t work out for them that they couldn’t escape due to some sense of obligation.

On top of that, there’s that lingering ilgynoth quote: The golden one claims a vacant throne . The crown of light will bring only darkness .

Lots of folks thought that quote was going to be about Calia, but it really points to Turalyon for me in many ways. Turalyon is lightforged, he has filled an empty throne, and his wife is an archon of the void-- of utter darnkess. We also know that blizzard has said that the cosmic war is going to shift to dark vs. light in future expansions as opposed to the chaos vs. order arc of the burning legion.

I think what alliance players have wanted for a long time in their story is meaningful interpersonal conflict. Even though Tyrande and Genn have long seemed like prime candidates for that, I think Vareesa and Turalyon may have a big role to play in terms of how the alliance may change significantly.

I mean, its an interesting notion, but I highly doubt with how Blizz writes the Alliance they’d be able to commit to that sort of thing. I really doubt that just Turalyon’s current position would be impetus enough for him to go full Zealot; especially on his own wife. And as long as nothing happens to her son, then honestly I expect nothing to happen to Alleria.

I do expect Turalyon’s current position to result in some sort of conflict or tension, but I don’t feel like its enough on its own. I also expect that it will likely tie into the next cosmic force we are meant to face after Death. I however have no idea what sort of catalyst could be used to push him over that edge, beyond maybe the Lightbound and Yrel coming in to play a role? Its not like the Alliance has any insight on how insane AU Draenor became; and with all the Peaceniks gone I really doubt there is much communication between the two faction to queue them in.

As far as a catylyst goes, I think it depends on what the naaru and void lords do, because it’s tacitly implied that both alleria and turalyon do not have a lot of free will depending on how much pressure their cosmic patrons put on them-- though alleria herself seems to have slightly more free will.

I agree that blizzard may not capitalize on the stuff that is there between turalyon and alleria, but I think there is a lot there for them to work with if they wanted to tell an interesting story about internal alliance conflict. All of the pieces are there.

We also know that Alleria and Turalyon cannot physically touch

In Shadows Rising, they both touch. I believe the instance in A Thousand Years of War was just because Alleria had not yet fully commanded her new powers, and it volatility manifested.

Ah, did not know this. Thank you.

Thematically, that seems to implicate their story will be one about healing and setting aside differences.

Which… I think undermines any possibility for inter faction conflict once again. I’m sorry alliance players. >.>

I mean, not really. All it implicates is that Turalyon and Alleria can touch. Their actions in Shadows Rising still remains the same, and the implications of political turmoil between Greymane and Turalyon are still there.

The Alliance isn’t just Turalyon and Alleria. Inter-factional conflict is not going to be determined solely by their relationship.

Mm… maybe, but maybe not. 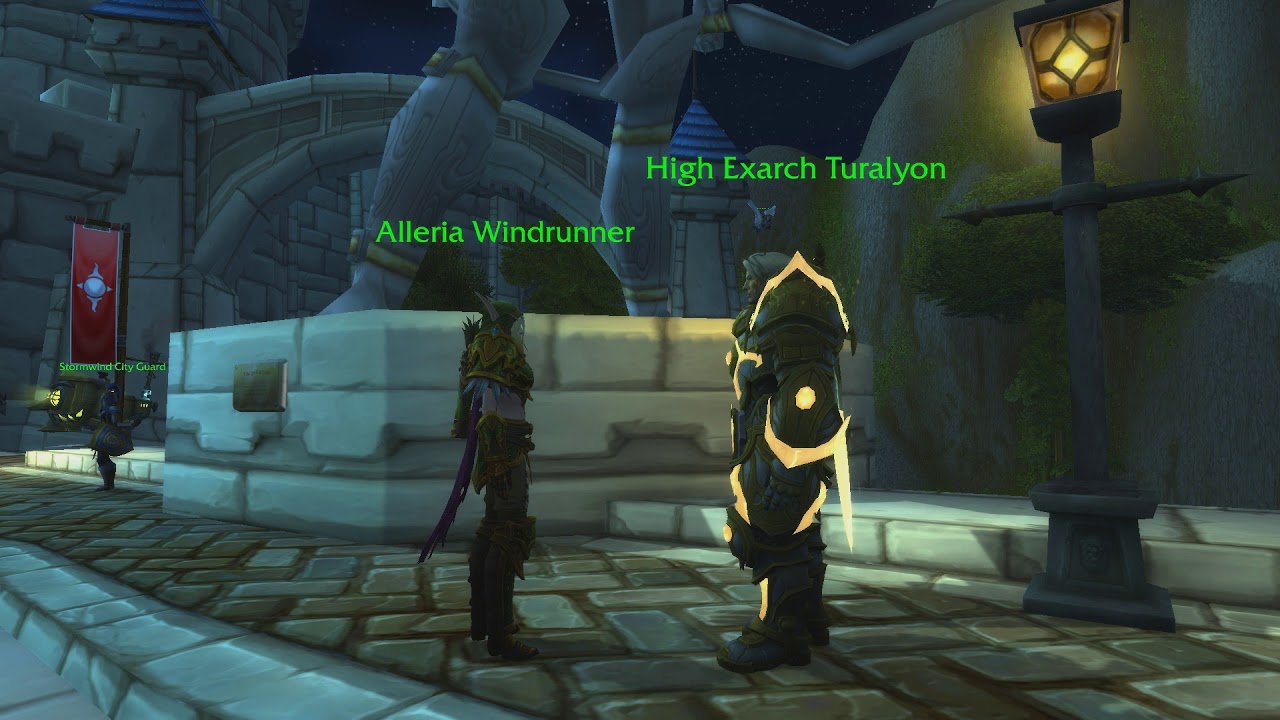 On top of that, there’s that lingering ilgynoth quote

There is at least half a dozen options that would fit this one.

I would point out this summary of the actual Turalyon’s character: The Userper *Spoilers*

When your thrones run red with betrayal… when your holy places burn and the shattered mask hangs above your hearth… only then you will know. And it will be too late.

The Alliance isn’t just Turalyon and Alleria. Inter-factional conflict is not going to be determined solely by their relationship.

You’re right, but I think the chance of their specific divide occurring lessens because they can physically touch. I could also be reading too into it.

Pretty much. It’s extraordinarily weird to me the LForged are at least tolerating the Void Elves as allies because their leaders are a couple.

Like why is Turalyon even in charge? He’s basically a cosmic stray they picked up. Wouldn’t they be more prone to assuming his wife is clouding his judgement, especially after he uses the Light to hold defenseless civilains down as she Void mind grapes them? To the point where a Forsaken Apothecary became the voice of moral reason?

Obviously the Horde is not without it’s odd couples. But at this point they’ve all fought side by side for years. It’s not hard to imagine that at this point a Tauren trusts a Goblin to guard his shrine to the Earthmother or a Darkspear let a Forsaken babysit her kids.

But the Velves and LForges have just recently met and it’s just weird they’re so instantly accepting of eachother. Hell in SR a LForged uses a void portal. You’d really think they’d never even consider stepping into something like that.

To be honest, I think you might be. When people talk about inter-factional conflict on the Alliance side, they look at cases like Turalyon and Alleria’s methods of torture in Shadows Rising, or Genn and Shaw musing about whether Turalyon should be on the throne.

I haven’t read shadows rising yet, so my lore knowledge is slightly out of date.

I’d give that a read. It might change your perception of the two somewhat, and of what the potential Alliance conflict might stem from.

why is Turalyon even in charge?

especially after he uses the Light to hold defenseless civilains

Well, to get to this conclusion you also have to omit the parts around it. About limited time and attempts to get info without such methods.

You’d really think they’d never even consider stepping into something like that.

It is almost like the whole “light is evul” idea is mostly an echo chamber, repeated so much that people believe it to be true.

It is almost like the whole “light is evul” idea is mostly an echo chamber, repeated so much that people believe it to be true.

I think it’s more that people want it to be true because they’re so used to light= good and void = bad. We have seen naaru do bad things on screen at the very least.

I think both of the void and the light are neutral but greedy, so they just want to dominate one another. That doesn’t make them inherently bad but it does make them cause a lot of bad things to happen. Although the void does seem like it’s portrayed more hungry and destructive than the light as a whole.

I know it’s a petty thing but I feel disappointed to hear that the two of them can, in fact, touch each other now. What would be the point in having them embody polar opposite power sources if the previously-established penalty went away?

I do think it undermines that theme, yeah. What makes wow hard to predict sometimes is that themes can often be established in one expansion and then not apply when different writers enter the mix.

As a side note, whenever I see one of these Old God whispers that may implicate an Alliance character, I always thing that when it comes to fruition its going to be the most milktoast, mundane thing ever. “The Golden One claims a Vacant Throne. The Crown of Light Will Bring only Darkness”. Essentially, its just Turalyon installing magical dimmer switches within SW Castle.

MY GOD! What on Earth did he eat to bring ONLY Darkness?! Lightforged dietary plans really did a number on his Human bowels. Anduin needs to have that room condemned when he gets back.

I still don’t know what the three lies Anduin or Wrathion told were. :T