As much as I wish the past three years didn’t happen, we’re stuck with what we got, so, ideal wish granted scenario 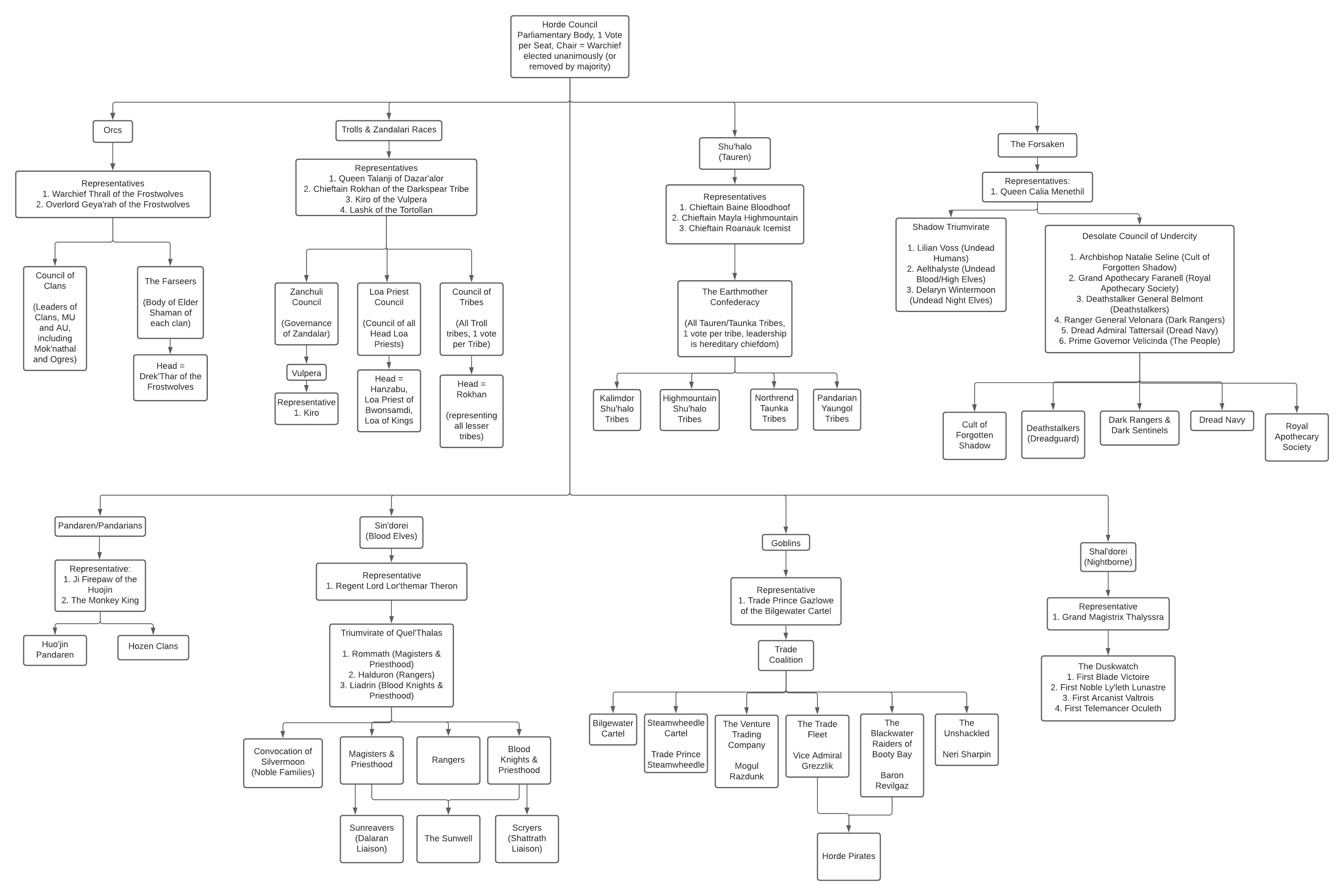 The Horde Council would be thus:

And odd number such that in the event of a tie, Thrall is the deciding vote. Warchief (Presiding Officer) is elected only unanimously, but can be removed by simple majority (50% + 1)

Important Addendums in such a scenario:

Gonna do Alliance next.

Yes, all Alliance-race pirates will be under Kul Tiras, under Lord Flynn Fairwind as the secret Pirate King

Borrowing from colonial privateers working for their respective crowns.

edit: oh and Governor Velicinda is back because why not, we’re in the Maw, she was cool. I’d get Brother Zelling back too tbh. 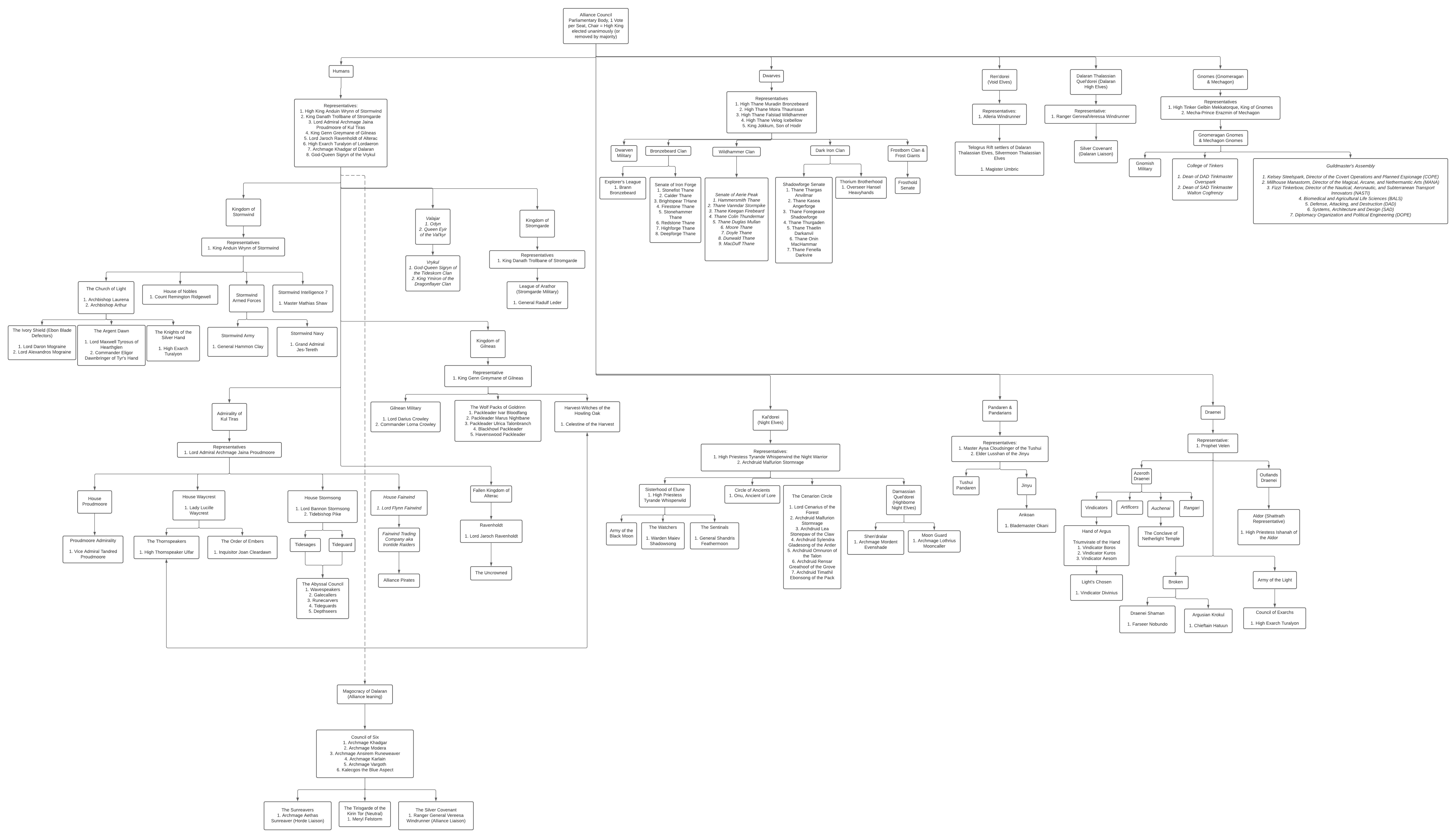 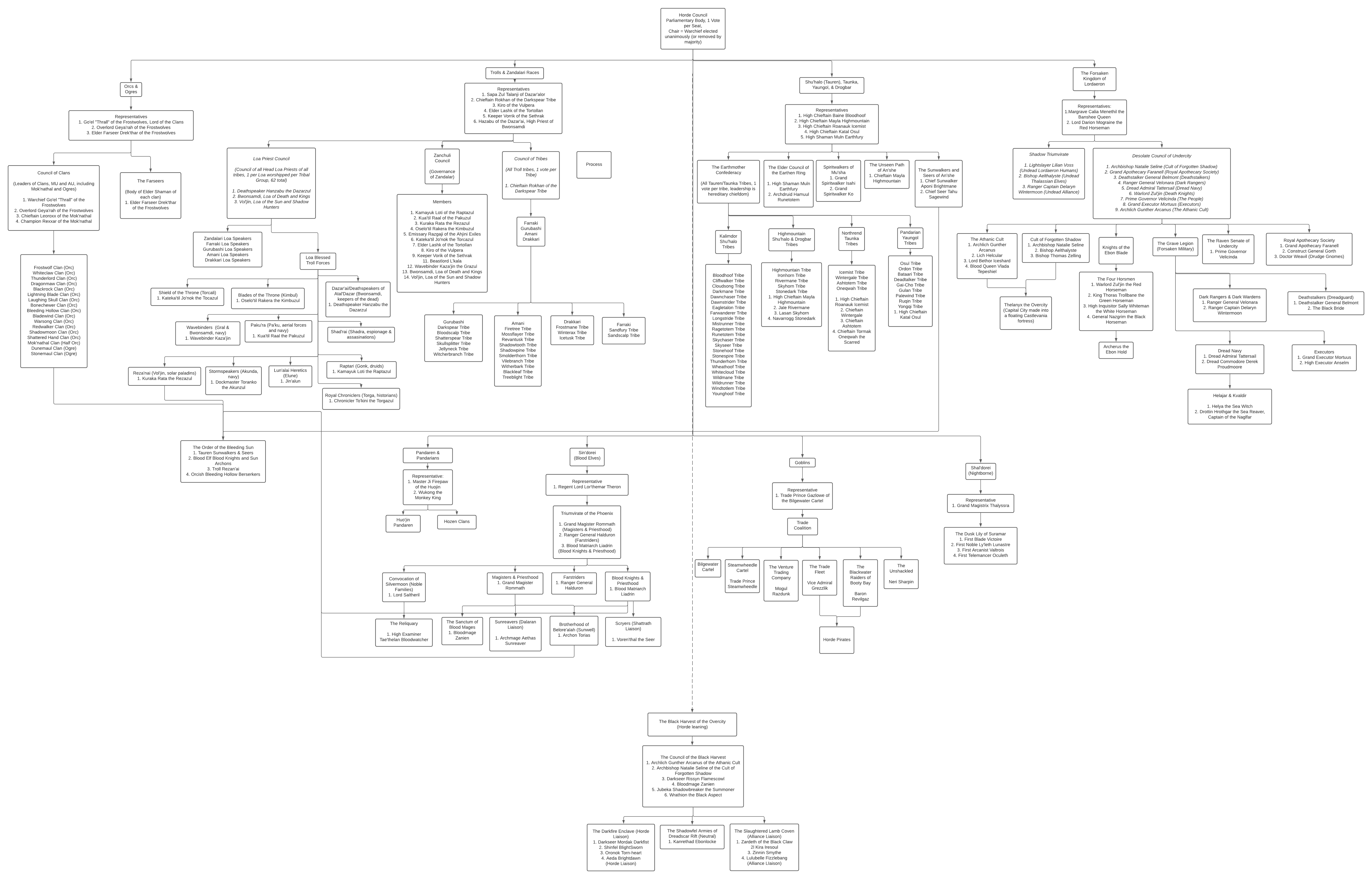 It still annoys me she never ranked up to this title. She could not have a more blatantly obvious successor as first arcanist than Valtrois.

Seeing those words together again after all these years makes me happy.

In all seriousness, Thrall returning to a political position was a real highlight for me. Reading about him at the head of a Horde Army in Shadow’s Rising sent shivers down my spine haha! Warchief Thrall was always the best version of Thrall.

Anyway, totally support this idea overall. Although, are the Tortollan a part of the Horde now? Missed the memo on that one if so!

This becomes a case of Chekhov’s Gun. Because Lor’themar has established a means to replace himself, he will be replaced.

Sure are a lot of war criminals on that Forsaken council.

Anselm would be under Belmont and Nazgrel would be part of the Orc council! I wasn’t about to list everyone lmao

Just look at the Zanchuli Council

This becomes a case of Chekhov’s Gun. Because Lor’themar has established a means to replace himself, he will be replaced.

Although, are the Tortollan a part of the Horde now? Missed the memo on that one if so!

They were added to the Zanchuli Council, so it stands to reason they are, since all their homes are in Zandalar while only an outpost and a few bars exist in Kul Tiras.

Seeing those words together again after all these years makes me happy.

15 people? I’m not sure blizzard is competent enough to write such a system…sadly

Just put me at the top.

I can run the Horde.

15 people? I’m not sure blizzard is competent enough to write such a system…sadly

The Horde Council in canon right now is 12 people

The only people I added was Lashk, Roanauk, and the Monkey King.

And? Do you ecpect a good written council?

Well again, it’s what we got.

My wish granted scenario for the Horde Council as a body is literally exactly what we have except we add the Tortollan, the Taunka, and the Hozen.

It’s literally what we got already. You seemed to be unaware the Horde Council was 12 people as it already stands.

Whether Blizzard will actually make an effort (they won’t) remains to be seen, but hey, their choices, their problem!

Sure are a lot of war criminals on that Forsaken council.

I’d like to move a motion that we include Sylvanas and Nathanos on the Forsaken council purely to spite this guy.

I’d like to move a motion that we include Sylvanas and Nathanos on the Forsaken council purely to spite this guy.

I mean with Faranell and Belmont there you might as well

Their racial motto is “We will slaughter any who stand in our way” so like, they’re the Forsaken. They’re not the kiss-alliance-happy-zombies. War criminals is what they do haha

This council and the one set up by blizzard are pretty unrepresentative and unrealistic. Factions like orgrimmar should have a lot more votes than say the bilgewater cartel, or the bloodelves. They bring a lot more to the table.

And nah votes aren’t proportional to power, that would leave the Tauren with the least votes even though by all accounts they’re probably the most populous Horde race.

And again, it’s what we got.

I posted my ideal Horde Council awhile back.

UPDATED So, basically, the idea here, so that the Horde Council doesn’t end up as some kind of stuffy senate chamber, is to have all Council meetings take place at great feasts around a large table. The members get to hash out issues, stuff their faces, get into arguments. Essentially, really reinforce the idea that the Horde is like a family. And every Council meeting is like Thanksgiving Dinner. I decided to make up a little seating chart with current members as well as personal hopes for…

I didn’t come to this forum to get aroused, but it happened anyway

What you just said sounds super silly. Orgrimmar is and has been the literal backbone of the horde. The Tauren have been depicted as anything but numerous.