How long before we write the Community Council as a PR stunt?

Look Timba, you are not going to get a personal apology from Ion for the whole ripcord thing. Everybody that had that as a breaking point just left, and let’s be honest: This entire thread is about that, not whatever the CC does something or not.

I would challenge you to go read some posts my friend. We are definitely addressing contentious issues in the game, both retail and classic. The classic devs have already begun responding, and with any luck, retail devs aren’t far behind!

The classic devs have already begun responding, and with any luck, retail devs aren’t far behind!

Classic devs have a metaphorical gun at their head.

its not pulling up many wins. Sub issues, pop balance on servers issues (transfers not fixing too well for some), bugs etc. SOM not far behind. as even I can’t see how you can hose up code to allow OCE servers, and only OCE, to transfer from classic. And i have messed up some code.

TBCC is in a state it needs gold not possible to make via normal means for a decent chunk of its player base. It’s reaching the point it needs 3rd party gold to function really. Making new players…real iffy. New players they’d need to make WoTLK work. Otherwise its going to be TBCC part 2.

Posts like this really are not helpful to moving the game forward in a positive way. I can understand why you feel like it is a PR stunt however. It’s hard to give the benefit of the doubt after so many years of people like Caydeim, Ghostcrawler, and so on offering half answers; or people like Furor who were openly hostile and bore an extreme animus to certain classes, and had a certain unsavory mentality to how they conducted business.

But we have to do so, and hope things will get better.

The thing to remember is, none of these people affect WoW now. This is a good thing. I would give this a chance to succeed and the team the benefit of the doubt. If they fail, you could lose your game. If they succeed, the game has a more positive direction. More communication has been asked for, for a long time.

So far (and folks know I have been critical of Blizzard when I see nonsense), I have seen a good faith effort on the Developers part which I hope continues. No they can’t answer you every second, but nor should they feel compelled to. They are humans too and not your house-servants.

As long as they can they get a response back in a week or two, that’s fair and as far as I’m concerned a huge improvement over the once in a while interviews. They have teams and they have to discuss things on their side too, the same as we do. Moreover, can anyone fault them a little free time to themselves also? WoW is not their only reason to exist. Many have families, spouses, or lives outside of work. Respect that.

Besides what do any of us have to lose by giving them a chance? Nothing.

Just kinda sucks, this could’ve been something great.

Literally never could have been something great. The entire concept is flawed. 100 people, especially people hand-picked by Blizzard, can never be representative of the larger playerbase, even if they go out of their way to pick people that specialize in different areas of the game.

Worse than a PR stunt – it’s an excuse to blatantly ignore feedback from the larger community.

Admittedly, I see it as a PR stunt; however, I do trust some of the council to do right by the community and I want to give those who are on board a chance even if my game time ends in a few months. I do feel the CC should branch out and go outside of their comfort zones so they can get a better understanding from those who play a different part of the game. I get the impression some of them are afraid to do such when they shouldn’t be. There are a lot of those here who aren’t as hostile as they might think, and they would be willing to help out.

It helps that you didn’t decide to tear it down and build it again every 2 years. Parasitic design is easier than adding to core game features, which is why they’ve been doing it for years.

Look Timba, you are not going to get a personal apology from Ion for the whole ripcord thing

Don’t really know what that’s got to do what we’re discussing here. But please do go on

Most people wrote it off as a PR stunt the minute it was announced.

If it was a PR stunt, it was terrible one. Announce a system to advertise that you are going to start communicating with players as an answer to the many complaints about Blizzard not listening to the community. Then, when the community council starts posting, you totally drop the ball and don’t bother responding to a majority of the councils questions??? Just a terrible PR plan.

Perhaps they didn’t think it threw and got terrified of saying something wrong and upsetting the community versus communicating as promised? But, if that is the case, they elect to just reinforce the Stigma that Blizzard doesn’t communicate with the player base by continuing with a complete lack of communication?? That is one awful bad PR stunt.

I'm starting to think they are legally trepid and sorting ethical dilemmas such as how the larger community, especially the unseen crowd, can run away with a blue post. I get a half dozen reports each time a blue posts and the article picks each word and phrase apart. With that kind of scrutiny, it may not be possible to fully answer these questions. I mean they could just be like, "too bad, this is the plan; no we are not changing it."

classic is safe because it's old content. They cannot spoil much. It's more of a "well, this was true in the original, but we're trying to be Vanilla 2.0 with SoM."

i wrote it off as PR right as they announced it. if you notice anything related to blues and how quick they are to respond you’d understand why.

i was watching the asmongold vid of the interview he did with that 1 guy from the community that got banned from it forget why but it seemed like the both of them didn’t really care much in terms as yea it’s basically a PR stunt. the 1 guy got banned for sure so he was free to say w.e. he wanted the other guy i think chose his words more better don’t know if he got banned. don’t really know why he got banned i think it was having to do with a discord he made

After the past six years of hardheaded decisions and dismissal of feedback except when put under extreme legal scrutiny, did anyone really think the retail team cared about player concerns.

Community is a complete and utter failure. Empty promises and no follow up, complete disregard for player base time. But then again not surprised, what do you expect from a company with bigoted views

But it has not been an improvement in communication from the developers in my opinion, and many other peoples opinion.

I still think it’s too soon to start pressing for more Blizzard responses, I assume they are taking a more calculated approach. But in my opinion it’s their radio silence that was always the problem, not “poor feedback” from the community.

I’m keeping my judgment until 9.2. It’s only been one week after the holiday break. Some people have probably just returned. Some meetings haven’t yet happened.

THe council is going to have no affect on 9.2 . THey most likely will be focusing on the next expansion and not Shadowlands

I called it a PR stunt from the get go.
History repeating itself. 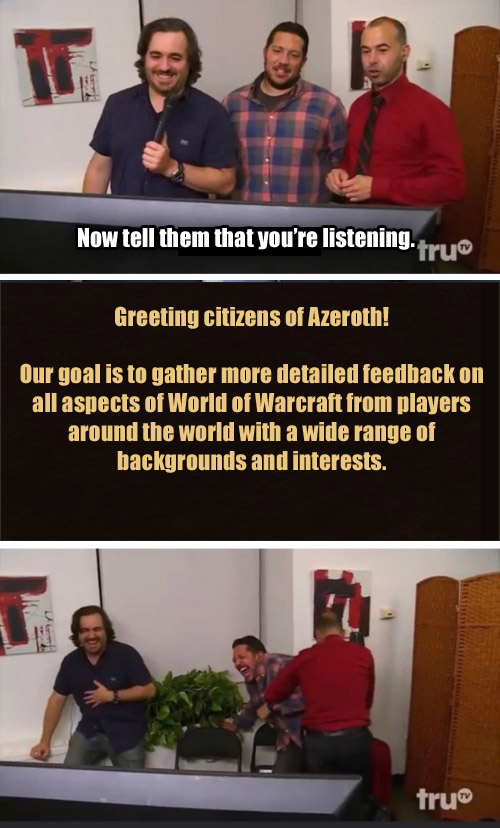 It’s only been out a week, calm down people. inhales copium

They’re on vacation, they’ll start responding when they get back. inhales copium

They have only been back a week, just be patient. inhales copium

(Never mind that there are discussions happening in the classic related threads, clearly showing that the devs have the time to read and respond to topics, it’s just the ones on the retail side seem to be carrying on like business as usual. It was always going to be a PR stunt. The feedback has been staring at them in the face since alpha and beta and a lot of it hasn’t changed since then. It’s hard to be optimistic when daddy Ion has said several times over the last couple expansions that things will be different this time and they will do a better job of listening. They did an awesome job talking to the community through all the interviews and discussions they took part in leading up to the release of Shadowlands, but when it came to feed back from the players they did what they always do which was to ignore it and then have it blow up in their faces later in the expansion. I can’t wait to unlock flying again.)

They already had a community council for years. It is called “forums”.

Just my tinfoil hat theory tho