GM: "Don't use *HARDWARE* input broadcasting to multibox, either, if you care about your account."

There are so many suspicious multiboxing druids out there. They might not be bots but you know they’re fishy. Just looking at the gear you can tell. Basically all they do is farm a spot or run around in a druid caravan farming herbs.

I assumed they used hardware solutions to dodge the recent changes and that this was “allowed”. I’d like some proof that you can actually report these people and that they’d get what’s coming.

Boxing isn’t against the rules. I really hope the more you guys false flag people the longer YOUR bans are for harassment.

I have never boxed though. Just don’t irrationally hate it for no reason.

Oh look, it took 5 tries to get an answer to a ticket, with several being off-topic. What a surprise. This is the posterchild of how Blizzard support is anymore.

Doing gods work. The butthurt multiboxers are mass flagging you too

This sounds like the current political rhetoric for a certain orange orangutan.

As World of Warcraft has evolved, our policies have also evolved to support the health of the game and the needs of the players. We’ve examined the use of third-party input broadcasting software, which allows a single keystroke or action to be automatically mirrored to multiple game clients, and we’ve seen an increasingly negative impact to the game as this software is used to support botting and automated gameplay. The use of input broadcasting software that mirrors keystrokes to multiple WoW game clients will soon be considered an actionable offense. We believe this policy is in the best interests of the game and the community.

We will soon begin issuing warnings to all players who are detected using input broadcasting software to mirror commands to multiple accounts at the same time (often used for multi-boxing). With these warnings, we intend to notify players that they should not use this software while playing World of Warcraft. Soon thereafter, the warnings will escalate to account actions, which can include suspension and, if necessary, permanent closure of the player’s World of Warcraft account(s). We strongly advise you to cease using this type of software immediately to maintain uninterrupted access to World of Warcraft.

Thank you for your understanding.

“we’ve seen an increasingly negative impact to the game as this software is used to support botting and automated gameplay.”

What they’re saying is their software detection algorithm is seeing key broadcasting software as botting now. It could be a change in Warden OR the botting software making it appear that keyclone software is performing the same actions as botting software. It doesn’t mention hardware broadcasting, as they CAN’T detect hardware broadcasting, because Warden isn’t allowed, or is incapable of testing your peripherals. Even if it was allowed, it wouldn’t be able to find anything. Especially if you take it to the extreme and directly solder keyboard outputs together, which is basically all a KVM switch does.

I do agree, they should clarify their stance, but that won’t appease anyone that’s against multiboxing anyway. It’s not their playstyle, so, “it MUST be cheating!” People whine about AH prices, when there is no evidence that multiboxing effects the economy in the first place, and you’re lying to yourself if you think there is.

Bottom line is this: Blizzard will specifically say, “Using a hardware solution to circumvent the ban on third-party input broadcasting software is now against our ToS,” IF they deem it necessary. So far, they haven’t. You anti-boxers don’t have a leg to stand on in this fight until they say so.

To be fair, i’ve been opposed to Multi Boxxers since Vanilla. But Blizzard was pretty up front they were allowing it. My choice was quit the game or deal with it. Neither would change anything.

Boxing isn’t against the rules. I really hope the more you guys false flag people the longer YOUR bans are for harassment.

Blizzard doesn’t ban for flagging, false or otherwise. Unless you’re BLATANT that you’re abusing the system and even then you have to really be pushing it. It is neither our responsibility, nor in our capability, to determine if someone is botting or not. All we can do is observe your movements and report suspicious behavior.

If it was clarified by blizzard then I’d like to see the post where they talk about the exact topic of hardware multiboxing. 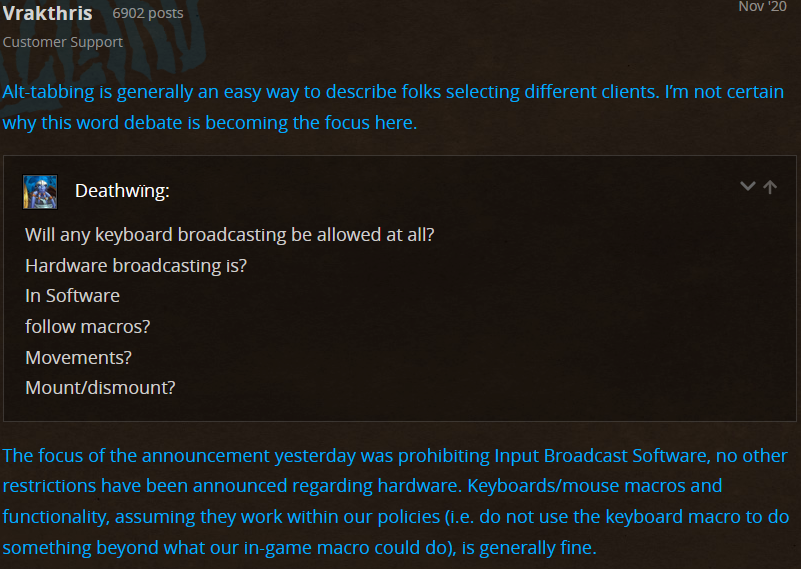 Can you PLEASE clarify a few things regarding multiboxing Customer Support

Alt-tabbing is generally an easy way to describe folks selecting different clients. I’m not certain why this word debate is becoming the focus here. The focus of the announcement yesterday was prohibiting Input Broadcast Software, no other restrictions have been announced regarding hardware. Keyboards/mouse macros and functionality, assuming they work within our policies (i.e. do not use the keyboard macro to do something beyond what our in-game macro could do), is generally fine.

My heartfelt condolences on your taste.

I mean he made a character named Dan. He’s really not winning any awards for imagination.

you’ll just keep moving the goalposts and claiming they just need to clarify one more thing for you and then you’ll drop it.

If blizzard flat out says hardware multiboxing is allowed, what can I argue about? I’ll accept it and move on.

Oh look, it took 5 tries to get an answer to a ticket, with several being off-topic. What a surprise. This is the posterchild of how Blizzard support is anymore.

it was answered with the first response.

they DID say that, they just didn’t use the phrase “hardware multiboxing”

That looks photoshopped. Multiple spelling and grammar errors in the supposed GMs response.

I call BS on this.

Agreed. As much as I absolutely loathe multiboxing, there were far too many spelling/grammar errors in that response to make me believe it actually came from Blizzard.

replying to myself, because i wanted to add this one too.

i’m quite convinced that the entire thing is fake at this point.

it doesn’t seem coincidental that the OP posts with the same types of errors.

(oops, i forgot to underline “So as what”)

and rofl at “play the game normally”

The GM has basically confirmed that it’s a frowned upon way to play the game and players that engage in multiboxing using these solutions can have actions taken against their account. This post basically clarifies stuff that was in a grey area.

Yeah, no, it did none of that and that GM has ZERO understanding of how hardware casting works.

Edit: for clarification, hardware casters don’t contain software. They use the software built into your OS.

So unless they are planning to ban all Windows users, this is a load of hogwash.

no other restrictions have been announced regarding hardware. Keyboards/mouse macros and functionality, assuming they work within our policies (i.e. do not use the keyboard macro to do something beyond what our in-game macro could do), is generally fine.

Later on in the thread someone asks this

Sorry, we’re not going to be able to providing commentary on a myriad of hypotheticals.

just answer the question REEEEEE. I’m pretty sure if they answered this single question almost all of the “myriad of hypotheticals” would also be answered.

yes, I’m sure that its small clockwork mechanisms that are copying the input from your USB keyboard and mouse to each USB host, keeping in mind UHCI / EHCI and possible different polling speeds AND responding / arbitrating between different queries and commands from each host for everything from mouse sensitivity to the LEDs on your keyboard.

All done in hardware, yes sir.

It’s an input multiplexer, not your string of Christmas lights.

Its okay man, no reasoning with them. Copium is a hell of a drug.

As much as I absolutely loathe multiboxing, there were far too many spelling/grammar errors in that response to make me believe it actually came from Blizzard.

idk what to tell you man. Blizz is clearly offshoring their email customer care. If I wanted to, I could easily have faked perfect English.

it doesn’t seem coincidental that the OP posts with the same types of errors.

I made 1 typo in my ticket when I said 14 year instead of 14 years. Look at my posts. I’m not saying my English is perfect but it’s far from broken.

I just want mutlboxing botters removed from the game asap.

so you’re ok with botters, as long as they’re not boxing?