Choose Your Druid Shapeshift Appearances in the Barber Shop

Any word on Shaman totems and Ghost Wolf?

Can we switch with unlocked Legion legendary skins too? please?

Also, it would be great if Shirvallah skins were available again

edit:people talked about toy appeareances, I’ve been using Bloodmane charm since shirvallah’s removal, you could remove the cooldown on this toy too (drop it from 30 to 3min cd, that wouls prevent spam abuse while keeping the buff duration of 5min)

That is unfortunate, so you’re basically saying we lose the ability to carry around multiple Druid forms and have to stick with the same one. If we want to switch forms, then visit a barbershop to do so. In all seriousness I do not find this an acceptable change, I like having multiple forms on hand and change based on the weapon I have equipped.

Please talk to them about allowing both methods in play, the barbershop variant counting as your base form while also allowing us to continue to transmog weapons with higher priority forms so we can properly change out in the open world or in dungeons. It serves two purposes, for many it gives them a visual cue on what weapon they are currently holding onto by assigning a different forms to each one. The second purpose is we may like to look different when doing dungeons, pvp, open world, or in raids; I love using the Owl Cat when outdoors, but swap to something more menacing when in raids like the Nightmare Cat.

To be clear though, the intention is still to only be able to use Tauren bear forms as a Tauren right? Couldn’t use the Troll ones too?

It would be cool to have account-wide unlocks for skins too. And Moonkin Form stuff as well.

I’m sure it’ll cost 800 gold every time you want to switch.

Could Worgen get their caster form (Worgen) added as an option for the Cat and Bear forms too?
Players could choose to fight like a powerful Feral Worgen.

Can we please get an update to the Treant model (to match the quality of other forms) and also get recolors in the barber shop? We already have recolors for them through [Force of Nature]. It would be nice for it to just become a baseline cosmetic spell and have it updated to match the other shapeshift forms. Pleeeeeeeeeeeease.

This is awesome. Cant wait to change my cat form while I’m a balance. Get rid of the bear claws? Yes please. Now we just need some more skins. Just like transmog sets, give maybe just one skin per spec, please?

Thanks for reminding me that I need to go farm my laser-bear form.

Can you please allow us to display bear/feral/moonkin forms on character select screen? I would extend this request to benefit to Shadow Priests in Shadowform

Also, this is awesome, I can finally have my flaming feral cat (Mage Tower artifact version) with matching red/orange Druid class hall set and not have the purple daggers that go with that feral form showing …

Is there any chance there is any consideration to letting Feral Druids somehow transmog dual wielding knives again? For example, this transmog was possible back in Legion: 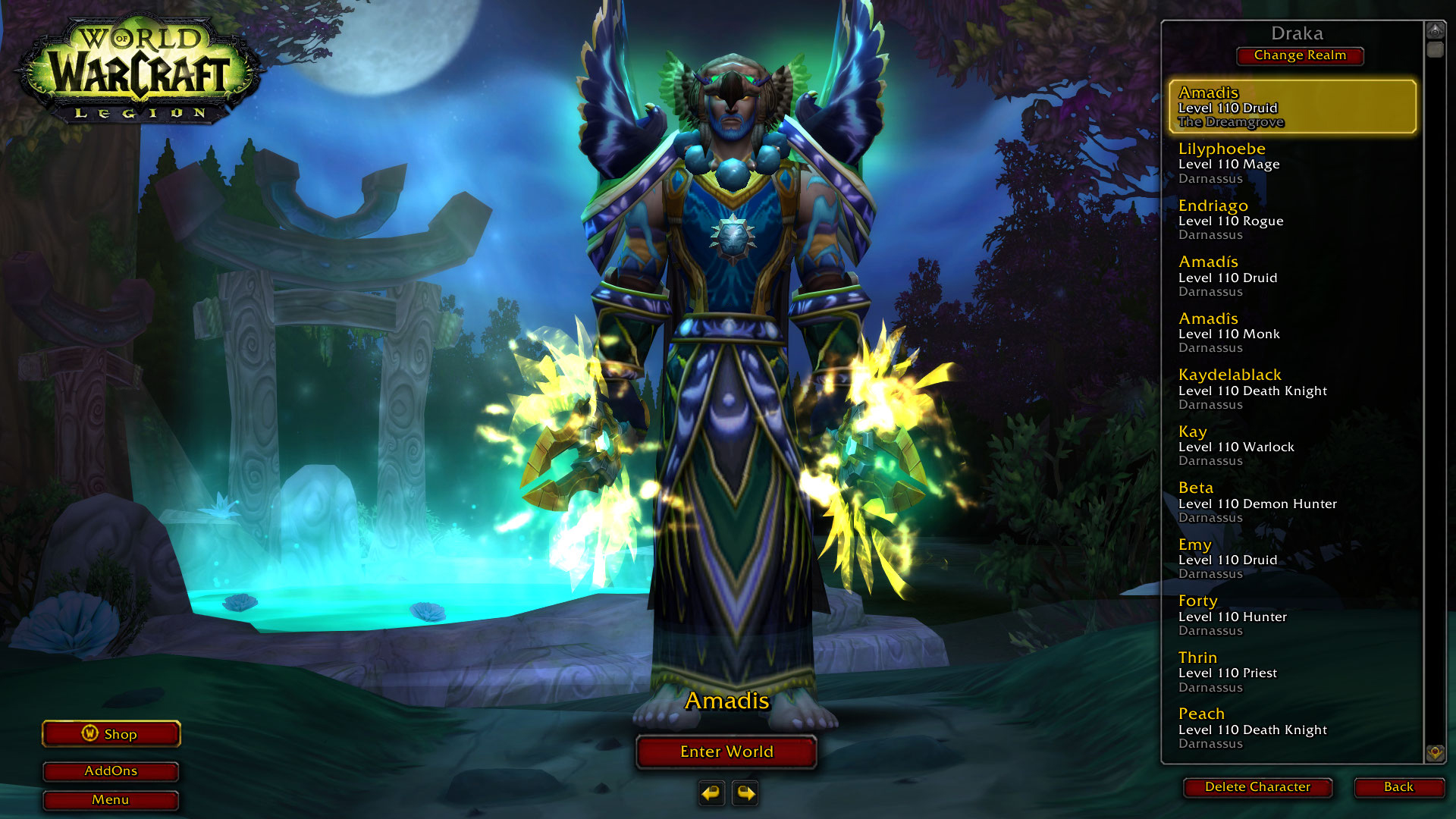 But is no longer possible using a current expansion weapon, as though we can transmog Staves and Polearms into the Fangs of Ashamane (as I currently am), you cannot transmog other knife appearances on them instead.

The only thing this kills is rave cat/rave bear. I’ll have to put this Weakaura to use before prepatch.

And will that include a green cat form because I would like to match my hair ?

I can shape-shift into my unlocked feral kitty and guardian bear artifact appearances while playing my restoration Druid? Is that what this is?

Wait, are you telling me I can be sparkle bear, sparkle cat AND sparkleboom?

we can use our purple bear skin as guardian { for example} as boomkin?

That is correct. Dev verified.

Will the artifact druid forms still be spec locked? Or will we be able to apply any form we’ve unlocked regardless of spec?

I find the pads on bird wings an odd choice.

Now that I’ve checked what I have, and what the other forms look like:
Feral: hoping for fire kitty, otherwise moonspirit (white)
Guardian: Don’t know, but working on Balance of Power and PVP ones
Travel: Cheetah
Flight: Fast Flight Form
Aquatic: Orca or Dolphin

In Shadowlands, Druids can travel to their local Barber Shop and now choose their Bear and Cat Form appearances separately from their character’s hair or fur color. This addition to the Barber Shop services will also include the option to select Bear and Cat Form Artifact appearances so all Druid specs can have the choice to shapeshift into their unlocked Artifact appearances and allow Guardian and Feral Druids to have more choices with weapon transmogs when choosing their Artifact forms.

The Barber Shop will also allow Druids to select their favorite Aquatic, Flight and Travel Forms so that they will no longer require switching glyphs to change the animal forms. These glyphs will now become a one-time use to unlock the appearance and switch the forms easily at the Barber Shop.

How about Vanilla style with no jewelry?

You can buy a book in moonglade that adds a separate stag form spell.

I cannot believe I missed this because I had purchased pretty much all the other ones at some point. Thank you.

I rode around in Boralus in doe form this evening b/c of you…thank you.