Edit: It Appears this theory was pretty much correct: 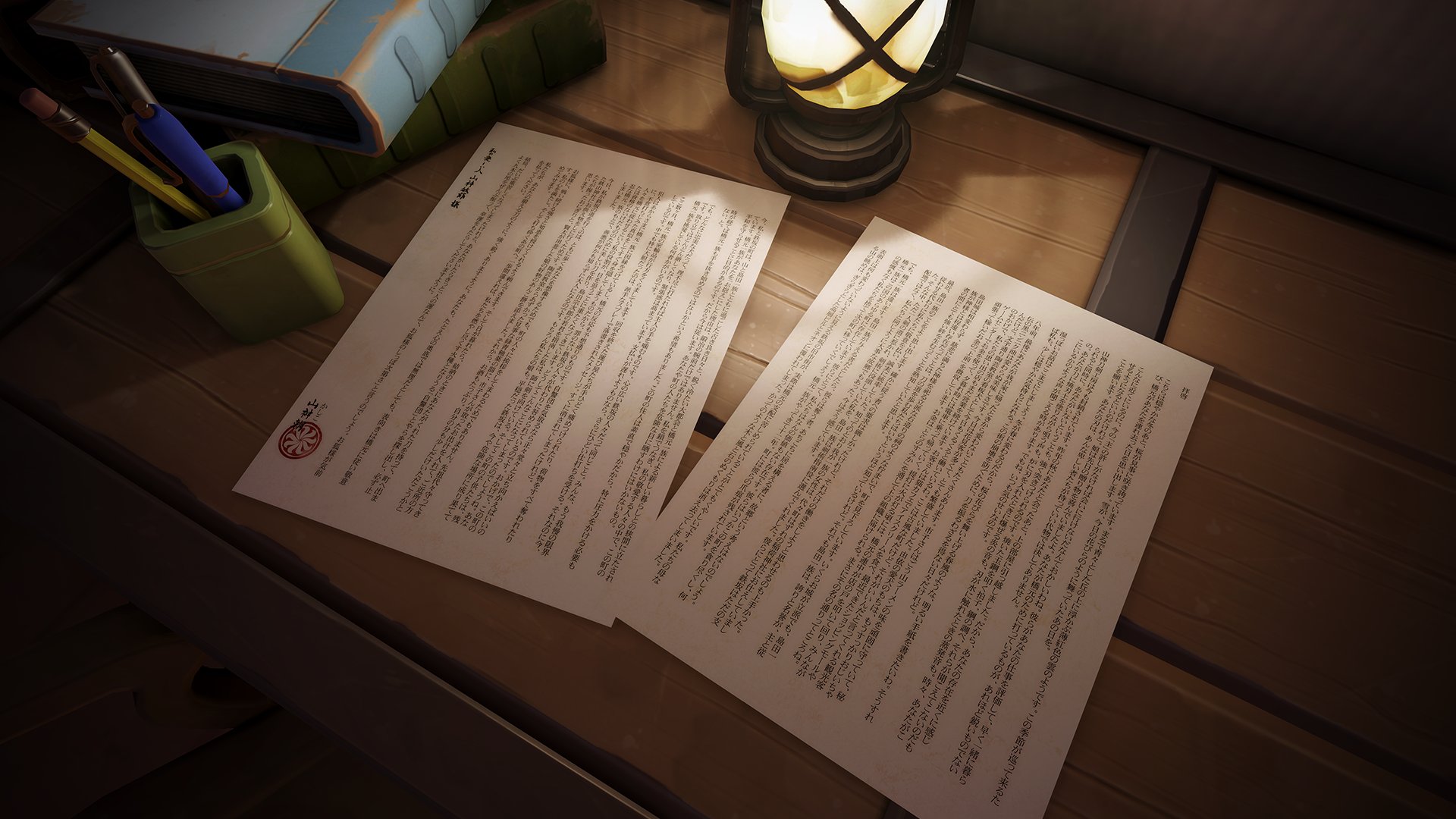 [CORRESPONDENCE] As winter leads to spring, let me write a letter of lightness. Perhaps it will grant us both a little peace, even as I turn my blade to keeping the peace here from shattering altogether. – Asa 📨 https://t.co/ZjcmZZcCI7

She ends the letter with:
" “The kitsune can change your luck with a flick of even one of her tails.” May she flick all nine of them and send some much-needed good fortune our way. "

So this confirms the Kistune fox theme for the hero, the only question is whether the new hero will be Asa herself or her daughte, who has just received a new weapon from her father. I am betting on the daughter, and I’m betting that she is secretly a part of these town rebels who are fighting the Hashimoto gang. Tonight, her mother will discover this.

Alright buckle up because this might be long. So on the new map (which is located next to Hanamura, as we can see Hanamura up in the skybox), there are multiple hints at potential other clans. In the Dev Update, Jeff said this map is “filled with lots of contextual hints at upcoming OW2 lore and people that the Shimadas are interacting with”. He also said pay attention to the graffiti. Well, I scoured the entire map and was only able to find a singular piece of grafitti. What’s on it? A fox:

The word is “yokai” - a Japanese word for supernatural spirits, often with animal forms. The map also features many foxes, including one in the grafitti. According to yokai folklore, foxes have the ability to assume human form, and and both tricksters and messengers of the gods.

This caught my attention immediately because somewhere else in the map there are two prominent Fox statues in front of the big central building, as seen here:

So, this could be pointing at a different clan. The Shimadas are the Dragons, and this would be the Foxes. And then my good friend Cerberus reminded me of something Game Informer said about an upcoming OW2 hero…who has a fox pet…and shruiken weapon:

“The hero that stood out the most, and I couldn’t take my eyes off of, appeared to be a female with short hair. At her side and standing up to her knees was a fuzzy little critter with pointy ears and an equally pointy tail. It looked like a fennec fox, but with longer ears and a more aggressive stance. The hero of note wielded a giant four-sided weapon, which is somewhat similar to the shuriken used by Yuffie in Final Fantasy VII, but much thicker. At first glance, this weapon looks like it’s used for melee purposes, but given Overwatch is a science-fiction universe, I wouldn’t rule out the possibility of it being thrown like a boomerang or attached to some kind of chain (which I didn’t see). Regarding the animal, your guess is as good as mine whether it will be on the battlefield or not. There’s a chance it could be summoned in like Bob for an Ultimate, or not be used at all like Bastion’s bird Ganymede. Given how prominent it was in this artwork, I get the feeling this animal is used in some way. Imagine being able to tell it who to attack or pin down just by aiming at the foe. Again, this is all speculation, but from the silhouette alone, this looks to be one of the wildest heroes for the game yet.”

A shruiken-esque weapon? A Fox pet? I may be crazy but I think that’s a pretty clear connection to the new Japanese map with multiple Fox decals represented over it.

Another interesting thing Cerberus noted, is that the Fox statues have ties to Inari, A Japanese deity of foxes who uses them as their messenger. As you can see, the fox statues on the map are holding parchment scrolls in their mouths. Inari is also apparently adrongynous and can appear male or female depending on their mood, which fits with a seemingly female hero with super short hair.

So that’s my current drawn out theory on the upcoming hero that GameInformer wrote about.

Also, another clan maybe be the Tiger Clan, another Chinese Zodiac Animal. In the official Tweet announcing the new map, it describes “A Seedy Nightclub”. In this Nightclub, there is a large neon symbol of a Tiger’s head. The Tiger is connected to the Earth, and the Dragons are connected to the Heavens. This is paralleled by their in-game locations: The Hanamura Castle is up in the sky on the mountain above this new map, and the Tiger Nightclub is down below. This could be yet another clan/mafia that the Shimadas are dealing with.

The last detail I noticed was the Shimada Clan symbol was engraved on every sewer grate covering.

gotta bump this for traction

gotta bump this for traction 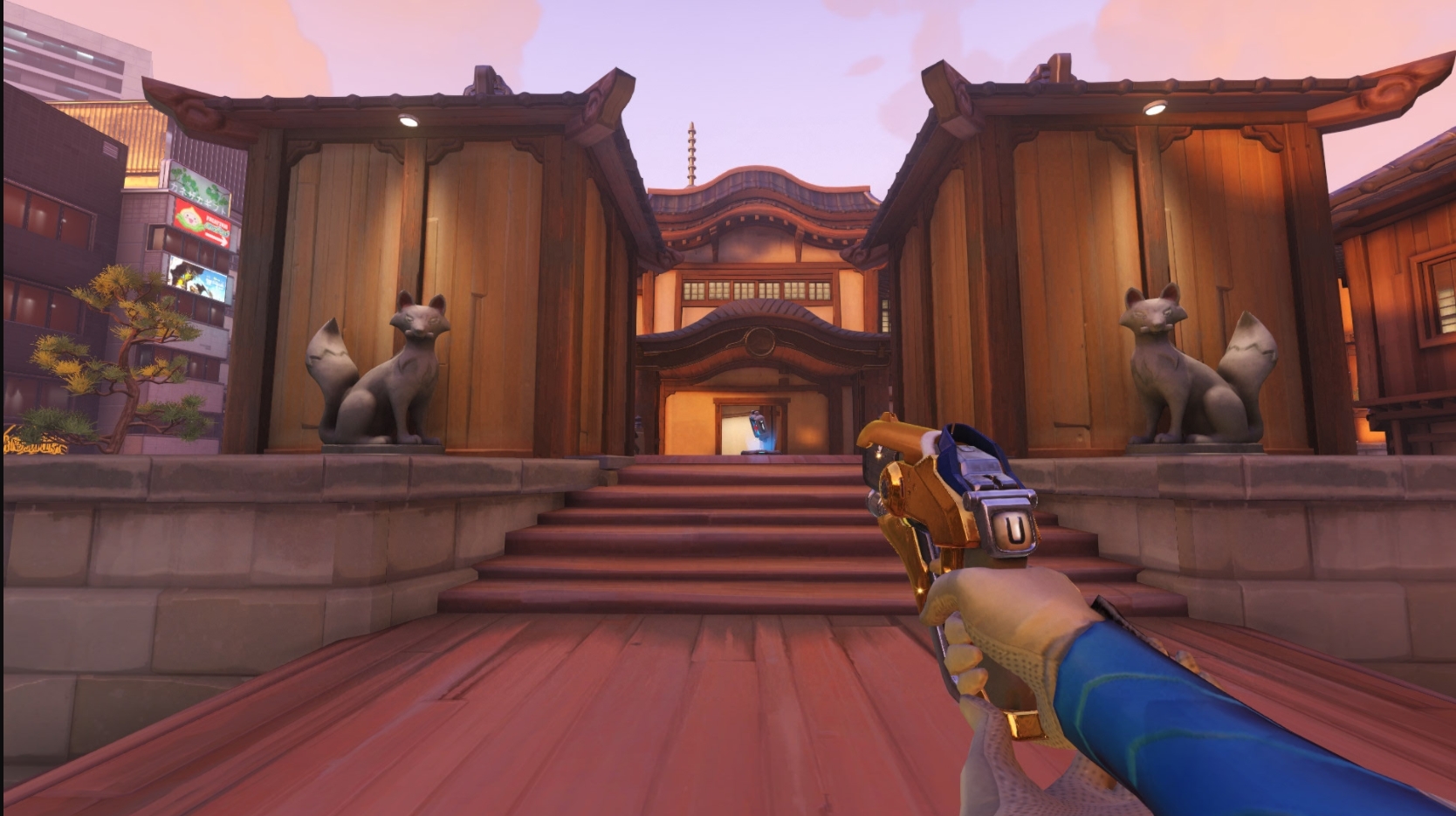 Im pretty sure it was confirmed there had been silhouettes shown at blizzcon [dont quote me i dunno if this is 100%] and one silhouette showed an animal like creature and a person.

Edit: NVM YOU SAID THAT

My face as I read this bit

Im pretty sure it was confirmed there had been silhouettes shown at blizzcon [dont quote me i dunno if this is 100%] and one silhouette showed an animal like creature and a person.

Edit: NVM YOU SAID THAT

My face as I read this bit

ahaha I was shook when I remembered lol

I would main a floof instantly.

I would main a floof instantly.

Better yet you can have a golden pet.

I wonder if it’d be metallic, or purely animal, or maybe a hybrid animal-robot like Genji is?

Weren’t the silhouettes debunked though as being outlines of existing characters from other games? And that the screenshot that went around was possibly faked? Or am I imagining that?

Weren’t the silhouettes debunked though as being outlines of existing characters from other games?

Nope. There was no actual image posted by GameInformer, some rando made their own “mockup” image of the silhouettes and those are just taken from other games, like the hunched staff guy is just WoW’s Gul’Dan

But the GameInformer team actually DID get an interview with Jeff Kaplan himself after Blizzcon and were shown real hero silhouettes and the paragraph I quoted is one they say, here’s the full article:

So, article is real, image was not official

Weren’t the silhouettes debunked though as being outlines of existing characters from other games?

The screenshot was faked most likely based off the descriptipn given by game informer, game imformer never provided an image only a description of 2 characters they noticed

Oh okay, cool.
Thanks for clarifying.

I swear I watched a video about it, must’ve confused the details lol

Yeah OW youtubers took the image and ran with it lol, it confused a lot of people

As they always do.

Anything for the traction, respect the grind ig