great buff for 2017. with moira and bridget in the game, any healer with projectiles is not viable.

It’s super handy for those of us who want to play Ana and have her work more effectively than she already does.

Sure, Moira and Brigitte may be better but I have a lot of love and passion for Ana - so I’m pleased about this 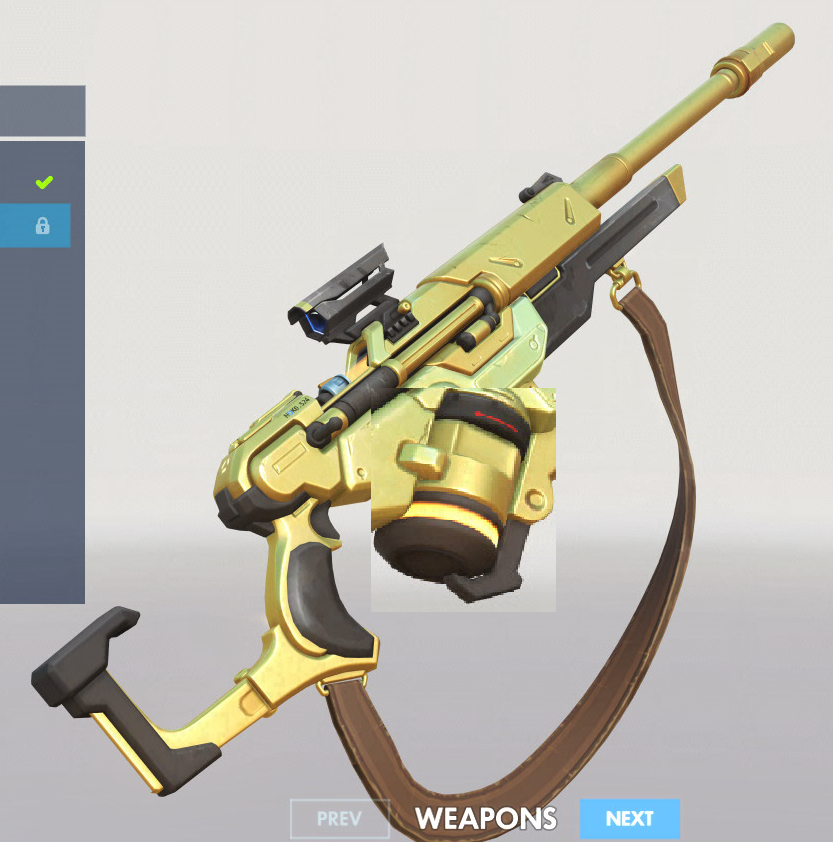 MS paint trashpost aside, I don’t think this will be enough, and isn’t the direction I’d take but it is a welcome change. Are the cooldowns being looked at?

Thanks for the update! I do have a small concern however. Even though 4 more extra shots is nice, Ana’s main problems IMO are her low survivability, no mobility for a sniper, and no self-sustain. Compared to Mercy or Moira, who have amazing sustain and mobility with consistent healing on top of it.

However I really don’t know how this will play out so I’ll wait and see. Once again, thanks for the update!

It would be nice to see a second or two shaved off her sleep dart CD, don’t think they’d need to touch her mobility if this was slightly more reliable.

Don’t really see whats the deal with these changes ? as in, how will it really affect her gameplay and more importantly her utility. Nano might get a faster build up time since more shots allows it, but its still a very limited ult

What ana needs is the possibility of healing by actually following the action through shields, like mercy’s and zen’s heals. Now there’s also the fact that mercy’s link is broken in terms of LoS check (going through boxes / walls etc) but that’s for another day

Thanks for the update! I do have a small concern however. Even though 4 more extra shots is nice, Ana’s main problems IMO are her low survivability, no mobility for a sniper, and no self-sustain. Compared to Mercy or Moira, who have amazing sustain and mobility with consistent healing on top of it.

However I really don’t know how this will play out so I’ll wait and see. Once again, thanks for the update!

I think its worth talking a little about our balance philosophy here. People often will post things such as “why doesn’t Blizzard see that this hero has X as a weakness and that is what should be fixed.”

One aspect of our heroes that is very important is that they all have various strengths and weaknesses. This is a core aspect of what makes teamplay so important in Overwatch. If you have an Ana on your team, this gives you certain advantages such as being able to be healed from very long range, having a more offensive-favored ultimate, and having the ability to disable healing on enemies (which can be especially vital against heroes that really rely on healing such as Roadhog). That said, she also brings her own weaknesses that must be managed, such as low mobility and lower self-healing. A team may opt to run Brigitte or Lucio with Ana to help peel attackers off of her, for example.

When we want to buff a hero, sometimes it can be the right call reduce these weaknesses. For example, if a weakness is just too overbearing or a hero just has too many weaknesses compared to their strengths. But more often we would rather amplify a heroes strengths and make the hero just better at what they do, which leaves their weaknesses still around for enemies to exploit and for allies to try to manage.

I hope this helps explain how we look at balance issues and heroes in Overwatch in general.

156 Likes
Why do people think the Ana change wont do much?
Good start for Ana; Healing passive next?
So ana finally got buffed
Ana's buff isn't enough
Balancing Makes Sense and We Need to think like the devs
I think I disagree with the balance philosophy
Will I Ever Get to Use Ana as She Was Effectively Designed to Be Used?
Give mcree a horse
Ana self grenade usage
You didn’t fix any of anas major problems
Maybe Ana should be an off support?
Allow ANA to TRIGGER her GRENADE
Something is bothering me a little bit
Post REASONABLE buff/nerfs for heroes and why
Support Mobility/Evading Talk
Ana is the only support without self heal
Ana doesn't just have low self heal. She has NONE
My main problem with Hanzo isnt even Storm Arrow
What does Ana need?
So when should we expect a good ana buff
Ana - is Blizzard trolling us?
Are Ana mains demanding more Buffs getting greedy?
Ana is literally unplayable
Should hack cancel storm arrow?
Should hack cancel storm arrow?
Should hack cancel storm arrow?
What would you give up to give Ana self-healing?
Ana: Ghillie Suit Passive
Zenyatta's Critical hit box needs a fix
What will it take to make Ana a good pick again?
They ruined Ana
Blizzard thinking of Nerfing Hanzos Ult
Ana Buff Idea (feel free to suggest your own!)
Does Ana need buff(s)?
Ana's inconsistency isn't because of having to aim
Possible Ana rework in the near future
Ana buff idea: "cooking" the nade
Why can't Ana self-heal?
The homogenization of play styles
Why Do You Have A Backbone For The Wrong Reasons? [MEGA-THREAD] (Updated 7/20/18)
Lunge contradicts Blizzards statements on hero balance
Analysis of self-sustain and mobility
Ana self heal Passive ability idea
My observations, opinions, and thoughts on multiple things related to Overwatch
People that blame Ana players should feel ashamed
Ana unfair 80 dmg nerf + QOL changes
[Feedback Thread Continued Part III] Mercy Updates - Jan 30, 2018
I knew it, Ana is their next target
Mercy is the perfect support
Ana needs a movement ability
Ana needs some sort of self-heal
Ana needs more weaknesses
Ana and Lucio need adjustments
:stop_sign: Bastion is being forgotten (370+ likes, 5000 responses)
Dear lord Wrecking Ball is annoying
Hanzo The Perfect Hero? Check
Suggesting a change to hanzo
Ana buff: secondary weapon idea
What is Ana's niche supposed to be?
The Answer to Brigitte
KillerQueen-11578 4 May 2018 03:39 #30

Would it be possible to reduce Ana’s Sleep Dart cooldown, maybe 11 or 10 seconds? I mean, it’s not that easy to land and it won’t hurt much for the meta to have a tad bit survivability that solely depends on the player’s accuracy and/or timing.

Honestly a self heal similar to Mercy’s would be amazing. Not having to constantly waste your nade on yourself after taking poke damage, which makes you a free Tracer or Genji kill.

I don’t think you can ignore the Quick Play aspect of Overwatch, it’s just as much of the game as Top 500 games or Overwatch League games are. Even moreso actually. Running 1 healer or simply not having any way of recovering health feels bad to play.

I like Overwatch as a team game yes, but I would like every character to feel self-sufficient. Be able to survive alone, and thrive together. But with Ana right now if feels difficult to even survive by yourself based off her current kit. You NEED that 2nd support to heal you back up. The other supports do not, but they do thrive if they do. If that makes any sense at all.

Love the Ana changes. Would also love if you let her biotic grenade pass through full HP teammates as well

Why is it then, that heroes like Mercy and Moira who have more mobility, higher self healing, and more often have higher healing overall are still able to be super strong, or able to play around their weakness easier

This doesn’t make her stronger in 1v1 situations, when being dove, or when fighting off flankers

BUT it does keep her safer from chip damage, and in big cluster teamfights

While Ana can heal from distance; Zen, Mercy, and Brigitte all have tools to do the same job easier.

We don’t want Ana to be a must pick; we just want her to be on equal footing as Mercy and Moira. Right now, even with these buffs, there’s still little reason to bring Ana when Moira and Mercy’s utility is always available for the TEAM

Geoff, please just sticky this on the front page. This would answer like 90% of people’s questions/complaints (if they read it, that is…) and explain to them why you guys aren’t rushing in with the nerf/buff hammer.

Make Ana a more effective healer and feel rewarding to play without erasing the weaknesses that makes playing her feel unique and challenging!

I wish more people understood this, characters don’t have to excel in every situation. I personally think a player who can get out of a precarious situation shows how skillful they are. Like a Zenyatta being leaped on by Winston and killing it in a fight.

Thank you very much for explaining your philosophy of balancing to us!

This leads me onto a question though.

When you mentioned about making them better at what they do, could we potentially see her healing pierce through enemy shields? In order to compensate the fact that her healing relies on aim, if you’re missing a couple of shots and then have a shield dropped in front of your face then your ability to heal drops.

Also, could we see an adjustment option for her “forgiveness” area when scoped? (I’m not 100% sure on its name, but the small triangular area which also heals if an ally is in there, but not an enemy) Cause I’ve been close to picking off a pesky Widowmaker or Pharah several times only for someone to clip into the edge of that triangle and take a healing shot, allowing the enemy to escape.

They are strong in the mobility and healing but don’t have the heal denial, cc, range and offensive ult support that Ana has. You’re blatantly leaving out the tools that separate her character from the others. Again equal footing shouldn’t be making them all the same.

You mean like taking chip damage across the map and now knowing if you were playing ANY other support you’d be okay, but now you have to leave to find a health pack, run off to your other support, or burn your best ability

Could play Mercy and heal more, and have res and a more team orientated ult that also makes you stronger

Or how about Moira? Not only is fade half the cooldown of Sleep Dart, she has TWO ways to make sure she has full health

I think adding an option in the “Controls” menu for how big of hitboxes you want your allies to have should be an option, with how it is now at 100%, and regular hitboxes for allies at 0%, which would raise the skill cap of the hero but also allow you to be more offensive if that is your type of style.