Tracer is litterally unfair to play against

i’ve been in this community for 5 years (almost 6) and probably have a right to adress this issue now, all of the matches i had against tracer have ended in a painfull loss or a win that didnt even feel moderately aight. Her counters dont work, can lead varian to her tower, brightwing is kinda okay with polymorph but still tracer can easily pick her and leave without getting touched, i think that her cooldowns shall be lowered, for a hero thats “skill requirement” is considered very high she merely has any punishments for stepping out of her safe zone. Her health isnt low enough, too much mobility that we cant even hit a single thing and before you say Oh BuT pOiNt AnD cLiCk StUnS, when paired with a teammate that can support her (zarya,abathur,any healer in the game) uther cant do jackstuff against her. JUST PLEASE NERF HER AT THIS POINT LOWER HER HEALTH AND MAYBE REDUCE HER TENACITY we have enough heroes that we must ban already her counters dont work just please think about it for a minute. Its hard enough to stop her, at least let us stop her when we catch her twice or smthn.

Someone is complaining about the post-lobotomy^Wrework tracer. Now I have seen everything.

Her counters dont work, can lead varian to her tower, brightwing is kinda okay with polymorph but still tracer can easily pick her and leave without getting touched

Sorry. I’m a Tracer main, and counters work just fine. She even gets countered by some of the mages.

Tracer has so many counters, I can’t see how anyone could complain about the hero. And if I ever tried to randomly dive a Bright Wing, I am dead.

Tracer is a diver/ganker. If you push your luck against those heroes, you die a lot. Same result you would get against a Valeera, Zera or Nova.

You seem to be saying that your wins against Tracer don’t count. Why is that?
(But you play Nova AND Zeratul, so you can’t really complain about gankers)

well she definetly pain in the neck, BUT ONLY if ur team lets her freely do her job. Any aa gives her alot of trouble, and if ur team has some kind of valeera, tracer becomes helpless

So I just checked, and you played a game as Zeratl against Tracer.

You were up against Nova, Tracer, Butcher, Chen, and Greymane, without a tank. So you were at a disadvantage. It’s not specifically Tracer that does this.

HOWEVER. Zeratul does eat Tracer for lunch, but not with Q build, which is what you picked here.

And That Tracer picked the absolute worse build ever.
Also note that Ming did not pick “Calamity” or “Diamond Skin” agianst that team, and went glass cannon. Tychus went “Master assassin” plus “That’s the stuff” (wtf)
And it looks like you specifically seem to always pick Q build.

In order to maximize Q build on Zera, you need opportunities to go in the middle of the enemy team and Q several targets. Against a team of divers, it’s suicide. Your team picked horrible talents considering what you were playing against.

No matter what Tracer does, she can’t escape Vorpal blade. So Q build is not what scares her. You want to be AA.

This is a L2P issue.
(Though against a Tychus, Chen didn’t pick “Elusive brawler”, so bad picks were made on both sides.)

Pick Varian or any other cc hero and laugh about Tracer. Dive heroes like Zeratul or Genji works also.

you played a game as Zeratl against Tracer.

That’s not him. His name is all in capital letters. 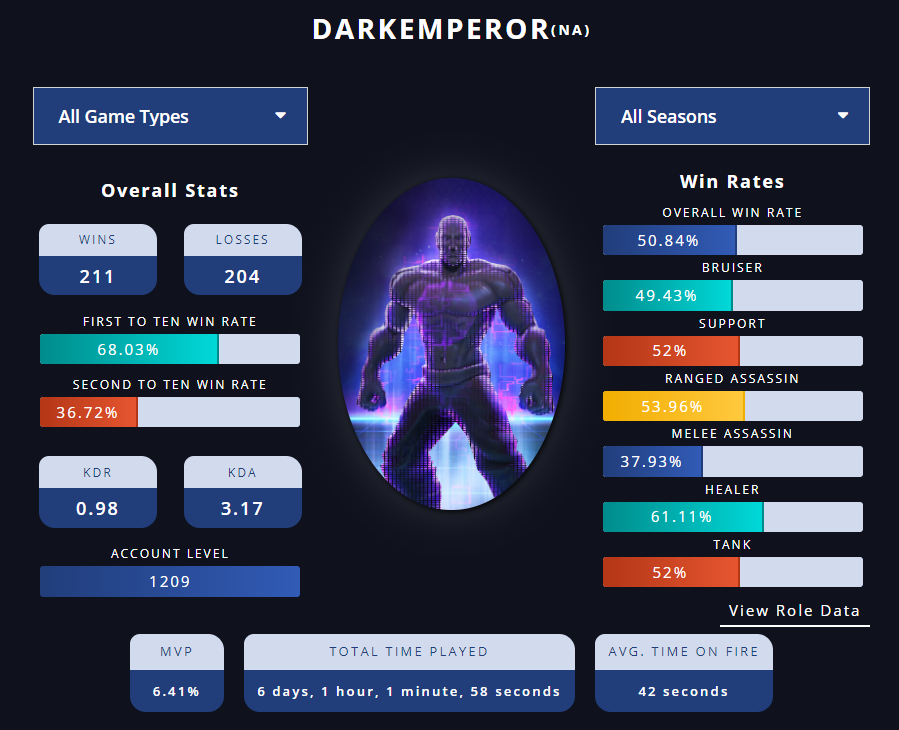 He completely destroys her. Vorpal is one of the things that recall doesn’t cleanse. And his damage on your puny health bar is scary.

No. The names are always in capital letter in their main page, but not elsewhere.

He completely destroys her.

Indeed. He also should always (most of the time) have the advantage of 1st attack, because he has stealth.

Oh, my bad. I thought the names were sorted chronologically, but they are sorted by number of games played for some reason.

Though I don’t see Tracer in his last 5 games, which are quite spaced out. Or even in the last 10. But maybe they haven’t been uploaded.

If you dont want to lose vs tracer take taunt varian or frost armor jaina and make him a minion. Simple. Some heroes are better against tracer than others.

[This doesn’t work in a 4 potatoe team, of course]

The pros find the current tracer being OP

Pick Raynor and 2) right-click her. Done…

This was more fun with the old raynor… e

People wont be happy until Tracer cant solo a single minion. Seriously though. There are plenty of ways to counter her both individual play and team play. Cant just keep nerfing heroes because they stomp you every game. You need to adapt yourself to changes and think of ways to beat her.

If you get rolled by a Tracer at this point, you should just play League of Legends. I won’t even pick her until the ADC reworks that just happened are nerfed. She is already the weakest ranged hero in the game right now because she’s been repeatedly hit with massive nerfs.

Classic case of a newbie thinking a hero is OP. Making a topic then dissapearing.

She’s not OP or anything, but to make this comment that it’d be so crazy to get rolled by Tracer, one of the top heroes and calling her the weakest ranged hero in the game is utterly bizarre.

Why are all of your takes so consistently bad?

Tracer is extremely easy to bully when silenced, she becomes a princess in distress.

Can’t land a silence on her? Use point and click silences.

one of the top heroes and calling her the weakest ranged hero in the game is utterly bizarre.

Well Tracer has the lowest healthbar in the game, except Murky. Her main damage comes from AA’s on midrange level. That alone makes her rather hard to get into, so I wouldn’t be surprised if someone calls her “the weakest hero”, because her impact is low, if you’re not experienced.

But in hands of a good player she is incredible powerful and annoying af. So my bet goes into that Eninya is obviously not a Tracer player.