Blizz can you lower the losing death stacks from butcher

from 15 to 10? 20 is too much for an already underpowered character

im one of those wood players maining butcher an F tier character and love playing him but i’ve to admit he is not the strongest among the melee assasins not even stacked.

He is okey when is a real hero (when fully stacked), the only problem is this losing stacks on death mechanic is too high and much punishment not only for the character but for the teammates of the butcher, he would never be op in meta even with more buffs, but lowering his losing stacking would be a great change of quality of life for the butcher player, allowing him to play with more with the team, instead of 1. playing very safe and avoiding dying (this can be interpreted like not participate in TF) or 2. Dying and dying, and getting stacked 1 min before ur core is destroyed, or never be stacked = fully hero

he is not op because, 1 his single burst damage is very good, and thats all, he lacks of mobility and his self healing limited, his kit of talent and skills damage is quite low to average only with a valuable point’n click stun, yes he has a very high auto attack, but u need to be in melee and is only against just one, so even when stacked ur not the best among other dps… and starting the game with a nerfed baby version of ur hero that needs to be carried leads to other players to think wrong about butcher… and it is aggravated every time he dies and losing stack/dmg…

so it will be much appreciated if you blizz think twice about him analyzing that he is not even a great deal at this moment when the amount of CC in this game is astronomical, and reducing his losing stack by a half, or like u did with zuljing allowing him to stacking faster with a talent, just give a little love to butcher making him stacking a little pain for the butcher

from 20 to 10? 20 is too much for an already underpowered character

Butch is a poorly designed hero. Imo, he needs to be redone from the ground up.

Butch is a poorly designed hero. Imo, he needs to be redone from the ground up.

Well, I don’t know what you mean exactly with a poorly designed hero, I’m a diablo 2 & 3 player and the butcher in the game is not very different from the one seen in the game, he’s just a demon with an ultra-powerful auto attack, slow and clumsy but with a powerful charge and lifesteal, I don’t think his skills are bad, nor good, they are okay, his trait is the one that stresses me a bit since the fact of losing damage with each death makes his style of play a punishment for each death, which I do not quite understand since the character is not a big deal, and im fine with that, i dont want care playing with a OP character, i just like him because i liked him in d3 and d2

Butcher’s winrates are in a very healthy spot in SL, and maybe even a tad high in QM where he has the 11th spot. If you are dying a lot before getting stacked that is on you. The great challenge of all melee assassins is knowing when to go in, and when not to do so. I agree with Vailnite that his current design is suboptimal.

You guys are 3 years late on this request tho, there’s no way anything like that will happen now

You guys are 3 years late on this request tho, there’s no way anything like that will happen now

no, zuljin is another stacked hero that he needed to spent a lot of time stacking in the game (without losing stacks on dead), yet, he got a reworked talent (Recklessness) that allows him to gain double stacking, so it shouldn’t be a great deal tweaking butcher trait to lose less meat for dead or reworking a talent that allow him to stack faster

Thus I feel lessening his lost meat could help. This could also help stop players taking big risks to recover their lost meat.

In exchange for carrying him early game, he is expected to repay the team late game, but often fails to fulfill this promise… The reason: he failed to gain stacks early enough to make a difference, OR because the game is really over at that point and his team has won.

In ether case, the Butcher player would have been better off playing as any other hero (he’s a snowballing “win more” hero).

In exchange for carrying him early game, he is expected to repay the team late game,

ok i wont say that u said is wrong… but its not completly true, i dont think he is a poorly desinged hero… he is just the way as it is the lore of diablo world, i dont think he is an hypercarry, except in vs IA or againts bronzes, his big flaw and his most distinctive feature is his trait, wich i like the stacking damage quest, but amount of meat losing is too high for an average hero.
yes he can fail to get stacks even if the butcher is good, but win with him is not that hard…I win more games than I lose, just because in order to the butcher to win you need 3 things to happen:

but if he gets some way like zuljin to stack faster or losing less meat, this would help to reduce the impact of a “poorly hero desing”

Butchers issues go beyond his stacks. His E is particularly bad. As i once said

Leroy Jenkin’s E is called I AM THE TEAM!
grabs mega phone ATTENTION VIDEO GAME ENTHUSIASTS, WE WILL BEGIN FISTICUFFS SHORTLY! PLEASE HAVE YOUR CROWD CONTROL, SHIELDS, BURST HEALS AND MOBILITY AT THE READY! I LOOK FORWARD TO EVERYONE HAVING A PLEASANT TIME BUT ME!

Almost every other diver doesn’t give nearly as much of a warning and many of them also have a plan of escape. His over reliance on auto attacks also make him easier to peel then a sonya or hogger would be.

from 20 to 10? 20 is too much for an already underpowered character

How about we meet halfway and he loses 15?

Almost every other diver doesn’t give nearly as much of a warning and many of them also have a plan of escape. His over reliance on auto attacks also make him easier to peel then a sonya or hogger would be.

do you mean his Ruthless Onslaught ( Charge at an enemy, becoming Unstoppable and stuning for 1 second) is particularly bad? lol i dont think his E is bad, in fact i think is one of the best skills he has, his point and click CC like a homing missile is great in most cases… te Butcher E make him even better than stitches that has NO stuns… so no, i think is Q could do more dmg and slow more, and i would love that his W grants movspeed at baseline

How about we meet halfway and he loses 15?

Actually no. I would rather get a new hero instead.

Sure The Butcher might be problematic, but compare him to the heroes, who got reworked: D.Va, Gazlowe or Tassardar and Butcher’s popularity is higher than this heroes (it’s in the middle ground). Before reworking heroes I would take popularity into consideration to not mispleased customers as they did with Tassadar and old Tass was less popular than The Butcher.

And since Hots is currently in a bad spot I wouldn’t want to waste ressources for questionable demands like this. We don’t need to make more people quit, because their favorite hero is reworked. And TheButcher made a good point that the current version is comparable to his design in Diablo.

I am absolutely fine with feast or femine design, because not every hero needs to be a generalist and Hots is all about different playstyles.

The group and I can play The Butcher fine. We comp in a way that The Butcher can double soak while the 4 man Gank and invade camps. Of course it’s the vegan build, but It’s a stacked Butcher by lvl 14 guaranteed.

The enemy is so busy with the rest of us that The Butcher never gets ganked themselves. That build’s also excellent for him to solo-camp.

I love butcher, but this is one of those situational heaors that can bring next to 0 value or steamroll the enemy team.
Limit max meat to 200-250 and reduce meat lost on death to 10-15 that would adress both issues.

E is great for catching people out of position but can be hard to use when the whole team is around and ready for you to charge it and it lacks the flexibility to do anything else.

Forgive me for bringing up league but I think it would be cool if it worked more like Sion’s ult. 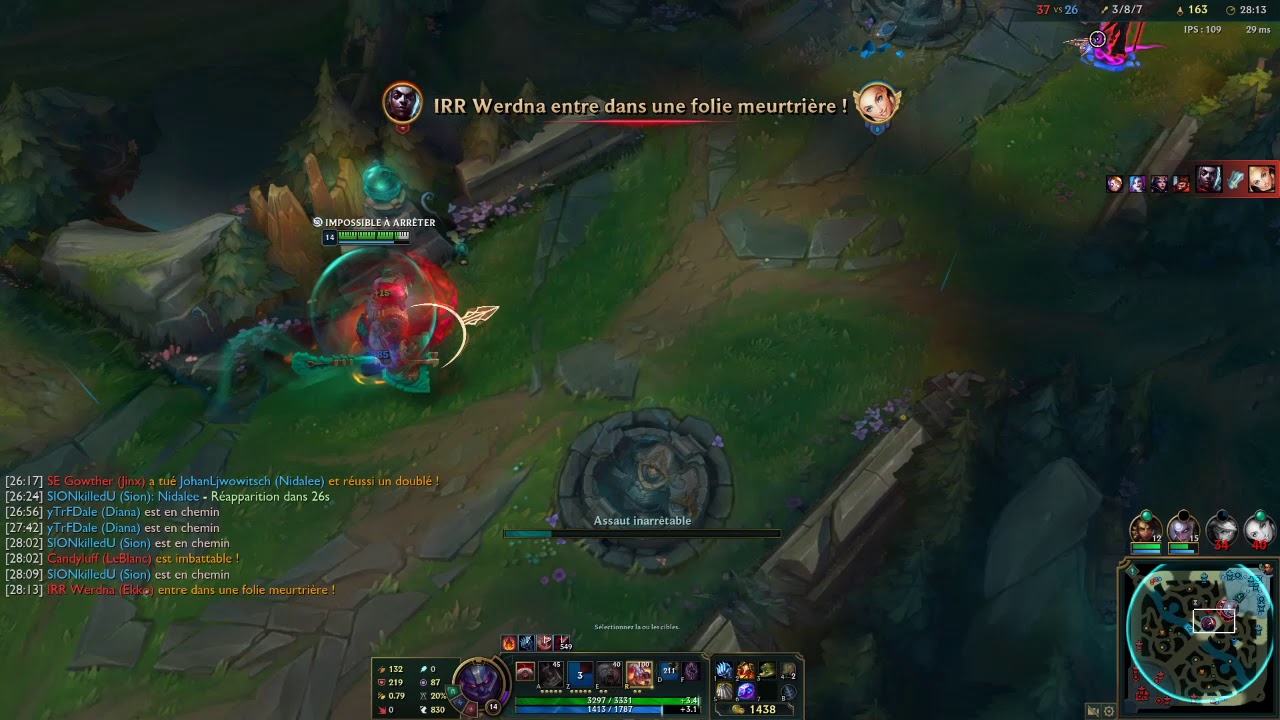 Sion charges in a direction, ramping up speed over time. He can steer his charge slightly with the mouse cursor location. When he collides with an enemy he deals damage and knocks them up based on the distance he has charged.

well i wouldnt like a rework for butcher… i like how he is… also a rework would make him OP, i dont want to him to be OP because everyone will start to playing and baning him and it would be annoying for us mains butchers lol

lol well is not a big “demand” not asking for a rework, just a few lines of codes making him losing less meat and we happy

this is the dream

Sion charges in a direction, ramping up speed over time. He can steer his charge slightly with the mouse cursor

Well, he already only loses 15 stacks on death, so just a talent rework it is.

Maybe not make it as strong as an ult, but its a pretty fun ability.

I also think butcher could use a rework but not to drastic of one. The stacks should stay, the ults should stay but buff furnace blast, and address how easily he can be countered. I just wish he was a bit less extreme with his sink or swim style.

If you chain mephisto while hes doing his in and out thing, hell snap back to the place where you chained him. Its funny and an easy kill.