Tips needed for guff's A party of Adventurers

Trying to beat the " A party of Adventurers" boss, but she is OP.
Anyone has any tips beside raging and giving up

Ive tried over a dozen times with each hero power. she has too many counters, we have too few removals (which really doesnt do anything since the board is filled the next turn) I’m still trying but It seems this fight is a bit unbalanced. Still trying to find the secret formula, but it looks like it will ve overly rng based unfortunately. And I know this is an rng game, but its like trying to pull the ace of spades out of a deck of cards on your first try…

Thank you for reply. I found one youtube link but i see that player had so much luck. 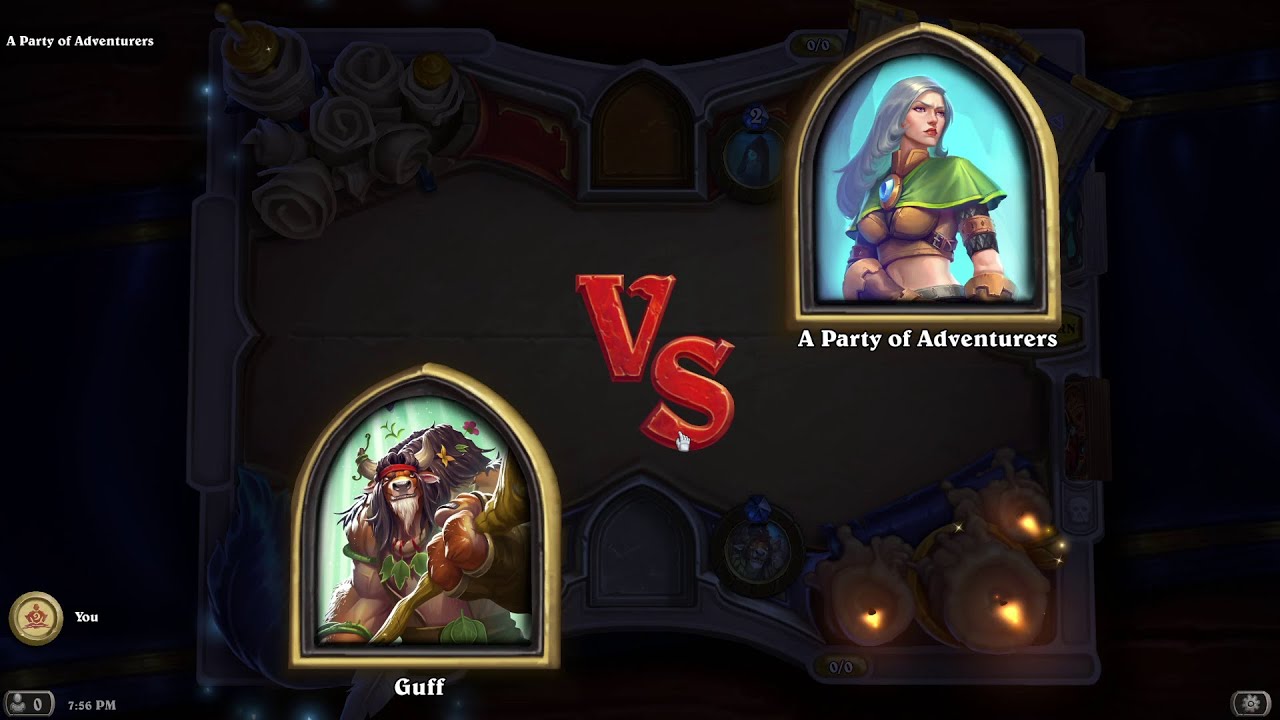 Just got this sob haha. use your little freezing minions hero power to keep his big boys under control

Finnaly managed a win. Ty all for the tips.

This is the most insane solo thing I’ve seen in years. She floods the board with 2/2s with potent effects and has several removal cards, while Guff is just a hacked together Druid deck without a win condition. You can put down plenty of 5 cost beasts to be killed instantly, though

This fight is really stupid guys.

I agree with you EricDaMidget. She was the only boss i had problems with. The rest of other bosses was one battle with win. Glad i am done with all of them.

My trick was: keep the starting hand and take the 2 damage Hero Power so you have a guaranteed way to deal with a Poisonous Adventurer. Turn 1 go for Bloom + Growth, turn 3 you use your Hero Power to take down an Adventurer and summon the 2/3 that will give you 5 armor since you’re guaranteed to draw the Totem card. Then just carefully keep controlling the field. Play Lake Thresher ASAP when it can survive (don’t bother trying to lure out Assassinate, if it gets used vs Lake Thresher then too bad, it’s still in your favor).

Turn 1 go for Bloom + Growth, turn 3 you use your Hero Power to take down an Adventurer and summon the 2/3 that will give you 5 armor since you’re guaranteed to draw the Totem card

This is incorrect. You are not always guaranteed to draw the totem card.

Ah, I had 2 battles where I drew it at the same time, and with how much they like to rig draws in these Book adventures and how they put that card in your starting hand, I thought that was the intention.

Any way, it doesn’t matter. 5 armor doesn’t make a difference this battle, it’s more important for its ability to battle 2 Adventurers.

Bru’kan is da troll. I got lucky with a lot of armor built up. Then I just used Bru’kan to burn face for the win.

the next boss is way worse.
boss has all free poison minions,
you get completely useless and expensive cards. no removal at all.

literally played the 8 mana summon a beast and did nothing.

hahahah i thougth she had three till i noticed the middle one was a big necklace.

This fight is a failure in terms of game design, juste like many of the adventures : they are meant to be played on hard-way learning curve : get to know your deck, your opponent, lose 1st, lose 2nd, win 3rd… which only brings frustration, especially since they removed the “try again button”

anyway, this one is troublesome because it only relies on luck : i did it 5 times, won on 5th i got an average rate of 50% poisonous hero… who are gamebreakers, i admit, i was very unlucky… still this is a design falw, the basic deck is meant to outtempo the adventurers… unless… you get a hard removal, or a poisonous minion falling stars sisn’t an option. and the hero power isn’t something to rely on. most other heroes were either taunts, rush, or divine shield

i lost 2 games because 2 guardian animals were in the 8 last cards, you can win without, but seriously alter your chances if you do. the initial deck doesn’t make sense : draw animals to get armor… irrevelant with gaurdian animals the innervates and +2 mana overcharge ( dunno the english name ) often puts you in a game loss if your opponent reacts with a hard removal / poisonous

one good thing : the AI is stupid enough to target the batrodon ( cleaving creature
) with hysteria… and this move if often a game-win unless you target the leftmost poisonous first … which happened 2 times for me… i said it, i’ve been very unlucky… i think.

they cannot make this fight easier except by changing the % occurence of poisonous adventurers. it’s a purge, boring game, to start again and again untill you get lucky enough… which obvisouly shows you how to play the game well.

If you think this is insane, look at Mutanus two fights later who plays a Murloc Deck where every Murloc he has get +2/+2 and you have no mass removal.

The best strat I have found is to take the hero ability that deals 2 damage and adds spell damage +1 when used.

Let a party of adventurers keep the minion that is 0/2 out in play hoepfully she does this during turn 2, so that she will continue to draw 2 cost minions and fill her hand with those. In turn it will start burning out her deck of more dangerous and harder to deal with cards.

I feel this is partially intended. What is Guff, but a mentally challenged druid?