Hi just want to say that I am really disappointed by the evolution od the game. I play Hearthstone from grand tournament expansion and I loved the game… I havent spent so much time in any other game. I loved it because you were free to build your own decks and were able to win with it because of your strategy thinking. Today you win by random effects and stealing cards, mana costs and mana from your oponents deck, hand or board. What Is the point? Where Is the strategy when you dont even know what your cards will do or steal? I know that rng was always big in HS but now Its nothing else. It is shame, i really loved this game.

Where Is the strategy when you dont even know what your cards will do or steal?

The strategy is just to give the company money. Any benefit to customers is incidental.

The only winning move is not to pay until those responsible are replaced by people who will reverse this trend.

This game has become fancy bells and whistles. The “random” rewarded cards and targets (especially with thief rogue) seem less than so. They’ve already proven they can sculpt a perfect card for any situation with Zephrys, so a lot of “random” situations are tailored to help the player stay around a 50% win rate. This can be altered slightly and push you ahead to 60% if you’re familiar with the meta and make smarter plays.

Hearthstone has become a literal slot machine. Pretty sounds/animations while it keeps you floating without much gain. Their income is increased time played and money spent by whales.

The only winning move is not to pay until those responsible are replaced by people who will reverse this trend.

you haven’t dusted this one off in a while. I completed my “boreas ignores the op’s point entirely to praise the company” bingo card and can start another one.

I should add one for “massive run on sentence.”

“random//discover” aren’t exactly random…they give the player a tool to snowball the game, nothing op or weak usually

The “random” rewarded cards and targets (especially with thief rogue) seem less than so.

Yep. It’s the same problem as the “random” 5 drop pool for Jandice Barov to summon, but worse. And then they have Swiftscale Trickster to cheat insane amounts of mana. This is especially important if they discover a board clear early against aggro, as they can just keep replaying it with Contraband Stash and Tess (which can itself be shadowstepped).

The only way to counter this card is with the Objection secret and they can play around that. Ice Trap is useless because the 0 cost spell from Trickster technically didn’t cast, so it keeps the mana discount.

Getting real tired of rogue gambling decks just pulling nothing but unbelievable cards. It seems random but they just overpowered the card pools. Between Rogue and Wild Seed I think blizzard just doesn’t understand their own mechanics for randomness not being a downside if every choice is stacked. 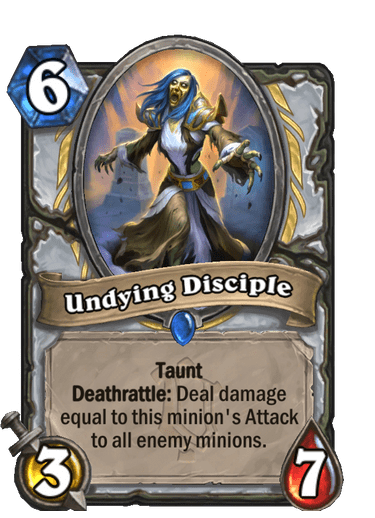 But to be fair, I’ve played against plenty of Rogues who have whiffed on their random discovers too

Matchmaking is very rigged. I had proof. I was recording gameplay on phone and wanted to make a screenshot but i didnt do right and i shut down screen so the recording stopped. But i played warlock wild with the 6 mana minion that fill each players board with 1/1 minions. We reached 10 mana. So i used the warlock card that discover a deathrattle minion that died this game (i choose the selfish that let opponent draw 2 cards when the minion get killed. It was my only deathrattle minion that died) so all the 1/1 minions got the 2 card draw buff of the selfish. What you think that happened? Yes, my rogue opponent used the spell that return all minions to their owners hand. So my hand was full of 1/1 and the buff it got was lost. I won the game but uninstalled after.

I spend my hard earned dust on the card that let you choose a deathrattle that died. This card nearly never draw on the right time. Got the combo twice now, and twice a counter. In so many opponents i get these counter players. If i dont get a counter player then the combo dont draw. And when i have the combo i also have the counter.

This is ridiculous programming.
I wish more whales got a life so they dont spend all their money on this game that is their life. Then blizz have to change things for money.

And about the runestones, i dont see a price. But ppl get more selfcontrol with runestones. It is an extra step before buying. You cant just buy packs with phone. This time you first have to buy runestones. And yes i know the price. I am not a whale. But i have bought bundles before when the game was nice