Threads should be automatically locked after 6 months

I’d add, someone can only necro a thread if they’ve read every post in it.

It’s a good idea, but how would you suggest they prevent bypassing the requirement? All it would take is to grab the scroll bar and zip right to the bottom.

Well all your doing is bringing up old news anyway. If they haven’t changed it they probably don’t intend to. Bring on the D4 forums anyway because i have better things to do than reply to you all night. I don’t even play D3 anymore all im doing is defending where the D4 chat is.

The top players wont be here for d4 either. They already have rooms set up in things like discord as The Miss already told you. Heck the top 5 players are all in the same rooms and chats. But I cant expect you to know that as you said you no longer play.

But you are right. I have wasted enough time on this. But that is the point of this forum. A time waster when you have nothing else to do. It serves zero other purpose.

Im generally not here to argue. I never disagreed with you. All i said was that you shouldn’t be slating a forum for a game you supposedly play a lot on.

The same can be said for starting threads that are getting buried or pirated ASAP, if the OP poster is disliked. No matter the content.

Resolved tech support threads should be auto locked, I agree there.

That makes better sense than what I was envisioning. Thank you for clarifying.

Resolved tech support threads should be auto locked, I agree there

Not always just resolved. Some people post, a Tech replies, and the poster never comes back. Someone else nerco bumping 3 months later does not help. It also makes the Blues think it already has been dealt with - because Blue post.

The never ending disconnect threads are a pet peeve of mine. Yes, the internet is a crazy mess between you and the servers and tons of things can go wrong. That does not mean the same thing that was wrong last month is wrong again this month. I realize logical people know that, but sometimes the posters seem not to. I wish they were locked after each time the issue of the day settled down. Then people who had unique issues would make new posts and get proper attention.

They just need to turn on Skynet and hand off forum moderation to it.

I’ll try to remember searching this thread next year and necro it.

I’ll hold you to that. Let me mark it on the calendar.

Gotta say I agree. Forums arent even nearly as needed they were in the 90s, nor as popular. Kids like hype, all post-launch stuff on YouTube etc. Marketting is taking over and entertainment in general. Reddit is one too. Full of funny Memes and stuff.

Ive suggested it before devs should adopt social media & youtube communication. Its much more commercial.

If they really want feedback via Forums, they could do it via invitations or go figure.

I wonder when MS bought Bethesda its going down?

Instead of playing the necro you choose to necro the forum.

tsk, tsk. I am shocked! (grinning

Kind of trolling but in a less evil way.

Actually, I just noticed that it appears that the Blizzconline forums will do something similar. It appears that it may lock threads after 6 months. I could be wrong. and this is a very different forum topic area than what is here. 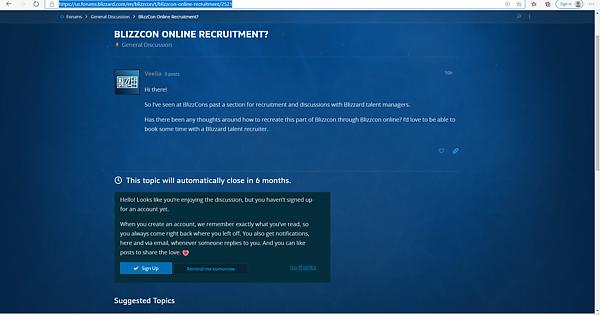 If I recall the Blizzcon forum covers all things Blizzcon and the threads all lock after 6 months. Similar to the V-ticket you can watch the event all you want for a few months after Blizzcon, but at some point they remove it. I forgot all about the Blizzcon forum, thank you for reminding me.

Actually, I just noticed that it appears that the Blizzconline forums will do something similar. It appears that it may lock threads after 6 months. I could be wrong.

You are not wrong. The forum software has the ability to auto lock all threads on a forum after a specific time. They can also set the auto lock per thread if they want so exceptions can be made. Sticky threads could be exempt. They can also use the setting to make a thread lock even though the others don’t. Say they were looking for feedback on a specific topic and wanted to close feedback after a week. They could have it lock.

The Lounge thread on WoW CS auto locks after a month to keep it from getting too long.

The assumption that forums are a dying medium is pretty preposterous.

Mechanically, I’d argue that places like here, reddit, facebook, and other social media are actually regressions in communication between the stripping of features older software had and pushing new schlock, sometimes in its place, that isn’t nearly as effective.

Discord is also not a substitute, as while it may lend itself to real-time communication, you’re unlikely to have people backscrolling through longer conversations. Things also not being available in web searches for quick reference is also a strike. Search features within Discord itself are something I’d call spotty at best, nevermind the continued inability to manage multiple accounts within a single instance of the program.

Memes and zingers do not make a community, no matter how much those with shorter attention spans might think otherwise. Any company that does not set up their own official site for communication, let alone make it priority, is failing to put their best foot forward. D3 has failed here for sure, but this also wouldn’t be the first time I’ve criticized their hands off approach to community.

the Blizzconline forums will do something similar. It appears that it may lock threads after 6 months

Good! So it’s even more possible because they’ve already implemented it elsewhere.

Instead of playing the necro you choose to necro the forum.

I think we all know that necroing the D3 forums is the true end game. If you look at the history of these forums, I’m pretty sure it’s the same handful of “complaints” that comes up over and over and over.