Gear Gems: Helm is typically Amethyst, but can be a Diamond for CDR. Chest/Legs will be Diamonds.

Rings: Band of Might, Convention of Elements.
Optional: Unity

Recommended: 1. The Flavor of Time - having double Pylon time is a pretty significant upgrade to DPS output. As much as I miss having Brawler, I didn’t miss it that much when I had a full minute of Power or Conduit pylon…

I tend to at least try for 110% AD (50% Paragon, 20% Gloves, 20% Shoulders, 20% on at least 1 ring). There are several different ideas on Life % and LpFS, with the most common setup being LpFS on your Weapon and 15% Life on your belt. If you are having trouble recovering health, a dual Life per Fury Spent setup is optimal, because if you have +Max Fury on both your weapon and belt, you will recover somewhere between 600-800K HP from Seismic Slam. The trade-off is that you will need more points in VIT to hit your target HP range.

Sprint:Marathon, WoTB:Insanity and Wreath of Lightning all add to movement speed, which increases your DPS output. The more mobs you can charge against, the better. There are 3 styles of Furious Charge that most players will need to employ at any given time – Long Distance “End-to-End Charges” which is good for survival and also large group DPS. Short Distance, but more frequent, “Ping Pong Charges” which is good for smaller group, targetting a specific mob or utilizing your occulus ring spawns. However, they make you more prone to being hit by heavy melee swings (e.g. Entombed Hulks or Dark Berserkers) and also ranged attacks (e.g. Lacuni Huntress or Vile Temptress). Lastly, “Wall Charging” mainly used to fight the Rift Guardian.

You typically will only be able to kill Champ/Elite packs on large, open maps in which those mobs follow you around from pack to pack. This is a trash-killing build that will either need a long-term fight or Conduit Pylons to kill large packs of blues/yellows. There are always outliers that will prove this to not matter, but they are fairly uncommon. Shield Pylons are also solid to help smash down blue/yellow mob groupings, barring you have enough mobs to reset the FC cool-down. Speed Pylons can be good for DPS or finding better density or moving onto the next map (all 3, really). Power Pylons are best saved versus the RG.

Some RGs will be unbeatable in “average” circumstances, such as having 3:29 or less, to kill them. Some RGs are killable with 4+ minutes, especially if you have a Power Pylon. Some RGs are unkillable with 4 minutes and a Power Pylon at high-GR levels. It will be up to your character’s gear, your account Paragon level and your play-style and ability to see what those are. On average, I personally hate the following RG: Vesalius, Perendi, Blighter, Voracity, Eskandiel, Hamelin, Stonesinger, and the Choker. I absolutely love Saxtris and always appreciate a good Sand Shaper, Raiziel and even at this point in my GR clears – Cold Snap (on a map I can easily wall charge him on). The bosses not mentioned will gather mixed results depending on the map tile, time and pylon availability. You will need to wall-charge versus RGs, and that will be allowed the easiest in small hallways or against pillars/pylons. Lastly, some RGs are killable only on maps that allow you wall charge them THROUGH a pillar so they cannot turn around and quickly one-shot you (Blighter comes to mind).

The most common mistakes are people trying too hard to finish off packs of mobs and running out of FC charges, trying to force the killing of blues/yellows (especially true if you kill 4 out of 5 blue mobs and the last one is just BARELY alive, but you just cannot keep attacking it) and trying to fight the RG without utilizing the Wall Charge tactic. Also, keep an eye out for your Ancients and ensure they do not die off. Heavy hitting, melee-dense mobs are great at killing them (Lacuni, Dark Berserker, Phase Beast, Emtombed Hulk rifts come to mind).

Thanks for bringing this over. I know you’ll need to build trust levels on these new forums, so in the meantime, go ahead and edit as much as you can and I’ll ask Nev to get this pinned.

Any updates on getting this pinned? This is a main build we need up top.

What do you guys think about the 132 clear with this build? Is it in line with expectations? Do you think he could have done higher with R6 hota? 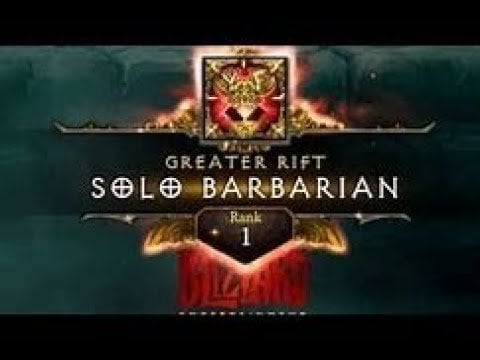 Why not use Ignore Pain Bravado instead of Sprint? You get the same speed bonus with damage reduction and crowd control immunity.

Why not use Ignore Pain Bravado instead of Sprint? You get the same speed bonus with damage reduction and crowd control immunity.

Perma-Wrath already gives you CC immunity. To get perma-IP, you’d need 50%+ CDR, and that would detract from DPS rolls. Not worth it.

Sprint = pure DPS due to Standoff, no CDR required.

What do you guys think about the 132 clear with this build? Is it in line with expectations? Do you think he could have done higher with R6 hota?

I think it’s a perfect example of how weak Barbs are.

9800 Paragon and he got 132. And he couldn’t get it without broken wall-charging.

Can R6 HOTA get that? Of course! R6 got 134 before Hulda asked for his account to be deleted and quit D3. And that used both wall-charging and the bug pack exploit.

This is what we’ve been saying all along: Our top builds rely on gimmicks and exploits. If you couldn’t wall-charge, you couldn’t kill RGs with Vile Charge past 128 or so.

Can R6 HOTA get that? Of course! R6 got 134 before Hulda asked for his account to be deleted and quit D3. And that used both wall-charging and the bug pack exploit.

I didn’t know about that, thanks. I was thinking this was the highest clear to date. Para 9800 is kinda crazy though. But yeah, like you said, broken mechanics. Really kills the desire to push when you have to do silly things like that…

Because of the CDR needed is my guess. Need to much CDR to keep it up and it takes away from DPS

correct me if I’m wrong.

edit: sorry, the answer was already there, I should kept reading before responding.

I’ve always had an issue with FC running out regardless of what rune I choose. I wonder if they could just fix the Merciless rune so that it doesn’t just give up to 10 seconds CDR, but maybe 20 seconds of CDR and lets you build more stacks of FC.
Maybe that’s a crazy idea, but off the top of my head it seems feasible without messing up other stuff. Let me know if I’m wrong.

Also, I looked at the build for the guy in Euro that did 132 at 9800 para. Lulz.
eu diablo3 com/en/profile/darkpatator-2265/hero/29309228
If you look at the passives he has, I was wondering if it wouldn’t actually be better to use Pound of Flesh rather than Relentless?

There is no way not to use retentless, it would make half of the boss unplayable. If you watch my bossfights on 131 and 132 solo, i survived only thanks to retentless, even proc wouldnt have fit for those fights.
Also wallbang isnt a big deal for charge,saving only 1min compare to bosses like raiziel, tetrys which you need to face charge. The real problem atm is saxtris which is 2tier advantage compare to any other boss
135/6 should be possible with bugpack And sax spawn, but i wont go for that kind of retarded push

Dark you do any testing on ptr with morticks? Wondering if it’ll add even 1 gr.

Im EU so my ping on ptr makes any charge build unplayable, bracers could offer more comfortable boss fights, need to see how it goes on trash fight without apds but could work. Dmg wise, no difference except you would save a lpf roll on belt to %life but it aint more than a 2 to 5% increased dmg depending on your paragon

How do you best adjust this build for speed farming gem-ups or T16? Swap out stricken for ?? and then… I’m not sure what else to change. Vile Wards could move out for nems if you don’t need the damage I suppose.

It seems there’s a lot that could happen with jewelry in S18, too, thanks to the new stuff.

You think we need to have this changed into a Wiki or something so we can get this pinned and updated for each season? I know it needs the videos added Cendiesel had on the old forum. I still have the link to that guide: Diablo 3 Forums

Just wanted to make sure we keep this updated and in the loop since its still a viable build.

Also any news from Rage on a new Leapquake build?

I think Rage discussed LQ with you in a different thread, and for now, it looks best to just port over S4’s old guide and maybe spruce it up a bit similar to what you did for IK HOTA.

As for this build, it hasn’t changed at all, so it doesn’t really need an update, but if Cendiesel doesn’t come back to update it, we should consider writing a new one and getting it stickied.

I think Rage discussed LQ with you in a different thread, and for now, it looks best to just port over S4’s old guide and maybe spruce it up a bit similar to what you did for IK HOTA.

Will do bud. Will take a look at charge too after that.

I am finally back from doing my job out and about in the ocean and have finally jumped into S18. Updated. I like Mortick’s Brace and Flavor of Time. No longer using double LpFS because you gain 5364 from WoTB which was higher than both the weapon and belt, combined. Utilize Area Damage on the weapon and Life % on the belt. Also glad I don’t have to farm stupid Hellfire Amulets anymore.

Cen thanks for updating the guide and welcome back! You can get around links at your current level by putting ` at the begging and end. Such as