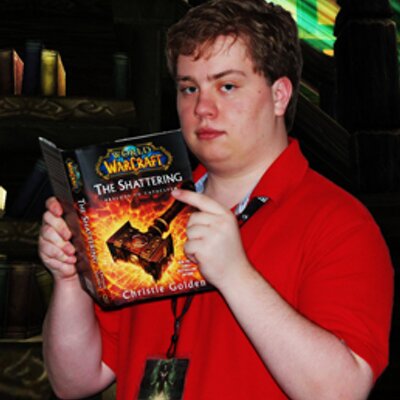 @TheRedShirtGuy
On the mobile game: Jason Schreier has said there are at least two Warcraft mobile games in development (though he didn't say which one is the one getting announced next week), one based on Pokemon Go and one based on Clash of Clans. He's "heard good things about both."

Imagen this BUT for wow you walk and stuff to gather herbs, Ore, Leather but with your pets too! pic.twitter.com/Tesr8XmXlE

If its true, seems like they’re listening. I said that we should get a Clash of Clan style for the WarCraft mobile game and others were wanting a Pokémon Go style. This is making things more interesting.

My younger brother plays Clash of Clans and he enjoys it I guess, he used to be a big WoW player and had decent taste in games. Plus if all these other games are copying it, it must do something right.

Don’t really know much about Pokemon Go. I mean it has the name Pokemon in it, so that’s probably why that blew up, I dunno.

Much more appealing than the generic mobile version of WoW I thought they’d release.

My dad plays clash of the clans.

It might be a way to pull him in.

They can make a million games and I’ll never play anything on my phone but I came from a time before cellphones were a big thing so I don’t ever play mobile games.

Don’t really know much about Pokemon Go. I mean it has the name Pokemon in it, so that’s probably why that blew up, I dunno.

It is a game to capture pets and battle with them. Essentially a mobile version of the in-game pet battle system I would assume.

There are a lot of people who have asked for a mobile version of that for years now. I am honestly surprised that was not their first choice for a mobile game.

I’m not at all interested in a Pokemon Go inspired Warcraft game.
I hope they’ve gone with the Clash of Clans one as their announcement. Assuming the leak is true.

but I came from a time before cellphones were a big thing so I don’t ever play mobile games.

You probably came from a time before gaming PC’s were a thing too, if you’re going off that logic lol. There’s what, like a 5-ish year window between mobiles and PC’s being common household appliances?

Interesting. The Pokemon Go type game has been a rumor for awhile. There’s a ton of Clash of Clans type games out there so it would probably make a ton of money for them. I was thinking they might do an RTS game for all the people clamoring for WC4.

Cell phones didn’t become mainsteam until the early 2000’s when flip phones started getting more common and then they REALLY exploded with the iphone 4, you were right though about a 5-6 year window because I started PC gaming and being heavily on the internet in 1995.

Clash of Clans is literally the worst style of mobile game.

And as someone with agoraphobia, I’m not playing a Pokemon GO-esque game anytime soon. I TRIED to play Pokemon GO but it just doesnt work when you can’t leave your house lol.

Eh, I wouldn’t say the worse since it’s very popular. Its better we get something like clash of clans instead of candy crush.

I will never play mobile games out of principle. They are just too predatory for me

Eh, I wouldn’t say the worse since it’s very popular.

I hate games where you can lose resources to people attacking you.

Especially when they add in an option to buy shields to protect you for real money. They’re extorting money from you to keep the stuff you… earned.

Was also thinking, the removal of mission tables would be a good reason if it is a Clash of Clans style game.

I really hope it’s that.

If they are anything like those two mobile games…I’ll be disappointed. I’m not against the concept of an rts mobile game but I’ve not seen a good mobile rts. And pokemon go…

I’ll definitely pass on those, but that’s just me and mobile games in general except board games like chess/go…

I feel this way too, just for different reasons. Phones are just too small. Even the big ones. I have 20/20 vision – I can see it – it’s just too small to be enjoyable. When I test drove the infamous Diablo on the phones at Blizzcon, it wasn’t bad per se, but all it did was make me want to play it on something other than a teeny tiny screen. I have a couple simple games on my phone like Tsum Tsum for if I’m bored in an airport or something, but outside of things like that, just not interested in playing games on a phone.

There’s what, like a 5-ish year window between mobiles and PC’s being common household appliances?

Whoa there. Absolutely not. Not if you’re talking about the kinds of phones on which you would play a real game. My family had a PC starting in something like 1983 or 1984 maybe not everyone had them, but they were out there and they were not too prohibitively expensive. The very first iPhone didn’t come out until 2007 (twenty odd years later!!) and the iPhone 4 was 2010.

When mobile phones started coming out, they were really JUST phones. There were no games to play – at least not anything resembling a real game. There were a few flip phones which advertised having things like mini versions of Pong or Snake (my first flip phone had Snake on it, which was in the late 90s), but I really don’t count that as mobile gaming. It was nothing more than a fidgit toy when you’re bored.

So saying there’s only a 5 year window between PC gaming and mobile gaming is hogwash. PCs have been playing what most would consider REAL games for much longer than phones.

And the reason they don’t release it on PC is because everybody has a phone these days right?