For anyone who didn’t see, for a bit there this past week, we had the ability to use @target in our macros using conditionals: 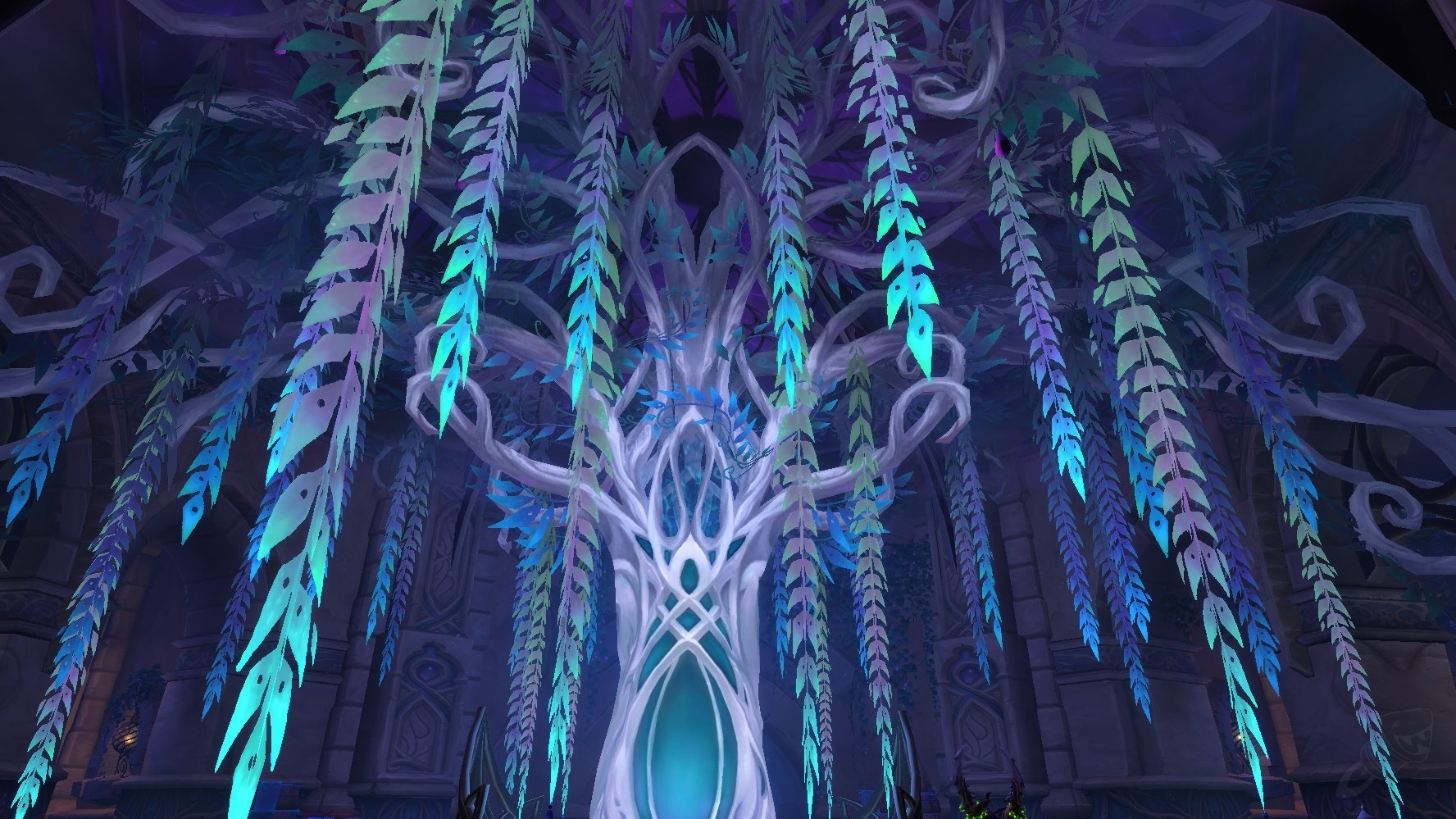 Have you ever dropped your Wild Spirits, Earthquake or AMZ on the ceiling or the random lamp post in Halls of Atonement? Players have found out that you can use macros to target friendlies or enemies with Reticle-based spells without having to worry...

This was quickly fixed, and no longer works: 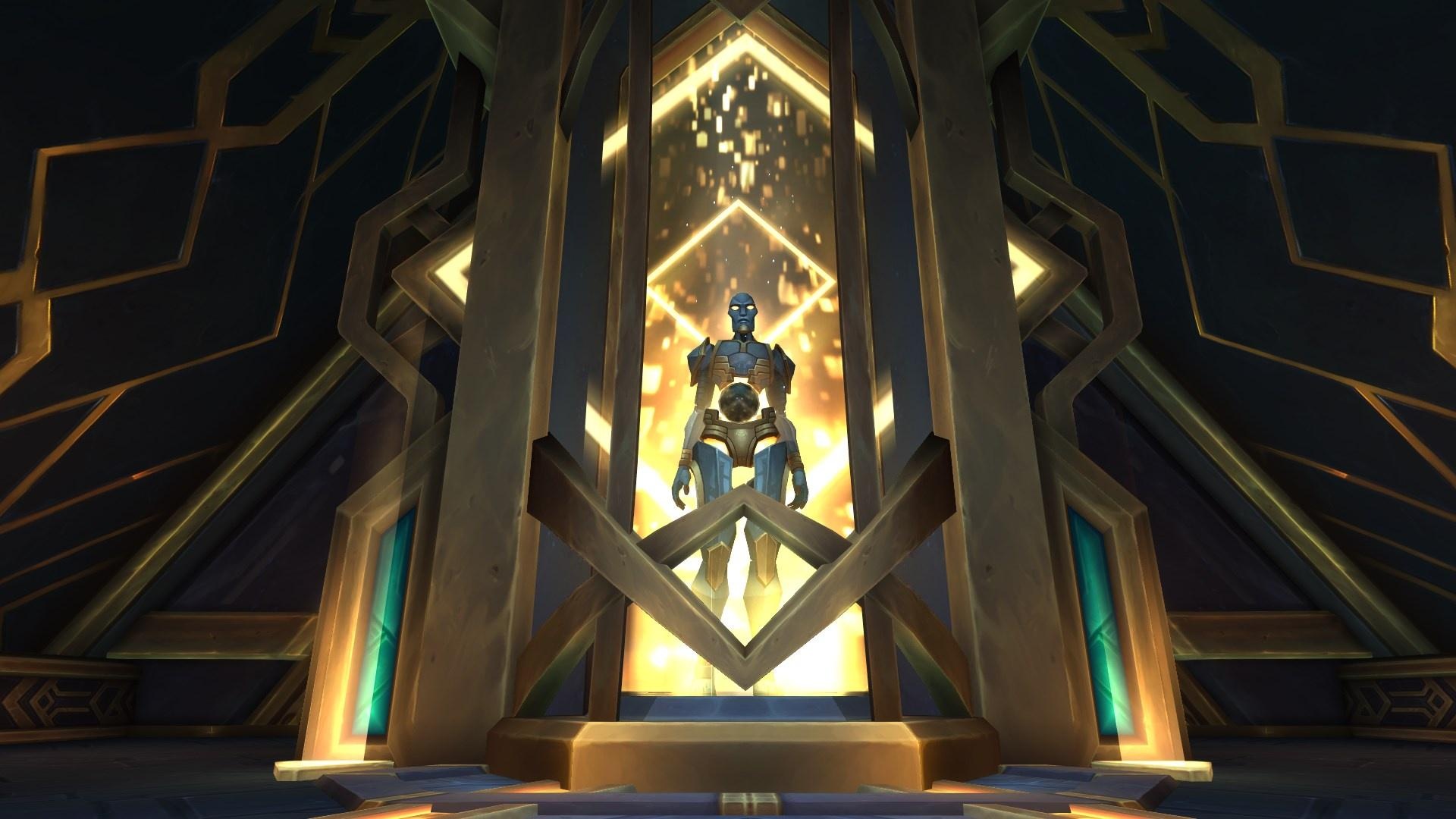 @Target macros seem to have been fixed, preventing players from automatically targeting players or enemies with reticle-based spells.

However, as you can tell by the comments in those articles, as well as Reddit and even General Discussion - this is a horrible thing to do.

Targeting Reticles are, by their very nature, an accessibility concern, as I’ve brought up before. I have shaky hands that can jerk at times, and I’ve ended up placing my Wild Spirits, Rain of Fire, Efflorescence, etc. on the wall, on the floor nowhere near anyone, etc. before because of it.

There’s also the issue that people without accessibility issues bring up about them constantly - terrain in WoW clips horribly. You can go to place your reticle and suddenly your healing rain is on the ceiling, unable to reach anyone. You somehow placed the reticle under the environment, thus still, not hitting anyone.

@Target is something that needs to be added to the game. Being able to use @player has been around for years, and it’s hurt no one, and no one has complained.

There are concerns about @target in PvP - specifically for CC skills like Freezing Trap and being able to cast it on targets off-screen.

However, this is another case of PvE (and accessibility), suffering because of PvP.

Why can you not just make it so the @target macros don’t work when targeting players with specific spells? Like, allow things like Healing Rain, Efflorescence, etc. to do it, but not things like Capacitor Totem or Freezing Trap, for instance. Even a blanket disallowment in PvP would work until proper coding can be made to do something like that - PvE players shouldn’t have to continue to suffer over it.

And for the very few instances in PvE where people found a way to exploit an @target macro - fix the mechanic, not the macro. For instance, halls of atonement last boss, if a warrior used @target heroic leap, it let them absorb all 4 beams as they landed directly on the boss. This could easily be remedied by a simple hotfix to the boss mechanic and how beams are absorbed.

Please, add an @target conditional to the game baseline. If you have to, disable it in PvP until you can find a way to make it so only certain spells will work with @target in PvP.

Especially with the knowledge that Evokers will have targeting reticles, this is very much needed.

“Because it would confuse the playerbase”. At least this was the take in regards of spells behaving like X in PvE and like Y in PvP when this was discussed years ago. Safe to assume this would be recycled as a reason in this case. If only something like a tutorial could prevent this… if only.

At least this was the take in regards of spells behaving like X in PvE and like Y in PvP when this was discussed years ago. Safe to assume this would be recycled as a reason in this case. If only something like a tutorial could prevent this… if only.

In that case, just disable it in PvP completely until they can add something that explains that well to players, be it a tutorial, or a battle.net article, etc.

PvE shouldn’t suffer for PvP reasons, just like PvP shouldn’t for PvE - for instance, if a tier set is too strong in PvP, they nerf it for PvP only. If a spell hits too hard in PvP - they nerf it just for PvP. Etc. Why is the same not done for PvE?

Why is the same not done for PvE?

Cause “reasons”. In case i wasnt clear, i was mocking them with the tutorial part. As a tutorial would very easily fix the alleged “confusion reason”.

This reason already infuriated me back in the days when it was first used because it shows their assumption that they are the smart ones while we are the dumb ones. Yet it is always us that finds these things and we behave different to their believes. Blizzard clearly lags behind other companies in this regard as there are plenty of companies that are very well aware of how “crafty” their players are.

In this day and age, accessibility options should only ever be expanded, not reduced.

PVP: This can be disabled. In the past there have been stat templates in effect for PVP only, and with Dragonflight we are again returning to a “WoD style” system. There is definitely precedent for balancing stuff separately on more than just a number basis.

PVE: The uses for this in PVE are obvious. It makes it easier for people who have difficulty aiming things, but is this really a big issue? I’ve had cast@mouseover macros forever for targeting circle skills for years. How much difference is there between having it cast at where my mouse points and cast at the target i’m already focused on and attacking?

Realistically, this only punishes those who need the most assistance from such a function.

Look to Last of Us 2 and Marvel’s Spiderman games for recent games with hugely in depth accessibility functions that opened the game up to damn near everyone.

There is no reason to make it harder for people to play this game at a basic skill level. Challenging content is there for those who need it, where such a macro won’t make or break a fight. It can be disabled in PVP so that it’s truly a test of skill and function, and it can be enabled in PVE for those who need it.

I personally see very little reason to not allow GTAoE (Ground Target Area of Effect) abilities to be macroed to drop at a target’s feet in PvE.

It only serves to help those with disabilities or hand coordination problems. It doesn’t give them an advantage either (Ignoring the fact that anyone could use the feature) as it still restricts the placement of the GTAoE.

As for PvP, the issue is mostly on GTAoE that include CCs, but the main outlier is Freezing Trap.
I would say that Freezing Trap in itself has a major flaw in its design to begin with. It simply doesn’t work well in PvP due to the nature of client-server relationship. It’s why most hunters usually line up the trap with another CC to ensure that it lands to begin with.
This being said, I think disabling the @target if the target is an enemy player would be a good compromise here.

One of the reasons also being players using third party websites to “know these things” like the macros while other players dont visit these websites.

Which wouldn’t be an issue if said explanations would be part of the game itself. Especially in regards of macros of all sorts. Youre pretty much forced to go to third party websites if you want to go more indepth because the explanations in the game are lacking or non existent.

Having it disabled for PvP makes sense for abilties such as traps, heroic leap and capacitor totems.

I’d assume this would be required for PvE aswell although with abilities like traps, heroic leap and capacittor totem. Like Anduin Wrynn’s adds you could’ve just done a macro to properly hit the CC instantly which feels silly and removes abit of the difficulty.

I wonder how it would work on moving targets aswell - does it just throw it at their location when the macro was pressed or would it then calculate where the target is going to move?

You could build in a toggle for when you want a spell to be working like it is in the macro and for when you want it to work like it does now. LoLs smart cast for instance has a similar nature for skill shots.

As for the moving: It shouldnt do that but cast it on the spot. Also it would be a mess to calculate if not flat out impossible because of player intervention in regards of moving adds.

I mean, how is that any different than when other classes can use a Focus Target macro to insta-Paralyze, Imprison, Shackle, Fear, etc. on most fights where it’s applicable. They don’t even have to have the target on their screen.

I wonder how it would work on moving targets aswell

It tosses it where they were when you pressed it - meaning in most PvP, an @target macro won’t help you. Very few PvPers stand still. The @Target macro will help with Freeze Trap if they’re close to you, but in general, the travel time of the trap means you’ll miss with an @target. (And tbh, if they’re close to you, aiming it isn’t a concern in the first place, usually an @player macro will hit them)