I am the OP, and my reasons for opposing this moronic rushed content timeline are myriad. The fact that I would like to see at least 1 set of glaives drop and actually get to play the game with them for a while is just one piece of it.

But I’m not trying to do 6 months of sunwell.

I agree with you in principle.

The reality is blizzard always stated they wanted faster expansion cycles but was limited by the time it took to create them. Blizzard said they’d ideally hit 1 to 1.5 year expansions.

TBCC, and soon to be WOTLK are all ready created games. This makes releasing content faster a possibility. Blizzard is only concerned with their revenue cycle. They have no other releases coming out and they want to keep the money coming in.

It’s a sad reality of capitalism. What matters isn’t the quality or ethical production of the product, but the revenue stream for the shareholders sake.

There is however a trade off between quarterly profits and the long term profits of the business. But because this is capitalism, and because execs want a nice bonus before they retire or jump ship to their next position, they prioritize this quarter and let the quarters after be the next exec’s problem.

So you’re a greedy GM that stole glaives from your guild. For shame.

Glaives are a 5pct drop chance so you are basically proposing a 40 week raid cycle. I don’t understand your logic with getting a set of glaives.

I’m not trying to do 6 months of sunwell either.

Make it 3 months and call it an xpac.

You should want them to take their time, so that you can enjoy Wrath.

Yes please, we all totally want to sit in ToC for 5 months.

I don’t understand your logic with getting a set of glaives.

Its mostly scrubs that didn’t raid in original TBC wanting the things they could never attain before this time around. Like expecting a full set of BiS items to fall into their lap with enough time to pwn noobs in bgs. 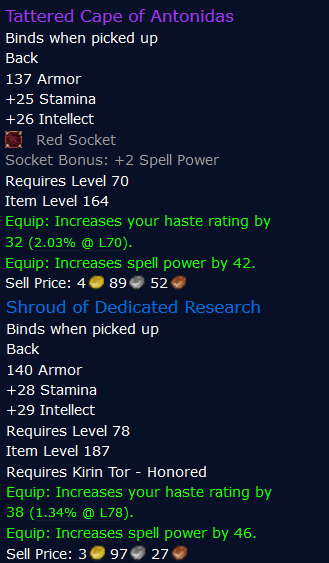 Here’s a staff comparison from that level 74 dungeon you mentioned. KJ staff is just better: 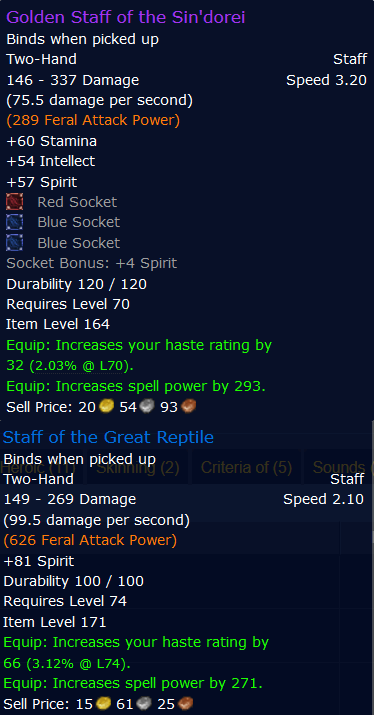 I’ll take a look and see. Gotta factor in the set bonuses too on the Sunwell T6.

Don’t the set bonuses get nerfed at some point in wotlk?

Glaives are a 5pct drop chance so you are basically proposing a 40 week raid cycle.

And it’s multiple raid cycles. BT/Hyjal. ZA. Sunwell – not to mention the impact that this senseless rushing has on PvP seasons.

All of this content should be savored and enjoyed instead of rushing through it to cater to the crowd that just wants to see the boss once and then quit.

I don’t understand your logic with getting a set of glaives.

It’s quite simple, the rushed releases seriously exacerbate the downside of loot variance.

Regardless of the loot issue though, I am opposed to this senseless rushing. Playing the game is fun, I want to maximize my enjoyment of it rather than rush to the end of classic.

Yes please, we all totally want to sit in ToC for 5 months.

Said the guy who’s in a hurry to raid 25m nerfed Naxxramas lmao. “They should rush to Ulduar though” yeah good idea, let’s have S5 gladiator titles decided almost entirely by who does and doesn’t see key pieces drop. Let’s rush to S6 before even high rated players can finish their S5 PvP set. But you raidloggers never think about what happens outside of your 3 hours on a Tuesday.

Its mostly scrubs that didn’t raid in original TBC wanting the things they could never attain before this time around. Like expecting a full set of BiS items to fall into their lap with enough time to pwn noobs in bgs.

I was taking 18 credit hours of challenging, high level classes in university and also working during TBC and didn’t raid, but I still managed to finish in the top 0.5% of the rated PvP ladder and get my Gladiator title. My life circumstances are different now and I am leading a raiding guild while also queuing at 2.4k mmr in arenas.

We’ve also seen only 1x CVoS, 2x Skull, 0x Zhar’doom, and we’re giving Crystal Spire of Karabor to alts and off specs. Rushing the content releases has a strongly negative impact on guilds and players with bad loot RNG. And it has a negative impact on everybody who enjoys actually playing the game after the 1st time that they clear a boss and log out for 6 days.

T6 Hunter boots in terms of DPS are better than the level 77 blue boots, even without factoring set bonus. They’re a little worse but seem close to the level 80, ilvl 200 boots too.

Don’t the set bonuses get nerfed at some point in wotlk?

Can’t remember, I’m taking these off of wotlkdb. Shows the 4 piece bonus as being 10% Steady Shot damage.

At what point then do you wager your happiness among others?

Hmm lasts longer than I thought.

Ilvl is odd then.

I would love to win the lottery next week and retire in my 40s too but sadly thats not how RNG works. Expecting multiple people to be full BiS in your raid group especially of the same class is pants on head ridiculous. Its not going to happen.

So you can raidlog Naxx again?

I really liked Wrath’s Naxx on 10m. It’s one raid that I felt really improved with a smaller group.

Actually looking at it again level 80 gear kind of blows it out of the water but it does last longer than I thought it would.