I’m just looking at pure numbers, but that makes sense.

I’ll take the L on that.

This feels…kinda reasonable? This doesn’t feel like fun police in the same veiin as transformation items having an absurdly long cooldown for no reason or limiting certain things to certain zones.

Soar isn’t broken or in need of balancing though. It’s not better then normal flying. It’s just a zoom ability when you launch yourself from a high perch.

Balancing would be removing the CD completely if they wanted to nerf this speed.

I suppose an argument could be made for this if you’re farming old world rares for transmog pieces. Like, let’s say players want to go to Zereth Mortis and farm those rares after they hit max level in Dragonflight, knowing that they’ll be easier to solo.

They all zone into Zereth Mortis at the exact same time, and they see a rare spawn on the map at the other end of the zone. The Dwarf mounts up on his flying mount at 410% speed, both Dracthyr use Soar to launch themselves over at 930% speed.

By the time the Dwarf warrior gets to the rare, there’s a good chance that the Dracthyr have already killed it, and the only reason he wasn’t able to tag the mob is because the Dracthyr were able to get across to the other side of the map at twice the speed that the Dwarf was able to.

Can the server even draw terrain in that quickly?

^ You guys see this? This is likely the reason why the change was made.

Look, I know it’s fun to dunk on Blizzard, and there are many times where outrage towards them is justified. However, not every single thing that is done is from the standpoint of “fun detected.”

Over time, this game has become more demanding in terms of specs. Yeah, it’s still a far cry from stuff such as Elden Ring, but it cannot be ignored that the minimum specs in 2004 are NOT running WoW now. Some of the folks that play WoW are actually fairly casual in terms of being PC gamers. These people are happy if the game runs at 30 FPS at the lowest graphic preset.

I can tell you guys from personal experience that going into Legion my PC was starting to struggle with loading times as it still had an HDD at the time. The swap to an SSD did wonders for my PC, but I’d bet a fair amount of money that there is a good portion of the playerbase that still runs this game on computers that are 5-10 years old, and a fair number of systems in that age range are going to be running it on an HDD.

I can totally buy popup and loading times being a major factor in cutting down the speed. I’ve actually stress tested an extremely low end laptop back during the Cataclysm beta to prove a point to a friend that thought they didn’t need to upgrade. Game barely managed a steady 20 FPS, and any attempts to fly at max speed for more than 30 seconds or so would crash the game.

TLDR: Performance issues were likely a factor on lower end systems. The current speed is still stupidly fast when compared to our standard flying mounts.

If anything, I’ll echo what’s been said by plenty of people: there’s no reason for the racial to have a five minute cooldown. I say set it to one minute, two tops with the CD timer starting upon landing, mainly so people can’t just divebomb someone in War Mode, then escape easily without consequences if an attempted ganking went poorly.

“Wow folks are having A LOT OF FUN. BETTER NERF IT” 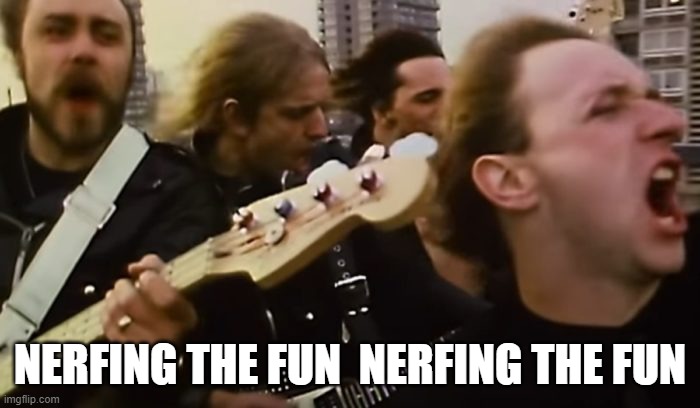 The cd is nuts and this doesnt give anyone a tactical or competitive advantage.

Enough people cried that they get something no other class does and all the sudden it’s too good to let the new class have.

mount farming, pet farms, gathering — these are not good reasons to take away or limit the kind of FUN this allows every player to enjoy - as long as they fool around with an evoker from time to time. c’mon.

Some of us just want to play alone and fly… as a dragon… for free. let it be.

Some of us just want to play alone and fly… as a dragon… for free. let it be.

Which you can still do. This change still means you’re extremely fast. In my example still faster than the Dwarf. You just won’t be at the other end of a zone before he gets half-way across.

You really wouldn’t tho because you have to position yourself at a high point to really gain the momentum. It’s not flying, it’s just fancy gliding.

If it actually functioned like Dragon Riding, then yeah. That’s different.

Thats is why they nerfed it. because it was so much faster than any flying mount
in the old zones.

What’s the point of this nerf?

They laid out the reasons in a quite detailed post, and those reasons made perfect sense. Did you not read the post?

and those reasons made perfect sense

The majority of forum posters do not agree with you here pal. They do not make sense at all.

In case it wasn’t already obvious by the massive timegating on literally everything, the nerfs to the heirlooms, the exp nerfs.

The majority of forum posters

A bunch of people are absolutely unhinged about a thing that never even existed. “fUn dEtEcteD” as everyone parrots the person next to them. “Godmode noclipping around the map is part of muh dragon fantasy”

Being in a noisy crowd doesn’t make you right unfortunately

thing that never even existed.

Except on alpha where it was heavily praised.

fUn dEtEcteD” as everyone parrots the person next to them.

The meme exists for a reason and we are using the reason blizz provided for the nerf and it’s really a tough sell for blizz to use “transportation speed in outdated content” as a reason to nerf a fancy glide on a 5 minute CD.

Being in a noisy crowd doesn’t make you right unfortunately

Why are you right? I’ve not seen any argument about why the nerf was necessary beyond “because it is”.

Yeah they did it because it will give an unfair advantage in Pet Battling what such great reasoning right?

Greetings Dragonriders and Dracthyr! With the next alpha build, we’re making a change to Soar for Dracthyr that reduces their maximum speed from (roughly) 930% to 640%. The maximum speed for Dragon Isles Drakes is unchanged. This only applies to the Dracthyr Soar racial ability. In the Dragon Isles, all characters of all races are on similar footing in regards to their ability to traverse the terrain because everyone can summon a Dragon Isles Drake. However, this isn’t the case in other areas …

Can’t have been looking hard.

Why are you right? I’ve not seen any argument about why the nerf was necessary beyond “because it is”.

You said it yourself, it was on an alpha. I know I’ll get sucked into a circular argument here but dang this is peak whiny and hurts the credibility of people asking for serious changes

For whatever reason, this just reminds me of that American Dad bit where two characters were commisserating about being upset that Men had only just most of the power instead of all of it.