So SL isn't friendly to people who play multiple specs/classes?

That’s the sense I’m getting. So glad I didn’t spend a single cent on SL and bought it with gold

What did you read to jump to that conclusion? Not disagreeing, just generally curious. Is it Covenants?

Why do people make posts like this only to never explain their rationalizations? So counterproductive.

It’s the systems in relation to one another. If you want to play multiple specs/roles one will almost certainly be sub-optimal since you cannot switch things around.

Considering you’ve been able to play more than one role optimally for years, it’s a bit agitating that we will suddenly have to have at least two characters of the same class in order to properly kit them out.

Covenants are a meaningful choice. If you feel you must have immediate access to Covenant abilities, then that is your decision as a hardcore player (this would be considered hardcore). Covenants fill an RPG element in the game that WoW really never has seen, even considering, TBC with Aldor and Scryer, and it’s on a far larger scale.

Prior to dropping MVP, I asked a folks on the internal raid team about their feelings on Covenant abilities on raid bosses. They shared the same thoughts–> “You’ll want a mix of Covenants in the group. Stacking is meaningless.” Sure, Venthyr might be great for a couple encounters and Mythic+; but Fleshcraft is a gem. Soulbinds and Conduits don’t really add that much player power.

If you seriously care about 0.1-0.2% differences, then as a theorycrafter, I think you are impossible to satisfy. If you think a Covenant ability is so strong you cannot justify taking other Covenant abilities, then rather than scrap the “tough choice” aspect and ruin the RPG elements of this huge network of systems, Blizzard should bring it in line with other options.

I’m flip-flopping a lot on Covenants. But after seeing all the supporting systems, Covenants don’t mean much to your performance. Each signature ability has merits, but “BiS” is situational. Each class ability can be tuned rather easily.

At the end of the day, if you feel like you need to maintain 4 characters, then you are a very tiny minority. It’s no different from the “Remove LFR” posts. If you don’t like it, don’t do it, but remember a lot of people enjoy it for the reasons you don’t.

Most of its subjective anyhow.

I had two characters at max cape resistance and was bored so I brought this up too. While making and gearing a character at the very end of an expansion is hard once you have your resistance and even ‘partially workable’ corruptions its easy.

@Vadimer; they answered that question. Even within your spec you have multiple build trees you can go for though after selecting a covenant. You can select different conduits for each soulbind and pick and choose a soulbind accordingly for the content you’re doing (AoE, ST, utility, etc etc).

Basically if I want a pve dh and a pvp dh I have to level two dh’s is the vibe I’m getting here?

The correct way to play Shadowlands is in fact to play 3-4 characters. They’ve made leveling easier, every single grind in Shadowlands is weekly capped, M+ farming is not really needed, there is no island to infinitely farm.

Covenants are locked, Conduits are fairly punishing to swap in and out. Legendaries are progressed at a fixed rate per character and you’ll attain only 1 legendary by the time Castle Nathria opens meaning that if you want to be successful week 1 you want a raid-oriented item for your main spec and your off-spec will be semi-unviable because the content is tuned around the assumption you’ll pick your BIS raid legendary.

All this amounts to a system where you’ll want to cap your weekly content each week with each of your characters, and beyond that, you’ll only be attaining rewards from M+, raids, or PvP which have their innate loot-gating mechanisms.

TL;DR: Multiple specs on one character are frowned upon. Multiple characters is highly supported.

Covenants are something that game designers put into a game because they appeal to game designers, not to customers. It’s a self-licking ice cream cone.

Maybe at some point Blizzard will institute procedures where its employees are encouraged to act in the interest of their employer, not their own egos.

From the Bellular video I watched concerning Conduits they don’t seem to be that spec-specific: 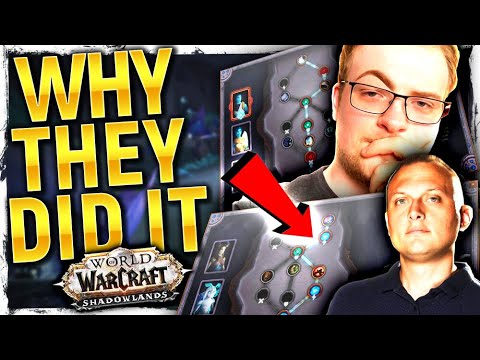 But one thing I need to research immediately after this post is if Soulbinds are spec-specific or not similarly to your Azeroth essences.

I see no reason why that wouldn’t be the case but it also wouldnt surprise me.

Edit: Looked and you can swap Soulbinds at any time. If the impact to efficiency isn’t that significant you can just dedicate each Soulbind to a different spec.

Doesn’t seem to be a big issue to me as a tribrid player but we’ll see going forward.

But one thing I need to research immediately after this post is if Soulbinds are spec-specific or not similarly to your Azeroth essences.

Soulbinds are class-wide effects. Some maybe for spec-specific, but swapping specs doesn’t change the effect.

In terms of player power, Soulbinds and Conduits are very balanced. When it comes to mechnaical differences, that’s where you’ll have the biggest impact to performance. For example, Venthyr Teleport with a Sprint after casting is VERY powerful. There’s a lot of overlap with Night Fae’s ability and that isn’t good for balancing (Night Fae was strong because of the sprint, but now that Venthyr can get it, that makes Night Fae much weaker when compared to Venthyr).

Covenants are a meaningful choice

There’s nothing meaningful about picking the best option.

I don’t personally see a problem
With it but will have more of an opinion when SL is closer.

But leveling two toons is somehow better then being able to do everything on one toon. Makes zero sense, even worse it’s two of the same toon you must level. Don’t even get any variety with alts because you will be so busy trying to make two toons of the same spec do what you want them to

In terms of player power, Soulbinds and Conduits are very balanced. When it comes to mechnaical differences, that’s where you’ll have the biggest impact to performance. For example, Venthyr Teleport with a Sprint after casting is VERY powerful. There’s a lot of overlap with Night Fae’s ability and that isn’t good for balancing (Night Fae was strong because of the sprint, but now that Venthyr can get it, that makes Night Fae much weaker when compared to Venthyr).

Yeah, I figure thats something to take in consideration for players on the extreme high end. When I looked at the informational page on WoWhead I saw that you could change who you’re soulbound to at any time in a Covenant UI with a few clicks. I imagine someone that plays multiple roles could just dedicate each of their roles to one of the three individuals you can soulbind to in a given Covenant.

Personally, I pretty much keep my progression limited to heroic raiding so im honestly not too concerned about the min/max aspect of these systems. Im sure for a given covenant there will be a soulbind that is the most optimal for multiple roles of a given class and that may be a future pain point for players.

I like the theme of Maldraxxus so im going Necrolord. That’s pretty much it for me.

I can see how someone who wants to do both types of content equally would be bothered. As someone who focuses primarily pve and does pvp thing on the side I guess I’m not bothered.

If you want to play both optimally - yes, most likely.

You will not have your BIS legendary for tanking and your BIS legendary for DPS when Castle Nathria comes out. Castle Nathria is being tuned around legendaries per the dev team (they learned their lesson from Emerald Nightmare according to them). Even beyond that, some Covenant class-exclusive Conduits and Legendary Affixes may be better for one role or the other, and you may be in a situation where both your specs want to use one soul-bind for both tanking and DPS but you can only gem one of them for tanking and your DPS spec has to use a sub-optimal soul-bind.

Yes, if you are a true heart-of-hearts min-maxxer, roll 2 DHs. If you only care about DPS’ing to farm content and you want to mostly play your tank for progression content, then you can just play 1.