Preserve some of the fun batching interactions!

yeah cause thats how the game should work /eyeroll

I’m not saying it should work like this. I’m saying what I can do with batching and wanted to know more about why Dot said it would hurt PVP.

I’m not sure if the sarcasm is aimed at me or not.

Double sheep has to be preserved or I quit.

Or the double charge in which each warrior replaces the other one in the map.

That kind of hilarious PvP interaction, that Blizzard specifically singled out when justifying batching, has to be reproduced somehow. Can’t have classic without two mages simultaneously sheeping each other then wandering around while praying for theirs to break last.

Can I have your stuff?

Sorry, my stuff is limited to whatever I farmed for this week’s Sapphiron wipes.

ive been playing paladin since day 1 and i heard about this in the first week being a thing. i never tried it. does this still work? what are the benefits? how is it done? i guess i could look up a youtube video.

again, i hear about this the first week. i tried it but couldnt manage to get it to work.

Batching IS playing the game properly.

Removing batching not only leads to a less-authentic classic experience, it also updates the existing balance of classes. For example it’s a large Rogue buff by making it easier for Rogues to reliably Vanish or drop combat and Restealth… that is a buff they do not need!

I’m not expert on the Alliance/Paladin side but as far as I understand is as followed.
Seal Twisting: Use a weapon swing timer addon preferably one that shows time remaining for your next swing. With a seal active on a mob at 0.4 or less remaining for your next swing cast your new seal on the mob, It doesn’t work all the time depending on the batch tick but you can relatively consistently gain the benefit of both seals on the target.

The Reckoning /sit macro is a quite a bit harder to pull off. The idea is that you get guaranteed crit by a mob if it hits you while you are sitting. You need a swing timer addon for mob swings for this one and you hit your /sit macro before the mob hits you. You can do the same thing to get enrage on warrior but the timing is pretty tough to pull off, as far as I know you want to be mid animation from standing -> sit to activate it, but it’s always felt pretty inconsitent.

So, spell reflect is one such example of things that can batch multiple spells if they hit at the same time instead of just one.

Changing that will be an indirect nerf to Warriors. Maybe that’s good, maybe that’s bad. There are many other things that will be impacted in pvp as well. There’s no way to really tell what the complete result will be.

I’d also guess that infrastructure becomes that much more important with regard to consistency in gameplay. Someone physically located closer to the servers will have a much more reliable experience than someone further. Higher batching windows, though not the intent, served somewhat as an equalizer to that.

Double sheep has to be preserved or I quit.

Or the double charge in which each warrior replaces the other one in the map.

That kind of hilarious PvP interaction, that Blizzard specifically singled out when justifying batching, has to be reproduced somehow. Can’t have classic without two mages simultaneously sheeping each other then wandering around while praying for theirs to break last.

Nah. The player who starts casting polymorph nearly half a second before the other player deserves to get his spell off.

He does get it off.

Batching was a crutch that was only there out of necessity during the early years of internet gaming. You better believe it wouldn’t have been there if this all started today and should have never been a thing. Purposefully making your game feel less responsive is horrible design.

Classic WoW isn’t a “modern game” and isn’t intended to be. Players have had 16 years to learn to play around the batching meta and develop strategies for it.

Changing batching now represents a radical departure that upsets the balance of classes and changes the established strategies for playing them.

Sounds like you don’t even understand what batching is, how it works, or what impact it has on the existing PvP meta.

Which applies to most of the ignorant mob of whiners and retail crybabies that have been calling for it be removed.

10ms batching will change the game a lot. I suspect that there will be a lot of whining and calls for it to be increased not long after it’s changed.

In before Ele shamans QQ to the moon that they cant global people any more.

You of all people Khlause should be very wary of this change.

For Rogues, this change has 2 major impacts:

Rogues are already PvP gods and this change means that not only are they less interesting, technical, and rewarding to play, now they are even stronger than before while requiring less effort.

You of all people should know better and I’m disappointed to see your tragic stance.

The one who gazes

10ms batching will change the game a lot. I suspect that there will be a lot of whining and calls for it to be increased not long after it’s changed.

I hope they get ignored. I’m tired of how bad it feels to just play the game. Even vendoring things is annoying.

“Even vendoring things is annoying” vs. “completely ruining the PvP meta and providing a massive buff to the classes which already dominate”

Hmmmm, I’m having a hard time picking which one of these things is worse??? 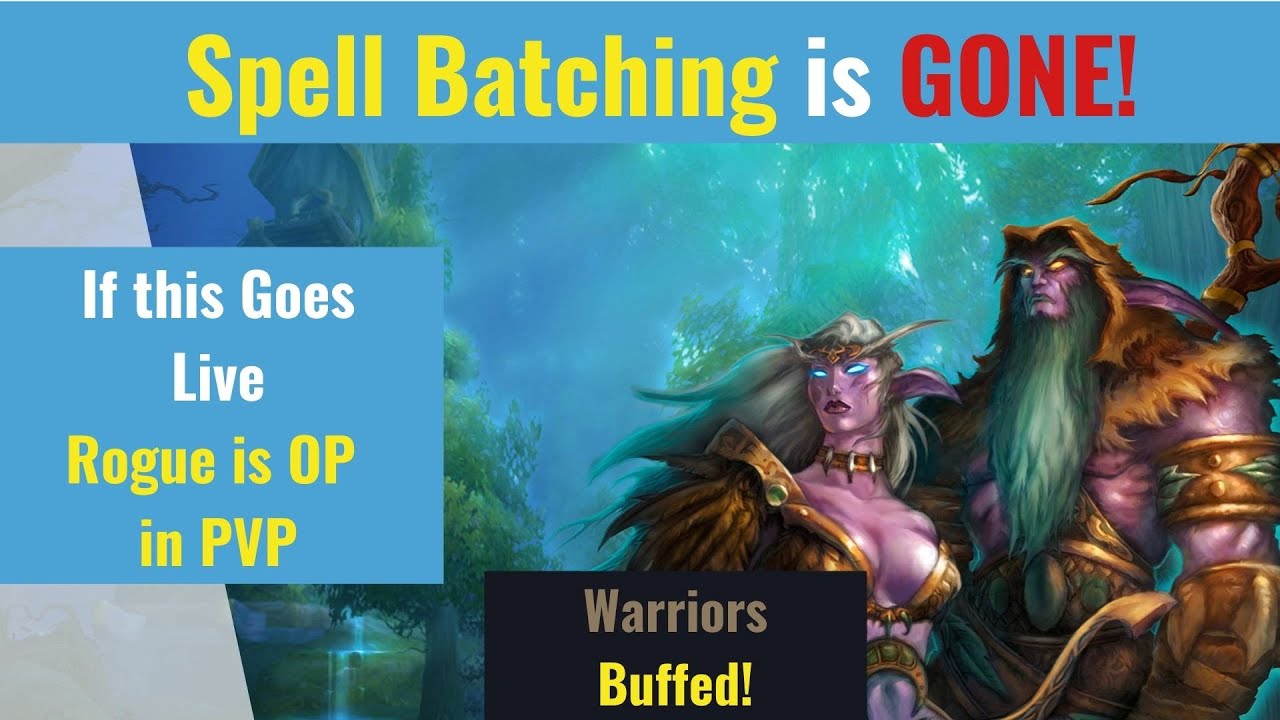