Notice of Warrant of Capture for: 'Haalmar' (RP) 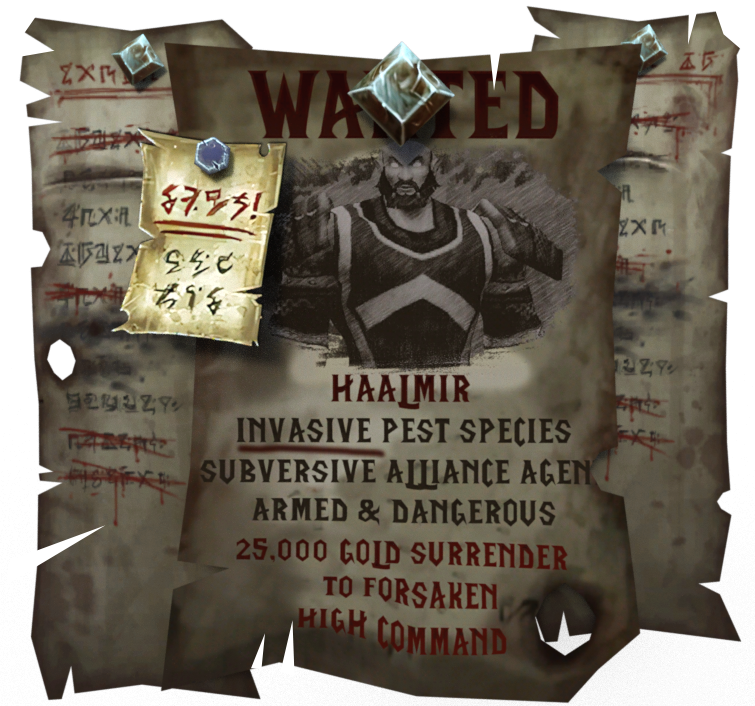 Notice of Warrant of Capture for: ‘Haalmar’
Issued by: Lordaeronian Bureau of Fish and Game
Authorized by: Gamekeeper William Coldgrave
Date of Issue: N/A

Notes: A highly aggressive and potentially partially domesticated organism that has likely off-world origins. It has been seen in cohabitation and cooperation with hostile powers explaining its dangerously unpredictable disposition. Please note that capture teams are not authorized to cull this specimen as it is required for our department for study and testing.

OOC DISCLAIMER: This is consensual rp, and all players involved agreed to this post. For ooc questions please feel free to contact Banshih or Haalmar. To coordinate rp regarding this warrant, please contact Banshih or Haalmar. This wanted poster can be found in Horde territories, as well as neutral locations like Booty Bay. Additionally, one or two posters would curiously find their way into Stormwind.

Haalmir wasn’t an overly smart man. Long-lived, sure. He had begun to lose track of just how many years he had spent tromping across various worlds. Thousands. At least ten thousand. In all that time, he had never really been one to ask questions or bother himself with the affairs of his betters. He knew his place - and it was to follow orders. That was the way of the Rangari.

Still, Haalmir knew his letters. The Kaarinos region wasn’t known for its great thinkers, and the little village of Evkanoru where Haalmir grew up was all but non-existent on the maps of Argus, far to the north, and far from the important aristocracy of Mac’Aree. Poor they were, yes, but good people. His parents did their best. His village, a small number of only a few dozen Eredar surviving among the frozen wastes of Mount Kanu, all rallied to raise each and every child born there. In a way, Haalmir was less a child of his parents, but a child of his entire village. Of course, his parents wanted the best for Haalmir. Their only son, he was their best hope of continuing their legacy, of bringing pride to their little village. And so he learned his letters, and learned to read. He had learned as a boy, been given a chance that most never had from a travelling Vindicator who was forced to winter in the village when the Long Snows fell, trapping her in the north until the Thaw. Haalmir never went away to school, never learned the secrets of architecture, or the ways of the prophets, or even a basic trade like the Astronomer’s Guild. No, he was trained as a Rangari, like his father, and his father before - taught the secrets of the wilderness, how to hunt, how to climb, how to be hidden in plain sight. He learned how to find food where there was none. He learned how to stay warm with no shelter. He never learned the mystical arts of the Paraxen’eros, never learned the sword like the Polemi’eros. But he knew his letters, which was more than most of the good people of Evkanoru could say.

And thus it was that Haalmir found himself scrutinizing this… poster. He was still trying to learn Common speech. His thoughts were much clearer and faster in Draenei, but he was slowly getting the hang of Common. From what he could understand, he was… what, being hunted? It looked like most bounty posters, just like the ones he himself had taken when he had first arrived on Azeroth. It was easy work - ‘hunt this, and we’ll give you money’. He soon learned what he was hunting - the Katarnei, the Damned Ones. They hardly even counted as people anymore. He could understand why the Vraechei with the flames on their chests wanted them out of their land. The Damned Ones weren’t unintelligent, but they were weak, the houses of their spirit crumbling around them. It was unnatural.

Haalmir was glad to do the work, to give them their final rest. He was glad to keep them from spreading across the north - the land was beautiful, it was a shame that the Damned Ones were ruining it. In a way, the land reminded him of his home on Argus. Quiet. Peaceful. Safe. The way the Katarnei were killing the land was so like the Man’ari spreading across Argus. The Katarnei were killing the Vraechei, and twisting them like they were twisted, cruelly denying them their passage to the next life.

He could remember the horrors on Argus. How the Man’ari came marching across the land, burning and killing and corrupting everywhere they went. He remembered how he had led the people of his little village south to Mac’Aree, trusting in the power of the Triumvirate to keep them safe. For weeks they survived on what little Haalmir could forage from the wilds of Argus, dodging the roving bands of Man’ari, creeping along in the night to escape the watchful eyes of their freakish demon allies. He remembered finally reaching Mac’Aree, and finding the great city he had always heard about under siege, finding so many of the people had turned traitor and joined the demons in a bid for power. The Prophet offered Haalmir and his people a way out. They were to board the Genedar while Haalmir and the other Rangari held the line.

And now came their reprisal for his actions. As if! He was more than a Rangari now. He was a battle-hardened soldier, with thousands of years of experience against much more terrifying threats than the Katarnei. Not to mention, he was a member of the King’s own army! Sure, it was a new position. Following his time as a wandering mercenary, he turned to what he knew best - following orders. But even as a regular footman, he knew what he was doing. He, more than anyone, was safe from the Katarnei.

Haalmir ripped the poster down, tore it into strips, and began wrapping minced Flushbloom in the parchment. He took a long, deep puff, and soon forgot about the poster and its ominous warning.

Ga’cha puts a little square of parchment as a little note, on the corner of the Orgrimmar notice board for all bounties: “Any mon wanting some ekstra divine suport on ya hunting, you let Ga’cha know. If ya cant find me, just call out my name at a blessed trashpile. Theres plenty in Dazar’alor.
-Ga’cha”
The last word is written in Jani purple ink. It seems as though a gremlin is looking to get some moolah, or collectibles.