Notice of Warrant of Arrest for: Erickson, Quintin (RP) 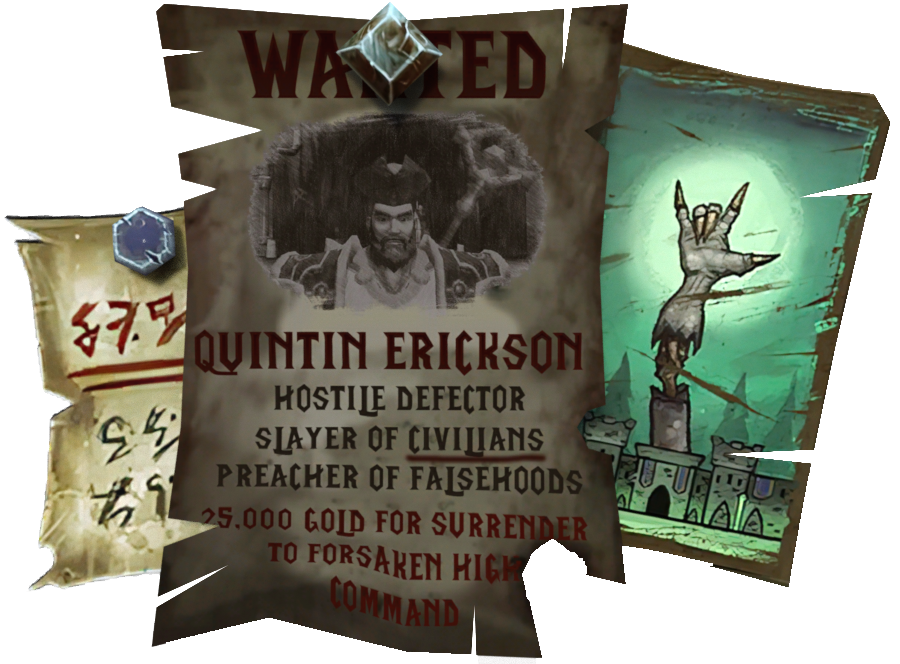 Notice of Warrant of Arrest for: Erickson, Quintin (Human)
Issued by: Lordaeronian Bureau of Justice and State Security Enforcement

Authorized by: REDACTED
Date of issue: REDACTED
Reward: Yes - to be paid upon delivery of detainee

Desired respiratory state: metabolically active (liquidation is not authorized for field teams, combat cannibalism is authorized in pursuit of target)

Crimes: This self-proclaimed imposter of the Light has conspired against the Crown of Lordaeron to mislead the faithful of the Light, and slaughter its citizens. Assaulting Lordaeronian officials enacting the people’s business, assaulting civilians engaged in the same, theft of sensitive information, unlawful entry into secure defense facilities, murder of Lordaeronian citizens, membership in the Scarlet Crusade, subversive activity against House Menethil, destruction of property, disruption of graves, unlawful entry into the national territory of Lordaeron.

Notes: An enemy of the people of Lordaeron and a member of the hyper-violent light extremist ‘Scarlet’ movement, this fugitive is sought in relation to a crime spree conducted over a recent period in and around Lordaeron and against the peerage. Using the disruption of Lordaeron’s defensive conflict against invading Southerners, Scarlet Cult Leader Quintin Erickson has inflicted carnage against unarmed, unresistant men and women due to their metabolic status. Individuals or teams engaging in the capture of this target may consider all present Scarlet zealots or fellow travelers surrounding Erickson to be immaterial to his procurement. A corollary addendum to this document pertaining to ancillary support protecting the subject contains reward tables for the donation of tissue and soul stuff as well as new recruits. Combat cannibalism is authorized in the procurement of this target.

OOC DISCLAIMER: This is consensual rp, and all players involved agreed to this post. For ooc questions please feel free to contact Banshih or Quintin. To coordinate rp regarding this warrant, please contact Banshih or Quintin. This wanted poster can be found in Horde territories, as well as neutral locations like Booty Bay. Additionally, one or two posters would curiously find their way into Stormwind.

The Orc General watched as the lanky Troll added a new poster to the notice board near the bottom of the wood. The Troll gave a nod to the commander before walking off. This prompted the General to lean down and gaze upon the paper, his left arm behind his back and his right arm holding a nearly empty cup of coffee. He would read the contents of the paper, thinking to himself as the bottom half hung off the end of the board, flapping from the slight breeze. The Orc would scoff as he mumbled something about ‘killing civilians’ before straightening himself up again giving the entire board another overall glance.

Jab’trah widened his eyes at the list of crimes, “Sheesh, even trolls would balk at disruption o’ graves. Truly dey ‘af no scruples left as men. I wonder wat da Forsaken want dem outside o’ a trial o’ death…” the Darkspear pondered before he shook his head.

He folded this particular bounty and put it away with the others, one last flyer of a warrant left to read through.

Already within his tent, Quintin let out a hefty sigh as he grasped his quill. Before him lay three different ink wells. One with red ink, one with black, and one with white. He eyed over the pile of wanted posters his acolytes had already procured from the surrounding area and simply shook his head.

“Light, you think they’d create a better penmanship than this.”

Suddenly, another acolyte burst in. Carrying three pamphlets, he set them down on his desk. Without a word said, the silent, obedient, slightly afraid acolyte seemed to scurry off. Probably for the best. Reaching over. Quintin finally dipped his quill into the red ink and crossed out the word ‘Civilians’ on the warrant. Above it, in his not-so-impressive handwriting he wrote: “Abominations”.

“As if undead even matter. This is like some child’s coloring page, I swear. Here I am having to fix their work.”

Looking over the words again he chuckled. Soon, he crossed out the word: ‘Falsehoods’. Above it, he happily wrote out ‘Providence’. Eyeing over the pamphlet he couldn’t help but draw two smiley faces by his own face. Just a bit of a zing to it. Then, he smirked at the gold count. Crossing out each zero, he soon left it at just twenty five gold. Forsaken were dumb, right? They wouldn’t tell the difference. He cleared his throat as he realized what he needed to do.

Reaching to dip his quill into the inkwell again, he soon wrote out at the very bottom: ‘Edited by Forsaken High Command’. That would do the trick. Setting the quill down, he let out a hefty sigh and smiled. He let the pamphlet dry before adding it to the pile of already edited pamphlets.

“Brother Carlton, please see that these are dispersed back to their locations. This should be fun.”

After Anderson arrive in front of the Dalaran library, he gazed at other posters. He spots a wanted poster, that familiar Priest he witness back then. Remembering other Paladins didn’t want him in the town, argued their light is right, and so forth. The abomination edit almost gave him a smirk. He isn’t sure who edited it but can find out. Prankster perhaps? Or one of the Crusaders? Or perhaps someone trying to paint the Crusaders bad? He does wonder if he killed Forsakens while he was out.

Upon looking back at Kaldoreis and Gilneans who spoke to him, their grieving grinded his mind as it reminds him of First War when Stormwind fell. He understands the life of the refugee as he was when he fled to the Land of Lordaeron. He has no sympathy. Knowing some Forsaken’s and Horde members deserved to be executed for their atrocities in War of the Thorn and Wrafthgate. He just slowly shakes his head, Saurfang should have been forgotten just like all war criminals, not heroes. The honor to Saurfang and the Orcs is conquering and violence. Because many of their clans live off of violence and killing other clans.

Anderson grabs the paper maybe he will see him in the future perhaps?

Overall he thinks this man is what Azeroth probably needs to decrease the Scourge count but will pay a great price in the end. Anderson can picture Quintin’s smile spread across his face as the ax chop his head off or other forms of execution, with no regrets. In the end, justice serves all whether it’s good intentions or not.