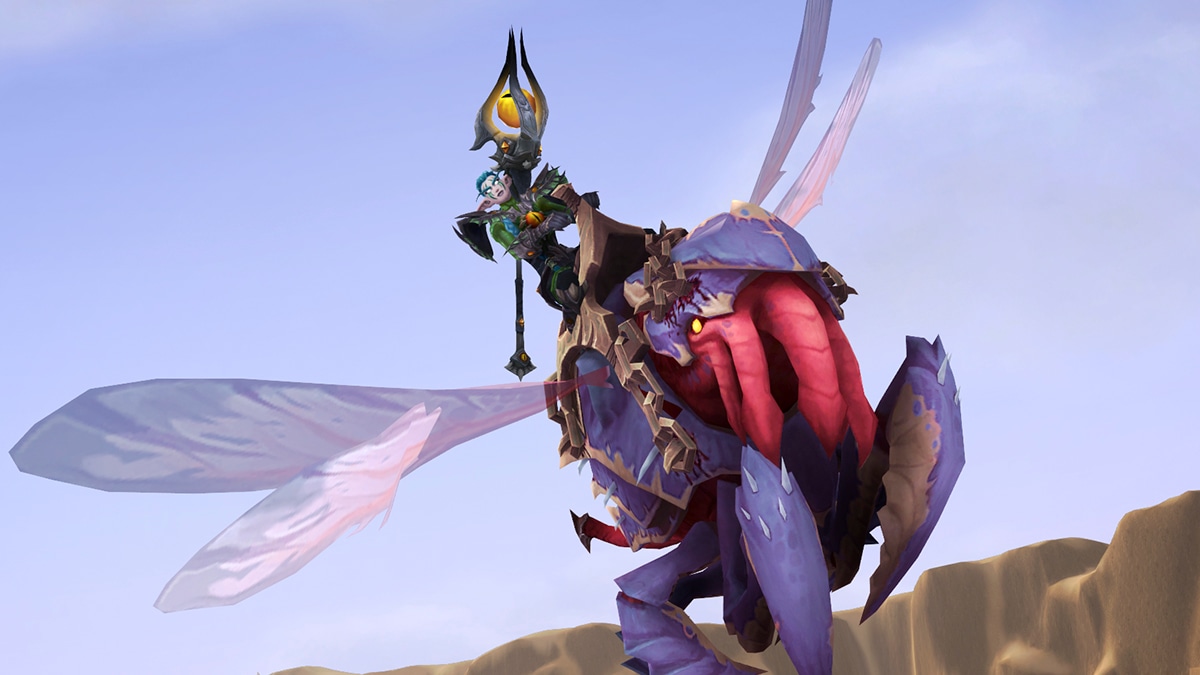 Visions of N’Zoth introduced a variety of new pets, mounts, and items ripe for collectors to hunt down among the twisted visions woven by the old god. We’ve highlighted some of them to point you in the right direction.

Stop doing vision after lvl 10…Cloak
So none

I will gladly murder Thrall and Alleria as many times as needed to get Cthulhu Bee.

Maybe even a few more times after that.

I already have all the assault mounts. Im currently working on getting the Black Serpent I may try a four mask sometime this week. l’ll slowly get the Mementos I need for Wicked Swarmer. Not to interested in the toys/pets atm.

Visions are odd. I mean… I do them on my main. To the point I got the achievement mount. And the backpack (my real goal).

After that… eh. My main’s cloak is 15 and I do the bare minimum each week to get the corruption increase. Switching to an alt (even a geared one like this lock) feels painful. And a full horrific vision run is LONG if you include the time it takes to farm the materials to do the damn thing.

As this relates to Torgast - don’t time gate this stuff. And don’t just have a single reward (e.g. one 470 item a week max and a few tiny bits of fluff to buy). Have a bunch of items a la islands (I can’t believe I’m saying this btw). And let us dive into the things whenever we want.

Also - and this is a big one - Visions is a cool idea but suffers badly from being so repetitive. It’s akin to the Chromie scenario but one you’re not meant to finish. The affixes aren’t varied enough so you tend to get hit by the same ones again and again. And all things are not equal across visions. Because it’s not new areas, storm wind is noticeably harder than Orgrimmar with a brutally punishing end boss for a lot of classes. And areas like the mage quarter are a navigational mess compared to, say, the horde versions.

Ultimately it was fun for a little bit but I’m kind of… done with it for now.

It’s OK to have some ultra rare things IMO like Love Rocket or Invincible but don’t make everything have a low drop rate.

Like I’m not gonna spend the next four weeks killing some rare all day on 12 alts. It doesn’t matter what it drops.

Are you asking so you will remove the best ones from the game after BFA like you always do Blizz?

Yeah, I’m not a fan of the rares only being up for three days every other week, and having an abysmal drop rate. Should be one or the other.

I want all the little pets… but as I don’t run visions I’m not sure I will ever get them. Unless they leave visions up so I can run them when they are easier for my senior citizen reflexes.

The only ones I’ve managed to get is the one off Ishak and the vision worm.

I don’t really care that much about pets (since I’m well over 1000 unique) or toys (since I have the mount) but I still need to get quite a few mounts. I have all the invasion drop mounts but for the rest I’ve been lazy and sidetrack with the exp buff. The ones I’m missing are:

We both do! Jarbek and I are both insane.

Haven’t done a vision in a month.

Maybe the true vision of N’zoth was the friends we made along the way.

Is it possible for a toon to be cursed?

Is there some bug (or feature

) hidden deep in the code of the game that makes boosted characters less likely to get the loot they want?

Yesterday I decided I was going to throw my enormous hoard of alts at this mount and start to seriously farm it. First toon that runs a vision gets it on their second mailbox. I was stunned.

I lost interest in doing them at whatever rank I am at now.

The drop rate of most of these things are under 1%, that is a hard nope for me.