Greetings, can someone please explain the connection between the titan-made mechagnomes and the playable mechagnomes? I like them both but want to know more about their history. I read the comic and have played and enjoy mechagon, but I like to understand the lore and connection surrounding races.

Can the playable mechagnomes be considered like the northrend ones? from my understanding they are regular, fleshy gnomes who wanted to revert to their original state, to be like their ancestors, but instead of reversing the curse of flesh they physically remove their entire limbs and attach non-titan made technology. I’m probably missing something here. They are cool and it’s good that the game has a robotic race - I do wish they were the northrend / titan made gnomes but this is good storytelling too as it evolves a separate civilization of regular, fleshy gnomes who wanted to revert and attempted to through their means.

The titan gnomes could have allowed the player to explore further lore and had us gain some more hints and insight into the origin of the planet and their role, meaning, opinions about things, etc.

Maybe it would be cool if the playable mechagnomes, which are regular gnomes who arrange themselves with the goal of becoming their ancestors, but through their own obtainable way instead of actually reversing the curse, that they visit / seek the guidance of real mechangonmes? Maybe have a few around who could help the playable mechagnomes with their conversion/reversions? The titanmade mechanognes might not see eye-to-eye with the methods being implemented , but it would be cool to see their opinion on the situation, and maybe lend, or refuse to lend their assistance.

Various gnomes have tried to undo the Curse in order to return their people to a more “perfect” form and resume their original programming as servants of the titan watchers and stewards of knowledge. Gearmaster Mechazod tried this in Borean Tundra, as well as King Mechagon in Kul Tiras. Mechazod, as a titan-forged mechagnome with access to the abundant titan technology lying around Northrend, had the ability to directly undo the curse and revert gnomes into their original mechagnome state. King Mechagon had to make-do with the resources he had in Kul Tiras, and he worked to “upgrade” his people into the mechagnomes through surgical enhancements and the gnomes’ own ingenuity. He may once have had good intentions for his people; however, he became single-minded and tyrannical in his quest to enforce “purity” and “flawlessness” at all costs.

As Prince Erazmin and the junker gnomes of the Rustbolt Resistance discovered, turning into a perfect machine is not all that it’s made out to be, and the Curse had some unintended benefits. While the Curse did make fleshy beings physically weaker and more susceptible to corruption, illness, and old age, it also gave them free will, individuality, creativity, and according to the Warcraft Chronicle, the “mortal qualities of necessity:” courage, resolve, and heroism.

So now the junker gnomes seek a balance between their machine and mortal selves. They upgrade their bodies with metal limbs and components that help to overcome the bad sides of the Curse, such as frailty and fatigue, but maintain the good parts of themselves, such as their emotions, personalities, and autonomy. I think this struggle for balance and freedom makes their story really compelling.

Like you, I really hope to see the junker gnomes meet and interact with Mimiron and his mechagnomes in the future. This could introduce more lore on the origins of gnomes and their purpose in the grand schemes of the titans. The junker gnomes revere Mimiron as their creator, so I would like them to finally meet him. I would also like to know what Mimiron thinks of his creations trying so hard to become like him. It could be really touching (although these are gnomes, so it would somehow probably be touching and zany at the same time).

Can’t thank you enough for taking the time to explain and clarify the stuff I was finding confusing or didn’t know! You’re the best and I feel more knowledgeable and excited about this unique race and their meaningful history. Every race in Warcraft is linked it seems, in some way, through creation, evolution, augmentation, etc. It’s cool the mechagon junker gnomes are long lost descendants of the gnomes of gnomeregan - who are now the fleshy gnomes who were once mechanical, now curse-affected after having gone to uldaman. I love how we can trace races backwards to their origins and also sideways along various paths that find them altered such as cursed, corrupted, re-origined, evolved/de-evolved, magic infused/enhanced/altered, or created by other races (saurok). Thanks again! gonna re read your kind post a bunch!

Welp, I just finished reading through the entire thread, comment by comment. It has taken me multiple days, but I’m finally done. I’m really happy about Mechagnomes being announced, and I am hyped to play one. I resubbed just to grind out the requirements, and I am now fully prepared for the 14th to play them. Can’t wait.

Well, it is currently 10 days until we get to unlock our Vulpera and MechaGnomes, and I’m getting more and more excited as it gets closer!

When Kul Tirans were released, I played around with a lowbie druid. I went to Duskwood, and the zone was absolutely packed with excited people leveling new Kul Tirans. People were helping each other quest, and the zone chat was full of enthusiastic conversation. It was the most alive that I have seen the open world in a long time, and I am looking forward to seeing the surge of mechagnomes out there as well. I will probably make a lowbie vulpera just to see the Barrens full again, too.

I don’t care if this is an unpopular opinion. I hate running 5-mans, heroic, mythic and otherwise. Literally loathe them. Races should be unlocked with REP, for cripes sake- THE END. We already had to jump thru annoying loops just to get to exalted, stop adding extra steps.

I actually disagree, the Mythic took me some time, yeah, but the mechanics are incredibly simple, all it amounts to for most of the bosses is just “don’t stand in AoE”, which, admittedly, is too much to ask from the simple minds of today’s WoW players, but oh well, it’s perfectly doable within a few hours.

I’m not particularly fond of having to do dungeons or raids, myself. It’s not really my cup of tea unless I can solo them. Most of the time I’ve done them, the random groups have been fine, but there have been a few times where the group became a trainwreck. Still, I’m glad Mechagon is becoming heroic so I can just queue up to get what I need done for MechaGnomes.

It is now one week until Vulpera and MechaGnomes come out. Getting closer and closer!

Will those of us who choose to stay unaltered get upgraded hair, like the mechagnome’s? I just cant get over their arms and legs hiding pants, boots, sleeves, and gloves. As someone who really enjoys putting together xmog sets, it’s sort of a deal breaker for me.

I am looking forward to seeing the surge of mechagnomes out there as well.

You’re a lovely optimist… but don’t exactly expect a surge. More like… a handful.

If the model viewer on WoWhead is accurate, many of the mogs for pants, boots, gloves, etc. actually have parts that show up over the robotic limbs. Like plate and mail leggings that have the 3D parts, for instance.

There is more mogging potential there than at first glance.

So far from all footage I’ve seen, their arms and legs are exposed. Makes them look like they’re wearing a diaper.

I don’t think that regular gnomes will get the exact same upgraded hair like the mechagnomes. However, more customization options are coming to all of the original races in Shadowlands, so regular gnomes might be getting some other new hairstyles later this year.

I’ve been hearing conflicting info regarding the criteria needed to unlock MechaGnomes and needing to have done at least part of it on an Alliance character in order to unlock them.

I’m not 100% sure if you can do everything on a Horde character or not, but I have seen a few threads mention you can get exalted with a Horde character, but you need an Alliance character to have done the quest chain that ends with you beating up King Mechagon, which it in of itself requires being revered. Again, not 100% on this.

If I happen to see anything definitive, I’ll be sure to post it here. I may test it myself, as both my Horde and Alliance mains are exalted and just need to beat up King Mechagon to get that achievement needed as the final unlock criteria.

Until we know for sure, if at all possible, I do advise people wanting to unlock MechaGnomes to do the criteria on an Alliance character just to be on the safe side.

Yeah, I’m a bit unsure now myself. The achievement you need to complete is called The Mechagonian Threat. According to the Wowhead link, this is the Horde version of the achievement. It seems that both factions have their own version because the intro quests differ to get to Mechagon. However, the final quest in the quest chain to earn the achievement for both Horde and Alliance is Operation Mechagon - The Mechoriginator, which appears to be available to both factions. You do need to be revered with the Rustbolt Resistance in order to get this final quest to defeat King Mechagon, which is why some people may not be able to see it.

Given that the Horde can reach exalted with the Rustbolt Resistance and complete the required achievement including the final quest to defeat King Mechagon, I don’t see why this wouldn’t count to unlock mechagnomes (with the exception of the actual recruitment quest chain). If I remember correctly, it worked in a similar way to unlock the Nightborne and other allied races with neutral reputations and quest chains. 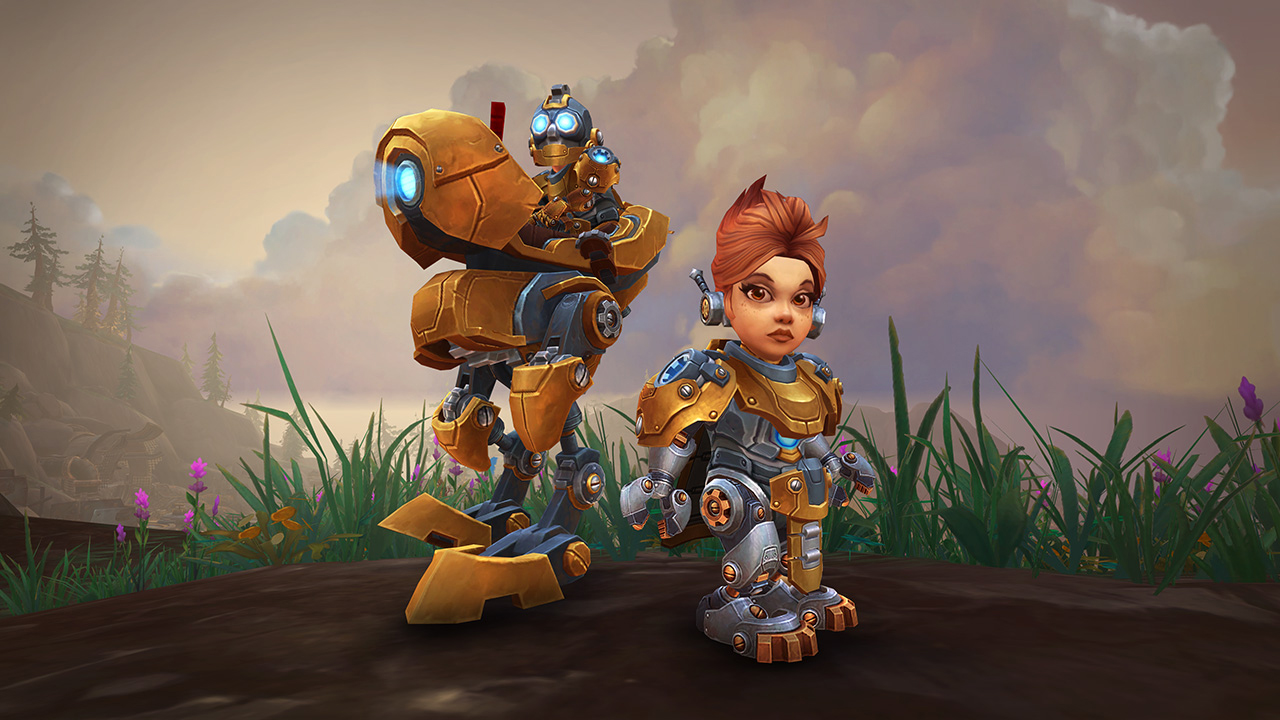 Everything about the Mechagnome Allied Race in Battle for Azeroth: how to unlock the race and Heritage Armor, their available classes and racial abilities, as well as customization options and jokes and flirts.

Considering how the other allied races worked, I don’t see why it would not count having done all the achievement criteria needed on a Horde character and then logging onto an Alliance character to do the unlock. Otherwise, it would really suck to have done all that work on a Horde character, find out some of it doesn’t count, and needing to get an Alliance character to max level and then at least revered to do the time-gated quest-line needed for the second criteria.

Seems like all we can do is wait to see what counts and what doesn’t on Tuesday.

This confirms that horde progress will count for the alliance allied race. Which I find to be bs personally as alliance cant do that for vulpera.

Sadly, if it turns out I need those achievements on an Alliance character, I will not be able to play a mechagnome for a long time, if ever.

I’ve spent about 3 hours a day in Mechagon on my Horde mage, and have the required achieves done almost five times over. I have a 120 Alliance rogue ready to go to do the unlock quest on patch day, but I doubt I’m ever going to take him to Mechagon to grind all that rep again.

Which I find to be bs personally as alliance cant do that for vulpera.

Except with Vulpera, you can get started on that as early as 110. Unlocking those is organic to the leveling process, whereas mechagon is a straight-up hard grind.