This game is a joke in it’s current form. Boring, unrewarding. Glad my sub ends soon.

No it isn’t please keep quite you don’t know what you are talking about.

I like to think I’m smart enough to identify the problem.

If you play a class/spec without a lot of burst, you’re at a significant disadvantage. There is no way to balance classes/specs when some specs can zero your health bar in under 2 seconds, it’s impossible to balance things unless everybody can do it or nobody can do it. 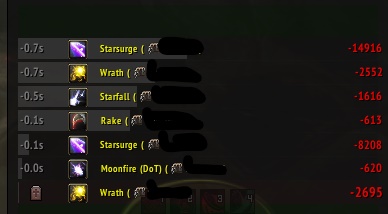 Everybody is going to be crying "NERF HIM!’ There are always calls for that, but it’s especially bad now because we have a burst meta. If you nerf those burst classes, then they are defenseless against other burst classes, and they complain “Now that you removed my burst, I don’t have anything going for me.”

Add to that the massive gear imbalances in PvP (which can be fixed with a item level cap on gear when engaged in PvP - eg 200-207), and the forums have become a whiny mess.

Scaling was introduced for a reason, and this is the reason. Blizzard didn’t plan on having a burst meta. They did virtually no PvP testing prior to release. It just happened because they just removed scaling for the new expansion (see the Stoopzz interview).

The second they removed scaling, I noticed it on my alts, and I started warning people this would happen (on the forums). I wish I could find all of those posts, but the beta forums don’t appear to be entirely searchable right now.

Of course, you could be right, and I could be wrong.

We will find out in time. These were all posted before SL was released:

You can’t choose to do easier content than fighting the (nearly) max geared duelist/glad/raider running around in BGs or skirmishes popping you in .5 seconds.

The New pvp system is incredible!

What WILL happen. Blizzard will reintroduce scaling to save the day. I hope you like that decision too.

If that is the case, then we are doing BfA all over again, but this time without PvP scaling to hide how easy it is to obliterate other players in non-rated content.

The New pvp system is incredible!

what is the point for a casual PvPer to participate in PvP if all they have to look forward to is slaughter by massive gear disadvantage?

A lot of people had enough foresight to identify this problem before it was a problem. Blizzard could have predicted it too had they given PvP a modicum of dev time - which they didn’t. Heck, they didn’t provide PvP forums until Stoopzz called them out on their gear itemization. Most people were never able to get a BG to pop in Beta. They could have tested in arenas, but they didn’t fix the broken PvP trinkets until 3 days before release. There was no way to test anything PvP until it was too late.

It’s not just unrated content that is a problem…

Rated BGs are often a disaster because you’ll have gladiator-geared enemy groups carrying one or two high-PVE geared people with a 0 rating, and it’s especially bad this week considering how turned off people are from M+ with the idiotic combination of affixes that Blizzard thought was a good idea.

The result? You can guess. Blizzard’s matchmaking flat out sucks.

Would love to see hpriest get some love, especially in M+… it does get tiresome being described as the “useless beginner healer.”

I’m noticing that the hotfixes buffed Kyrian companions that are unattainable, such as ispiron and bron.

Edit: I see Bron is recruitable at higher renown. Not sure how to recruit ispiron though.

Completing a layer on any character now unlocks that layer for all characters on the same WoW account who meet the requirements to enter Torghast.

How long is it going to take to fix all the key breaking bugs in M+? Literally every single dungeon has at least 1,most of them more. Stuff like DE OTHER SIDE MYTHRESH, SKY’S TALONS BUG which just happened to my group and cost us a timed 15 key. Or people falling through the world on Abom boss in Theater of Pain?

Anyone’s companions not getting healed after missions since this hotfix? Mine have been stuck at 0 health all day.

This in itself was making me want to scrap any alts…good change.

Can we just take a moment and compare the absurdity of these two changes?

Completing a layer on any character now unlocks that layer for all characters on the same WoW account who meet the requirements to enter Torghast.

we could say better late than never, but thats discounting the what? thousand soul ash other covenant/spec combos have had access to that others will never have (an issue fixed by making soul ash capped and farmable like conquest, instead of using it as an obvious FOMO device)

I agree with others the balance team priority list is bugged aswell. The adventure table comes at the end of the campaign, you know the one where you get to try out ~2 abilities and ~2 trash buttons per spec/class?

yes balancing all covenants to all class/specs is daunting, but it feels like devs/blizz/YOUGUYS don’t believe “the grind is worth it” which is obviously jarring considering the game we play.

so yeah wtb “480?+ soul ash has been given to all characters lvl 60 before december 25, sorry for balance”

Here are today’s hotfixes and the hotfixes coming with this week’s maintenance.

Dang it. Was hoping for more than 3% for Arms.

Chillstreak nerf… are you kidding me?!?