Back then, horde didnt have these absurd que times

Back then, people didn’t mindlessly bandwagon a faction for racials and server disparity abuse.

I didn’t personally spend any Honor in original TBC until at least patch 2.3, because my raid gear was fulsome for my PvP purposes the first year of TBC.

The lv70 PvP gear early on was not worth the effort for PvP even. I would even go as far to say the level 60 PvP gear was more meaningful in hindsight. But in season 2 and more notably season 3 the gear gap started to mean something. After you spend honor on purple offset pieces, you stockpile till season 2. Save arena points for season 2 also.

The lv70 PvP gear early on was not worth the effort for PvP even. I would even go as far to say the level 60 PvP gear was more meaningful in hindsight. But in season 2 and more notably season 3 the gear gap started to mean something. After you spend honor on purple offset pieces, you stockpile till season 2. Save arena points for season 2 also.

This is what I’ve come to. Season 1 is an absolute wash.

Sounds like we should just jump to that now.

There you have it folks. Honor is accurate.

Thanks for the clarification Kaivax. Thanks for all the work you and the rest of Blizzard have put into TBC classic.

A terrible mistake in design choice. Using your honor now is a big mistake. Save it until later. Especially considering how terrible it is to farm honor right now for a casual player. Spending honor now would be a big big mistake.

Gloves and medallion folks, all you need

Well me and many others will quit.

A terrible mistake in design choice.

Please address whether the team is looking at the current problem with farming the honor gear from Battlegrounds. It is currently taking over 300 hours of estimated played time for people just to farm this entry level set of half blue gear with it costing over 180,000 total honor (over 200k if also getting a weapon) with people averaging only 300-500 honor an hour and even worse depending on queue times and winrate.

This will be lost in the sea of tears but I think blizz is doing a great job right now not caving in to crybabies. Keep up the good work.

Let them go. Getting sick of the crying at every turn.

Kaivax’s response isn’t misleading, but I feel like people are going to interpret this wrong. The older gear from past seasons drops in price as the seasons progress, but a NEW set of offset pieces comes out every season for neck/cape/wrist/belt/boots/rings and those stay at the same high price that currently exists. Once you hit season 3, the season 1 gladiator set replaces the current blue set as the catch up gear, and stays at the current prices that exist. Hell, it even gets worse to be honest because Battlemaster trinkets come out and they cost 35,000 honor a pop which at current honor rates would take a player anywhere between 60-100 hours of farming depending on winrate and queue time just for that one item.

If that discount increases on the previous seasons at the end of each season it might help explain why people remember farming far more of the blue set, perhaps they were playing in S3 and farmed the blue set for cheaper?

That is certainly the case for me and my memories. I didn’t personally spend any Honor in original TBC until at least patch 2.3, because my raid gear was fulsome for my PvP purposes the first year of TBC.

Nobody in season 3 was farming the blue set to prepare for entry into PvP. They were farming the season 1 Gladiator gear which was changed to honor currency from arena points to serve as the catch up/starter gear.

I sincerely hope the team internally is discussing the current honor rates at length to come up with a solution, as this current situation is just so bad. A starter set of PvP gear that prepares a player to compete in Arena shouldn’t take 10x the amount of time investment to farm as a PvE players starter set to perform in a Raid.

Could you also confirm that the honor from kills in level 70 vs 70 PvP combat was normalized to 20.9 from the very beginning of original TBC? No matter how many screenshots I link from youtube videos uploaded during season 1 or 2 of original TBC, I can’t seem to stop people from misleading others into believing that original Vanilla ranks would increase honor gain from kills.

When ranks got normalized for honor

Which was when the original TBC pre-patch released. As I’ve said before, the one video you’ve linked showing rank contributing to honor was likely a display issue, or a bug affecting a small number of players. The fact of the matter is this: 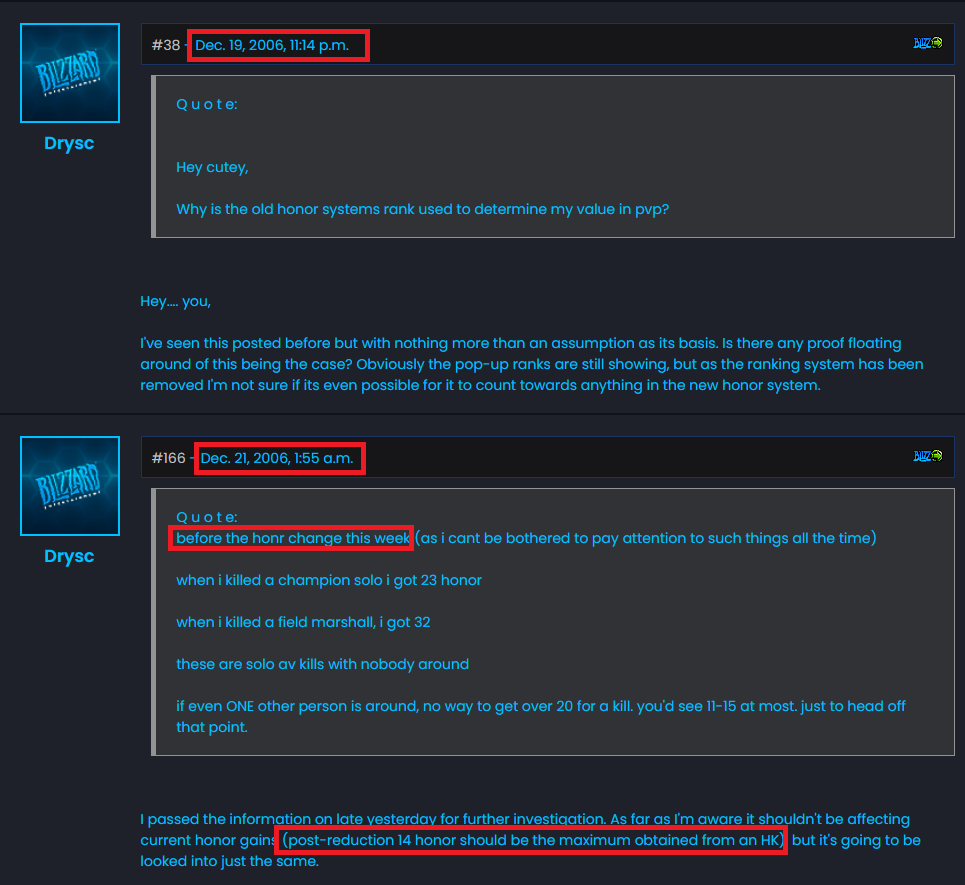 Has the team considered that removing the flag cap honor from EOTS (true to expected end of TBC behavior) is a bit rough considering we’re stuck farming the increased honor with decreased means of obtaining said honor?

Increase the honor gains to what they were in prepatch with the 2x buff at a miniumum, realistically 4x would make the pvp gear reasonably obtainable without having to spend 4 months to obtain the basic gear. Full pvp set is over 200k honor and honor per hour is less than 500 for the majority of players, 400 hours of straight bgs is insanity. Fix the game. Thank You

I think the memory we remember is farming s1/s2 gear, by the time it was available for honor it was 40% cheaper then now

Maybe push that discount to live now? I’ve got two friends who are going to quit in a week or so if it’s not changed. They only came back to play arena, and it’s just not going to happen with that honor grind

much like vanilla, people’s memories of early tbc is slim and they remember late stage TBC with cheaper pvp gear