It’s pretty obvious Guardian Druids have been the least iterated tank of the lot. Thats reason enough to garner frustration over the state of the spec. But the point of this post is- is anyone excited for the possibilities?

Ive been combing over the talents for weeks now and I can’t help but see a really strong build that combines the galaxy bear damage and healing plus incarnation God mode.

Is the build simple? Yes. Is it boring? That’s subjective.
Does it seem strong? Absolutely. The fact that the self healing of moonfire is so overturned that at times the bear is out healing the healer is already problematic enough. But than slapping a frenzied Regen and possible nature’s vigil on top of it? I mean come on the HPS sustain is through the roof.

Than there’s of course barkskin and survival. Fairly mediocre, but still decent cds that serve one purpose: keep you alive until the next God mode window is up.

I think with the new CDR for incarn, guardian druid just shot up in value. Since incarn is bugged no one can be sure how much CDR we can shave off right now, but the amount of rage spent for a second off seems huge. I cannot wait to see how much we can get the icarn cd down to.

To take it further, I’ve never been excited about Bristling Fur. But now that talent pairs so well with incarn CDR. Pop that bad boy in a pack of 2 or so and just swim in rage and watch that CDR kick into overdrive.

So yeah, maybe I’m way off base, but as of right now. I actually like what I see. It’s probably boring to play for most, but that’s fine, not all of the tanks have to be flashy or dynamic. I think bear has a potential to be strong in DF. Maybe not meta, but I don’t think they’ll be dumpster tier.

I havent tried it at lvl70 in beta, but i have at lvl60 dungeons. I am not sure how you find the moonrfire healing to be overtuned since its at about 100 heal per tick…with my health being 163K its not all that impressive.

Is this a trollpost or does the healing from moonfire shoot through the roof at 70?

Not trolling at all. I’ve watched some people’s videos of beta. They posted both their dos and hps meters and the numbers are busted. 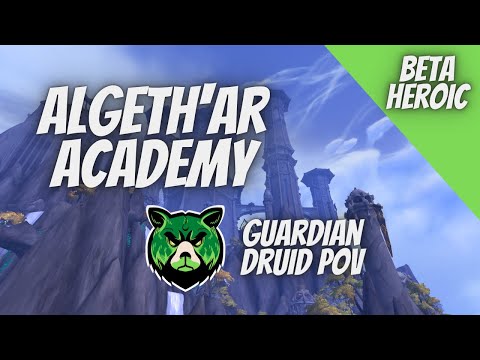 Heres an example of a whole run. Watch the hps at any given pull and see how high it gets.

Hm im guessing tank is only one taking dmg and absorb shield counts as healing. Ursocs Fury proc chanse being upped to 20% also.

Dmg is decent not super, but considering the weak utility of bears compared to other tanks going into DF a bear needs to be top dps/hps tank to compete.

the 30% healing is actually pretty good. doing the 340 lvl70 base toons, I have MF hitting for 30k crits, per target in twin moonfires. That’s 20k for the auto proc, and maybe another 20k when I consume the proc portion.

I ran it without ursoc and its pretty significant. But if you run ursoc + untamed, the Ursoc shield becomes 75% of my healing, and 80% of the arcane healing is counted as overhealing.

I ran it without ursoc and its pretty significant. But if you run ursoc + untamed, the Ursoc shield becomes 75% of my healing, and 80% of the arcane healing is counted as overhealing.

Imagine if bears got a talent to convert 50% of overhealing to themselves into shielding… and also allow Leech to work at 100% health so that can be a source of shields too.

Ya certain things are nice aka the whole moonfire bit too make moonfire feel fun to use again, but man they need too actually bring back the first version of the tree. The first version felt properly thought out and was designed with care too what bears enjoy, this junk is just sad right now.

It is true that most of the “healing” on the meter is the absorb from UF. However, the healing from MF is nothing to scoff at. I will say that for this video I did not go into resto for Natural Recovery. Adding that extra 3%/6% healing to MF healing from Elune’s Favored could be big while waiting for incarn to be back up.

I will say that I’m not happy with the guardian tree and I echo a lot of the statements that have been said numerous times here. Bear won’t be any stronger than it has been in SL. In fact it will play the same so if you like the 3 min playstyle we have now then you’ll love DF bear.

Wouldn’t it be 6.09%/12.36%, since Natural Recovery increases both healing done AND taken? Assuming both bonuses are multiplicative with each other, anyway.

yes. I misspoke there.

Heres an example of a whole run. Watch the hps at any given pull and see how high it gets.

Worth noting, no tuning has been done yet. The numbers are gonna get adjusted. It makes it pretty tough to tell where the spec will land on meters, but what people should pay attention to is gameplay.

Laser bear seems fun and different. Not sure I love the general druid tree or the guardian tree overall, but it’s at least playable and I’m sure we could still do keys. As is, unless our tuning stays insane we won’t be a meta tank. Other tanks are just gaining way too much while already being meta, and we’re simply not gaining much while already having a lackluster kit.

But we are at least totally funtional

I’m fine with it. I know the specs talent tree is going to get worked on a fair bit during the expansion anyway. I wouldn’t be surprised if it was the first one worked on after they get the kinks working out properly. I’d rather they take their time to make some kind of attempt to make guardian players happy than pull a Steve Danuser at the last minute and it be hot garbage. To me guardian is just one of those feel good specs. It doesn’t need to be complicated to be fun.

Bear won’t be any stronger than it has been in SL. In fact it will play the same so if you like the 3 min playstyle we have now then you’ll love DF bear.

I don’t think this is true. With the addition of CDR per rage spent to incarn, the 3 minute playstyle already is changed. But in between pulls you can now weave in mf dotting to help alleviate survivability whilst doing damage.

Has anyone tried the Maul crit build?

The synergy between vicious cycle, tooth and claw, vulnerable flesh and ursocs fury seems like it has potential to create some sizable shields often. This play style seems fun and new, but I guess it all depends on mauls base damage output.

We had huge CDR in s3 of SL with the seasonal affix. It by no means made us super strong, but rather made dungeons smoother overall. I don’t think the 2 sec CDR every ironfur/maul you use is going to be as big as the season 3 affix. It will help reduce the time we spend waddling around waiting for incarn to be back up though and that in itself is worth taking if blizz is going to stay with this tree.

Little bit, but that isn’t saying much since I was over this exp a tier ago. Still, watched a few vids, laserbear looks fun I guess. I will be swapping my main to a Druid, probably tank M+s with.

We had huge CDR in s3 of SL with the seasonal affix. It by no means made us super strong, but rather made dungeons smoother overall. I don’t think the 2 sec CDR every ironfur/maul you use is going to be as big as the season 3 affix. It will help reduce the time we spend waddling around waiting for incarn to be back up though and that in itself is worth taking if blizz is going to stay with this tree.

Removing ravenous frenzy can help them put us in a much healthier place as a class though. Really, venthyr had a HUGE amount to do with why they couldn’t give us nicer things. Bear really doesn’t need a ton to be in a really good spot. I think most people’s complaints are that we don’t have a lot of options to survive/mitigate magic damage.

I also think our class tree changes, which I keep hearing are on their way even despite the recent post that they are tuning focused now, will give guardian and the other specs a HUGE boost in how they could feel. We might get the prot warrior treatment and suddenly be a tanking class with an amazing feel to our playstyle

Just been a druid main since vanilla. We’ve had a lot of different play styles, different levels of viability. We went from being “Only resto is good at all and only for innervate” to sometimes having a spec be top in the meta while all the others are totally viable.

If you like how druid plays, then you’re probably going to play it every xpac even when it’s not always on top. If you enjoy the feeling of being an “OP Meta pick” you will always be able to gear up and play one of those too.

If you expect the class you like to play to also always be near the top of the meta, you’ll be sad most of the time. If you can separate the two, you’ll relax and appreciate your favorite class for what it is.