Please change it blizzard.shamans looking great but please that animation is so bad

Duit, Blizzard, I dare you

All seriousness, LB and CL need an animation revamp bad

Enhance should not put there weapons away at any time. Please alter the animation of lightning bolt, shocks, ele blast, and now lavaburst for enh please

Ya’ll don’t remember the days when we shot out the little blue derpball o’doom.

The bug zapper animation is a pretty big improvement lol.

This expansion especially patch is the perfect opportunity for a shaman only legendary and a class quest to alter how certain spells look like the warlock green fire quest.

Talent trees have exceeded my wildest expectations now just blow our minds away with these 2 things and all the shaman abuse since MOP will be forgiven.

Since mop? Shaman have been abused since the bus shock.

Ya’ll don’t remember the days when we shot out the little blue derpball o’doom.

The bug zapper animation is a pretty big improvement lol.

I remember this and was a little surprised to see complaints about the animation. It’s definitely no chain lightning animation, but I think it’s better than it used to be.

Alternatively, is there a good reason they can’t just remove Lightning Bolt, then buff the initial damage on Chain Lightning to what Lightning Bolt currently does for damage?

Leveling up a darkspear troll today.
In the intro island, the troll that assists you gets to use the updated, high res darkshore lightning bolt animation. So jealous.

The current animation for LB is a 2D flat ribbon that looks like it was drawn in MSPaint. Especially if you move the camera behind your character. The sound and impact is amazing though.

In fact, every single lightning animation in the game looks better than retail LB. Including all the lighting animations from all sources in Classic. I don’t want to go back to the ball animation from classic though lol.

I agree, please Blizzard introduce glyphs for alternate ability textures. I know there are some but more!

Yes Lightning bolt 100% needs to change from the current form we have, but please don’t forget core races totems… they are even more outdated and look vastly worse… so update Totems and Lightning Bolt please Blizzard!.

There are heaps of animations that X-Men Storm does (from ‘The Original Series’ cartoon), that have her raising both arms, bolts go from her arms all the way up, then forward. Or her whole body charges up and they shoot from her body.

I could imagine a big power up for a lightening CD. Would love this for rSham.

The animation changed I believe in Legion? The original Lightning Bolt had a travel time and was derpy. This animation is instant which most filler spells are not. Could LB and CL update their animations? Sure it’s starting to age but right now it’s not too bad.

The original Lightning Bolt had a travel time and was derpy.

Yeah, travel time did not work IMO. I thought the change from the vanilla animation happened before legion didn’t it?. In fact, I think there was a newer version in a legion Beta that was never implemented.

EDIT: Yeah, check this out: 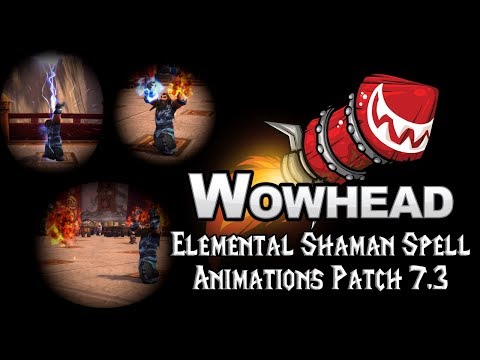 3:55 in that vid for the LB PTR animation that never was implemented.

Current CL is really fine, but the 2D LB animation really does not fit in the game anymore.

I’m not sure why we don’t use the Death Knight Howling Blast animation or the Blood Boil animation, and have the lightning start just off of the weapon model. Just lift your MH weapon and watch the lightning strike the target from the sky. There’s no reason this can’t be the base animation for casting LB/CL across the board. It would just look good (at least in my head it would). For Lava Burst and Elemental Blast, the spell could come off the weapon instead, and still use that animation. Alternatively, steal the M+ volcano animation for Lava/EB with the weapon raise.

Not only would this be great looking, it would be reminiscent of Thrall in WC3, where he raises his hammer to call down lightning.

As it stands, shocks/heals/wind shear don’t bother me in their current formats.

I agree that the DK animation for howling blast is amazing. It’s very iconic Lich King though.

Weapon based spell animations would be cool though, for all spell casters. I wonder if the difficulty in implementing it for all weapon types might make it too much effort?

As for Lava Burst and ele blast, I hope those never change, they are by far my favourite animations shamans have.

Valid on the animation being iconic to LK. Mostly, I was thinking that it’s a great animation that’s essentially in-game already, and ripe for reuse. The major difference would be the target spell effect. Instead of frost spreading out, lightning coming down from the sky… I don’t think it would take anything from DKs, but would certainly look good for us

Instead of frost spreading out, lightning coming down from the sky

That could pair well with the animations used in legion when powering up you artifact weapons actually. Where we point them up to the sky…

As for weapon spell animations, I don’t think it would be that challenging to add. There are effectively 4-5 animations that would be needed, and most of the math for those animations are in-game already. “Charge” the weapon by applying an effect similar to a weapon enchant glow. Move the weapon. Either call the spell effect down from above/below or have it come from the weapon. Fade the glow. I’m pretty sure the weapon tip/edge is already stored with model information for everything in game, but could be wrong.

While it would be cool to have the energy course up the weapon, that would require a ton more work than a glow plus the spell effect leaving the tip or coming up/down at the target.