GD is a cesspool of nothing but complaints. And it’s not a majority of players.

Most people with complaints don’t bother to complain about it, when their experience gets bad enough, they just go find another game to play. When I taught customer relations, the statistic we used was 46% of unhappy customers complain and 54% won’t bother because they either don’t care enough about the business to complain, or they don’t think the business would do anything about it if they did complain.

While some of GD are trolls, who just enjoy trolling, some of GD is made up of people who love this game and really would like to see something done to make it better.

While some of GD are trolls, who just enjoy trolling, some of GD is made up of people who love this game and really would like to see something done to make it better.

And I never said to the contrary! My point was that Blizzard doesn’t look to us to get things fixed, because that outraged vocal minority that just likes to scream and rage around here cancels out those who actually have good constructive feedback that needs to be seen. It’s honestly why I urge people to both post their feedback here and also write it into an in game suggestion, hoping that someone may actually see it.

Wishful thinking? Probably. Because I often wonder how many people still work there.

Accolonn should be on the council. 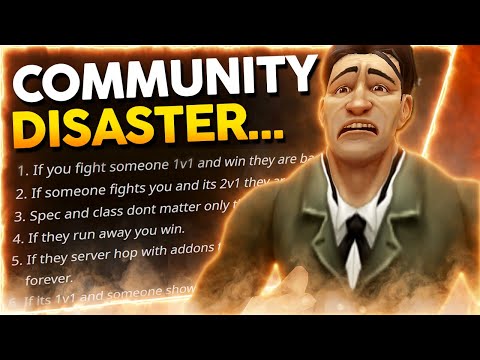 I’ve yet to see all the Council members post on the forum (or all the members being invited in the first place), I think what matters most is if they are able to reflect the thoughts of their represented communities in a well formatted, dense and easy to understand manner.

Yes, the problem is you have a situation where people on the CC are posting in threads that they didn’t get elected for in the first place. You were picked for PvP right? Why are you making threads about why people are quitting Mythic raiding and PvE gear progression ? Shouldn’t you leave that topic to be breached by the people who were, you know, selected for their mythic raiding credentials?

Do you feel like you need to be the voice for everyone about every topic? Because Blizzard has had that on the forums for over 17 years, I’m not sure why the CC has already turned into General Discussion 2.0 with a significantly diminshed pool of people to gain input from.

Blizzard should have flagged players what they were elected for and only allowed their input in topics that directly relates to them. The entire CC so far comes off like a weird clique. A thread about a 4th spec for Shaman that nobody asked for, lmfao - Wow thanks to the person who made that thread very important to the improvement of the game for sure.

Oh nevermind, I think i got my answer what Prosident felt the need to make 20 threads in 3 days on every possible subject he could think, yikes oh mighty.

I think calling it elaborate is a bit too generous, it’s not much more than a glorified VIP sub-forum where the usual suspects (streamers, 1% types, Blizzard family+friends) can post sanitized versions of what we’ve been talking about here for years.

Sounds harsh but that’s just how it seems so far, i’ll cross my fingers and hope it becomes more, but Blizzard hasn’t done a lot to deserve my faith in recent years.

I don’t think any of them can be called streamers, the DK guy streams but is tiny.

There are two people that raid at the competitive level (WR200+) and nobody would announce if they are F/F.

well especially since they selected a community council those individuals like what they like and play how blizzard wants people to play - they just made an echo chamber. And yes I know minor complaints as always but no one is going to suggest something major.

there are streamers in there - some of those people from europe stream and I am rather doubtful you know who all the streamers are by their armories if they are posting on alt characters.

There’s at least one long time GD poster over there that everyone really liked from years ago.

I don’t know of anyone who ‘everyone’ really liked. I am guessing this means you liked them.

You were picked for PvP right?

I wasn’t picked for anything other than being able to offer valuable insight for stuff. I’ve done a LOT of variety content in the game (which is something I said I did in my introduction post in here, including my application), I just happened to do PvP the most, since it’s more accessible than waiting for a week for the raid to reset.

Why are you making threads about why people are quitting Mythic raiding and PvE gear progression ?

Because I’ve done quite a bit of PvE even on this account (even if not much raiding at all), and I happen to keep track on the PvE community, to see what they think of the game.

Shouldn’t you leave that topic to be breached by the people who were, you know, selected for their mythic raiding credentials?

If it’s any consolation, I used to do 10man HC raiding back in the day, quite competitively actually. So, I would say I have credentials when it comes to the reasons as to why I personally stopped doing PvE, which has to do with how much they screwed up progression and the removal of 10man.

Also, it’s worth to hear from the people who have quit (the game), to see where player retention fails.

Do you feel like you need to be the voice for everyone about every topic?

I’m going to talk about stuff that I know I have an understanding of. I’m not going to represent a community that I know I know nothing of. If I wanted to post about anything, I would have just made a post about Nightborne customization and run off with my internet points.

Blizzard should have flagged players what they were elected for and only allowed their input in topics that directly relates to them.

The CC shouldn’t exist in the first place, they already have tons of feedback to work with. Maybe their intentions are true at this point and they actually need the CC to act as a filter of sorts because they have no idea how to continue the game - but how the CC is optimal for them is still something we don’t know.

eyyyy I got a lot more since

I think Stoopz is giving them way too much credit. I think they know something is wrong, but they are still figuring the problem is the players, who will come around if they stick to their guns long enough. All they have to do is keep turning the screws and soon enough many millions will come back, credit cards in hand, begging for the opportunity to do those things they left because they couldn’t stand them.

Linking me in any of the Threads also works because i get an notification about it.

Thought I’d go out on a limb and reach out.

Could the customization and playable race threads be looked into?

There’s a lot of passion and effort from the community for those aspects of the game and a lot of us are currently feeling pretty discouraged. Particularly on the playable/allied race end.

Some popular threads are:

Would greatly appreciate it.

And also, this line right above it:

“Also, upvote me on the forums i need internet points”

I don’t know of anyone who ‘everyone’ really liked. I am guessing this means you liked them.

Same, who is this supposed GD’er that “everyone” likes?

I don’t see a single prominent GD’er on the CC board.

Just at a quick glance it looks like half of the board is level 10s/alts of EU players. And other than Bluster I’ve never heard of any of these other CC members that Blizzard picked.

The game is exactly how Blizzard has designed it for a reason.

A Community Council is not going to change anything.

Just at a quick glance it looks like half of the board is level 10’s/alts of EU players. And other than Bluster I’ve never heard of any of these other CC members that Blizzard picked.

I don’t consider that a bad thing. I don’t know anyone either, so far.

So far we have a lot of variety and I am happy they have a decent group from the EU involved too. I am curious to see what the other 2/3s of the council looks like once they invite them.

I don’t see a single prominent GD’er on the CC board.

I did not either…but I don’t have all GD memorized.

What I am hoping for, is that this gets them to publicly discuss their thoughts on the various ideas. Even if that means telling us finally why they don’t think X fits the game direction, or telling us that something like Y would be next expansion, or the one after that. They are already well into the next expansion I am sure, esp from the story and game system design side.

I like your optimism, but I don’t see this happening. As best I can tell the CC exists so they can focus their attention in one place rather than reading everything. It’s an optimization for them so they can say “but we listened!!” when things go sideways as a way of justifying ignoring the issues later. Thus I have zero hope for it right now as I don’t see as being done in good faith or for the actual purpose of interaction. Thus far they just haven’t posted there really other than the seed threads.

Thus it’s hard to believe at this time that it’s actually a good faith move even if it is intended as such. Particularly since we know that the Devs have a very strict muzzle clause on them now by marketing. So even if they wanted to, they may not be able to respond without it going through multiple approvals that could prevent them from communicating freely.

If they want to show good faith on this then they need to start responding and asking questions in the threads.

Yes indeedy, it always made sense to give a voice to all the streamers who already had a voice.

I have seen some of your posts over there and you appear to be one of the most passionate people I have seen so far.