Can we exterminate the Horde

And call it morally gray? I think it’s only fair.

Uh no, but you’re welcome to join us

I love how people still keep twisting the “morally gray” thing that doesn’t even exist anywhere except in clickbait videos and GD’s heads.

“Azeroth is a world of gray. It’s never been black or white.”

In reference to speaking about how both sides should be concerned with what’s happening in BfA, while explaining that the races of the Horde don’t always see eye to eye. 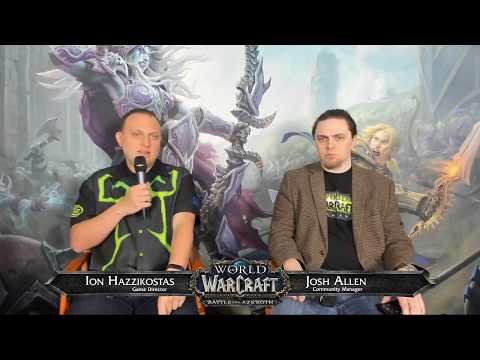 Nope. That’s not how this works.

I mean, I think it’d be against your interests. At the rate we’re going you only have to wait an expansion or two and the Horde leadership will be more pro-Alliance than your own leaders.

Try to exterminate me and I’ll turn you morally black and blue!

The only last vestige of hope is Lorthamar and sylvanas before they made her all mopey and regretful.

You would want to toast my buns? I thought we had a thing Dianasky.

Ya can tries to eliminate me.

And see the gleam of a giant heckin’ axe.

You’re allowed to join me for dinner.

I think the mechagnomes can come up with something to help with this.

Unfortunately every time the Alliance gets into a conflict, our leaders forget basic military strategy.

Such as “if you’re going to siege the capital city of the people known for having the plague as a bioweapon, don’t be utterly unprepared for the plague being used”.

Then again maybe that’s what we get for apparently letting the kid with no battlefield experience who hates fighting lead our military.

No op. Not happening. Get over it

Then again maybe that’s what we get for apparently letting the kid with no battlefield experience who hates fighting lead our military.

Too bad we didnt have a strong independent powerful woman with 10,000 years of battlefield experience who could take over and maybe even be written properly.

Mechagnomes can’t even takes off their diapers.

I ain’t expectin’ much else.

Well Sylvanas sure put on a show of being sad and mopey. And it worked.

Bone head Tyrande ordered Sylvanas to jump right back into her briar patch all the way down to her condo in Torghast where she can link up with her rangers and the Manswarn.

With the Jailor gone that makes her Warchief of the Damned.