Allied Race "Leak": Could it be Sethrak?

they are darn cute. havent seen a female tho.

Sethrak does not have to be an Alliance race, the Alliance needs a cool non-human race, but it does not specifically need to be sethrak that currently has closer ties to the Horde.

Why does it have to be always the Horde to get the best races? Let them have something good as well, otherwise we really don’t need a faction system. 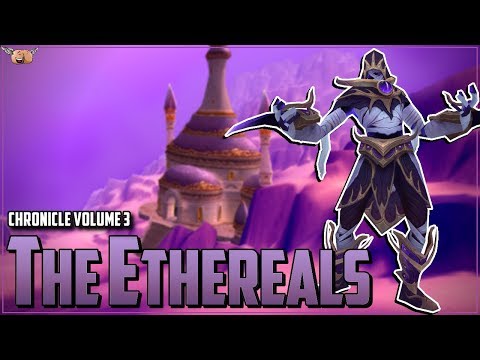 Why does it have to be always the Horde to get the best races? Let them have something good as well, otherwise we really don’t need a faction system.

I never said that the Horde should have all good races? I literally said that the Alliance needs good races, I just don’t think the sethrak is a good fit for them.
I’d personally add Arakkoa (with posture option for the broken/unbroken aesthetic) since they make a ton more sense on the Alliance due to their Ogre and Orc hate. Not to mention the Ethereals, they will do anything for money, not to mention their connection with the void elves, which makes them a perfect fit for the Alliance.
I’d add races that currently do not lean towards any particular faction to the Alliance like the Saberon, the Saurok, the Mogu. All are good non-human candidates that do not currently lean towards any particular faction.

Not to mention races already allied to the faction like the Jinyu/Ankoan which could look very cool with updated models.

I really really hope it isn’t Sethrak. Blah blah, they do fit the definition of a fantasy race. I just like lizardmen (Saurok? Iksar?) better. Because a snake with legs and arms is no snake at all. If that was a monster and I was DM I’d never want to use it for that reason alone.

Naga are more effectively serpentine because they don’t have legs. So Sethrak are just a lizardman with a goofy out of proportion neck. I wouldn’t care if they put them in necessarily because I already refuse to unlock KT and Nightborne I have so little interest in those. I just feel like there are probably only so many races we will get and another one I will never play would feel like a waste.

I would play a Saurok though. And I will play a Dracthyr. I’ve liked monstrous characters the best since I first DM’d D&D and had the monster manual to draw from instead of the player’s handbook. By the time I was a player I was almost always making something from the MM work as a PC. I had a bird man, numerous lizard men, a cat person, and several Mantis men. I have the Werewolf RPG just because I like reading the lore in the books, I’ve never actually played it.

And those are just the ones that immediately spring to mind after 20+ years of not roleplaying.

If we take that “leak” at face value and that it is only one race, likely neutral, I could see it being either Sethrak or Tuskarr. I’d be happy for either, myself.

I would play a Saurok though.

If you’re interested in playable Saurok, I do run the Saurok megathread here:

Welcome to the Unofficial Saurok Playable Race Discussion Megathread! [A tribe of Saurok have sent an ambassador to visit Orgrimmar in hopes of joining the Horde. How exciting!] Update 4/29/22: Edited the class section some, since a recent interview with Brian Holinka confirmed that Mages, Priests, and Rogues would be available for all races in 10.0 (aside from Dracthyr). Also planning a revamp of some sections in the near future! I am unsure if there is a time limit or a limit on the number …

Lizardmen are my favorite fantasy race and I try to show off how awesome playable Horde Saurok would be. It would be a dream come true if we ever see them become a playable Horde race!

What is it with you Alliance-players and the constant yearning for humans?

you are an alliance player

they are darn cute. havent seen a female tho.

Blizzard did confirm that in Dragonflight Tuskarr are getting female and child models.

Blizzard is spending a lot of time and energy getting the Dracthyr right, going so far as discontinuing any customization for any existing races and focusing all those resources on the new race. They are one of the flagship features of Dragonflight and I can’t see them putting in any new races against them that may steal their thunder. My guess is the AR we’re getting with pre-order is simply early access to the Dracthyr.

But it’s already confirmed that Dracthyr will come with pre-patch (2 weeks early like Demon Hunters were).

Pre-order perks will be long before that. So if we do indeed see an AR pre-order like BFA allied race pre-order, it will have to be something else.

The Alliance needs a “win”-race for once. Give them the Sethrak

Why ? The ones both sides fought agaist were the enemies of the Vulpera and the ones that we quested with on both sides were friendly with the Vulpera . So I don’t see those ones joining side and the Faithless ones that both Horde and Alliance killed while questing , why would they join either side ?

Thanks for getting the reference XD

Yep. alliance helped them all too.

We need no lore here. its bad anyway.

Tyrande was meany to me. So first arcanist (months later)…see you jsut had that nice meeting with sylvanas. she shot a dude for doing the right thing. He gave up the body…since it was kind of wrong to rez him to make him a bomb. then she killed the forsaken.

so…happy you chose the nice banshee who just basically said if you cross me you die? I mean tyrande was at least upfront. and well…you and your people have basically did everything she was on about. dead tree…you all hit a poorly defended hamlet and speared farmers to walls. Good job! She said you’d act stupid and guess what…you did.

HMT…they are horde for one reason. alliance didn’t have them over for dinner. as alliance can kill void tentacles too lol.

Sethrak for the horde. alliance can get leper gnomes

I still say naga. for all. their are ties to blood elves via kael and/or the hero champion mall walker DH’s out there.

I mean lets break it down. each side has …

lets go for broke and bring in the corrupted even before fel night elf now snake people freaks.

I want all to share in this goodness…so both factions

Clearly the only correct answer to save WoW is gnolls.

Honestly Yusssss. I love their new models so much. I’ve wanted playable gnolls forever. I see it as a potential post DF, so long as there’s some semblance of lore or inklings created to allow it.

Aliiance can get Tuskarr and Horde can get Gnolls =D

Honestly, for me at least, it’s my desire for a full blown fantasyified Norse culture race (horned helmets, mead horns, ect). However I understand that this would not fit as a “win race” (personally I’d add vrykul to the alliance when horde gets ogres, since both are ancestor races to the main race of each faction)

Sethrak would be a very interesting choice honestly, and I’d definitely roll one as an alt, I just doubt they’d fit as an allied race considering their unique animation skeleton and the fact that they are a creature model (like Legion era nightborne npcs or tol’vir) so they’d need a lot of work to be made playable . . . maybe as their own core race perhaps (again I’m down for it)

go to the sandy desert.
obvserve the vulpera wagons ordained with fox tails.
They hunt there own kind.

Please? Not asking for much. Want my Chamberlain Paladin and Water gobbo.