Gonna be real. This is pretty funny to me. “We want to win so badly that we are making our club exclusive again.”

That horde dude who linked the server on the forums made it so packed.

He basically just advertised it for the alliance

As long as you get the pvp gear it isn’t like you are just automatically dead. It definitely isn’t like TBC though where the gear actually mitigates what raiding gear can achieve.

I hate gnome with might of menetil! I hate them ! Why !?!

Yeah, gnome mages are my favorite target on my druid.

I missed your quirky comments Boeuff, I haven’t seen you post or on the Discord in awhile. Not relevant here I know.

Translation: Boeuff did an AV and the alliance summoned Ivus. The horde were able to kill Ivus, push back and win. The horde were calling him a commander since it sounds like took lead. He was also getting good heals so he’s thanking his healers and he says people should protect their healers (tbh this is good advice).

At least that’s what I’m reading.

Please refer back to the blue post explaining what Blizzard intended for AV queues and realize that what you are doing directly circumvents this.

We’ve prepared a collection of improvements that we’re going to make to Alterac Valley in WoW Classic over the next few days. Our goal is to make surgical adjustments that address some of the more prominent pain points and unfortunate behaviors, without cracking open the substance of the battleground. As Soon As Possible We’re working on a hotfix that will go live soon that will make honorless targets unlootable. This is intended to further discourage camping the starting caves as an efficient…

Specifically spawn camping, dropping queues, syncing queues; all of these are referred to in the above blue post.

Additionally spawn camping for extended periods (past 10 kills/player) is against the battleground objectives and is strictly griefing.

Griefing or intentionally diminishing the experience of other players is against Blizzards terms of service.

Rationalizing it does not make it right.

Please refer back to the blue post explaining what Blizzard intended for AV queues and realize that what you are doing directly circumvents this.

Specifically spawn camping, dropping queues, syncing queues; all of these are referred to in the above blue post.

Additionally spawn camping for extended periods (past 10 kills/player) is against the battleground objectives and is strictly griefing.

Griefing or intentionally diminishing the experience of other players is against Blizzards terms of service.

Rationalizing it does not make it right.

But the truth is, certain airheads in Irvine clearly do not know how to make wise decisions that benefit the health of the game.

If they did, retail wouldn’t be as this popular as classic now, would it?

Imagine nerfing an entire faction because of pettty complaints about not being able to fight a co-ordinated group as the other faction who already enjoys a superior race, map, and population advantage.

I don’t know which is worse. The incessant ramblings of a ten tear old stomping their foot demanding for an easy victory or the airheads at Irvine who actually believes this and allows this to happen.

This is world of warcraft. Not some teletubbies sitcom lovecraft-spinoff.

If I see an enemy player in a BG like you I will kill it.

If I can camp the graveyard repeatedly to prevent certain insects from backcapping bases and to secure a victory, I will do it.

Blizzard has come out with some ridiculous statements, but this was the most absurd of them all.

For well over a DECADE players have been spawn camping in EVERY SINGLE BG. Every.Single.One. Horde and Alliance alike. Now it’s suddenly griefing? No, babe, it isn’t.

After this statement was made, players asked over and over again if camping spawn points in WSG or AB was griefing. And guess what? We never heard another word.

What happened here is some blues had their Horde toons camped by the Alliance queue syncers and got their jimmies rustled. They rushed to grab their mighty keyboards and pounded this out. Haven’t heard anything since.

Camping gy’s has never, ever, ever been considered griefing. Ever.

I’m just waiting for blizzard to disable/filter URL links in chat only during Battlegrounds.

Yea im sure they wont allow discord links in WOW.

You know the thing Blizzard is PARTNERED with…

No one is linking the discord in the AV…

This discord is already set up with 600+ alliance…

People are in groups on all servers, queing in the disc, then their que pops they call it out, all the people who got into that AV go into their own channel.

You dont even understand whats going on yet youre trying to remove it. 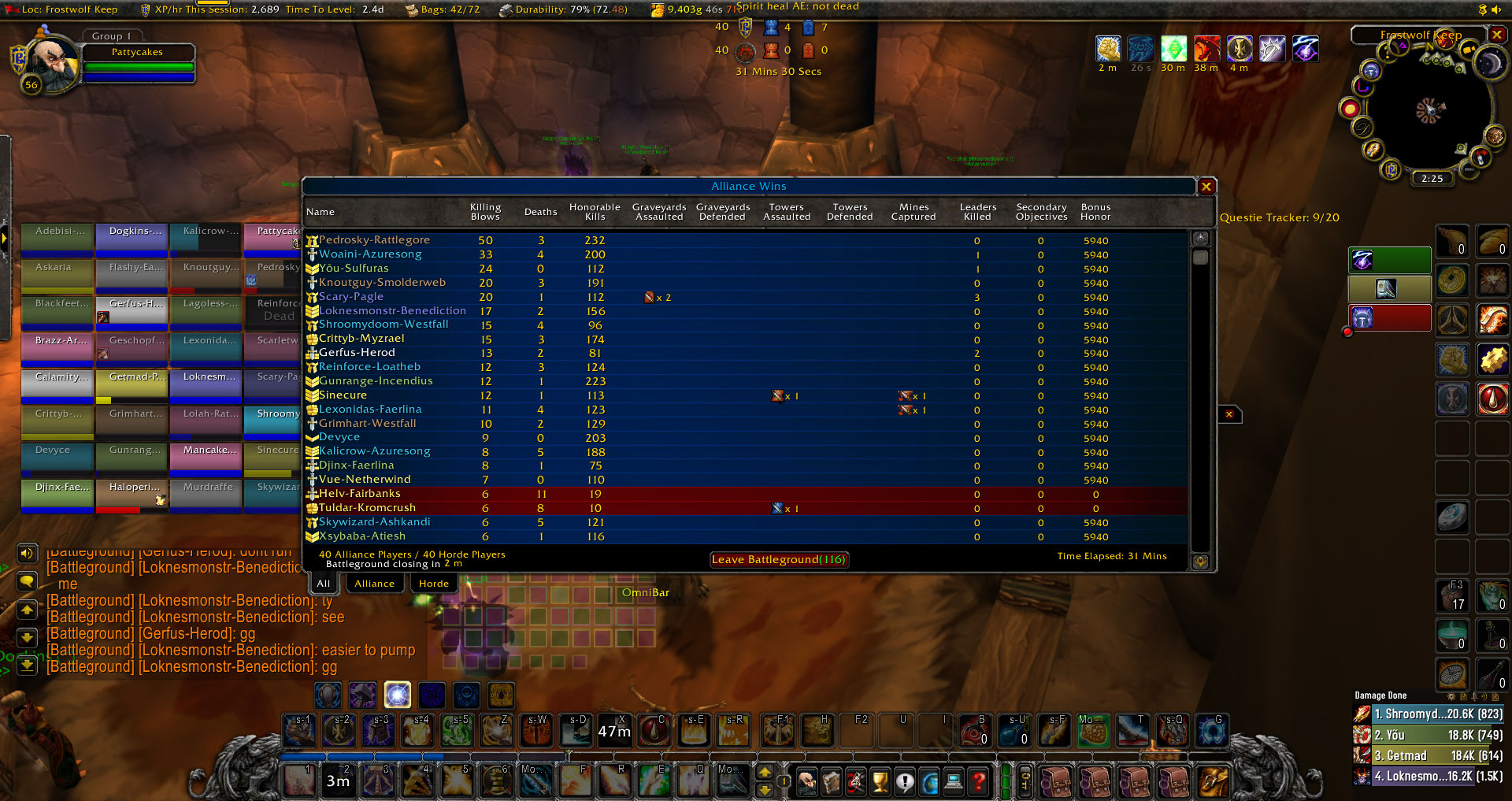 Love the screenshots, it seems to make the horde even crustier.

60 tonight then some AVs!

Nice then Horde can accuse you of being one of those T3 cheaters ganking them at their own cave.

Ima be in greens!

But those might of menethil warriors i freedom arent!

HAHA I went to BoP one of our warriors on Heigan this week but hit my BoF keybind by accident. At least his movement wasn’t impaired as he died